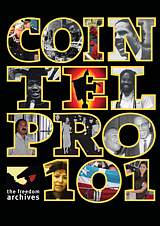 The Grand Rapids Industrial Workers of the World (IWW) and The Bloom Collective are co-sponsoring a screening of the film COINTELPRO 101 on Thursday, June 16 at 7:00pm at the IATSE Hall (931 Bridge St. NW).

The description from the filmmakers:

COINTELPRO 101 is a 56-minute educational film that will open the door to understanding this history. This documentary will introduce viewers new to this history to the basics and direct them to other resources where they can learn more. The intended audiences are the generations that did not experience the social justice movements of the sixties and seventies.

COINTELPRO may not be a well-understood acronym but its meaning and continuing impact are absolutely central to understanding the government’s wars and repression against progressive movements. COINTELPRO represents the state’s strategy to prevent movements and communities from overturning white supremacy and creating racial justice. COINTELPRO is both a formal program of the FBI and a term frequently used to describe a conspiracy among government agencies—local, state, and federal—to destroy movements for self-determination and liberation for Black, Brown, Asian, and Indigenous struggles, as well as mount an institutionalized attack against allies of these movements and other progressive organizations.

It’s also important to remember that this type of surveillance and disruption of social movements did not end with COINTELPRO. In recent years, law enforcement has infiltrated the antiwar movement (including here in Grand Rapids) while using undercover officers to setup activists in the environmental movement and at the Republican National Convention (RNC) in 2008.

Watch the trailer for COINTELPRO 101: