A Good Introduction to Anarchism 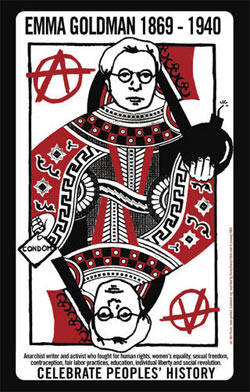 We’re always excited to see efforts aimed at exposing new people to anarchism and explaining the concepts to new folks. After all, if we can’t do that, we’re not going to get very far.

Recently anarchist writer Uri Gordon (who published a good primer on anarchist theory called Anarchy Alive! a few years back) authored an excellent short introduction to anarchism called “Anarchism: The A Word” for The New Internationalist. It provides a solid introduction looking at the basic principles of anarchism, the “classical” period of anarchist thought and action (in the late 1800s through the early 1900s), and the more recent revival of anarchist ideas and practice.

Anarchists want a social order without rulers or hierarchy. Anarchists want freedom and equality for all. We want a world with no borders and no social classes, no gods and no masters, where power is as decentralized as possible and every individual and community can determine their own destiny. We believe in independent thought, international solidarity, voluntary association and mutual aid. This is why we seek the abolition of capitalism and the state, which place economic and political power in the hands of a tiny minority. It is why we resist patriarchy, white supremacy, compulsory heterosexuality and all other systems of domination and discrimination. And it is, I suspect, why so many teachers, corporate journalists, clergy, business people and police work so hard at hiding our values from the general public.

What also distinguishes anarchists is a strong commitment to being the change we want to see in the world. This approach, sometimes called ‘prefigurative politics’, is evident in decentralized organization, decision-making by consensus, respect for differing opinions and an overall emphasis on the process as well as the outcomes of activism. It is also the motivation for our constant effort to deprogramme ourselves and overcome behaviours and prejudices that are sexist, racist, homophobic, consumerist and conformist. As anarchists we explicitly try to be and live what we want, not just as end goals, but as guides to political action and everyday life.

The article also highlights some examples of anarchist practice:

Today the anarchist movement is a mature global network of activist collectives, involved in any number of struggles and constructive projects – from resistance to mining in Indonesia and anti-nuclear action in Germany, through solidarity with Palestinians in the West Bank and communal farming in France, and on to climate campaigning in Britain and labour struggles in South Africa. Anarchists also participate in, and are often the main organizers of, projects and campaigns which have a much broader appeal – research groups who monitor the corporate world or international institutions, local economic initiatives, women’s health collectives, non-profit bicycle workshops, public art projects… The number of anarchist publications, bookfairs and websites is rising every year, as is the geographical, cultural and age diversity among anarchists themselves.

It’s refreshing to see an introduction to anarchism that is easy to understand, geared to the present reality, and not full of subcultural references.