Following up on the general strike in Oakland, there has been some anti-anarchist sentiment expressed among folks in Occupy Oakland. In most cases, it seems that much of the criticism has focused on some anarchists’ use of property destruction, although some people have criticized anarchists as “taking advantage” of the occupation.

In response, a group of anarchists (via a Bay Area Anarchist General Assembly) put out a document aimed at clarifying what anarchism is for folks at Occupy Oakland. The text is good so we’re reproducing it here:

After the events of November 2nd and 3rd we have seen the government, the corporate media, and even some of our comrades within the Occupy Oakland camp make “anarchists” the scapegoats for actions they disagree with, and we’ve heard that “anarchists” take advantage of the Occupy movement without “being a part of it.” However, many essential aspects of the Occupy movement are based on anarchist principles and build upon years of anarchist organizing. To clear up any confusion, we, various individuals who participate in the anarchist community, offer this explanation of anarchist principles to prevent confusion and ignorance from defining us and dividing the solidarity of our Occupy Oakland camp.

Anarchism is a revolutionary political philosophy, theory, and way of living that strives toward a freer and equal society without government, authority, domination, capitalism, or oppression. Key to the anarchist analysis is its unflinching criticism of authority, or of some people holding established power over others. The word anarchy comes from the Greek words, αν (an), αρχη (arkhê), and means without authority or government. Anarchism considers government in any form (from false democracy to state communism) unnecessary, harmful, and undesirable―we advocate for the self-management of society and reject the State form. The General Assemblies and committees within Occupy are experiments in this kind of self-management. But anarchism has always been an idea open to change, transforming itself in theory and practice as it grows.

From a philosophy of freedom and equality, almost all anarchists extend the analysis against government authority to reject oppression, exploitation or any situation where some people hold established power over others. As such, anarchists stand against economic forms of domination like capitalism, private property, and any system that places profits over people. It follows that anarchists oppose interpersonal oppressions such as racism, sexism, ageism, and homophobia. In accordance with these values, anarchists strive to build personal relationships free of domination. Thus, anarchists emphasize self-governance, organize without leaders, and embrace a diversity of opinions and actions.

In fact, several Occupy Oakland GA resolutions are based on anarchist ideas and actions, including:

The word “anarchy” is often misused in the place of “violence”, “chaos” or “disorder” by both the ignorant and those interested in distorting the truth. Historically, social ideas like anarchism have inspired people to action of many types, from tactics such as property damage, to strategies like self-education and even armed revolutionary self-defense. However, violence is not part of the definition of what it is to be an anarchist, and it is important to be able to separate the two.

The flip side of this flyer illustrates how many anarchist principles are put into action throughout Occupy Oakland. For more info, we suggest you do your own research. Searching anarchism on wikipedia might be a good starting point, it contains many useful links. We also encourage conversation with various folks who identify as anarchists at the occupation and elsewhere.

The illustration of anarchist principles in action: 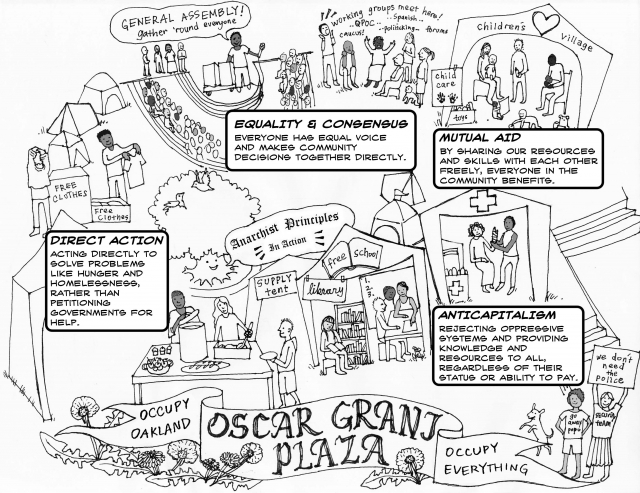