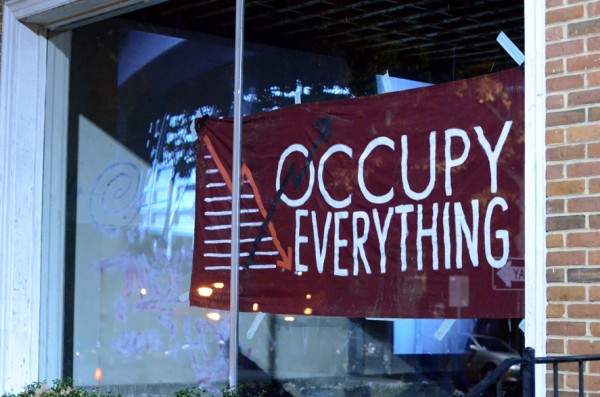 Over the past week, we’ve been heartened to learn that in some cities components of the “occupy” phenomenon are moving beyond occupying public spaces such as parks and are beginning to tentatively occupy unused and/or abandoned buildings. In the past week, Seattle, Chapel Hill, Washington D.C.,and St. Louis have all seen building occupations. While they have been short-lived, they offer a potential path forward and show how inspiration – in this case the occupation of a building in Oakland during the General Strike earlier this month – can spread energy across the country and can build off what happens elsewhere.

Folks occupying the building in Chapel Hill issued a statement that explains why they chose to occupy an abandonded building and why they see it as a potential way forward. It’s definitely worth reading, so it is reprinted here:

For the past month and a half, thousands of people all over the US have been occupying public space in protest of economic inequality and hopelessness. This itself began as an experiment in a small park in New York City, though it did not emerge out of a vacuum: Occupy Wall St. “made sense” because of the rebels of Cairo, because of the indignados of Madrid and Barcelona and Athens. All of these rebellions were experiments in self-organization which emerged out of their own specific contexts, their own histories of struggle and revolution. Each were unique, but also united by the shared reality of the failure and decline of late global capitalism, and the futility of electoral politics.

Recently, this “Occupy” phenomenon has expanded beyond merely “providing a space for dialogue” to become a diverse movement actively seeking to shift the social terrain. From strikes and building occupations to marches and port blockades, this looks different in different places, as it should, but one thing is clear: Many are no longer content with “speaking truth to power,” for they understand that power does not listen.

Toward that end, we offer this building occupation as an experiment, as a possible way forward. For decades, occupied buildings have been a foundation for social movements around the world. In places as diverse as Brazil, South Africa, Spain, Mexico, and Germany, just to mention a few, they offer free spaces for everything from health clinics and daycare to urban gardening, theaters, and radical libraries. They are reclaimed spaces, taken back from wealthy landowners or slumlords, offered to the community as liberated space.

All across the US thousands upon thousands of commercial and residential spaces sit empty while more and more people are forced to sleep in the streets, or driven deep into poverty while trying to pay rent that increases without end. Chapel Hill is no different: this building has sat empty for years, gathering dust and equity for a lazy landlord hundreds of miles away, while rents in our town skyrocket beyond any service workers’ ability to pay them, while the homeless spend their nights in the cold, while gentrification makes profits for developers right up the street.

For these reasons, we see this occupation as a logical next step, both specific to the rent crisis in this city as well as generally for occupations nationwide. This is not an action orchestrated by Occupy Chapel Hill, but we invite any and all occupiers, workers, unemployed, or homeless folks to join us in figuring out what this space could be. We offer this “tour guide” merely as one possible blueprint among many, for the purpose of brainstorming the hundreds of uses to which such a building could be put to once freed from the stranglehold of rent.

In Love and Rage,

for liberty and equality,

Sadly, the occupation was evicted at gunpoint a day after the building was seized. In response, the group quickly organized a solidarity march and benefit show to support the arrestees. Anti-capitalist occupiers were also quick to point out that the Chapel Hill Police Department has a long history of violence.

For a detailed write-up on the Chapel Hill occupation, check out “Breaking and Entering a New World” by Crimethinc.