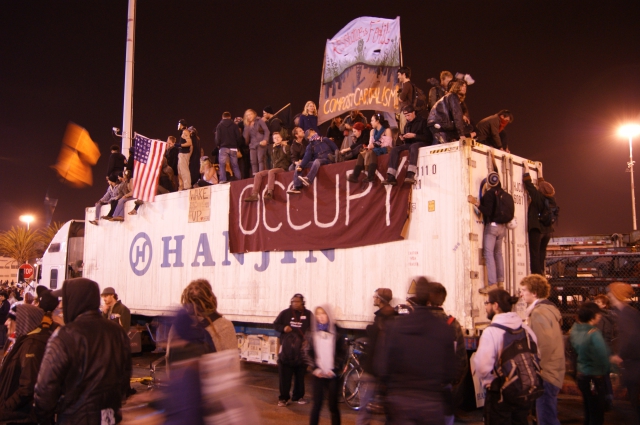 As Occupy camps across the country were evicted and the movement becomes somewhat stagnant, the West Coast is once again bringing fresh ideas to the forefront. On Monday, Occupy groups in Portland, Oakland, Seattle, and others coordinated a “West Coast Port Blockade” to “Shut Down Wall Street On The Water Front.” The actions were billed as an attempt to give Occupy a boost of energy and to shift in more strategic directions.

Most immediately, the efforts were a success with ports in Oakland, Seattle, Longview, and Los Angeles being shutdown for varying amounts of time. In addition to the blockades, groups in the Northwest also tried different tactics including a rail blockade and vandalizing a police station.

To put the shutdown in context, we strongly encourage folks to check out the essay “Blockading the Ports Is Only The First Of Many Last Resorts” from the website Bay Of Rage. Its a good theoretical overview of how the port blockades fit into a new mode of struggle that is breaking with past forms of struggle (such as “class struggle” and unions). Of the November 2nd general strike, the essay states:

“When tens of thousands of people marched to the port of Oakland on November 2nd in order to shut it down, by and large they did not do it to defend the jurisdiction of the ILWU, or to take a stand against union-busting (most people were, it appears, ignorant of these contexts). They did it because they hate the present-day economy, because they hate capitalism, and because the ports are one of the most obvious linkages in the web of misery in which we are all caught. Let’s recognize this antagonism for what it is, and not dress it up in the costumes and ideologies of a bygone world.”