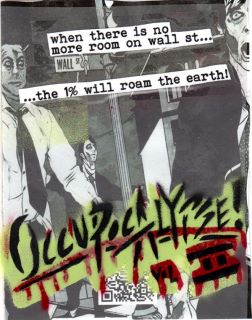 Over the weekend, we picked up a copy of an interesting zine from here in Grand Rapids called “Occupocalypse!” The zine bills itself as an “unofficial project” of some participants in Occupy Grand Rapids.

While being quite clear that it doesn’t represent the “views, opinions, attitudes, or desires” of Occupy Grand Rapids as a group, we were nevertheless pretty surprised by the content. Much of the zine talks about anarchism specifically and generally has an anarchist spirit running throughout. There are strong critiques of the idea that there are “good old days” to return to (as some of the more reformist elements in the Occupy phenomenon talk about) and the limited options offered to us in this society. Most intriguing of all is that the zine even has a bit of an anti-civilization trajectory, with several pieces talking about a post-civilization world and anarcho-primitivism.

Of course, for us, the question is how the people doing this zine make actualize their politics within the context of Occupy Grand Rapids. Aside from the General Assembly (GA) process, you don’t really hear or see much about anarchism or anarchy coming out of Occupy Grand Rapids. Instead, it seems that the voices calling for limited and reformist goals: amending the Constitution or moving money from a “big” bank to a credit union are by far the loudest. Hopefully, this zine is a sign of things to come.

The zine is available online, otherwise try contacting Occupy Grand Rapids to get a print copy.