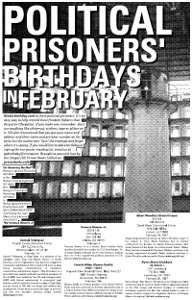 The February political prisoners birthday calendar is out. As always, please take a moment to send a quick birthday card or note to one or all of the prisoners on this month’s calendar. It’s an easy way to send support to those that the state has stolen from us.