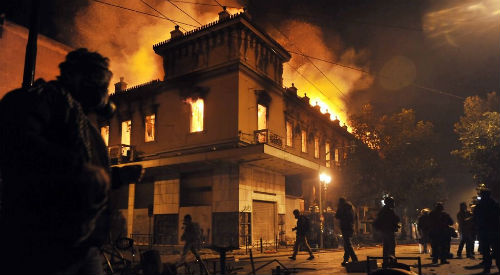 A couple weeks ago, we posted a few short videos exploring anarchism in Greece. Since that time, things have gotten pretty crazy in Greece. There was 48-hour general strike in response to a Eurozone bailout agreement that promises further austerity measures.

Hundreds of thousands of people participated in the General Strike and last night there were running street battles in Athens outside of parliament as Greek legislators voted to approve the agreement. According to the police, as many as forty-five buildings had fire damage with several banks being burned to the ground. Numerous buildings were also occupied, including the Athens Law School.

Occupied London has good coverage of the protests (folks should also check out ContraInfo), with an overview of what has happened during the general strike and a summary of last night’s events. From the summary posted there:

“There are various estimations about the number of the people concentrated on the streets and squares of the country. Athens had anything over 500,000 people on the streets, it is not easy to estimate it, but before the attack of the police every street leading to Syntagma and the square were packed, with thousands more coming from the neighbourhoods on foot or by buses and trains. Half an hour before the demo one could see the metro stations and the bus stops full of people waiting to get on a vehicle that would bring them to the centre. Every city saw rallies and mass marches, with Heraclion of Crete, a city that holds a record in the recent wave of suicides, having a 30,000-strong march. Demonstrations all around the country turned violent, with people destroying banks or occupying governmental buildings, e.g. in Volos the branch of Eurobank, the Inland Revenue Offices and the town hall were torched or in Corfu people attacked to the offices of their region’s MPs, trashing them, the town hall of Rhodes was occupied during the demo and still is occupied, to mention but a few of such actions.

Several banks, governmental buildings and two police departments (Acropolis and Exarchia depts.) were attacked by demonstrators during the night, while Athens city hall was occupied, but police concentrated forces invaded the building and arrested the occupiers. Over 40 buildings were burnt in Athens, while occupations of public buildings still are holding all around Greece. The Law School occupation issued a statement in early morning of 13/02/2012: “It was decided by the assembly of the Law School occupation that the occupation continues. We call everyone on the streets to continue the struggle. Nothing ended, everything now starts, the Law School is a centre of the struggle and as such it will remain”.

We’d also encourage folks to check out a statement from the Law School occupation titled “In order to liberate ourselves from debt, we must destroy the economy.” It does a good job of arguing that the only way out of the “crisis” is the destruction of all forms of hierarchy, including those of the left. It concludes stating:

The only solution is social revolution. Against all the above, we propose social revolution, which we consider the only solution in order to have a life, not bare survival. This means, to rise up against any financial and political institution. It requires, through the route of revolt, to take measures such as the abolition of the state, of property and any sort of measurability, the family, the nation, exchange and social genders. In order for us to extend gratuitness and freedom across the entire social life.
This is what revolution means! Bringing to this direction any struggle centred on wage demands; any self-organised structure and assembly, especially at a conjuncture, as the present one, when the political-governmental form of the systemic crisis can lead to a social explosion.

Looking at what happened in Greece in response to the debt bailout is exciting. In situations like this, it’s always tempting to ask the proverbial “why doesn’t that happen here?” question. Aside from obvious differences in the political circumstances, there are very strong differences in how anarchists work in Greece vs. in the United States. There’s no easy answer or obvious conclusions to reach, but for folks interested in contemplating these topics, two good sources that we know of that look at how Greek anarchists organize are an interview with the VOID Network from 2009 and another article titled “How to Organize an Insurrection.” 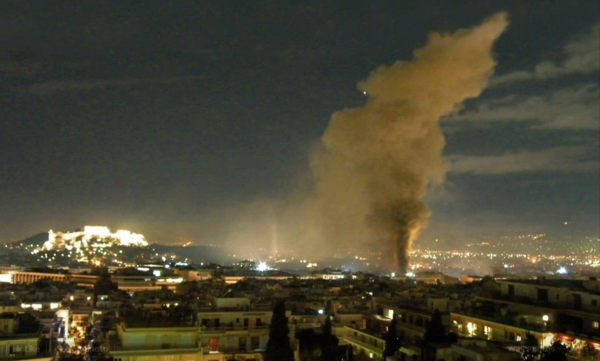