You Are Not Durruti, But We Are Uncontrollable 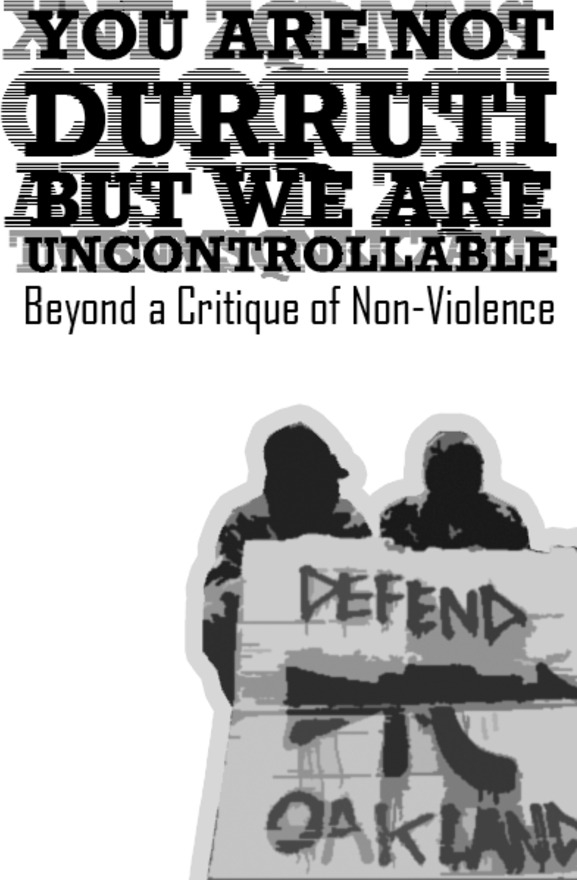 We came across a zine a while back titled “You Are Not Durruti, But We Are Uncrontrollable: Beyond a Critique of Non-violence” that we encourage folks to read.

It’s an exploration of the “Occupy” phenomenon – rooted in the experience of some folks in Oakland – and how Occupy relates to “the Left.” It starts by looking at the debate over “violence” and “non-violence” and argues that there is a more fundamental issue: whether Occupy is against the state.

The zine presents good critiques of the “99%” idea in Occupy (and concluding that people should stop using it!), the unions, the role of the Left, social movements, and the tension within Occupy between reform and revolution.

The zine summarizes what those on the Left in Occupy want:

“For the Left, (the Democratic Party, the unions, non-profits, various Marxists sects, liberals, activists, etc) the Occupy Movement then is simply a democratic, albeit directly democratic push towards reforming the state and how it manages capital. We hear talk of abolishing the federal reserve, giving more power to the unions, and stronger taxes on corporations. These are not even reforms that seek to gain concessions that might make life better for the working class; they only attempt to make capitalism ‘work better,’ or give more power to the institutions that manage the proletariat.”

By way of contrast, for anarchists:

“…we wish to completely and utterly negate all that makes us who we are as proletarians and create an entirely new way of living, meeting our needs, and actually being human. We are faced with a question of whether to build popular fronts with those that do not share our politics (albeit often begrudgingly), or to push and expand unmediated class conflict, expand social struggles, and deepen and defend insurrectionary situations. The fires lit in Oakland will not die out; the processes, experiments, and beginnings of communization will not soon be smothered. We must understand the tensions that exist in the revolutionary movement and proceed, attacking what makes us not free, taking space that we need, and forever trying to divorce ourselves from the regime of work, diving into the joy of the commune.”

You can print the zine at Zinelibrary or you can read the text.