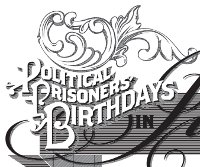 The June political prisoners birthdays poster for the Chapel Hill Prison Books Collective is out now. Please check it out and take a moment to send birthday notes to some or all of the prisoners on the list.

Also, the folks who put out the posters each month are losing their space. Please consider supporting them financially if you are able to. In their plea for support they summarized the work they have done–which makes a convincing case for supporting them:

Now in its 7th year, the Collective has sent tens of thousands of books, pamphlets, and resource guides into prisons throughout the South. We’ve published prisoners’ news, essays, fiction, and poetry; and spread word of their struggles and strategies to hundreds of different facilities in an effort to break down the isolation and indignity of prison. We’ve helped prisoners learn to read in a country where the education system has utterly failed them. We’ve sent legal materials to prisoners in prisons whose law libraries have been completely dismantled. We’ve helped prisoners form study groups that encouraged gang truce efforts and became the backbone of organizing efforts on the inside. We’ve organized demonstrations and solidarity efforts for prisoners punished for their own organizing. We’ve encouraged political prisoner letter-writing across the country. In a society that increasingly treats prisoners as mere objects: thrown away and forgotten, we’ve organized teach-ins and outreach on the outside to remind people about what happens on the inside.