On Occupying in a Midwest College Town 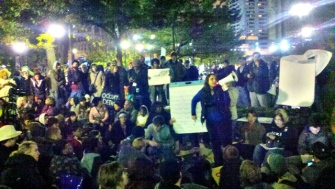 While Occupy’s time has passed both nationally and locally, a new analysis published on the Michigan-based “Third Coast Conspiracy” is worth reading for its recounting of lessons learned from Occupy organizing on one of the large college campuses in Michigan. It doesn’t limit itself to the particular failings of the Occupy, but raises much larger questions about the limits of struggles centered around “democracy” and universities.

In particular, the analysis looks at the format of the General Assembly (GA) and how the GA form functioned to limit the struggle and prevent participation from larger groups of people. Among the issues explored are the focus on “democracy,” the fetishization of process and form, and the focus on speech over action. From the analysis:

“While GAs in New York, for example, seemed to draw large numbers over long periods of time, the GAs on our campus quickly became an exhausting and draining burden. First and foremost, they were really, really long. Open conversations often take a long time and at times can end up doing little more than going over the same ground. At the same time, since we weren’t actually occupying a space on campus, participants weren’t already gathered in the same place for an indefinite period of time—folks had other places to be, struggling to find enough time to study and work to pay to study. Second, as numbers dropped at the meetings, the bureaucratic structures of the GA began to seem a little ridiculous. When there are only 20 people in a room, there simply is not a need for such a formalized structure. Given that our meeting size varied so much, planning appropriately was a problem. Third, in part because we were not holding space, our meetings tended to be unfocused. Too much time was spent discussing demands and formulating principles, and not enough on planning actions. It was frustrating to attend a three-hour GA whose purpose could not be synthesized and which often had no product. Ultimately the long, drawn out, romantically declarative GA felt like a fetishistic performance of what we imagined politics to be.”

Occupy Grand Rapids never really attracted much of a student presence nor did the colleges in the city develop Occupy groups of their own, the analysis is definitely worth reading. Many of the same problems and difficulties occurred here. Moreover the piece’s cautionary take on campus organizing is worth considering. In a city where we’ve seen lots of cheerleading for on-campus organizing by non-students and/or focus on students/colleges as sites of outreach and potential sites of struggle, the concluding paragraphs are very relevant:

“With regards to graduate students and faculty, we need to dispel the notion that your scholarship can be your activism. Participation in university-based activism means material risk for individuals whose careers are tied to the institution in such an intimate way. Many of our colleagues, while championing anticapitalist, antiracist, and feminist politics in their work, routinely fail to participate in an open struggle to change the structures that govern our lives. While our writing and research can feed, nurture, and illuminate our struggles (and vice versa), the two should not be conflated. As scholars, we need to put our bodies where our theory is.

Given the current state of student debt, a vicious administrative class, and the prevalence of idealism and creativity, we believe that university campuses are logical and essential sites of struggle. That being said, the university is a trap—only university-based struggles that aim at generalization, at escaping the university and becoming part of wider social condition of refusal (as in Quebec), will have a shot at avoiding either recuperation or reformism.”

Read the whole analysis: “The University as a Site of Struggle: On Occupying in a Midwest College Town”