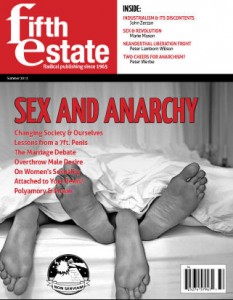 The new issue of Fifth Estate*—*the long-running anarchist publication from Michigan—is out now. The table of contents is printed below and if you are interested, please consider a subscription to support anarchist publishing. Also, editor Peter Werbe of Fifth Estate recently appeared on “Anarchy Radio” to discuss the new issue. Check out the episode if you are so inclined.

Lessons from a 7ft. Penis – A Sex Comedy Cabaret

The Marriage Debate – An Anarchist View

A Mirror in Hand – On Women’s Sexuality

Attached to Your Penis? – It’s So Limiting

A Response on Polyamory

Industrialism & Its Discontents – Luddites & Their Inheritors

Fifth Estate in Cyberspace – On the Web