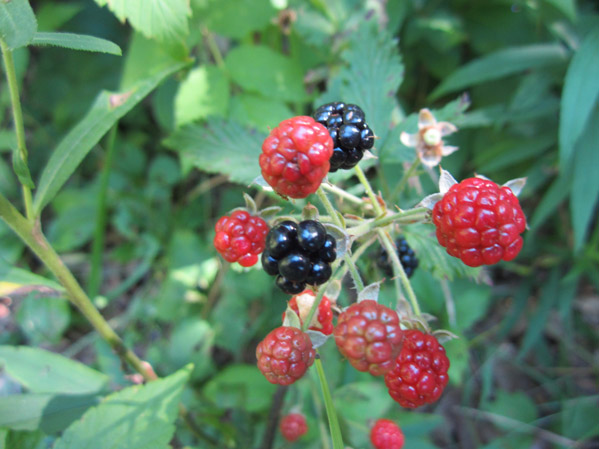 Blackberry (Rubus allegheniensis) is a well-known edible berry found across Michigan. They mature in the late summer and are a very tasty berry that can be eaten raw or cooked.

Blackberry is common in Grand Rapids and thickets of blackberry brambles can be found throughout the city. They are found on waste ground, pastures, sun-dappled woods, forest clearing, thickets, and along roads and paths.

Blackberries grow on brambles, which are sprawling vine-like shrubs. The canes (stems) grow to about a maximum of 8 feet in height, often arching and varying in size. The canes are smooth with numerous sharp thorns. Young canes are greenish or reddish in color, while older canes are brown.

The Blackberry fruit itself matures to a dark, glossy black in late summer when it is ready to eat. The fruits are about a ½ inch across. They change from red to black as they are ready.

Here’s an example of some ripe (black) and unripe (red) Blackberries:

Another key aspect of identifying a Blackberry is that the core of the Blackberry remains inside the berry when it is picked: This is different from Black Raspberries, which are distinguished by their hollow center.

Blackberry leaves are compound, doubly toothy, and coarsely textured with sharply pointed tips. Leaves alternate on prickly petioles (stemlets). Leaves of fruiting canes have 3 leaflets, while non-fruiting canes have 5. The leaves are up to 5 inches long, with the terminal leaflet being larger than the side leaves:

Blackberries can be harvested in the late summer, well after both Red and Black Raspberries. Because Blackberry brambles are covered in thorns, long-sleeve shirts and pants are recommended.

They can be eaten raw or used in pies, muffins, or to make jam. The leaves can also be dried to make tea and the young shoots can be harvested and eaten in the spring.