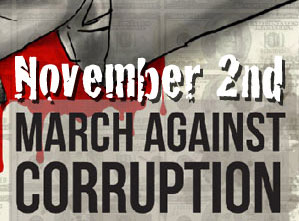 Recently calls for a nationwide “March Against Corruption” have been circulating on Facebook. According to the announcements, there will be at least a march in Grand Rapids organized by the sort of usual suspects of leftist activism: the Institute for Global Education, Move to Amend, and MoveOn.org. The goal of the march is to participate in a “day of action” against “corruption” that has been promoted heavily on the Internet. The text of the local march announcement says “Democracy is at stake! Money in politics needs to be controlled and corporate lobbying needs to regulated.” The purpose of the “day of action” is to raise awareness about money in politics and to promote a piece of legislation called “The American Anti-Corruption Act.”

Needless to say, none of this is at all interesting to anarchists and we greeted it with the usual eye-rolling. However, there’s a second event happening in Grand Rapids that had some interesting language in the description in that it tried to rally anarchist support for the event:

“Whether you’re a conservative, liberal, anarchist, libertarian, Tea Party or Occupy supporter, we can all agree on one thing: money has become an all too important factor in the US political scene. It’s time to take the money out of politics and to give the power back to the people.”

While I kind of doubt many anarchists would take this seriously, it’s a worthwhile time to remind folks that we’re anarchists because we reject the whole idea of politics. We’re opposed to representation, politics, and the state. “Power”—insomuch as that could be construed as a good thing—will never be give to “the people” as long as this system exists. Moreover, there was no time when money didn’t dominate political discourse, the system—whether it be the legislature or the police—is designed to support the elite. There is no mythical time that we can go back to when the government wasn’t an agent of domination.

Sadly, some anarchists in Grand Rapids have positioned themselves in such a way as to create the conditions for invitations like this. They’ve cast themselves as “extreme liberals” of a sort, advocating for direct action and protest in the streets while throwing their support behind progressive causes like this. They rarely speak about how they actually see things, instead seeming to operate under the assumption that all types of “action” are equally valid as long as they are vaguely “progressive” in nature. That is an error and it has contributed to confusion about our goals. We shouldn’t be playing the role of shock troops for progressive causes, we should be pursuing our own unique ends.

For anyone who is confused by this, we strongly recommend checking out a zine we published a few years back called “Anarchism: What It Is, What It Ain’t.” It’s a reprint of an article by Lawrence Jarach that provides a good overview of anarchist principles and how they differ from other political philosophies such as liberalism and socialism.