Crabapples are different from other wild apples in that they are significantly smaller and may appear at first glance to look more like berries than apples. They are bushy, medium-sized trees that grow to a maximum of 15 to 30 feet. There are hundreds of varieties of crabapples, so it is often difficult (and relatively unimportant) to identify the exact variety of the tree.

They are found in fields and thickets across the region. They begin ripening in August and last into the fall. Crabapples are popular as ornamental trees so they are readily found in more domesticated areas as well.

Crabapple trees are small with significant five-petaled blossoms (often white, but pink to pinkish white is also common). Typically these appear in late April and early May, but some varieties bloom later. These will eventually give way to fruits in the late summer and early fall. When the crabapples appear, it is easiest to identify the trees, but it is also possible to identify crabapples based on their leaves and bark. 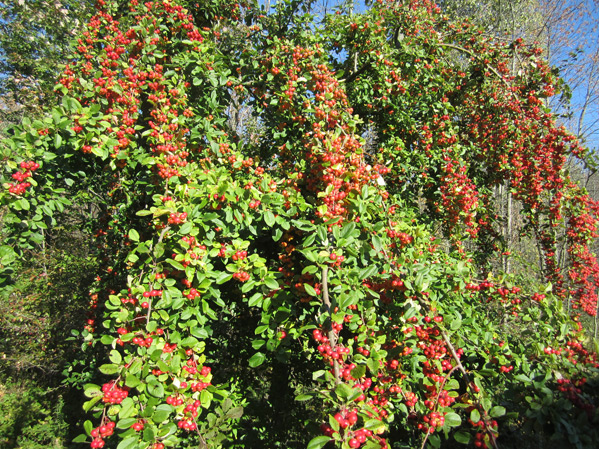 The crabapple fruit are about one to two inches in diameter with a sepal on the bottom. By cutting a fruit open along its “equator,” you can verify that they a crabapples by looking for five seeds. The crabapple fruits grow in clusters of fruits and leaves: 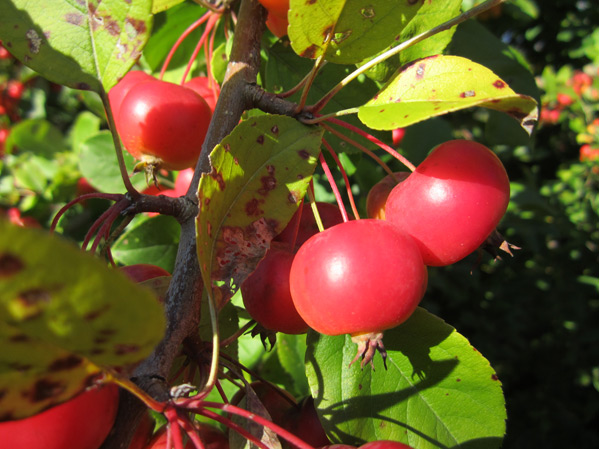 The color of crabapples can vary greatly. Some are red while others are orange or yellow.

Crabapples can be further identified by their leaves before they begin fruiting. The leaves are sharply toothed and oval in shape. Leaves are typically two to three inches long. The underside of the leaves of some species are fuzzy, while others are hairless. Leaves tend to progress from light green in the spring, to darker green in the summer, and finally orange or reddish in the fall. 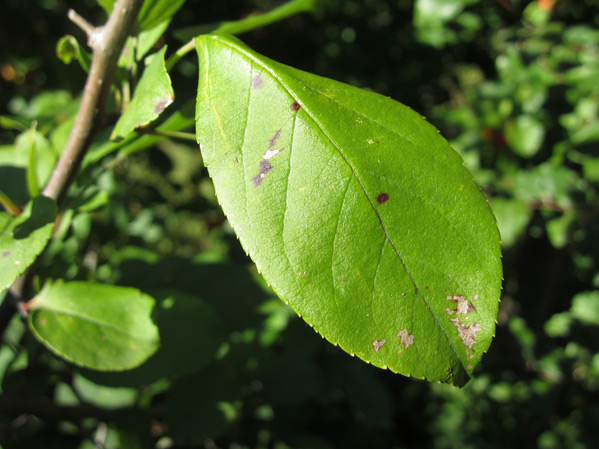 Crabapples can be picked (if they can be reached) or shaken off the tree. To check to make sure they are ripe, cut open one of the crabapples and check to see that the seeds are brown. If they are not, the crabapples are not ready.

Crabapples tend to be very tart and are often used in recipes with other ingredients to offset their tartness. Some people use them to make jellies, crabapple butter, sauce, or in baked goods.