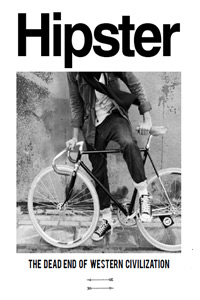 At the past couple of events we have tabled at, one of our more popular titles has been a re-print of the Adbusters article, “Hipster: The Dead End of Western Civilization.” While coming out almost five years ago, it remains one of the best critiques and explorations of the hipster phenomenon. At its most basic level, the article argues that hipsterdom has become a global phenomenon that has no meaning, signified primarily by its participants’ desire to buy empty authenticity and rebellion. Whereas other subcultures (punk, rap, hippies, etc) may have had rebellious undertones or components, hipster stands for nothing.

Reading the article, it isn’t hard to see how it describes some of what goes on in Grand Rapids. Add some newer references to Instragram and Tumblr, and you’ve got a decent description of much of what’s taking place in Grand Rapids:

Take a stroll down the street in any major North American or European city and you’ll be sure to see a speckle of fashion-conscious twentysomethings hanging about and sporting a number of predictable stylistic trademarks: skinny jeans, cotton spandex leggings, fixed-gear bikes, vintage flannel, fake eyeglasses and a keffiyeh…

Lovers of apathy and irony, hipsters are connected through a global network of blogs and shops that push forth a global vision of fashion-informed aesthetics. Loosely associated with some form of creative output, they attend art parties, take lo-fi pictures with analog cameras, ride their bikes to night clubs and sweat it up at nouveau disco-coke parties. The hipster tends to religiously blog about their daily exploits, usually while leafing through generation-defining magazines like Vice, Another Magazine and Wallpaper.

We don’t necessarily agree with everything the author writes–for example, you won’t find us bemoaning the death of western civilization–but it does make some good points and we’ll likely raise a few eyebrows when folks see it.

You can grab the PDF (imposed for printing, or the screen readable version) from us: “Hipster: The Dead End of Western Civilization” Lovingly bound in twine, of course. Complete with American Apparel font and a fixed gear bike on the cover! You’ll have to check elsewhere for your dose of hipster cultural appropriation though. If you look around town, it probably won’t be too hard to find some examples.