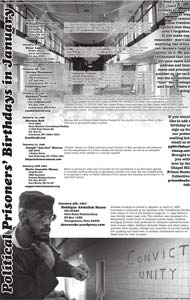 1) Here is the political prisoner birthday poster for January. This one marks the beginning of our fifth year publishing this poster every month! As always, please post this poster publicly and/or use it to start a card writing night of your own.

Some News And Updates:

2) Lynne Stewart has been released! Democracy Now! was at the airport when she arrived in New York City and has extensive video coverage of her homecoming.

3) Locally police and politicians have been working hard to cover up the murder of 17 year old Jesús ‘Chuy’ Huerta. Days after the shooting, Chuy’s family, various community members, and activists held a march that drew international attention due to the police’s absurd claims that Chuy killed himself and the ferocity of the large march. One month later the family called for a march and vigil to the site where Chuy was shot, which ended in chaos when police attacked the vigil. Predictably, the police and politicians are blaming “outside agitators” for everything while targeting youth of color for arrest. Please contribute to the bail/legal fund to help all of the arrestees of the past two demonstrations. We’re also asking for people who are able to contribute to the ‘Justice for Chuy’ memorial fund to help his family cover the costs of the funeral and all other related expenses.

4) Sekou Cinque T. M. Kambui (S/N William J. Turk) is still asking for people to contribute to a letter-writing campaign asserting his innocence in preparation for his upcoming parole hearing, which could be held as early as February of 2014. He was accused of murdering a wealthy white oil-man and a KKK member in Alabama.

5) Lastly, here is a link to the latest Political Prisoner/Prisoner Of War every-other week update by the NYC-Anarchist Black Cross. There are lots of important updates on many political prisoners.

Until Every Cage Is Empty,