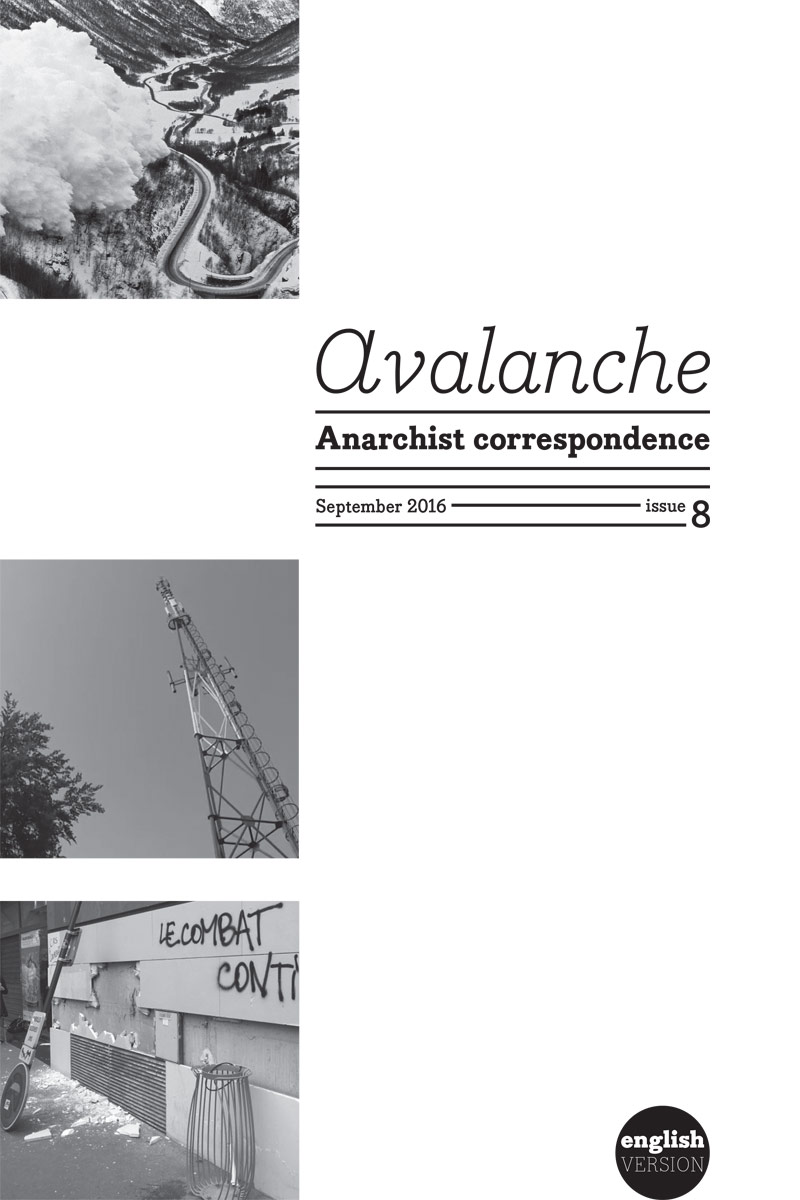 Issue #8 of “Avalanche – Anarchist Correspondence” is out now. This issue features a lengthy report on the recent uprisings in France, and writings on Mexico, Germany, and Switzerland. There’s also an assessment of the project at 2 years, as well as an announcement that it will be changing to focus more on original writings and analysis.

This issue’s editorial also raises some important questions and offers some points that merit thoughtful consideration and reflection.

Somewhat disorientated, we find ourselves facing an ambiguous and contradictory situation. When one tries to observe the world surrounding us, to analyse the evolution of the relations of exploitation and domination in the current times, one cannot but acknowledge that many “certainties” are being turned upside down. The social State, for decades the favourite model of capital to continue to generate profit and assuring at the same time relative social peace, is in full disintegration. Migration movements have taken on such dimensions that in less than a year, in certain European countries, a whole new layer of proletarians, or more precisely, excluded,has been added to the population. War, which was always present as domination is always waging war against the excluded and oppressed, came to affirm itself in a more brutal way: jihadist hits in the European metropolis, a swift militarisation of the streets of the capitals, a repressive reinforcement that won’t take a step back any more. And while everybody is called upon to take part in one way or another, the restructuring is going through phases of instability and vulnerability, the bets are taking on other dimensions.

At the same time, while the conditions of the clash are modifying, certain horizons have moved an inch. The big march forward of technological development of domination seems hardly to experience any difficulties. The programs for construction and restructuring of the unmissable infrastructures for production, consumption, control,war and alienation : new high tension lines, extension of the high speed train network and air transport, dissemination on the territory of structures, relays, antennas ever more powerful to allow the continuous flow of data and communication, exploitation of new energetic resources through fracking, the building of new pipelines for gas and petrol, of new nuclear power plants, of wind parks, of solar panel parks, of hydro-electrical dams,…And on the other hand, capital is pushing the limits of exploitation further, overcoming old contradictions and creating new ones. The research programs for nanotechnology for example are intervening on the level of the singular atom as to manipulate materials, in the biotechnology laboratories the synthetic biology is completely changing the common perception of the organic and the living, ever more faster computers are allowing research programs which need enormous capacities for calculation(and of which the results will become fearsome tools for the perpetuation of order) on genetics, DNA, the mapping of the human brain, the real world dimension analysis (through the date generated by information and communication technologies) of human behaviour.

Facing this contradictory and ambiguous situation, between modification and continuity, disorientation is not only hitting the exploited and the excluded (sinking away in confusion, loosing any point of reference that is not created by domination, adhering to apocalyptic religious sectarianisms), it is also hitting the anarchists…