Zines and Pamphlets Published in December 2016

This is our monthly round-up of zines and pamphlets published by a wide range of projects within the broad anarchist space during December.

This month, we were particularly moved by some words printed in the latest issue of the Transmetroplitan Review, an anarchist newspaper from the northwest. They gave a great synopsis of the importance of anarchist print media – such as the zines included in this blog post – as well as offering some brief words on how to produce an anarchist print publication.

By way of an introduction, we are reprinting it here:

“Printed newspapers fill an important role in anarchist praxis and have been in existence since anarchism became a coherent movement. For example, after the Great Earthquake of 1906 leveled his San Francisco printshop, an anarchist named Eugene Travaglio eventually drifted into the Pacific Northwest. As his third wife Esther Travaglio recounted to Paul Avrich:

“[Eugene] became foreman in the printing shop of The Pacific Monthly [in Portland], edited by C.E.S. Wood. Soon afterwards, he moved to Tacoma and started his journal Why? He often visited the Home Colony [in Home, Washington] and was fluent in Esperanto, which I think he may have learned at Home. His first wife, Frankie, moved up to Home to be near him, and [their daughter] Leah married Ray LaVene at Home. He loved Home and visited the place often. In Tacoma Gene worked at night and then walked home about four miles. He became foreman at the Wobbly print shop. He knew Sam Hammersmark and the other anarchists and Wobblies well. Gene moved up to Seattle and started a small print shop called the Olympic Press. That’s where I met him in 1924.”

In 2017, an effective anarchist print shop requires no more than $500.00 to establish. A double-sided color printer with enough toner for 4000 copies will cost no more than this. After that the only costs are electricity and toner. Printing is no longer specialized as it was in 1906. While the predominance of digital media might deter some anarchist from engaging in the classical practice, we assure you that it is well worth it. Never underestimate the power of the printed word in this time of emptiness and horror. Speak what you believe clearly and at every prompting. Write it on paper, write it on walls, spread the great idea of anarchism across this blighted and collapsing state. There has never been a more important time than now.”

As always, we encourage folks to copy and distribute the zines and pamphlets highlighted below, to use them to form reading/discussion groups, and most importantly, to use them to spur further action.

Zines and Pamphlets Published in December 2016

War in the Streets: Tactical Lessons from the Global Civil War, Vol. 1 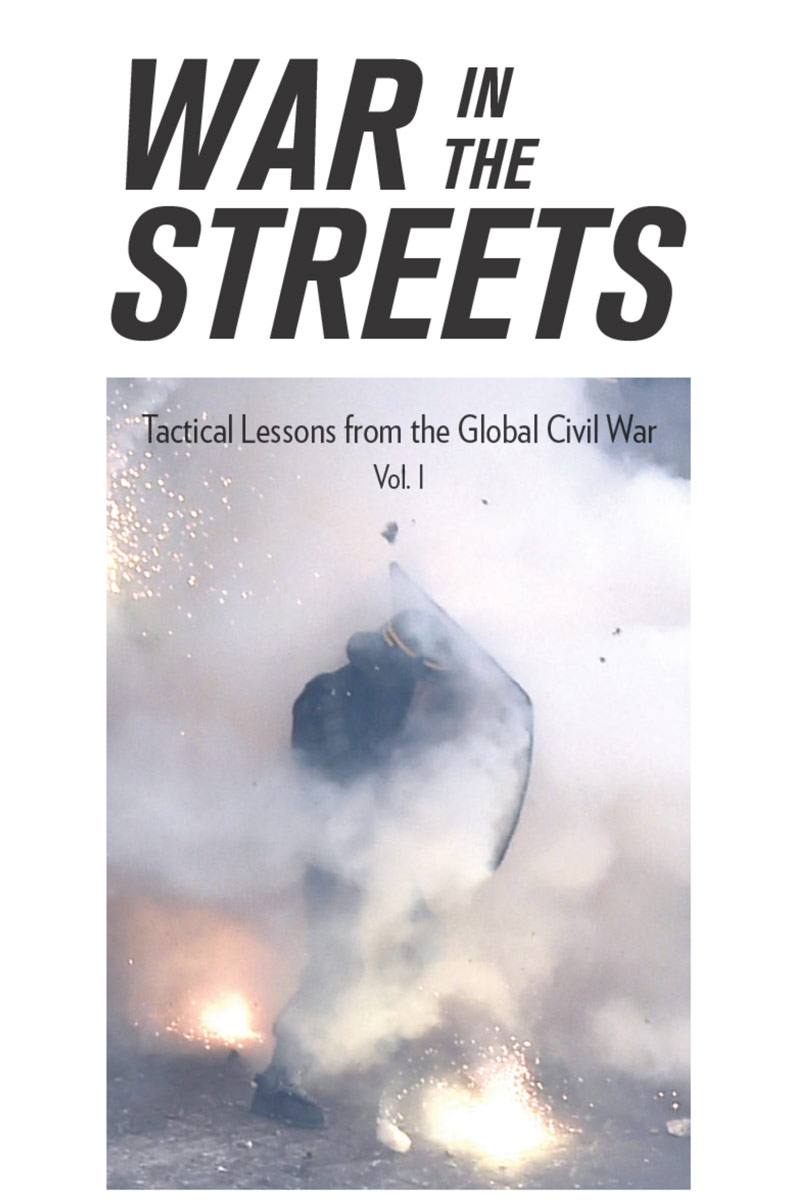 This zine is a collection of essays reflecting on street tactics, specifically those associated with the black bloc. The preface gives a good summary:

“The idea for this zine was to collect a series of situated and intelligent reflections on black blocs, street clashes and related tactics of confrontation. Each of the texts collected here tries to spell out in concrete ways what seems like it has worked and what hasn’t, while trying to be clear about how each tactic relates to the larger insurrectional process.

The essays were published in various sources between the years 2010 and 2016.

Tear Down the Bastille #6 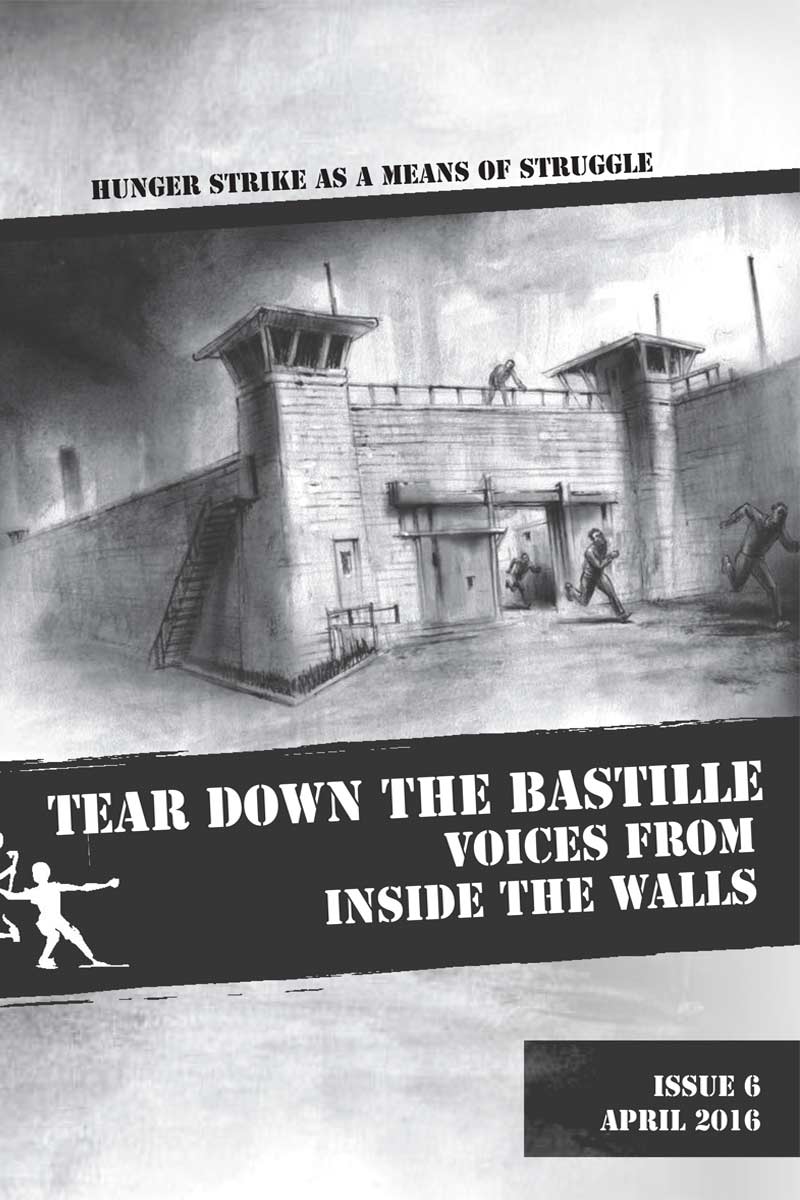 This zine comes from Greece and was made available online for the first time last month. It collects texts from various prisoners inside prisons in Greece. All of the texts address the “hunger strike” tactic, offering thoughts and reflections on its practice and efficacy.

“This specific issue refers to hunger strike as a means of struggle, a matter that has intensely concerned not only those directly involved but also those in solidarity, as well as a large part of Greek society. A hunger strike, as a means of struggle, was never a desperate move, or simply a “peaceful” protest in order to project the victimization of the hunger striker and extract sensitivity and charity. It is a conscious struggle, where the coordination of those inside and outside is a necessary condition in order for there to be a result, but also to maintain the strengths of those fighting.” 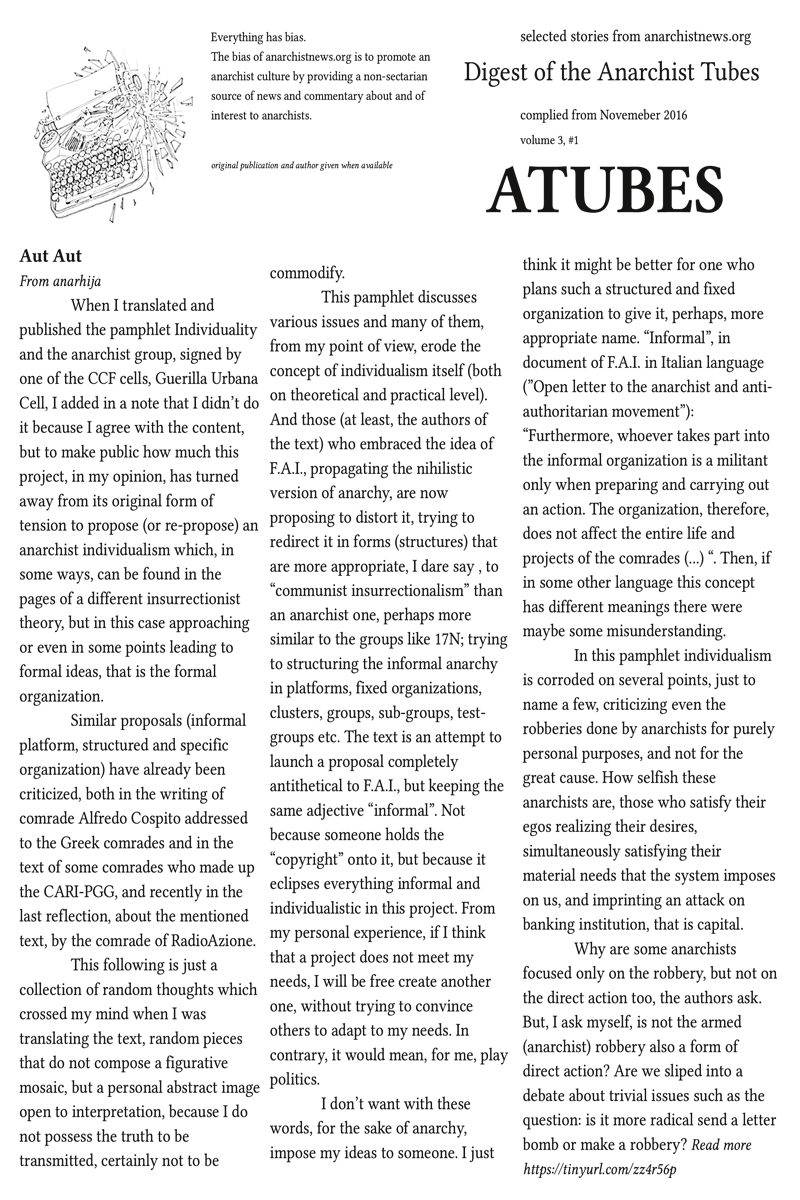 This is the latest issue of the irregularly produced ATUBES zine from the crew that runs Anarchistnews.org. It collects several articles recently published on the site and presents them in an easier to read (at least for those who don’t enjoy reading on a screen) format. The pieces included this time around include “On Antifa: Some Critical Notes,” “Red November, Black November” on the 2016 election in the U.S., the “No Peaceful Transition” call to action, “Aut Aut”, and “Monica & Francisco: Distance, Control, and Punishment”. It’s an interesting experiment in moving from screen to print-based consumption of anarchist news and analysis.

Against Identity EVROPA, Against the Alt Right 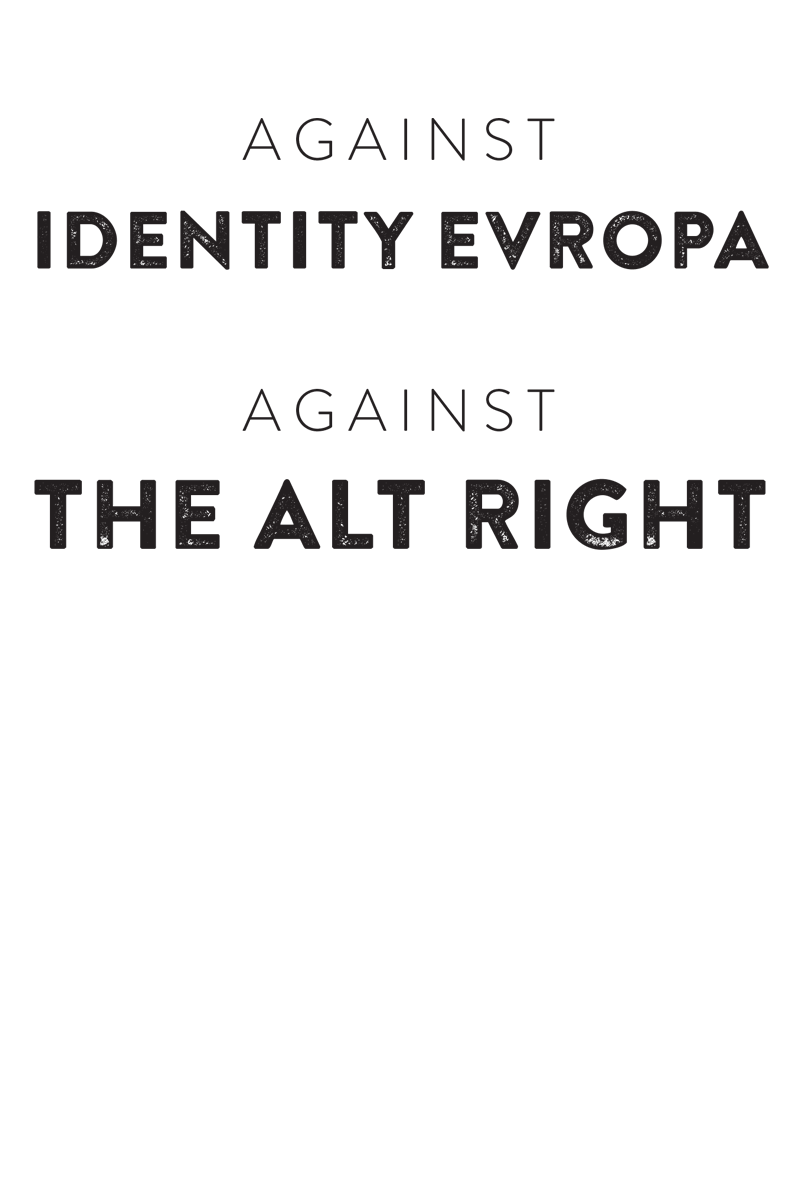 This zine was published as part of an effort to directly confront the propaganda efforts undertaken by the fascist group Identity Evropa. The zine provides an introduction to the group by way of reprinting an essay “Big Nazi on Campus” to give a theoretical and historical overview of what the group is trying to do and where it draws its support from. Additionally, it provides background information on many of the key leaders in the group. It’s a good example of the kind of work that is incredibly necessary in the rapidly changing political landscape in the United States.

In Defense of Smashing Cameras 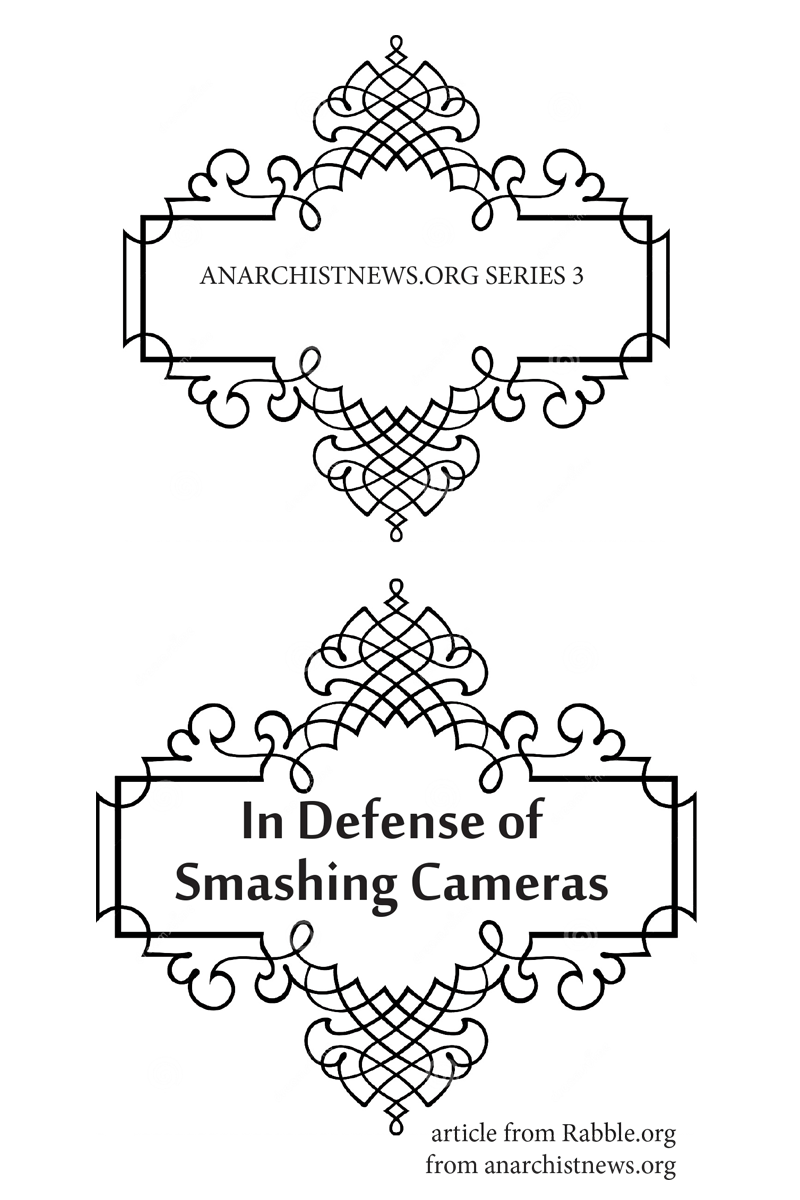 This is a new zine in a series produced by AnarchistNews.org collecting original writing and responses that appeared on the website. This essay – as the title would suggest – focuses on the role of cameras in resistance movements. Among its provocative conclusions is the idea that people should smash cameras and greet those who carry them into demos with hostility. It’s an important essay, but something seems a little off with the inclusion of comments that appeared in response to the article on AnarchistNews.org.

Resignation is Death: Responding to the Negation of Anarchy 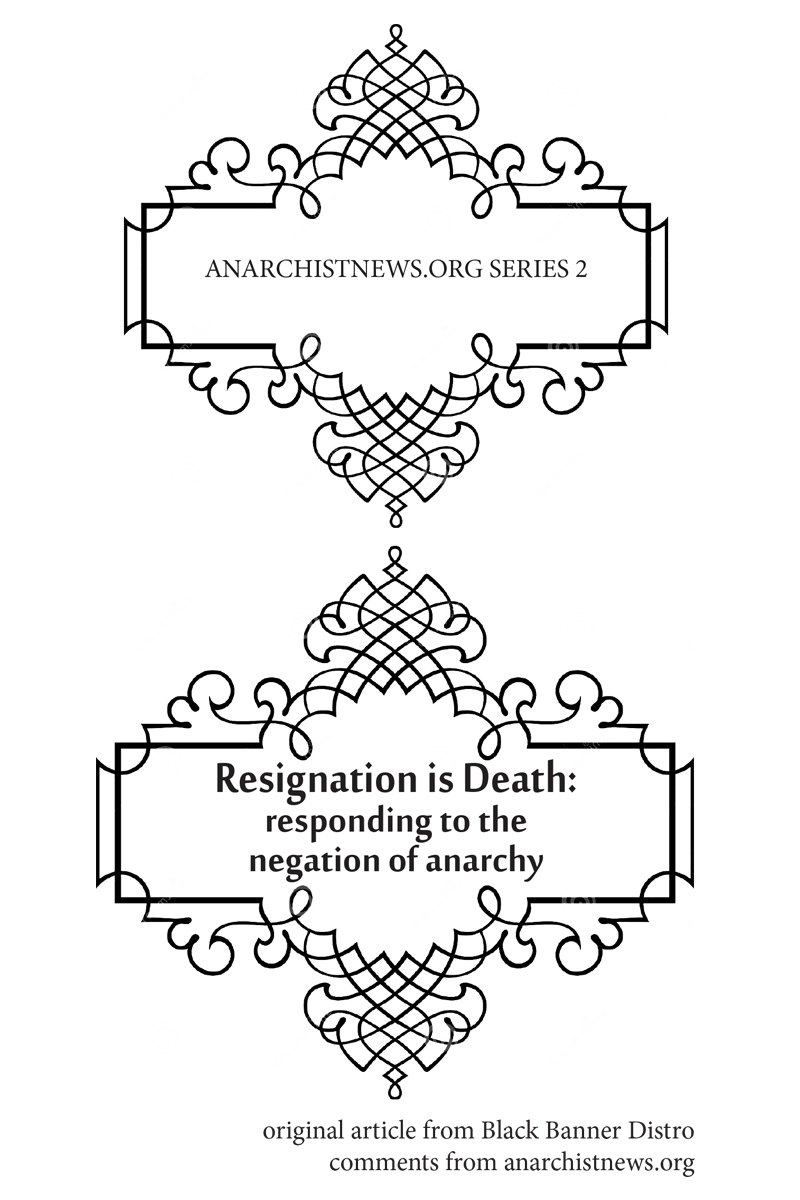 This is another zine in the new AnarchistNews.org series. This one is another version (at least 2 have been published elsewhere) of an essay critiquing nihilism and the way that it plays out in the North American anarchist space. The essay raises a lot of important questions and provides many important insights. It is definitely worth reading if you missed the previous times it was published.

Interview of ITS with the Mexican Press 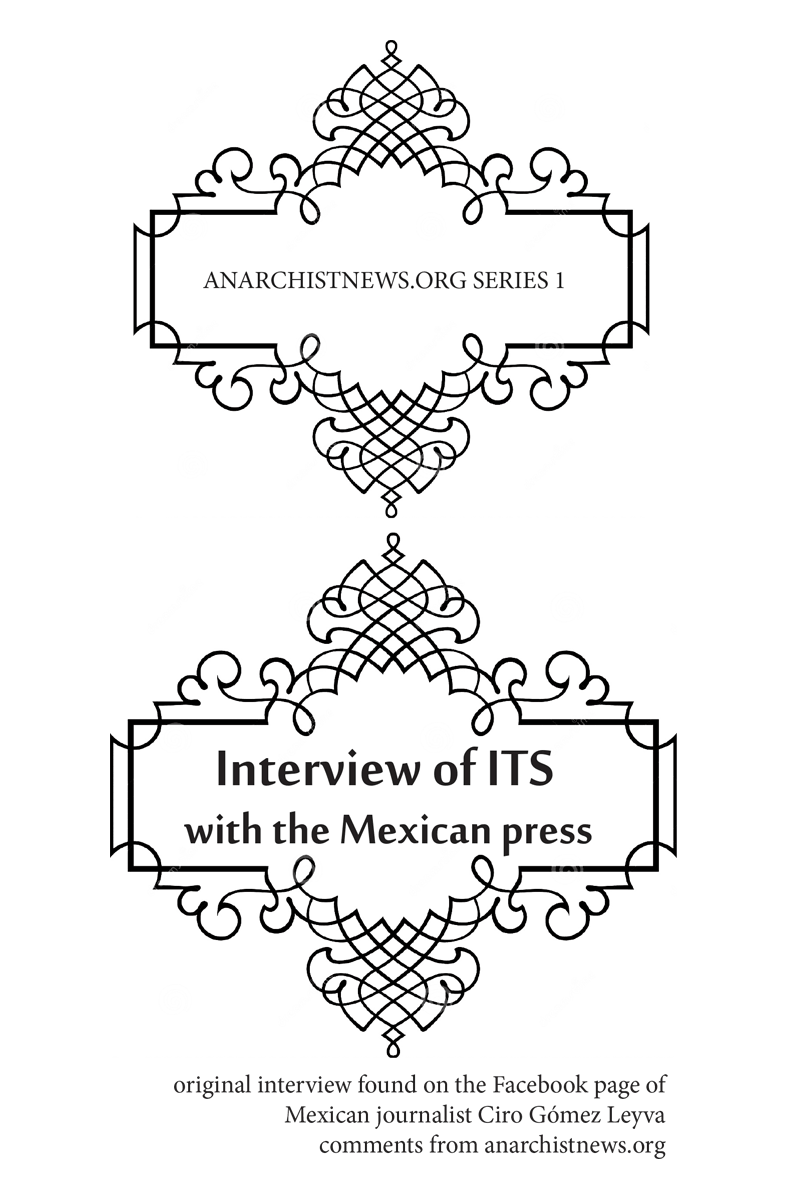 This zine – once again produced by AnarchistNews.org – features an interview with the group “Individuals Tending Towards the Wild” (ITS) about the group’s analysis and actions. The group – based in Mexico – is known for its attacks on property and individuals involved in technological research. This interview was conducted in response to the murder of Jose Jaime Barrera who worked with the Department of Chemistry at the National Autonomous University of Mexico. It includes the interview plus comments reposted from AnarchistNews.org discussing the interview and ITS 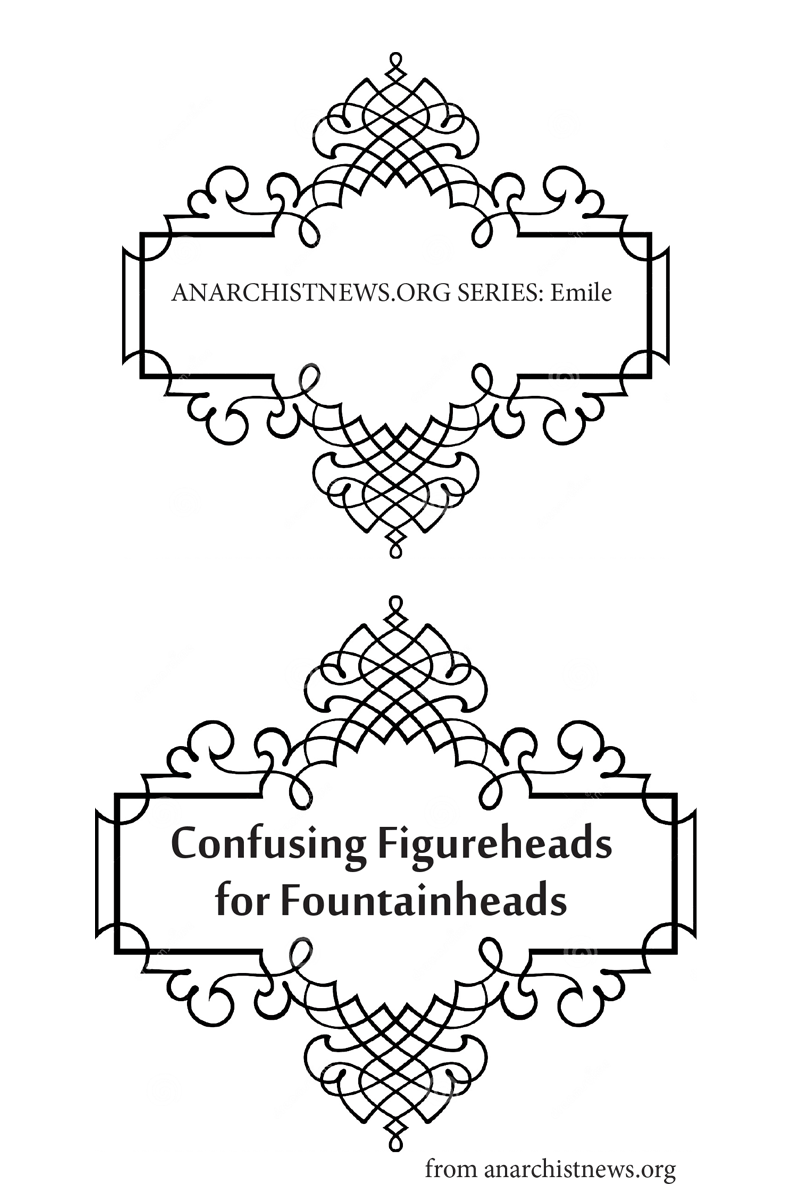 This is zine version – compiled by AnarchistNews.org – of an essay by “emile”. The author is known for their long-winded comments on the website and this essay reads like a more polished version of those comments. The essay is followed by nearly 40 pages of comments by the usual crew of AnarchistNews.org commenters as well as the author of the piece. The zine is part of a series highlighting the discussion that happens on AnarchistNews.org and this zine does that well. Whether that is good or bad is for the reader to decide… 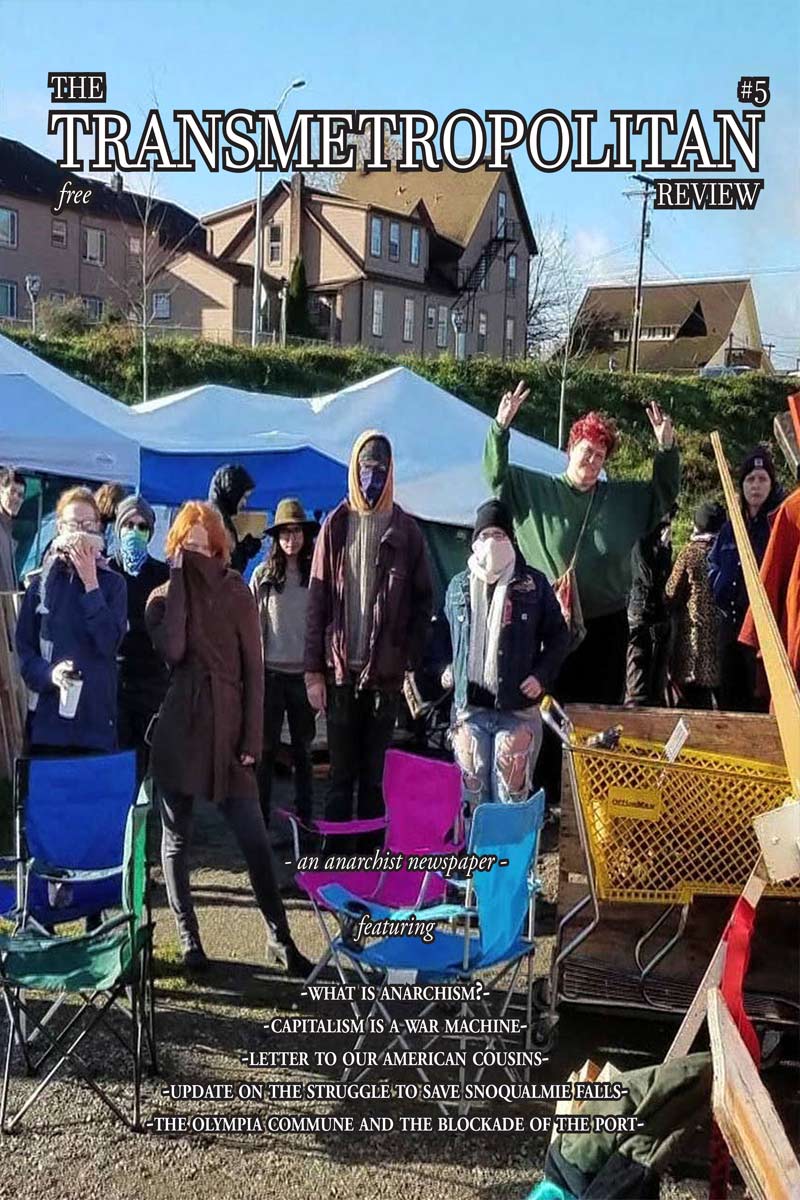 This anarchist newspaper – from the Pacific Northwest of the United States – features an introduction to anarchism alongside articles on the struggle to save Snoqualmie Falls, the Olympia Commune, and a reprinted article from France on the election of Donald Trump. It’s a good example of a regional anarchist newspaper that is designed for widespread distribution. Hopefully this project fills a need where it is based and provides inspiration for those encountering it from afar. 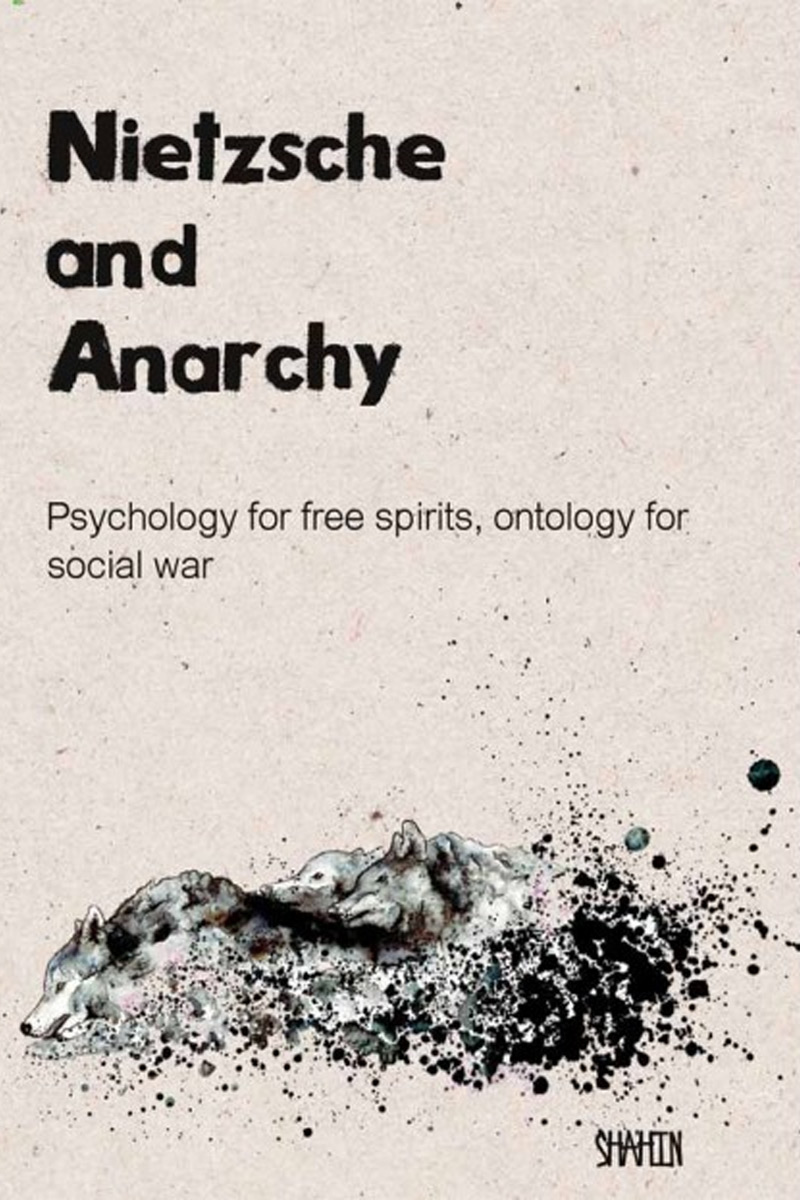 This publication – from Elephant Editions – presents a lengthy engagement with Nietzsche by the author Shahnin. The piece serves as both an introduction to Nietzsche’s ideas was well as an attempt to use those ideas as a weapon in current struggles. Specifically, the author seeks:

“…to develop an “ontology for social war”, a framework for thinking through relations of conflict and affinity, power and domination. It addresses questions such as: how do we form groups that are not conformist herds? How do we spread anarchic desires, without becoming advertisers or missionaries? How do we fight, without becoming cruel or cold?”

It’s a good example of how to do anarchist theory. 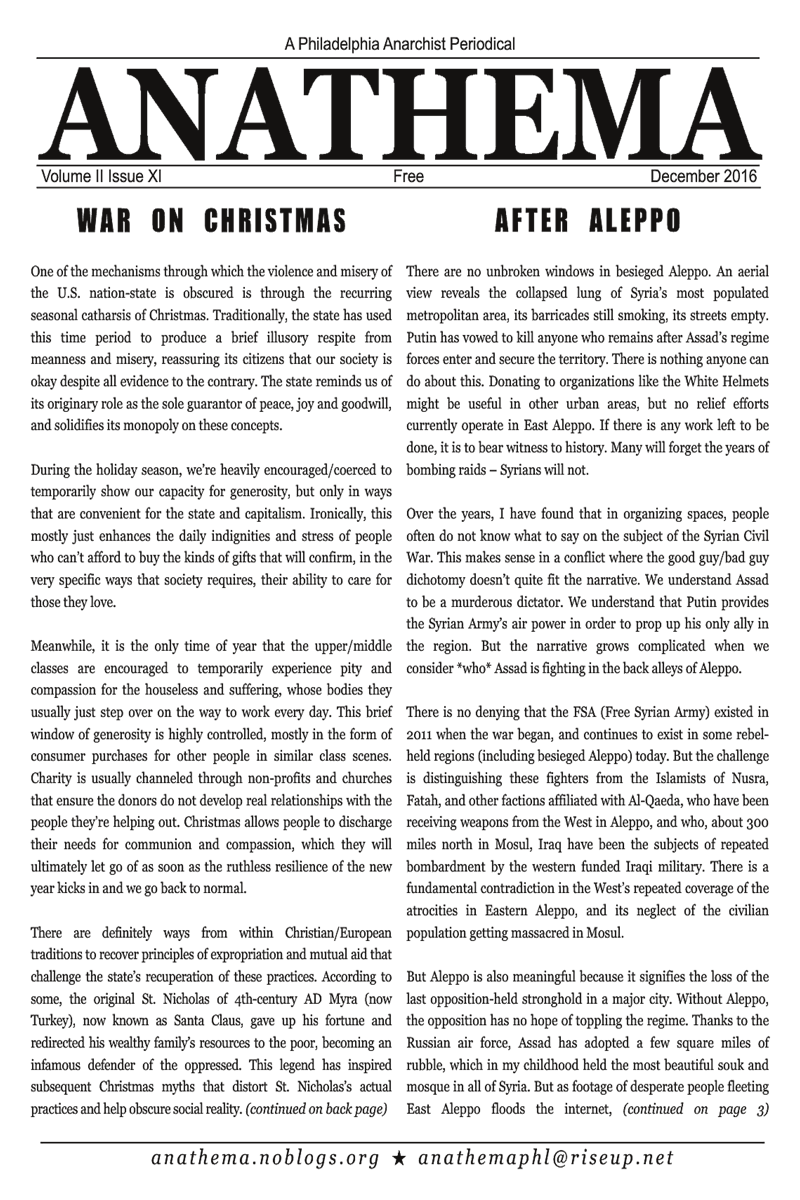 This is the 11th issue of ANATHEMA, a monthly anarchist publication out of Philadelphia. Aside from the local updates and news, it features a lengthy piece critical of Christmas (“War on Christmas”), some suggestions on how anarchists might make use of Christmas in a subversive way, and a piece on Aleppo. It stands out as an example of a local anarchist publication that could be worth replicating elsewhere. 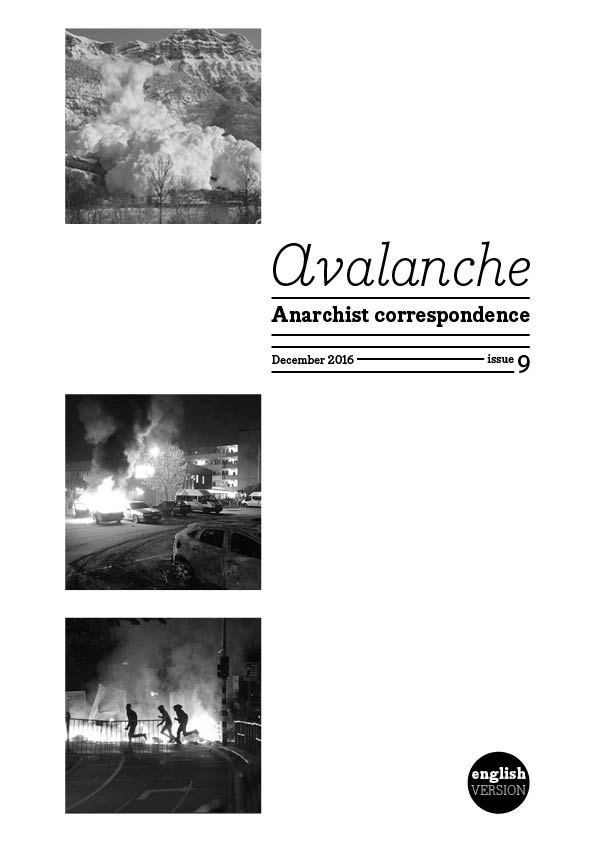 This is the ninth issue of “Avalanche – Anarchist Correspondence”. The publication’s focus is on fostering international dialog between anarchists. To that end, this issue features writings from Sweden, Germany, and France. There are original pieces analyzing recent events and struggles, as well as one piece responding to an article in a previous issue. Along with the contributions, the editors have included a thoughtful editorial that raises many important questions about internationalism.

Our Work has Begun: The Future is Coming 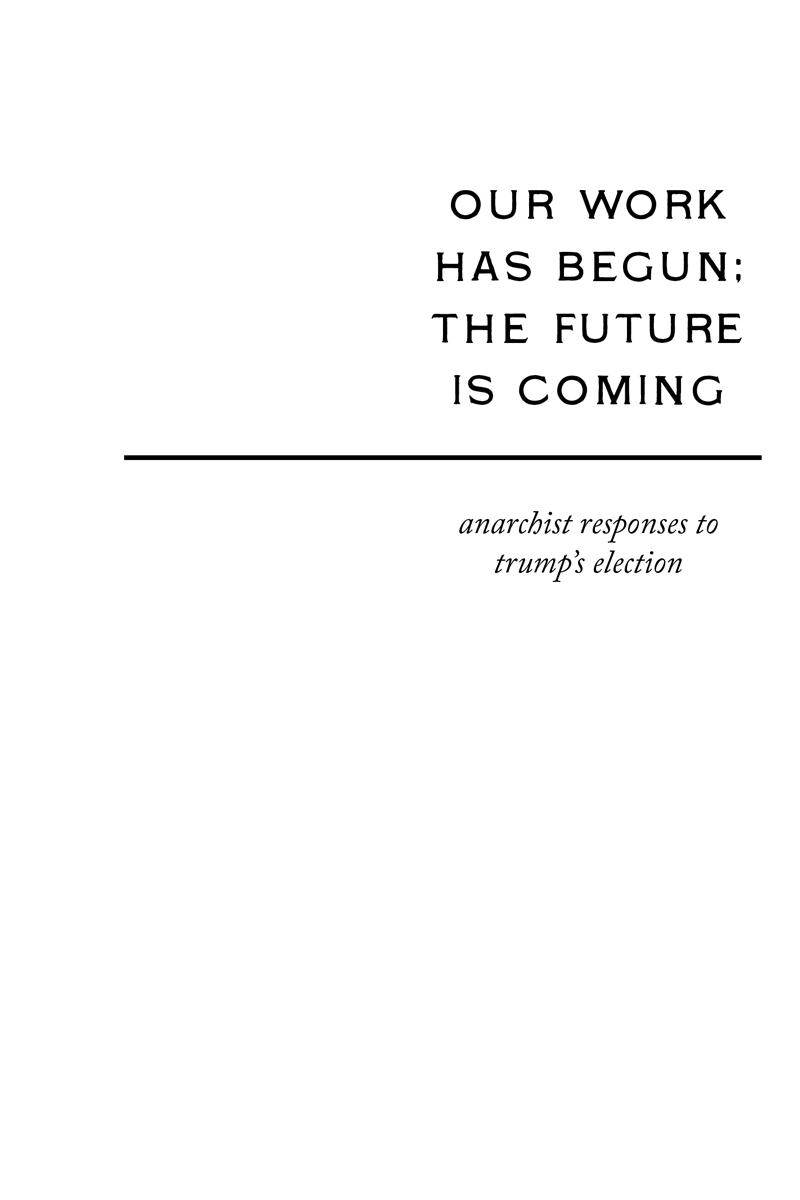 This zine is subtitled “anarchist responses to Trump’s election” and to that end it collects 7 essays responding to Trump’s election from an anarchist perspective. The zine is very much action-oriented and encourages people to find ways to take action against Trump’s presidency. The essays were selected in response to a call put out by Strangers in a Tangled Wilderness, and they run the gamut from specific political responses (analysis of fascism and how to respond) to more personal pieces. It’s a nice snapshot of how some anarchists (albeit those whose politics tend more towards the left) responded to Trump’s election. Hopefully in the coming weeks and month there will be more analysis like this this coming out. 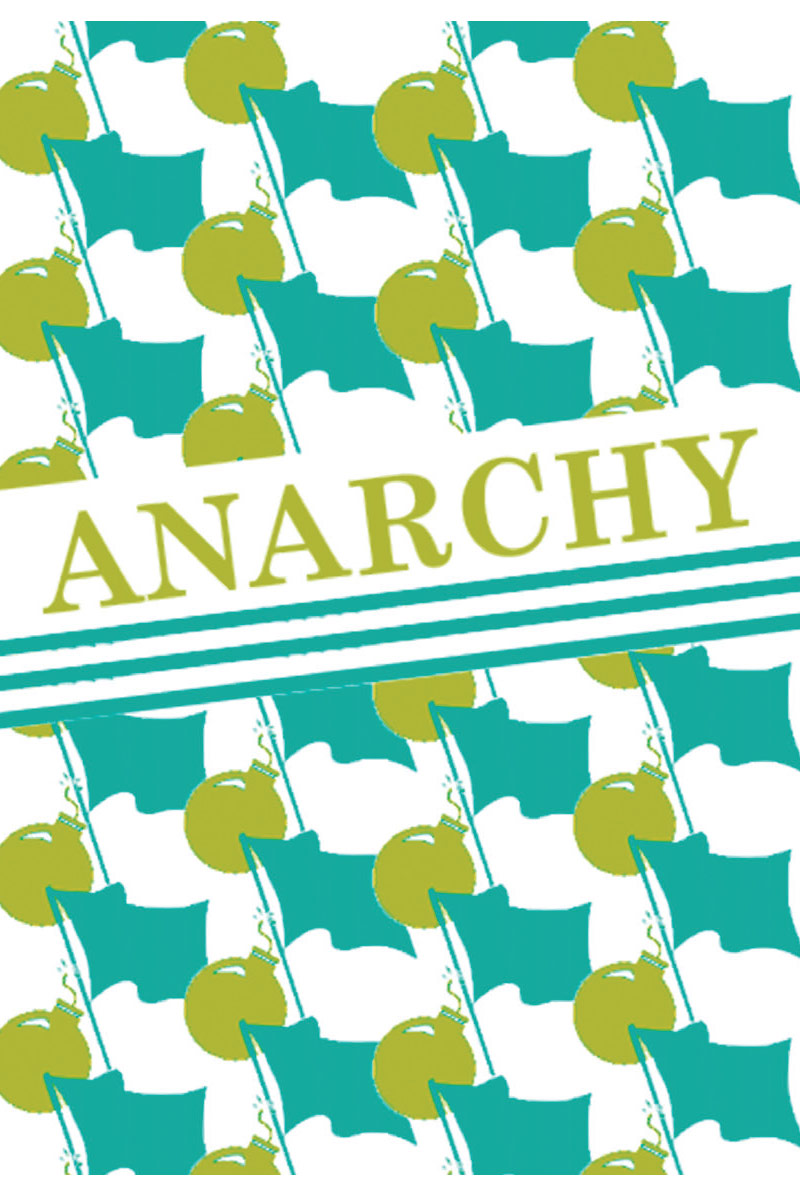 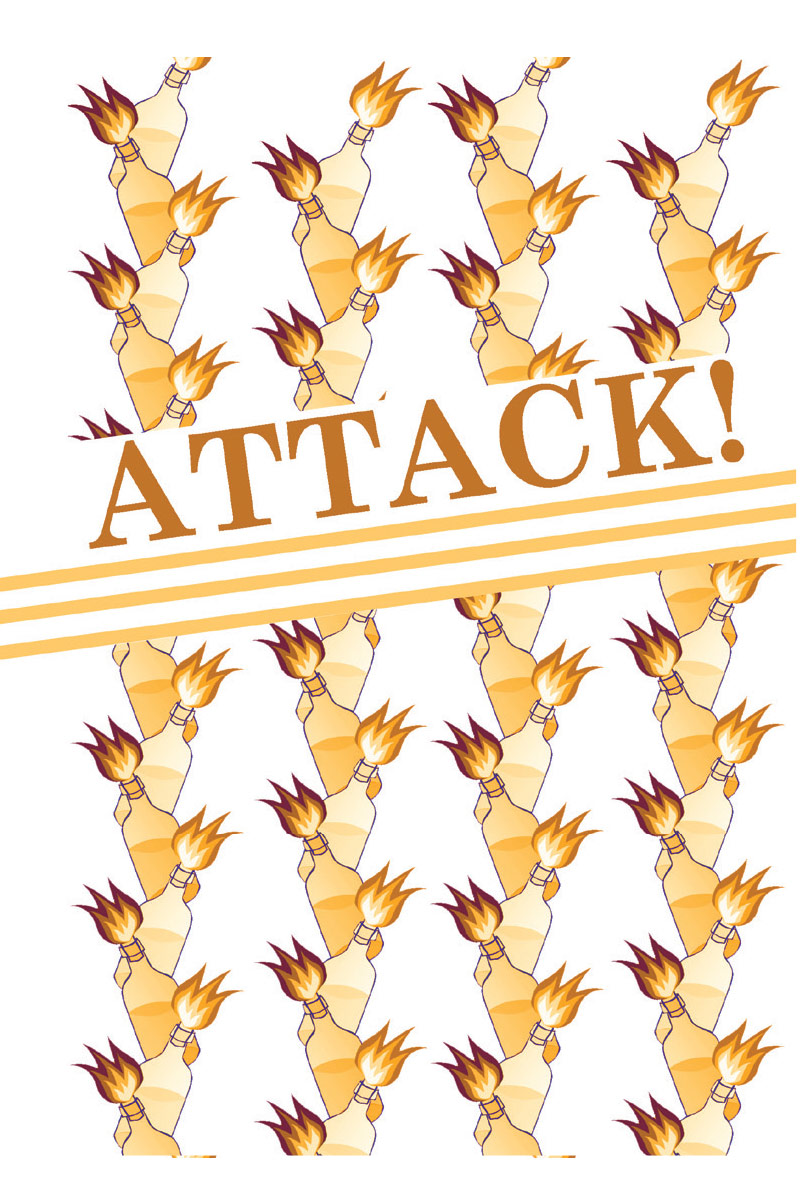 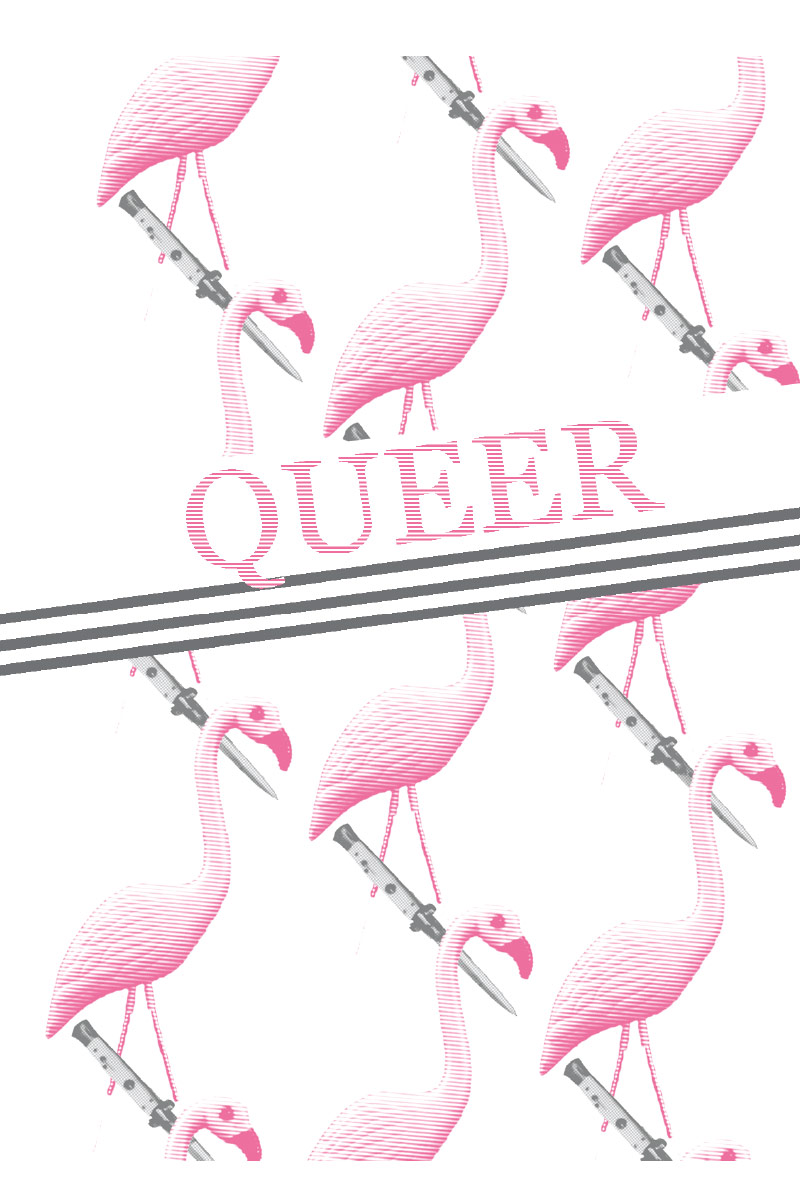 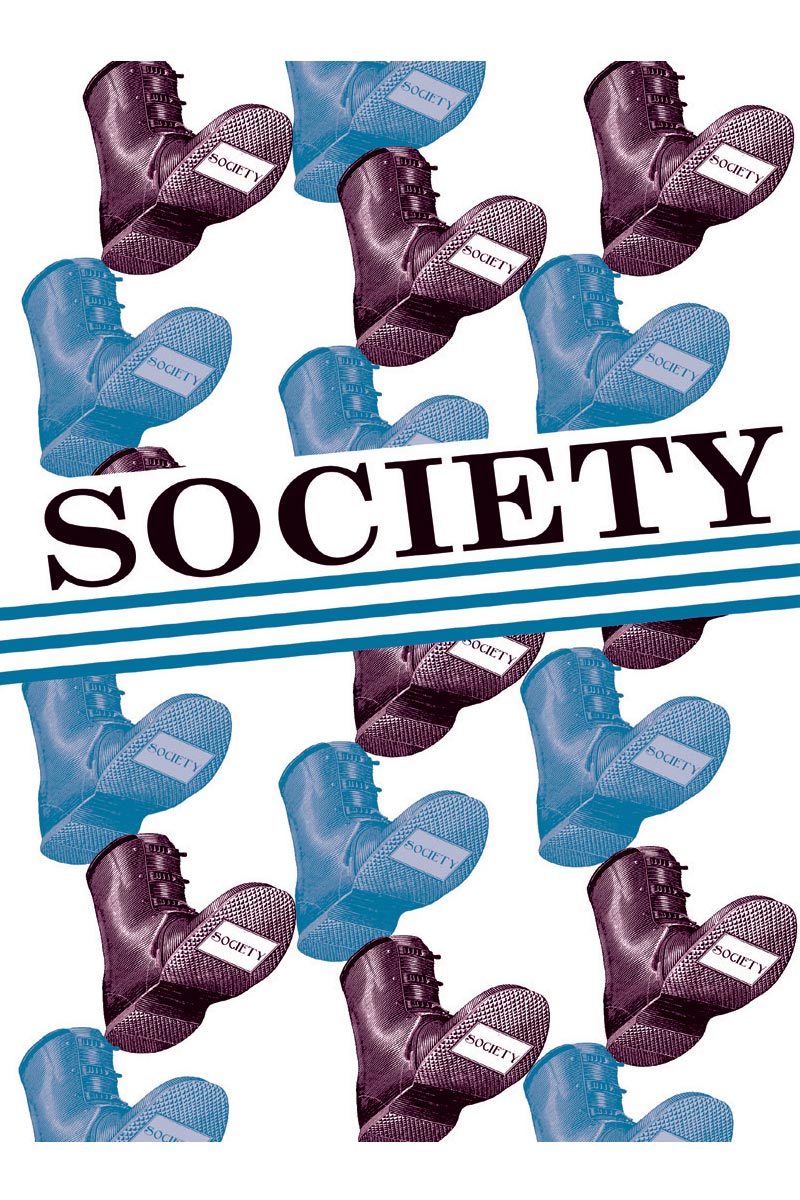 Back in 2012, Pistols Drawn – a nihilist anarchist published – produced as series of pamphlets introducing and deconstructing basic concepts. At the time they wrote:

“Pistols Drawn – the site for nihilist anarchy – introduces a series of pamphlets–dozens over time–exploring language in the interest of destroying it. The radical Left has too long attempted to define the terms of what it means to resist the existing order, from the French Revolution to the Occupation Movement. Pistols Drawn hopes that these new pamphlets give the not-left ammunition in the war against language-as-ownership. Words are the simple things we use to destroy politics, be they from below us, above us, or horizontally from our confused friends.”

Now in 2016, the pamphlets have been made available online. You can now read and print the series:

In many ways, they are a response to the “Lexicon” series produced by AK Press and the Institute for Anarchist Studies.

What Anarchists Have Been Saying For Years, And What Liberals Need To Start Hearing 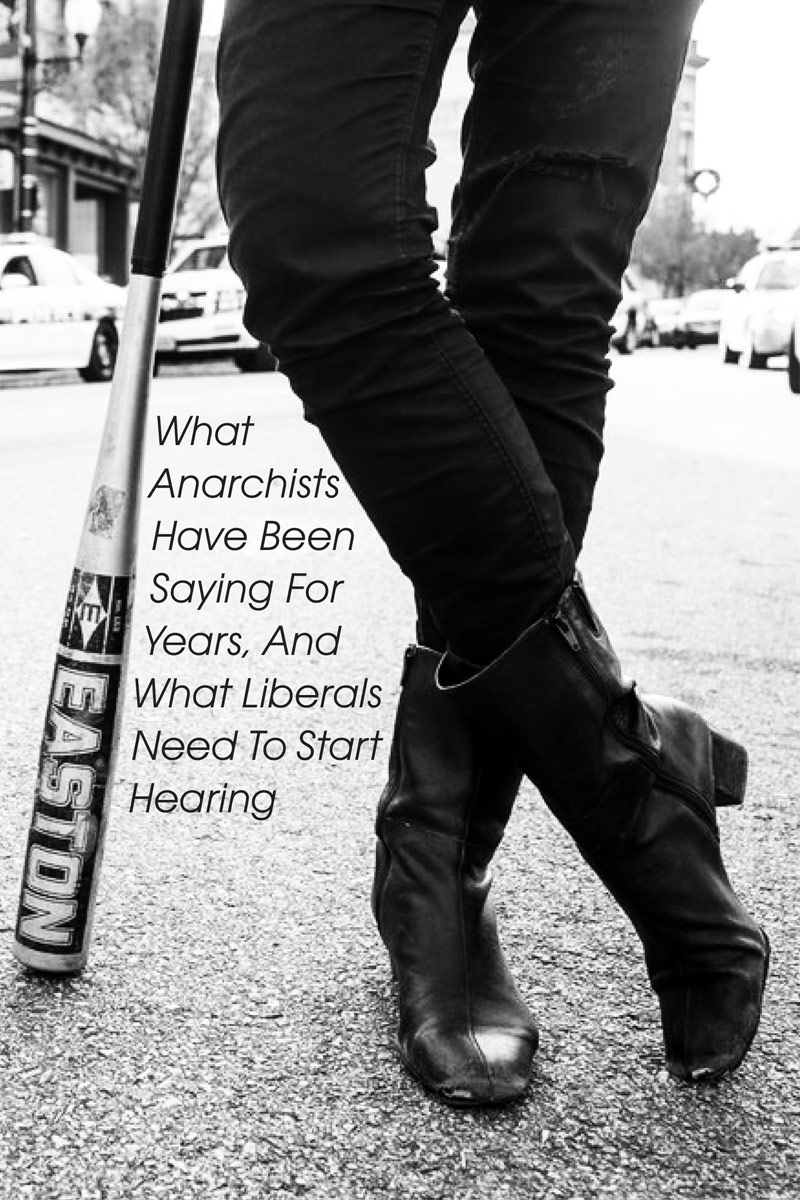 This zine presents a piece that originally appeared on ItsGoingDown.org. The essay is an effort to hight light the many positions that anarchists hold and differentiate them from liberal ones. Its discussion of how anarchists view the state, their support for self-defense, support for militant action as a means of drawing people into struggles, opposition to electoralism, and opposition to political parties is important and could be a useful tool for engaging with liberals who are also taking to the streets and organizing against the resurgent rightwing movement. It also offers some important criticisms of the left and argues that anarchists should be breaking with the left, not joining up with it.