Here’s our semi-monthly (only because we missed last month) round-up of zines and pamphlets published and posted online during February 2017. While they aren’t all explicitly anarchist, they should be of general interest to much of the broad anarchist space.

The brief descriptions aren’t intended to be reviews, nor does inclusion imply endorsement. We are operating from the position that anarchy is strongest when different tendencies interact and when ideas come into conflict with each other.

If you are looking for more zines, we also encourage you all to check out the recently launched Library on ItsGoingDown.org

If you have suggestions for titles to include in next month’s round-up, by all means drop us a line.

Tame Words from a Wild Heart 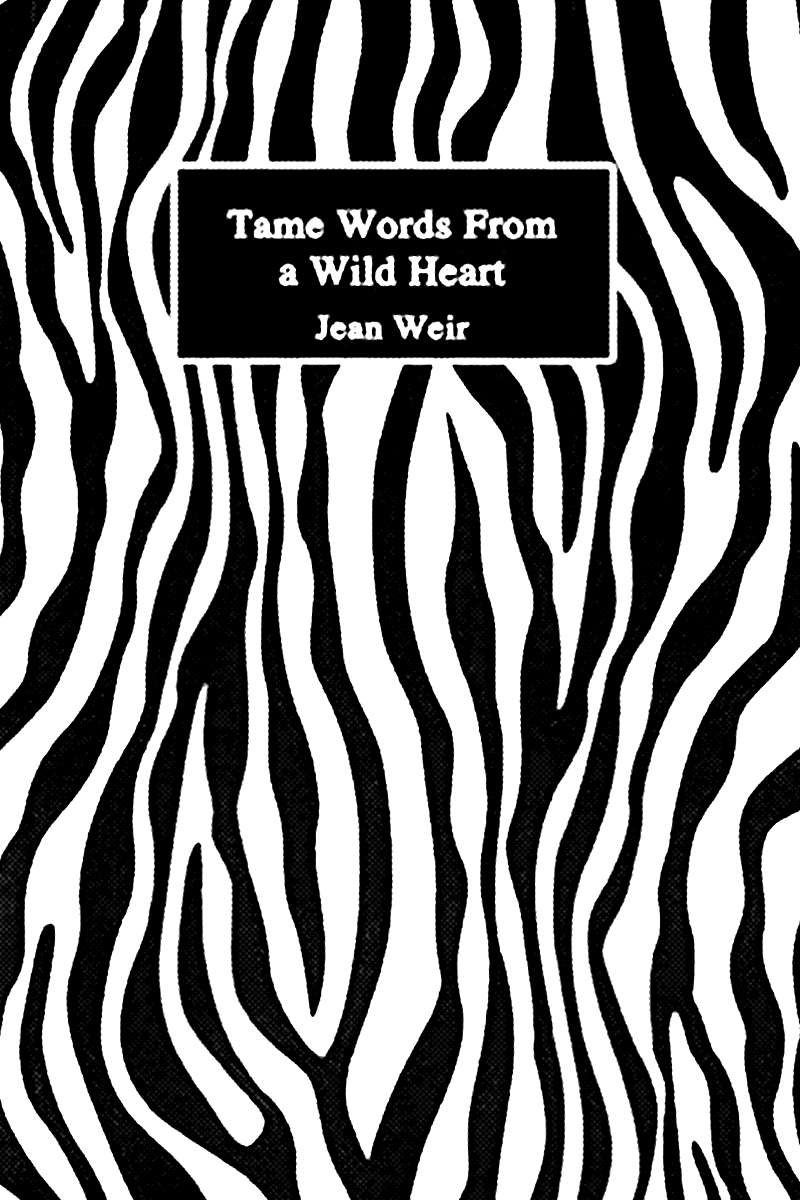 This zine is a newly released compilation of writings by Jean Weir, who has for years tirelessly released numerous invaluable anarchist pamphlets through their Elephant Editions project out of the United Kingdom. This pamphlet combines writings by Jean Weir from many of those pamphlets (such as critical introductions), as well as interviews and unreleased texts that have appeared elsewhere. A worthwhile collection from a solid comrade! 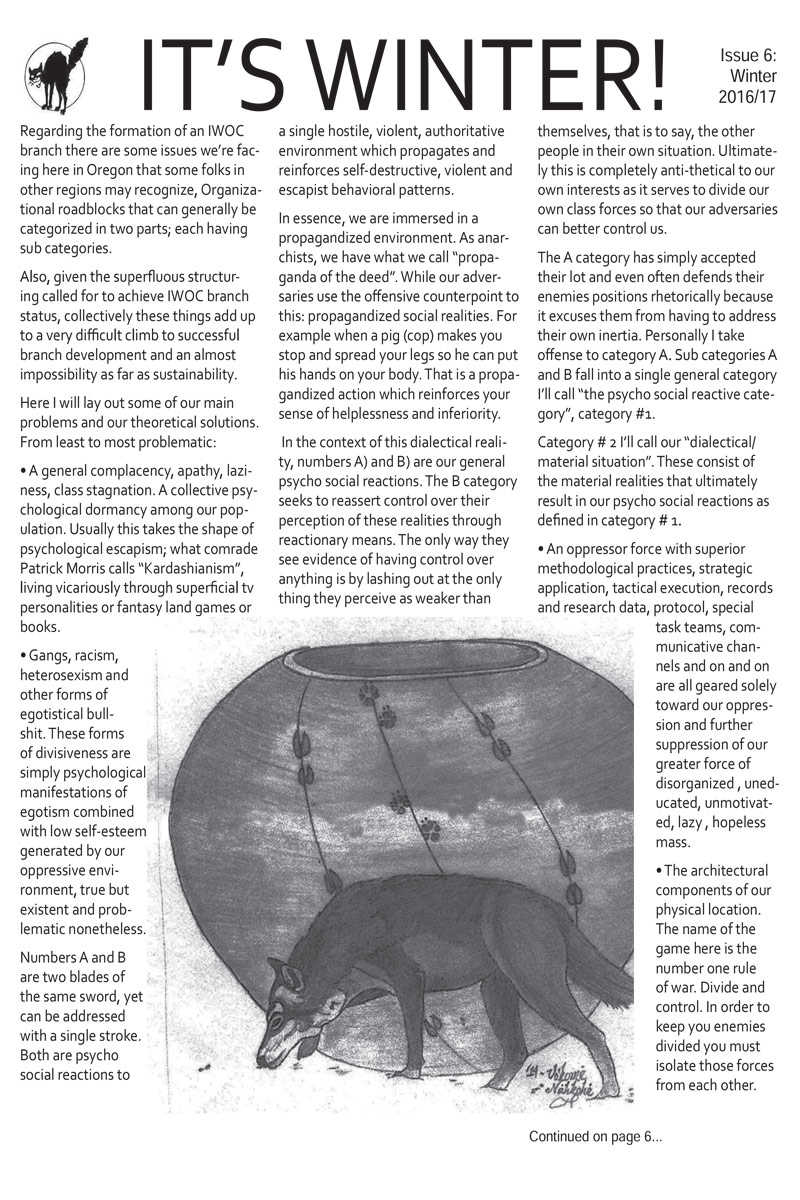 This is the latest edition of the Industrial Workers of the World (IWW) publication, the Incarcerated Worker, which is published by the union’s Incarcerated Workers Organizing Committee (IWOC). In this sixth issue, there are writings by prisoners, a timeline of recent prisoner resistance, artwork, and a list of IWOC chapters.

How to Join the Resistance: Ideas for Fighting Trump and Becoming Ungovernable 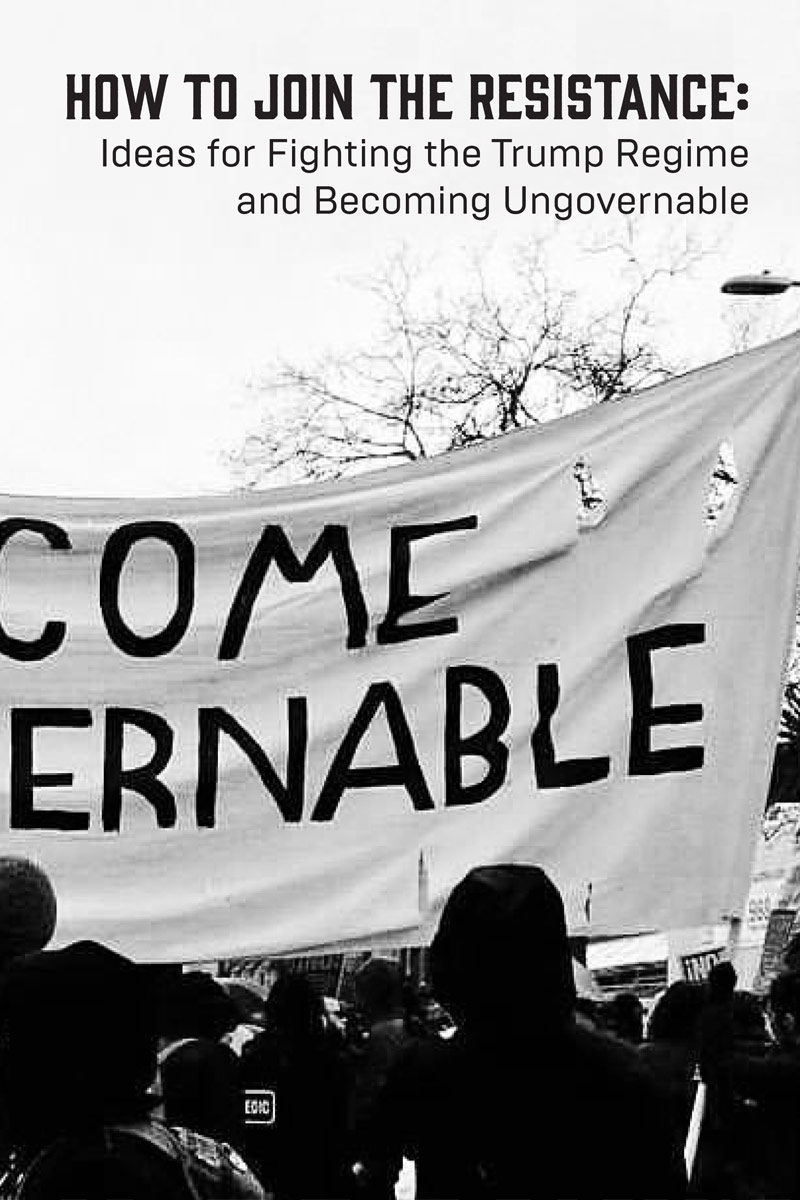 This zine is a useful guide for those folks looking either for ways to “Fight Trump” or for anarchists looking for new materials with which to reach new folks who have taken to the streets in response to Donald Trump’s election. Written in a welcoming and encouraging manner, this zine seeks to open the path to anti-authoritarian resistance and makes some recommendations on specific ways to fight in the current era while also including a good resource list for folks wanting more information and ideas. If you are regularly table or distribute literature in some fashion, this should probably be among the titles you are distributing. 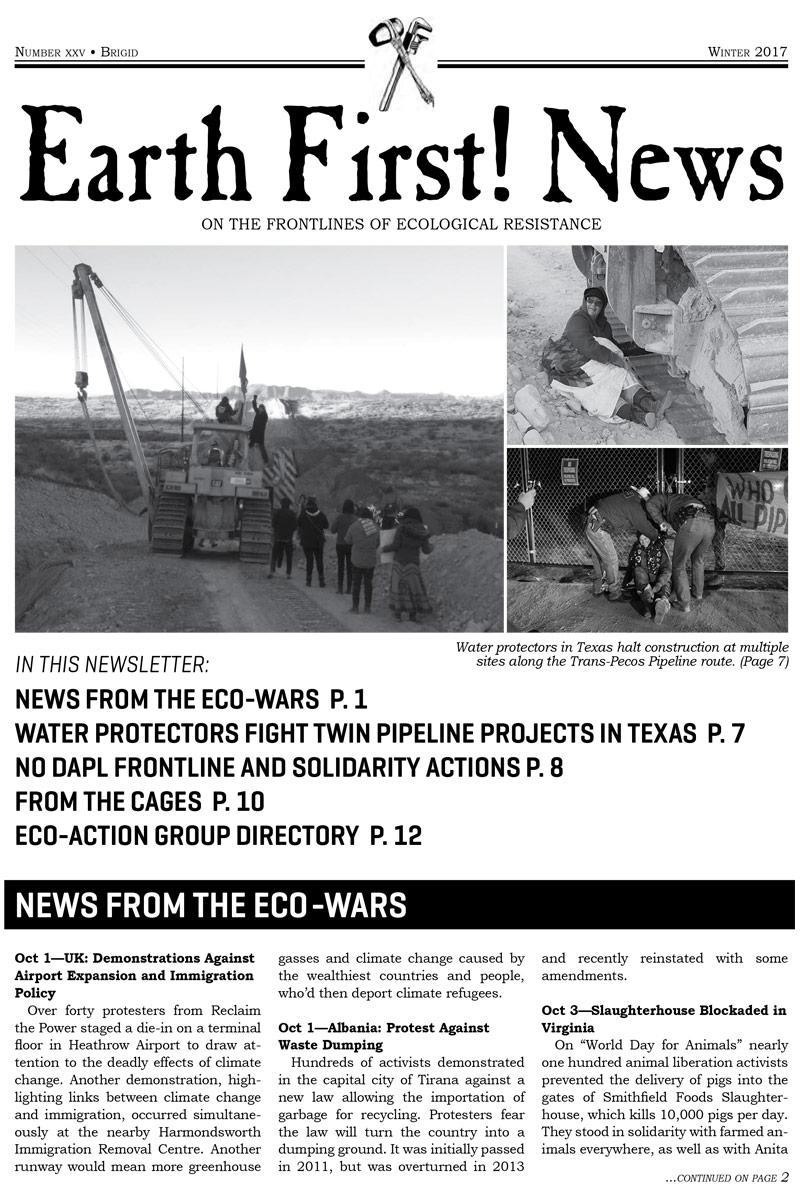 This is the most recent edition of the Earth First! News, a frequently released publication detailing “News from the Eco-Wars”. This edition features a chronicle of eco-actions from October to December of 2016, an article on anti-pipeline resistance in Texas, coverage of the #NoDAPL resistance against the Dakota Access Pipeline, and update lists of eco-prisoners and eco-resistance groups.

Critical Metaphysics as a Science of Apparatuses 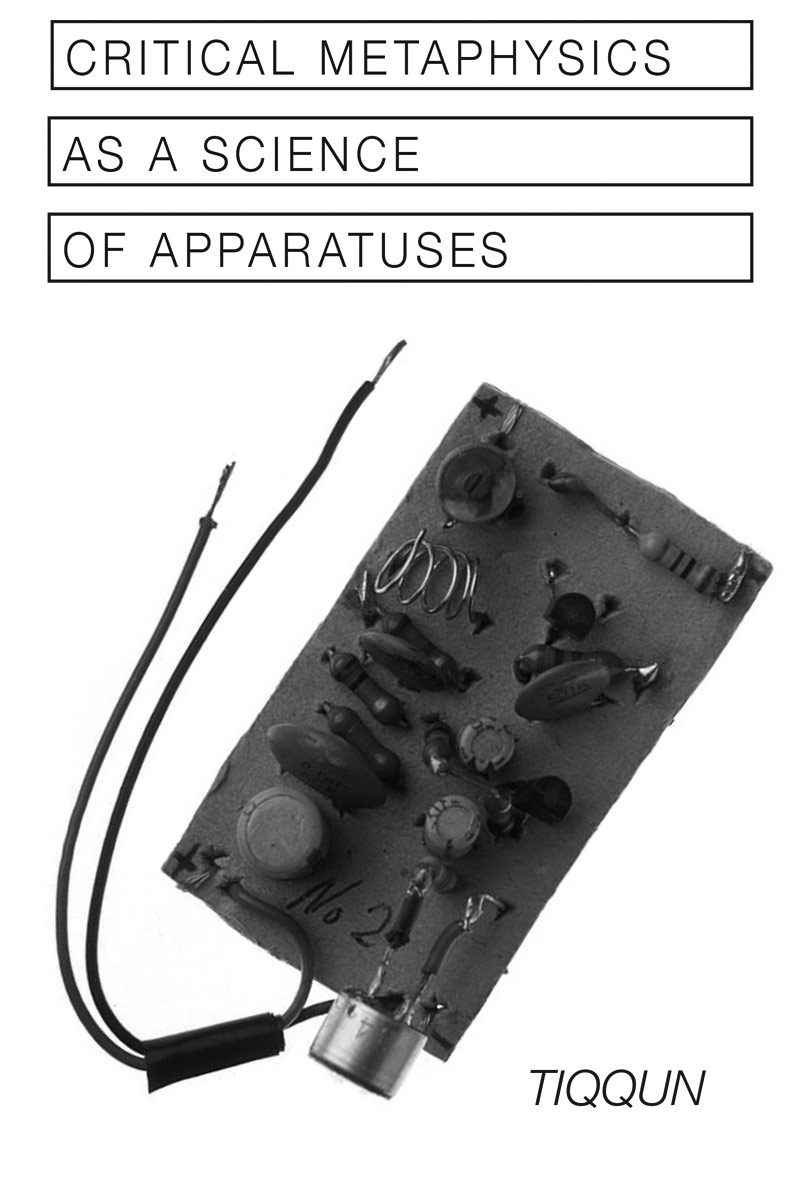 This is a new edition of a text by the French group Tiqqun that originally appeared in 2001 and was later published in English in the book “This Is Not A Program.” Whilst this has circulated for quite sometime within the anarchist space, this is a nice new edition with superior formating. The text makes a worthy starting point for engaging with Tiqqun’s ideas.

10 Preliminary Theses on the Resistance 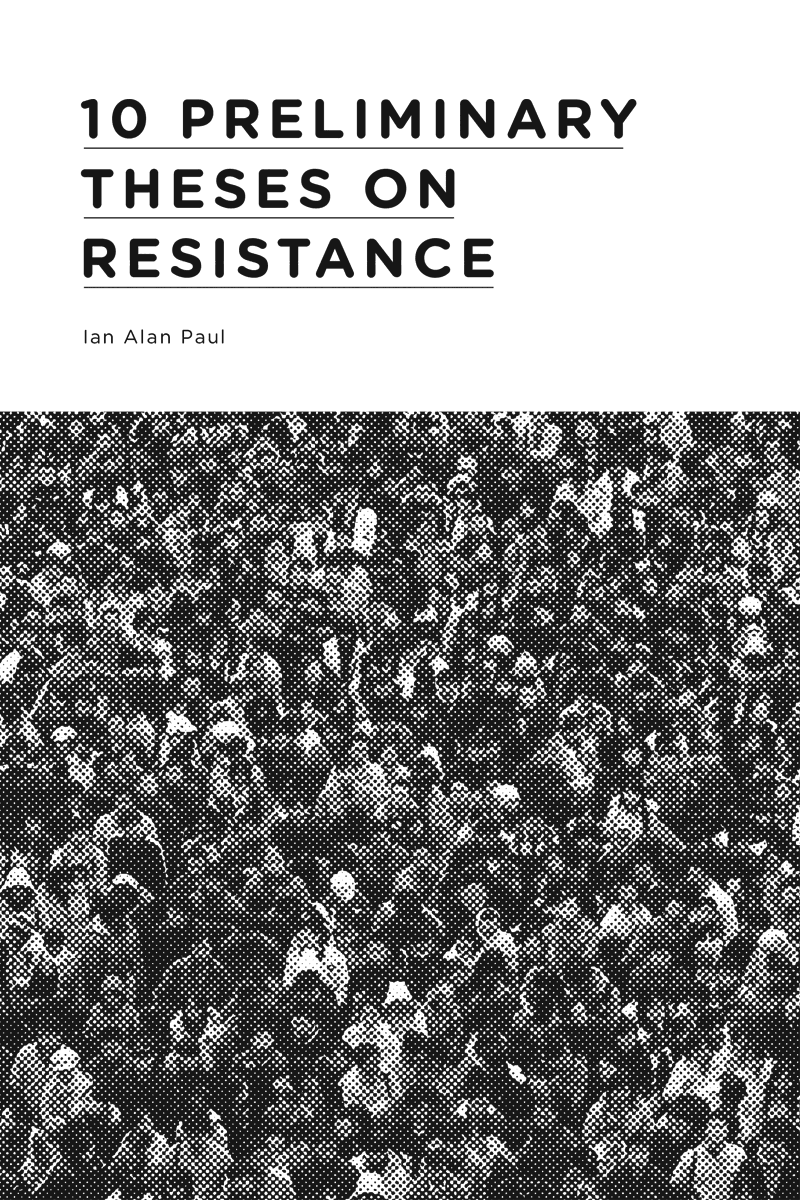 This zine collects 10 observations on what “the resistance” to Trump might entail and what it might look like. This brief excerpt gives a good indication of the tone of the text:

Behind burning barricades, in occupied lecture halls, on blocked highways, at shut-down airport terminals, in riotous street parties, at lock-downed bank entrances, in striking ports, online and on the streets and, for some, in jail cells, people will one by one accumulate and aggregate into something else, something otherwise. Even the best of friends will be met again as if for the first time, encountered anew within the tumult and turbulence of a multiplicity of struggles. Acts of negation will establish the conditions of possibility for new forms of affirmation, and every opportunity to refuse Trump will also be an opportunity to discover in each other the possibility of becoming a force together. 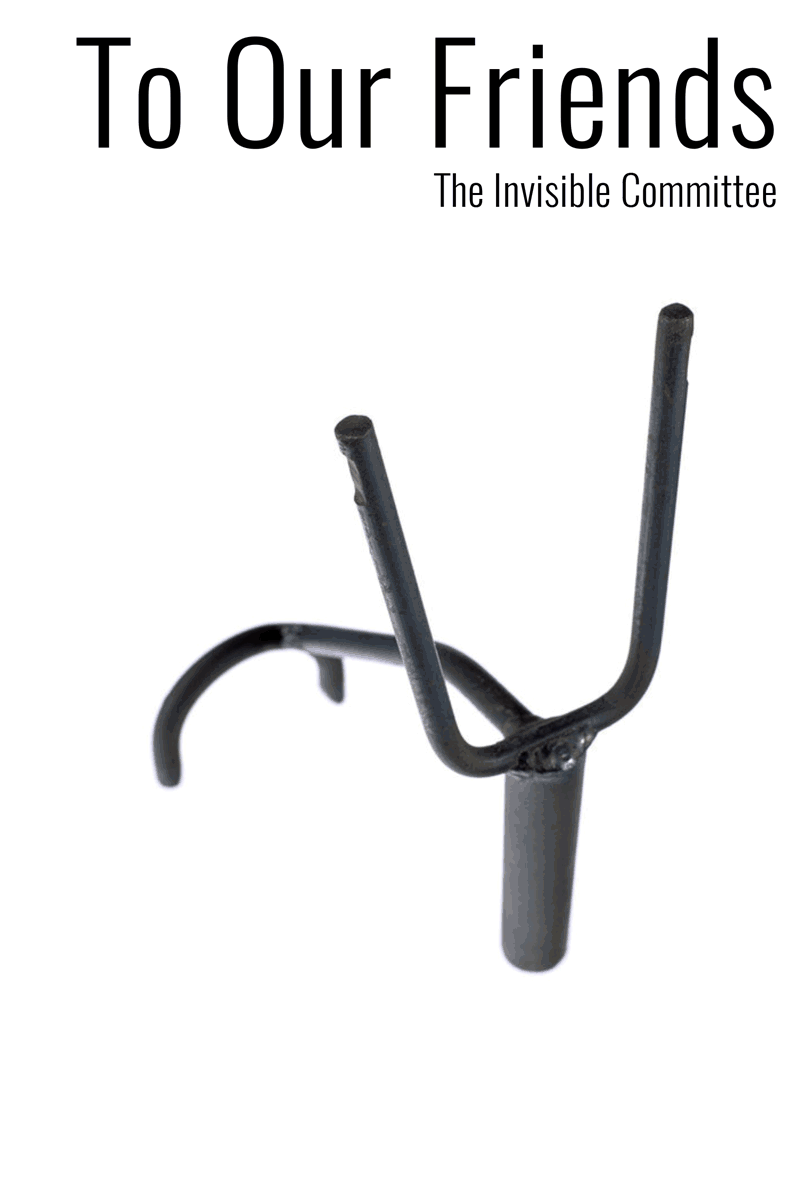 This is a nice, easy-to-reproduce version of the book “To Our Friends” released in 2015 by the Invisible Committee. The Invisible Committee – who gained fame and notoriety for their first book, “The Coming Insurrection” – expands on the ideas raised in their earlier book, while explaining recent events through their lens of their insurrectionary critique. It’s a worthwhile read and this edition was also released in Spanish. 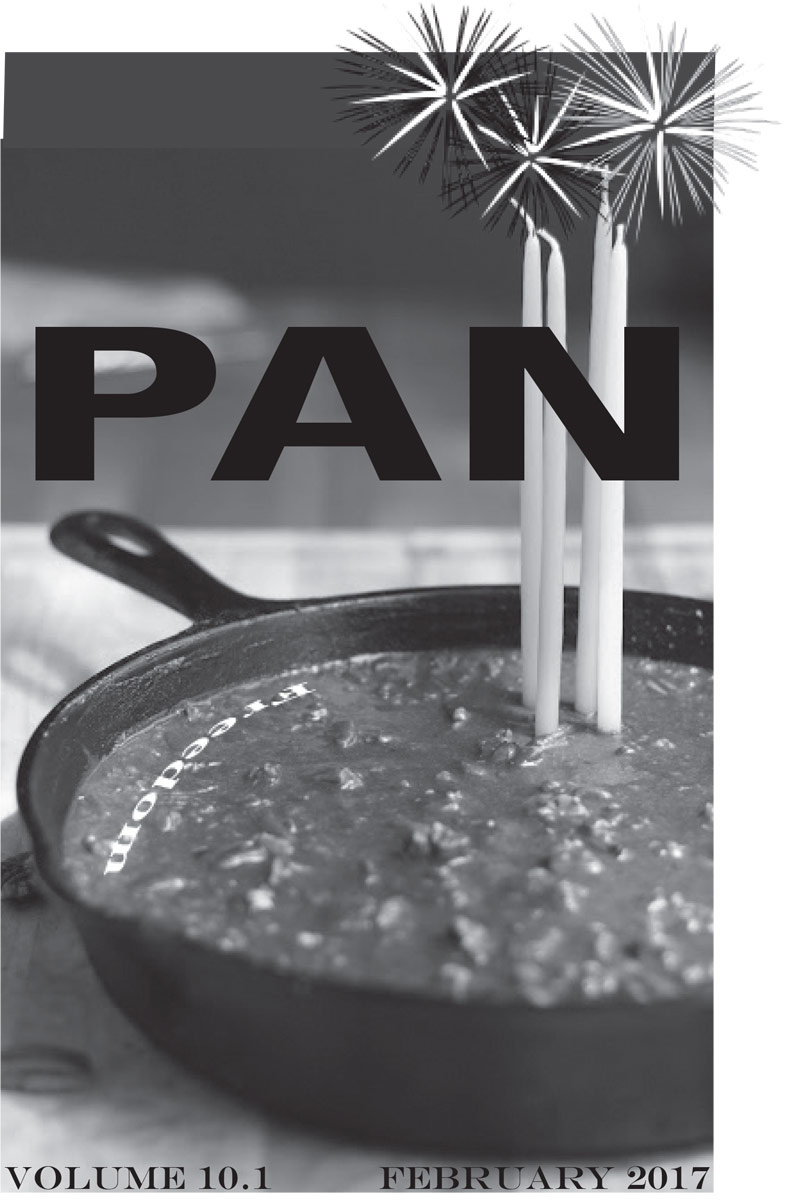 This is the latest edition of the long-running prison newsletter which has centered prisoner voices and stories of prisoner resistance since its inception in 2007. This issue features announcements of new prison groups and programs, updates on resistance, calls to action, and a lengthy account of activities undertaken in Bloomington, IN as part of the September 9, 2016 Prison Strike. As a whole, the Prison Strike is featured prominently throughout the pages, making this an excellent resource for people wishing to learn more about the strike.

Relentless: An Interview with Coyote Acabo 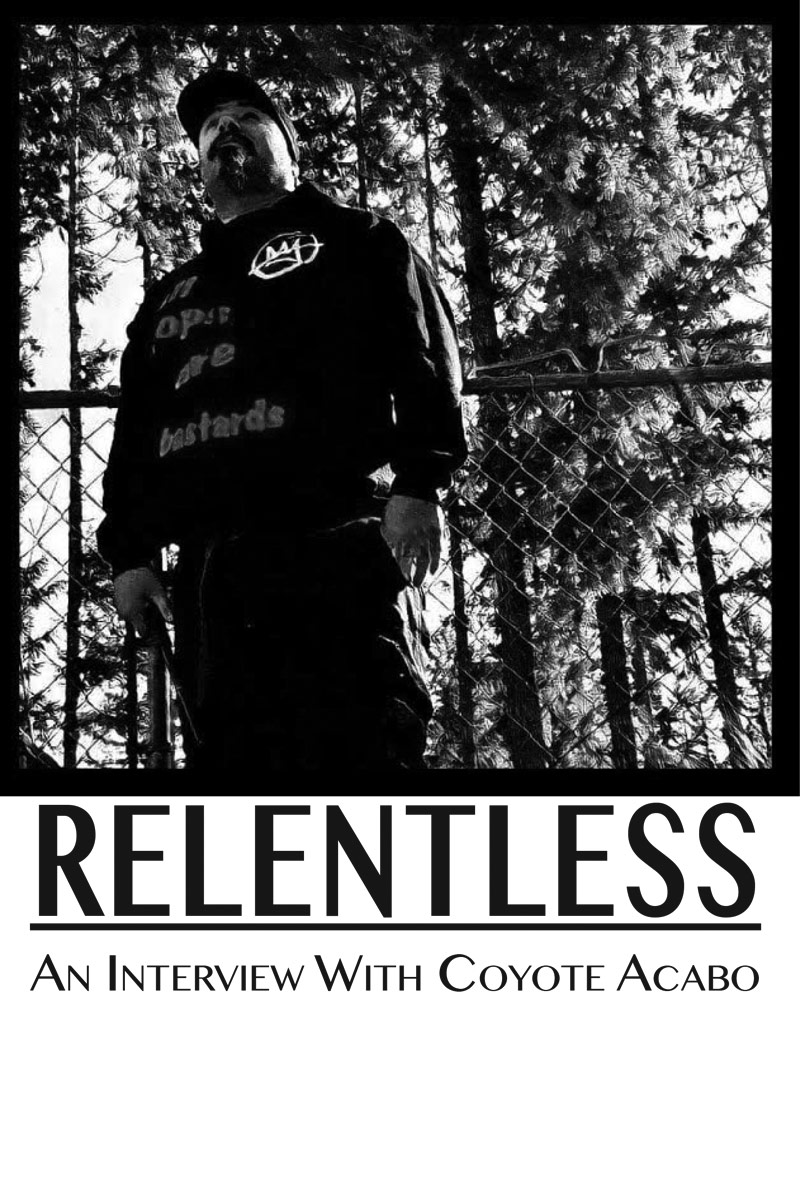 This interview – conducted in 2014 – has been re-published in an effort to raise awareness about anarchist Coyote Acabo. Coyote Acabo became an anarchist while doing 16 years in Nevada. In the interview, he talks a lot about the organizing work he did in prison after becoming an anarchist, the importance of outside support, and their release and reception by the anarchist community in Olympia, WA. He has ongoing cases for for anti-racist and anti-police struggles in Olympia, please consider donating to support him. 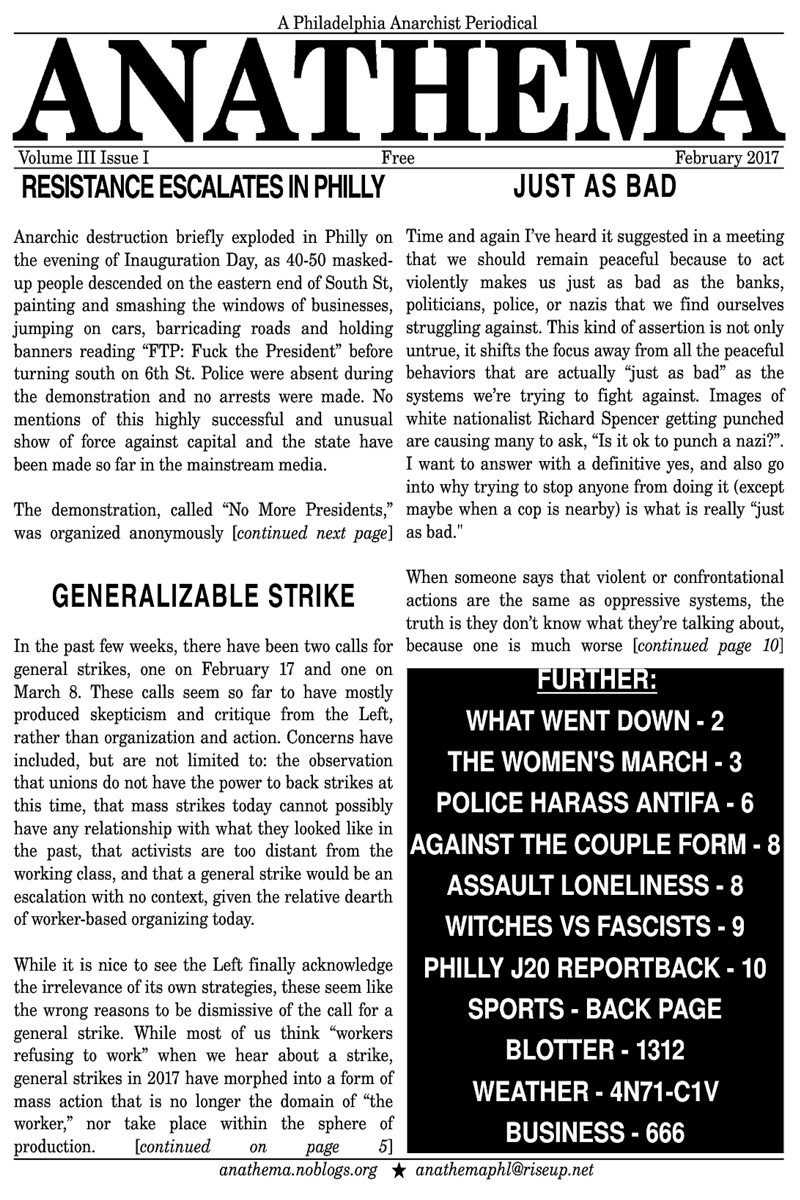 This is the latest edition of Anathema, an anarchist publication out of Philadelphia, PA. It has the usual news about what is happening in Philadelphia, including updates on resistance in conjunction with Trump’s inauguration, updates on other actions in Philadelphia, and an account of repression targeting anti-fascist organizing. Along with the Philadelphia specific content, there is an essay critiquing the Women’s March that happened in Washington DC on January 21st. 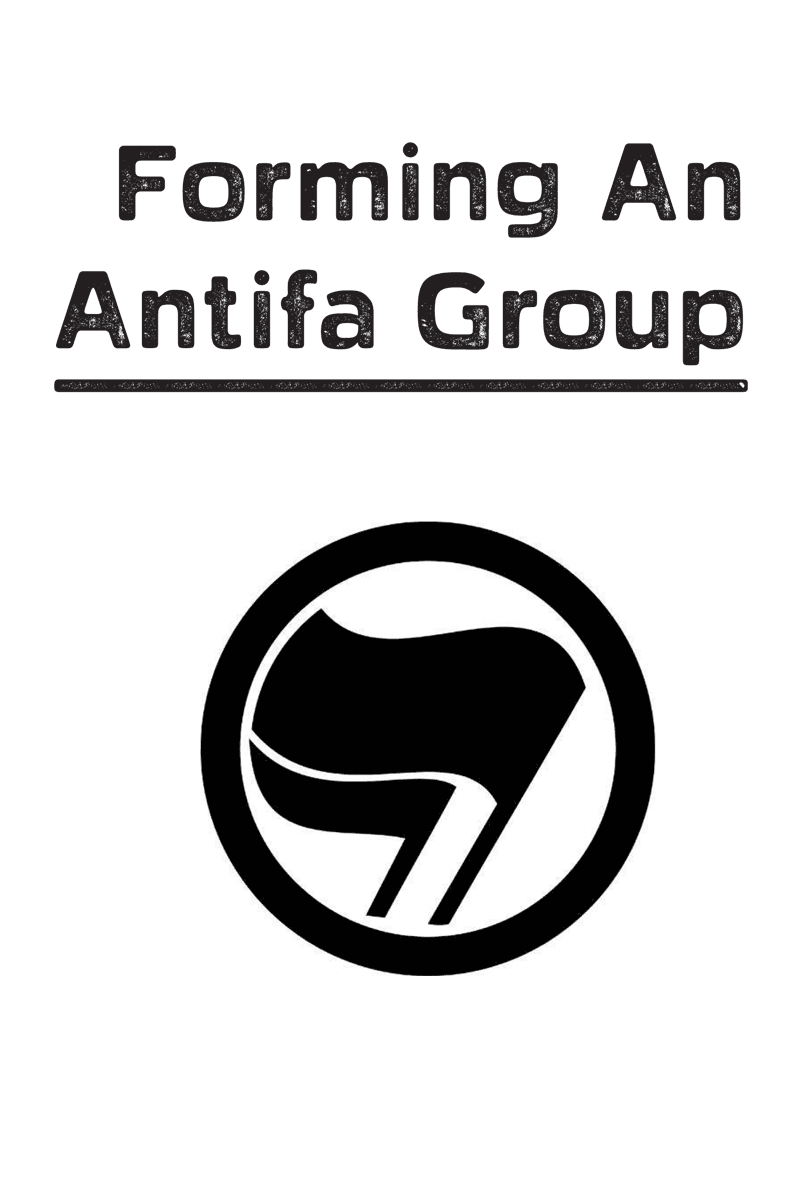 In the wake of President Donald Trump’s election, there has been an upsurge in the number of “antifa” groups forming and announcing themselves both in the streets and online. This zine draws on the author(s) years of experience doing anti-fascist work to provide an outstanding introduction for anyone undertaking anti-fascist organizing in the contemporary era.

From the back of the zine:

This essay covers a number of points, including: the advantages, disadvantages, and obligations of working under the antifascist banner; questions involving anonymity and visibility, both in person and online; self-defense and firearms; working with problematic people and dealing with infiltrators; state repression; and actions to take as antifascists.

Conflict in the Twin Cities 2016 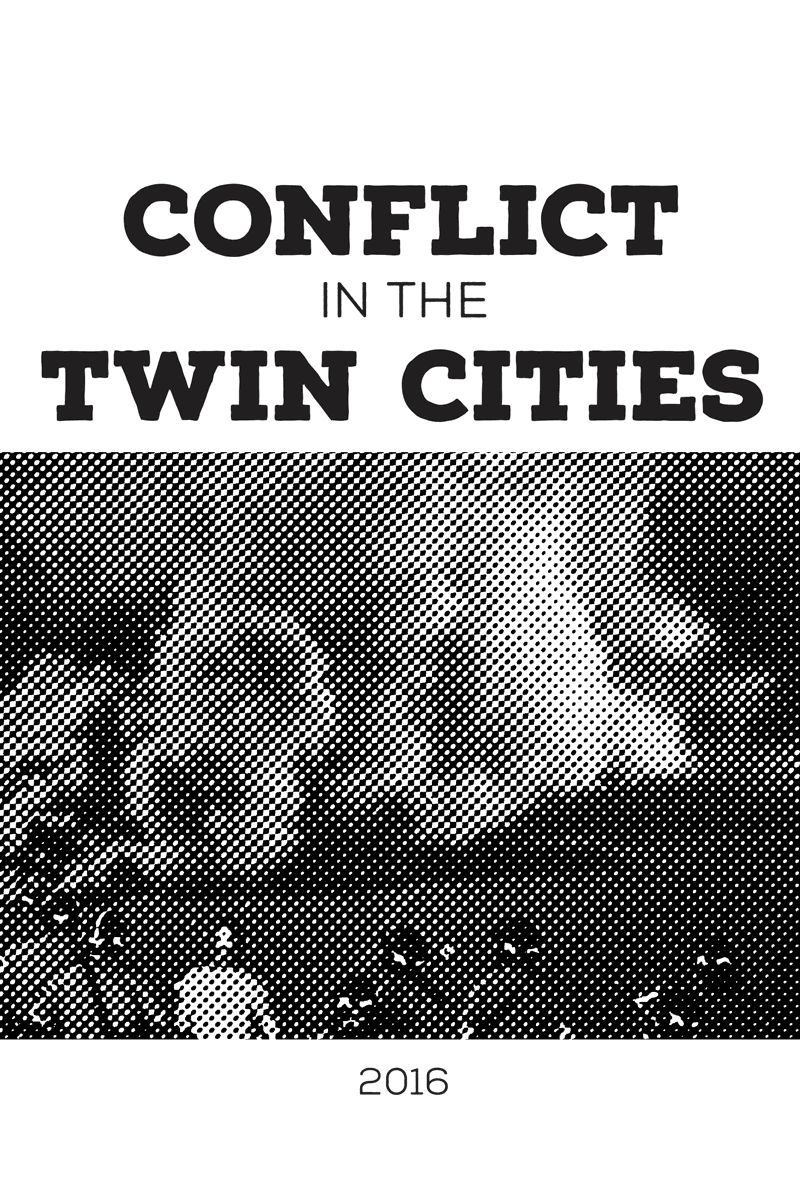 From the announcement posted on It’s Going Down:

The year 2016 was a tumultuous year for everyone. For anarchists living in the Twin Cities, it was a year marked with a number of successes as well as bitter defeats.

This zine has compiled all the posts (with some exceptions) from Conflict MN during the year of 2016. In lieu of any overarching narrative, everything here is presented as it is on the site without commentary. Readers are invited to draw their own conclusions, if any, from the contents of this zine. 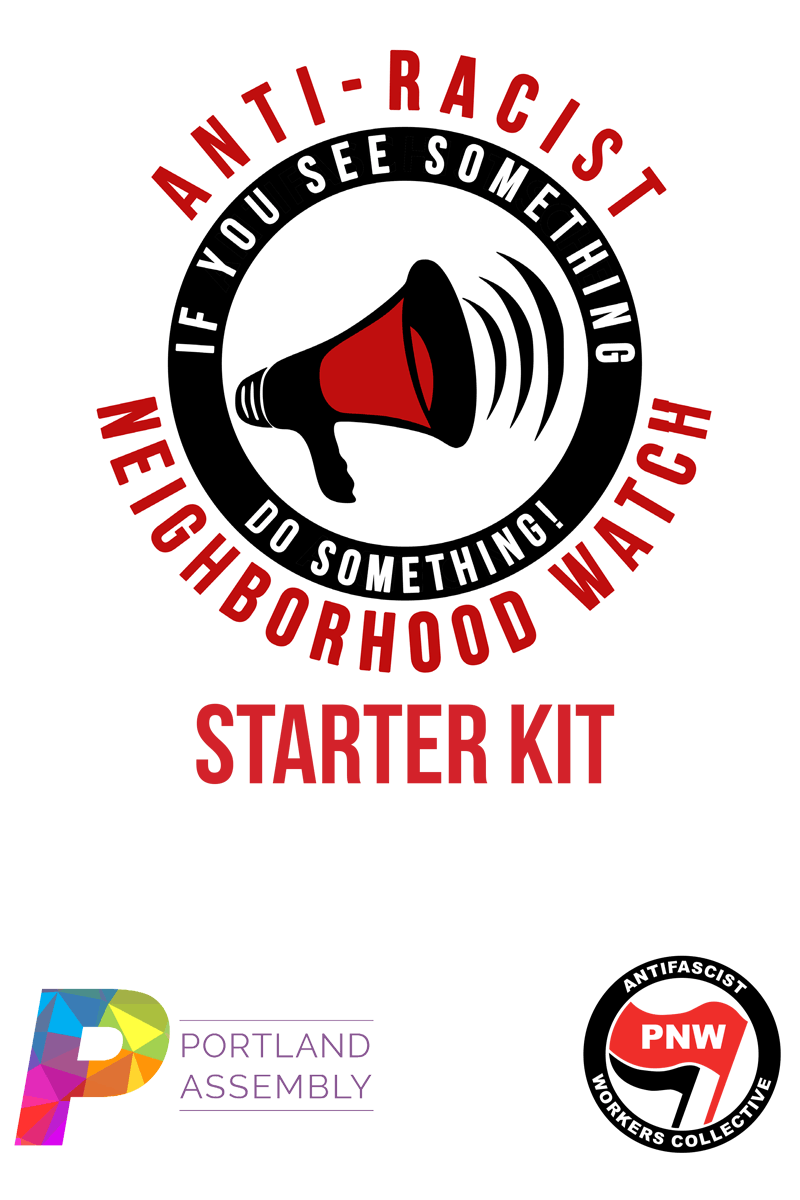 This is a comprehensive guide/booklet to starting an “Anti-Racist Neighborhood Watch” that can respond to the increase in bigoted violence that has spread across the so-called United States since the election of President Donald Trump. The guide focuses on the grassroots process of coming together and defending ourselves as opposed to hoping that politicians will do it for us. The booklet describes how to form a group, what to do as a group, developing rapid response networks, and coming up with outreach strategies. It’s a comprehensive guide that will be helpful in the coming years. 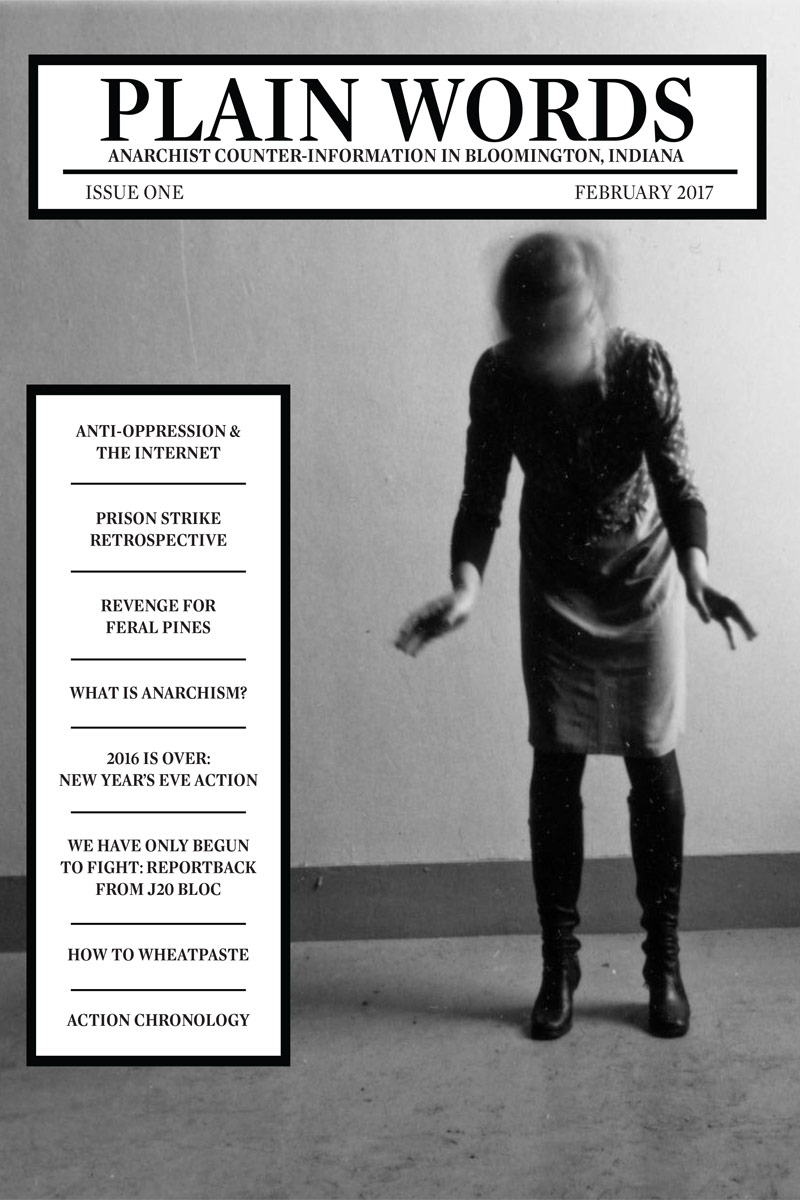 This is the first issue of a new “anarchist counter-information” project out of Bloomington, IN. It’s similar to other regional anarchist print publications, with a chronology of recent actions in Bloomington as well as more detailed evaluations of recent events in the city, including a lengthy retrospective on Bloomington and the September 9 prison strike and the actions undertaken in conjunction with the inauguration. It’s definitely worth checking out as inspiration for starting a similar project in your area (if that makes sense).

A Field Guide to Protests: The Protest Marshal 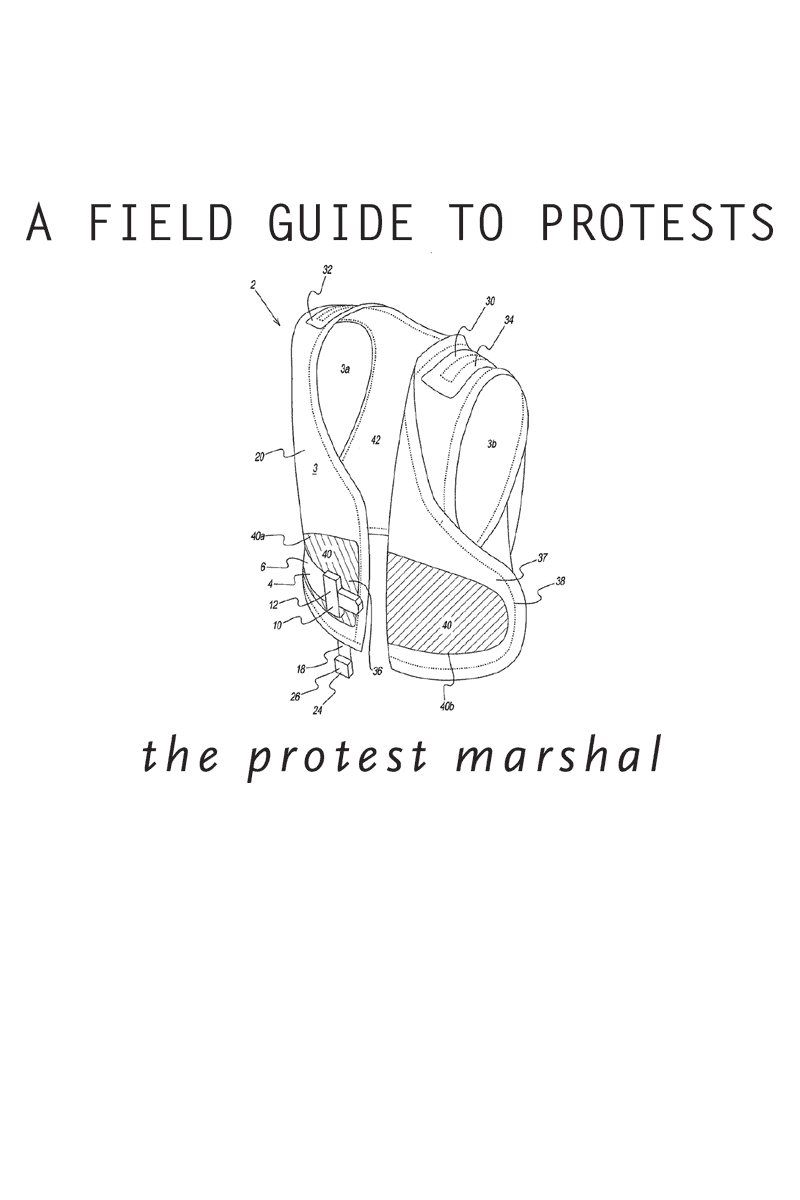 This short zine analyzes the figure of “the protest marshal” – that often present figure frequently seen wearing some form of brightly colored clothing – who has the role of “policing” a particular protest or action often under the guise of making sure that it doesn’t get “out of hand.” This zine does an excellent job of deconstructing the role of the protest marshal and exposing their contradictions. It’s spot on in its critiques and analysis, especially when it concludes with the argument that one need not wear a neon vest to be a protest marshal, but rather that one becomes one when they seek control a crowd or tell a group not to engage in a particular action. 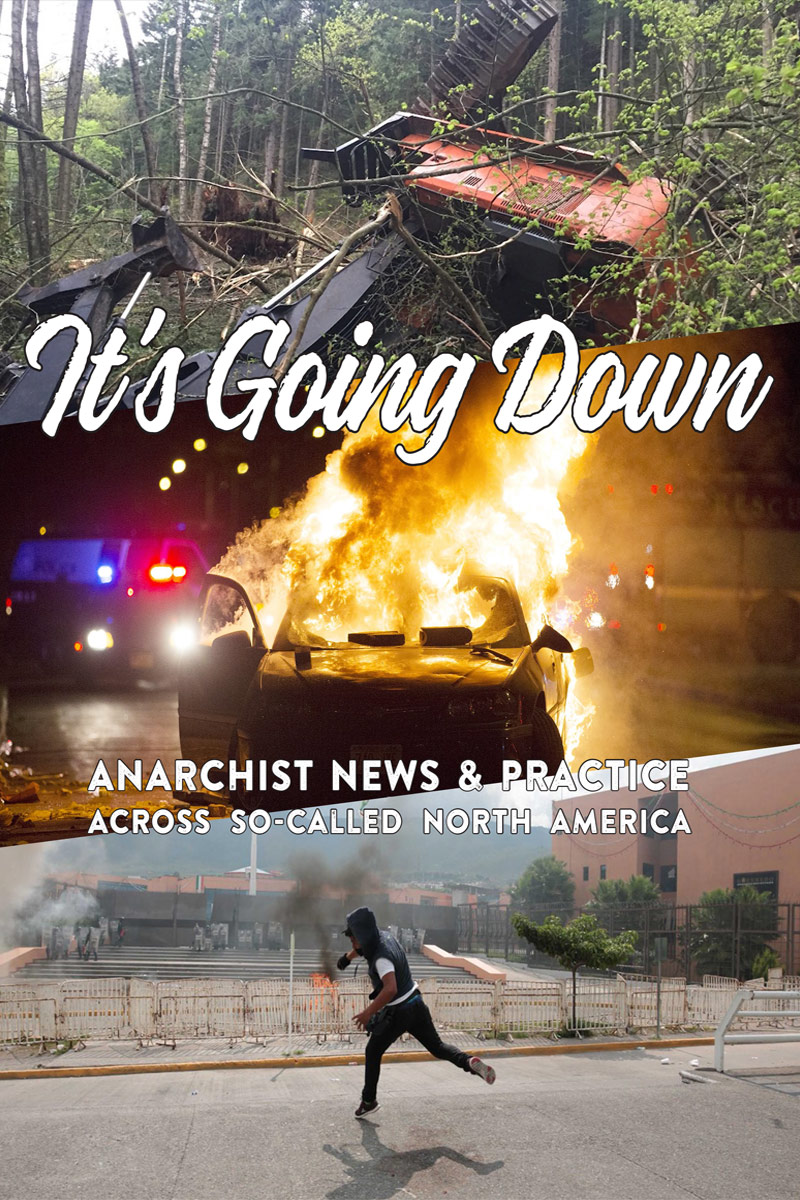 This is the second issue of the magazine published by the anarchist counter-information project ItsGoingDown.org. The magazine presents a selection of articles featured on the website over the past several months combined with a comprehensive list of actions and an extensive resource list for those seeking more information. It’s a great introduction to anarchist activity and a nice retrospective of the past several months.