The following zines and pamphlets were published in March of 2017. We present them here hopefully to increase their reach and to facilitate the spread of anarchist counter-information. Copy and destroy!

Zines and Pamphlets Published in March 2017 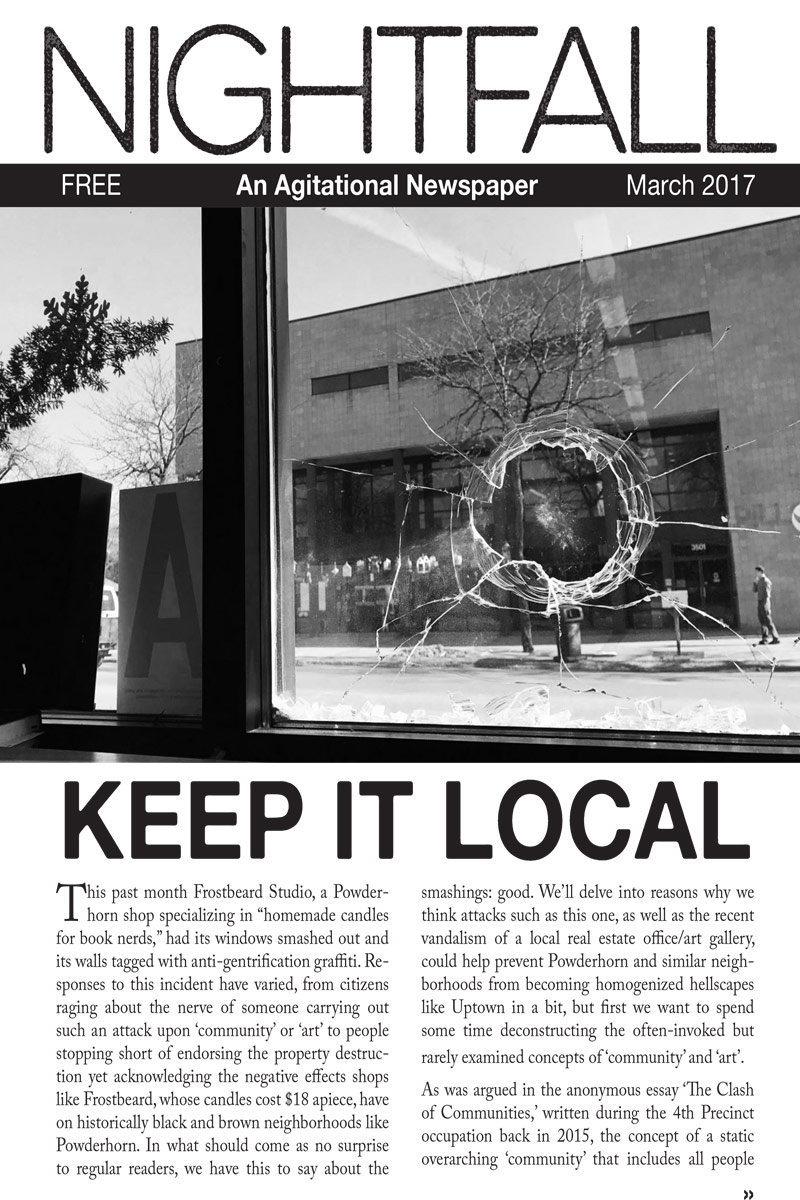 This is the fifth issue of the Twin Cities-based anarchist publication NIGHTFALL. It continues to be a great example of a local anarchist counter-information project, with the usual chronology of actions, guides to security and wheatpasting, announcements of new projects and initiatives, and a longer piece that looks at local businesses, gentrification, and property destruction.

This is the Spring 2017 of the anarchist prison newsletter “Spring is in the Air” which is produced by folks in St. Louis and distributed to prisoners throughout the Midwest. The newsletter features an original account of the inauguration protests in Washington DC, an update on the prison uprising at Vaughn Correctional Center in Delaware, and excerpts from letters written by prisoners in response to the last issue. 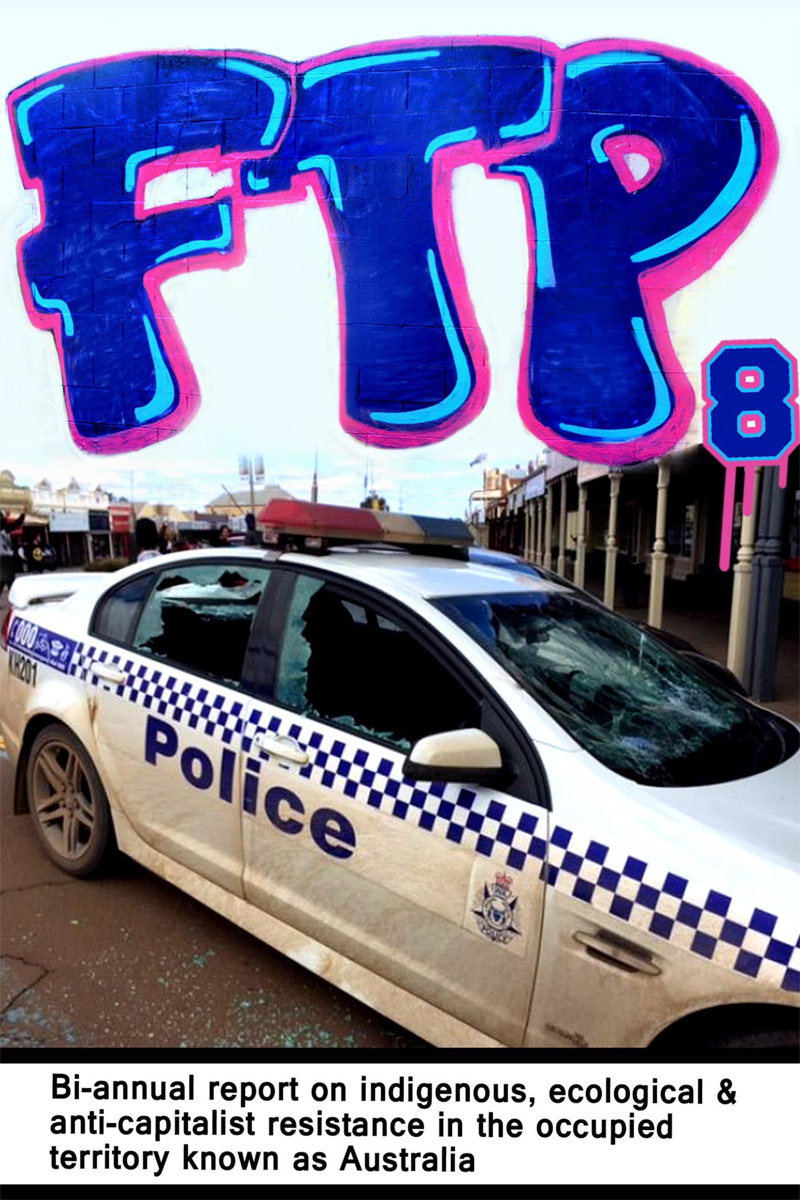 FTP is a “bi-annual report on indigenous, ecological & anti-capitalist resistance in the occupied territory known as Australia.” As such, this zine features a wide-range of actions compiled from communiques and news reports. There are a lot of photos interspersed with the text, making this a great way to learn about what is happening in Australia.

The Real Death of Politics 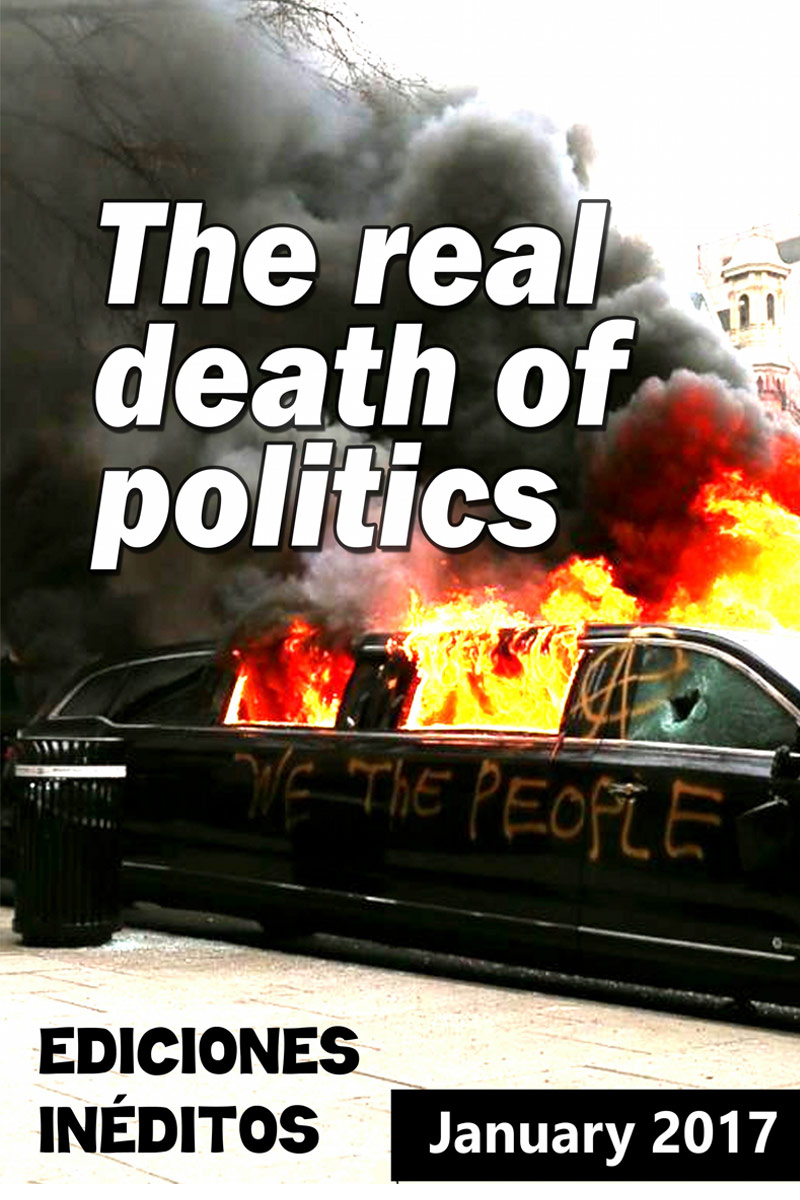 This is a text by Ediciones Ineditos and formated into a zine by Subversion Press that attempts to analyze the current political moment and to figure out what it means to act in the present. It’s heavily informed by communization theory and as such is oriented around the question of how struggle in the present can be a step towards communism. It illuminates some limitations with not only the leftist approaches being advocated by many but also the approaches of at least some insurrectionary anarchists. It’s a thoughtful piece that will hopefully contribute to discussions around strategy. 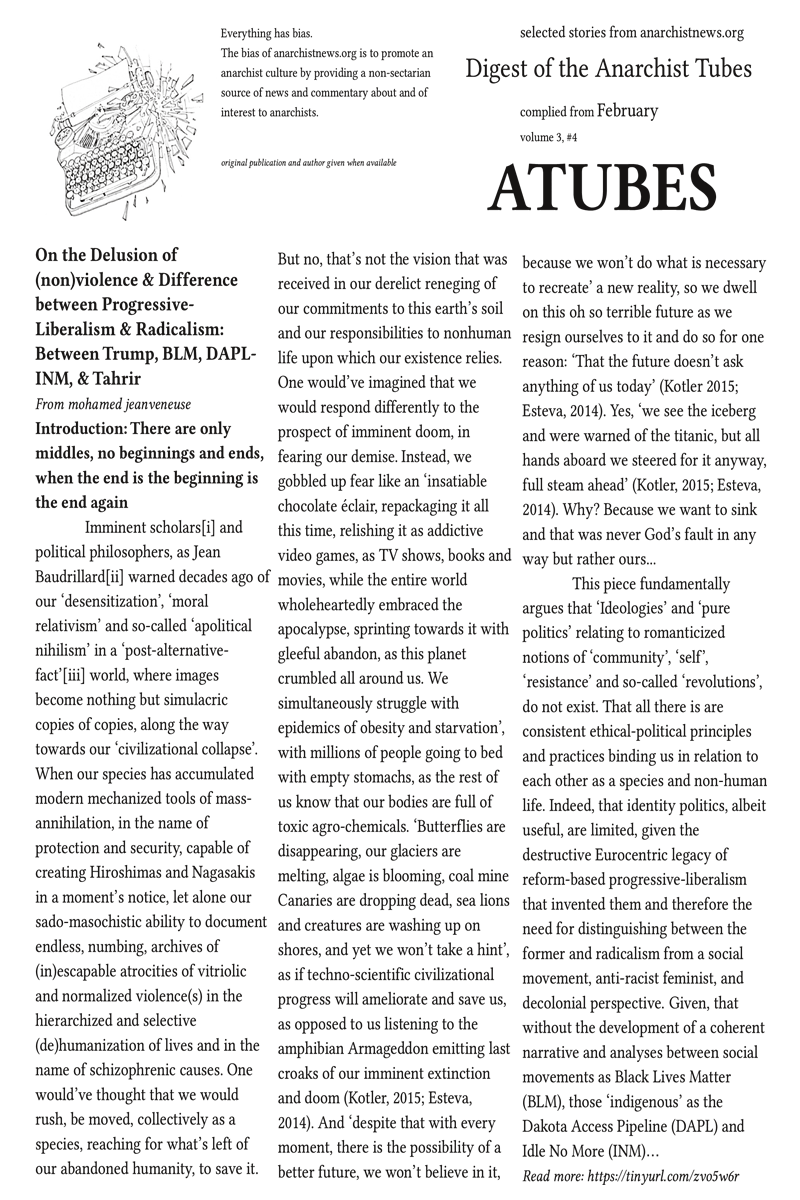 This is the February 2017 edition of ATUBES, a short 4 page publication collecting texts that appeared on the Anarchistnews.org website. This edition features the following articles: “On the Delusion of (non)violence & Difference between Progressive-Liberalism & Radicalism: Between Trump, BLM, DAPL-INM, & Tahrir”, “A Very Distinguished Fucking Anarchist”, “Anarchists for Peace and Free Speech”, and “The Anarchists vs. the Islamic State.” 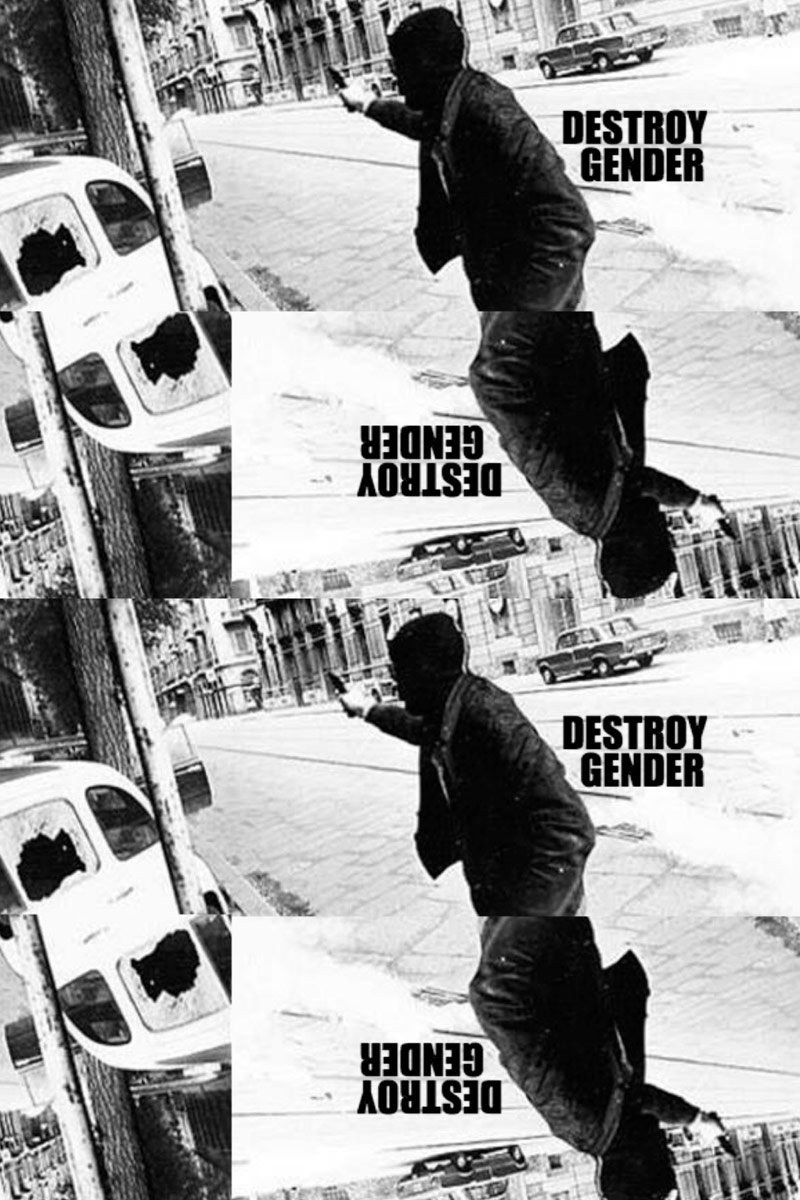 This zine collects three pieces that were originally written for the website Filler PGH and circulated online. The three essays are critique gender and identity from an insurrectionary anarchist perspective and offer an alternative to the discourse of identity politics that is so common in many political spaces. From the back cover of the zine:

Gender is a hierarchy, an apparatus of governance, a form of social control. Gender is violence… until we create more than just safe spaces, but dangerous spaces from which to wage war against patriarchy, gender, and all governance.

Until insurrection pushes us beyond the point of no return.

Until we no longer need identity.

It’s a provocative collection of essays that serves as a useful introduction to critiques of gender identity.

Every Cook Can Abolish Governance 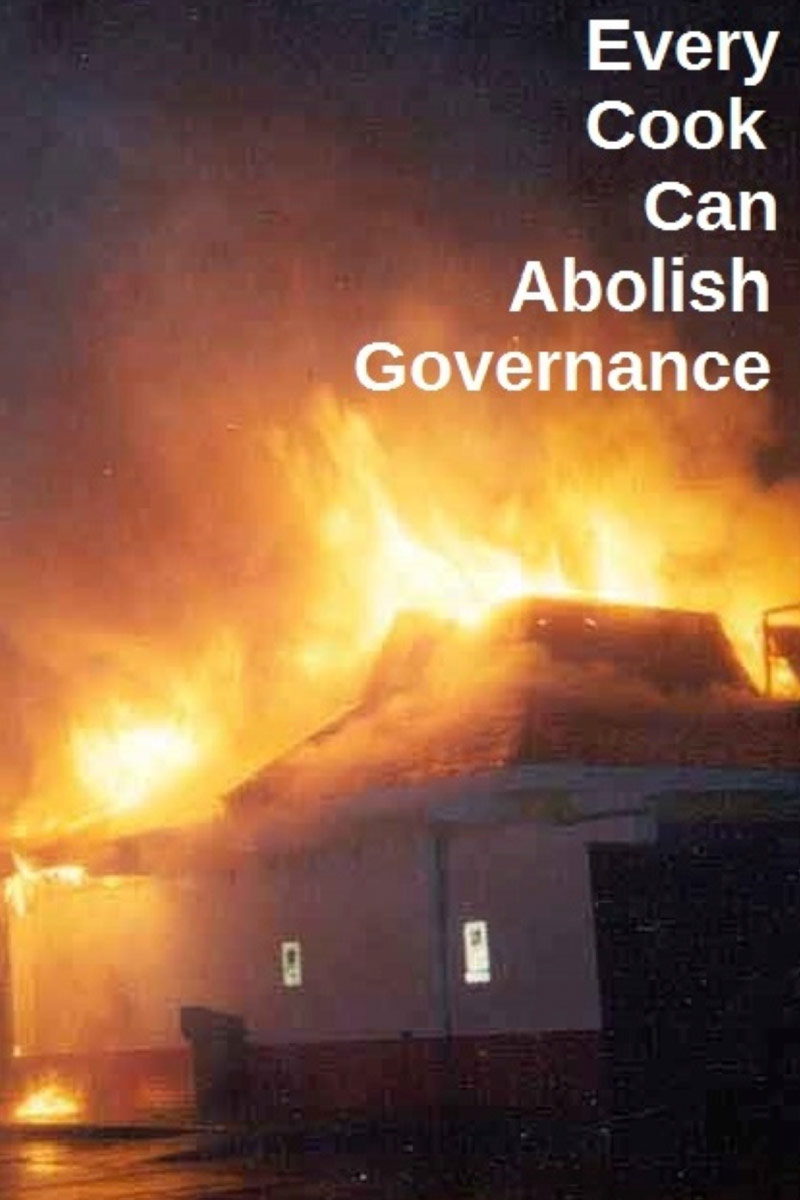 This zine is a short anti-work text that critiques the institution of work through the lens of the author’s experience in the restaurant industry. It’s a tale that should resonate with anyone who has worked in the restaurant industry. Stepping away from the author’s personal experiences, it sdoes a decent job of highlighting the absurdity of work in 21st century capitalism. 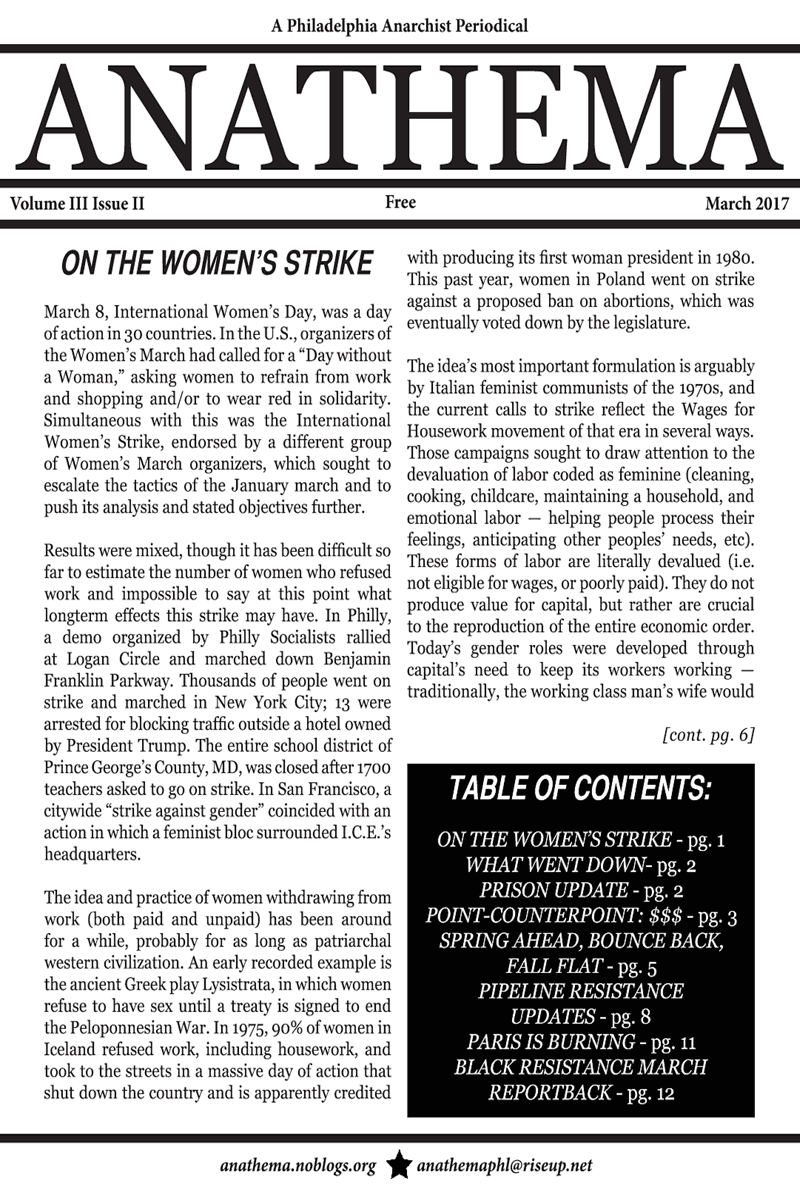 This is the most recent issue of Anathema, a counter-information publication out of Philadelphia. It continues to be a good example of a local counter-information project, with news and analysis about what is happening in the city Some of the debates over the role of money in political projects and the women’s strike offer local perspectives on national issues and may be of interest to others outside of Philly.

This is a printed magazine by the crew that does Montreal Counter-Information. The first issue collects news from the website spanning the years 2015 to early 2017. It offers not only a great retrospective of what has happened in the city, but also offers a vision of what a seemingly vibrant and diverse anarchist space could look like. The publication is very well put together and is a fitting accompaniment to what is already a solid counter-info project.

A Step-by-Step Guide to Direct Action 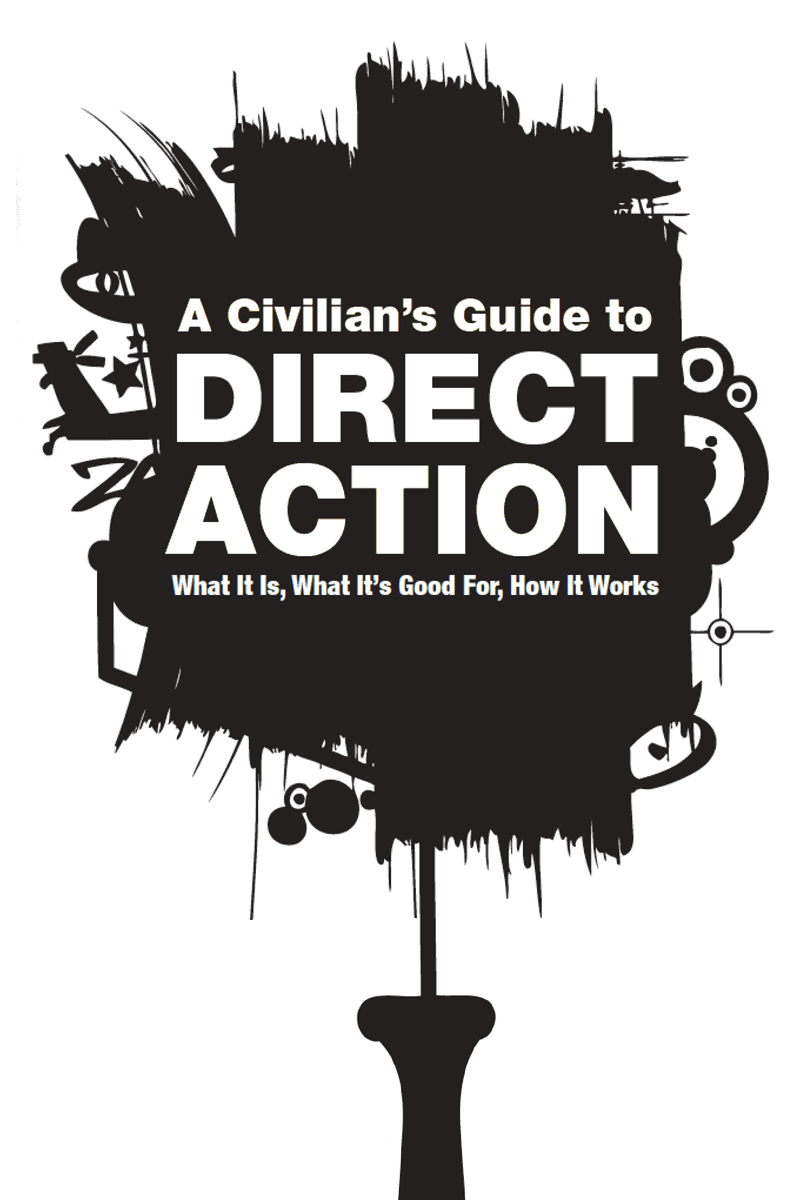 This is an updated version of the a direct action primer published by Crimethinc and distributed across the country for the past several years. It covers the basics of what direct action is, what is for, and how it can be implemented with sound advice on choosing, planning, and undertaking actions. The wide-ranging guide addresses security and legal concerns, discusses the question of engaging with the media, and the importance of evaluating actions after the fact. It’s an important guide that should be spread widely. 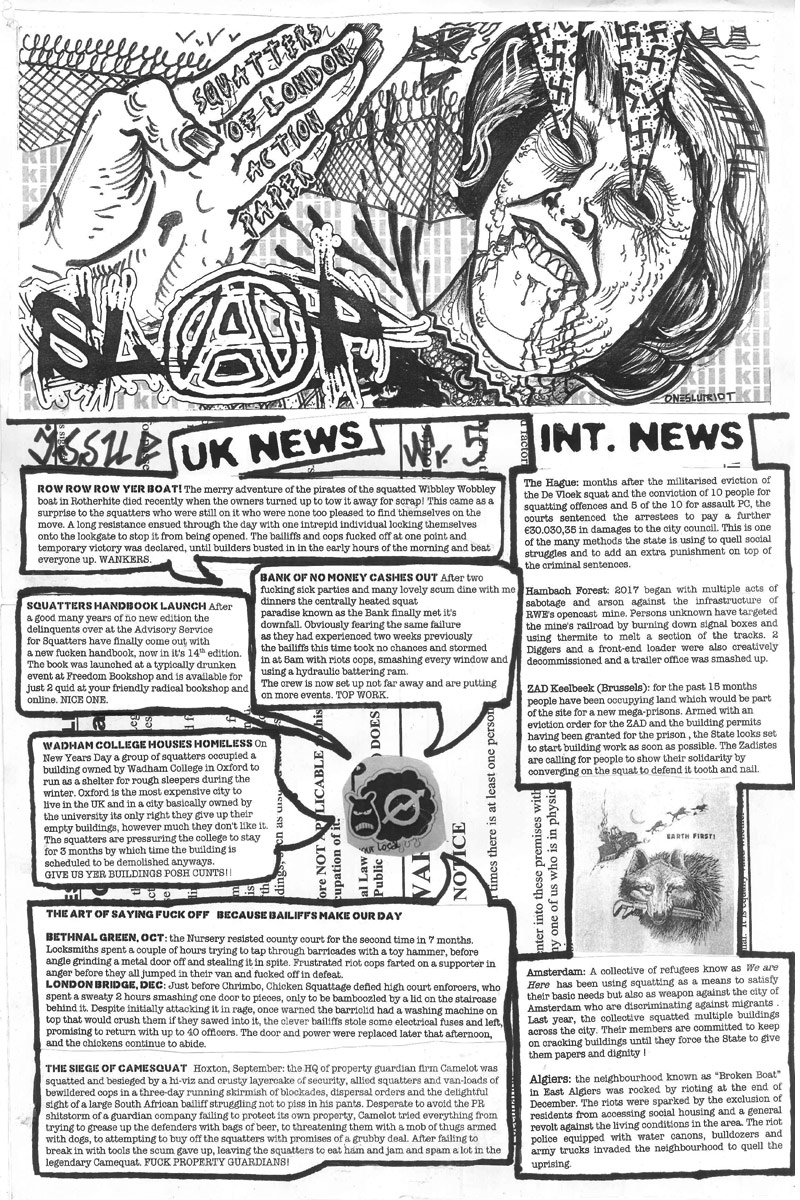 This is less of a zine and more of an “info sheet” covering the squatting scene in London. It gives a brief snapshot of what is happening in London’s squats alongside a few updates on the international squatting scene. It’s a nice example of the diverse forms that anarchist counter-information can take and is worth checking out for that reason alone.

Putting into Practice: Adding to the Conversation on Anarchist Activity in Montreal

This text responds to an essay titled “Mise en Commun” that critiques insurrectionary projects and practices as they have been used in Montreal. While the original is only available in French, this response in English engages closely with the aforementioned text and makes a strong attempt to respond to the criticism and clarify perspectives. From an outsider, this seems to be a decent example of what robust dialog between different anarchist perspectives can look like. Much of the discussion is rooted in the question of how to respond to gentrification, with specifics exploring communication, mass movements, anarchist intervention, strategy, isolation, and specialization.

This new zine by Opaque Editions compiles two essays by A.G. Schwarz: “The Spirit of December Spread ‘Round the World” and “Signals of Disorder: Sowing Anarchy in the Metropolis”. The first explores questions raised by many international comrades around the Greek insurrection in 2008, specifically the question of why the insurrection did or did not “spread”. When it was originally published many years ago it briefly articulated the idea of “signals of disorder” whereby certain acts of disorder suggest to people that further acts are possible. This concept is explored more in the second essay, both as it relates to anarchist activity and how it can be a potential challenge to capitalism. 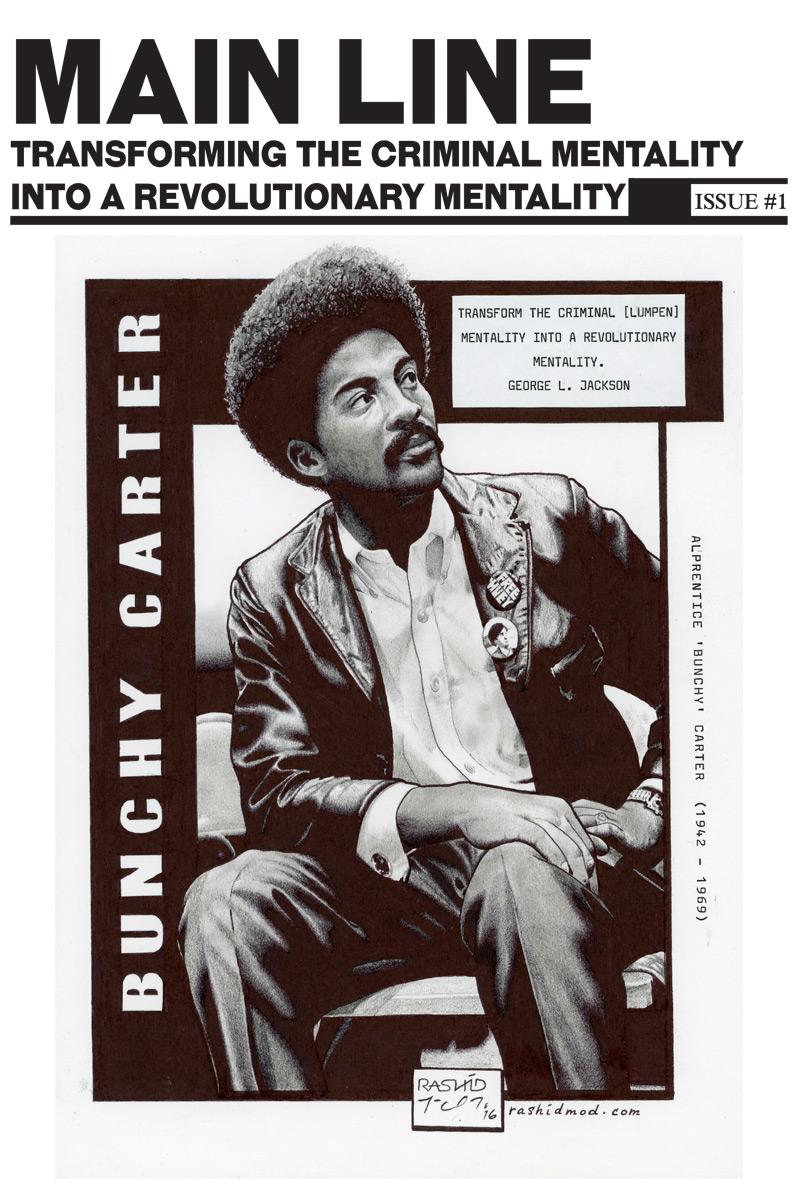 This is a new publication produced by political prisoner Kevin “Rashid” Johnson. It features writings from Johnson and a discussion of the politics advocated by the New Afrikan Black Panther Party – Prison Chapter. The publication focuses primarily on the “lumpen proletariat” or what is often known as the criminal underclass. To that end, it features a lengthy interview with Johnson by Anarchist Black Cross member Anthony Reyson and two other essays.

This is a personal text by an anarchist from the United Kingdom who has considered herself an anarchist and vegan for 12 years. Rather than advance a specific political program or viewpoint, it is written to stimulate discussion around the concepts of anthropocentrism and the dominance of human-centered conceptions of anarchy within the anarchist space. 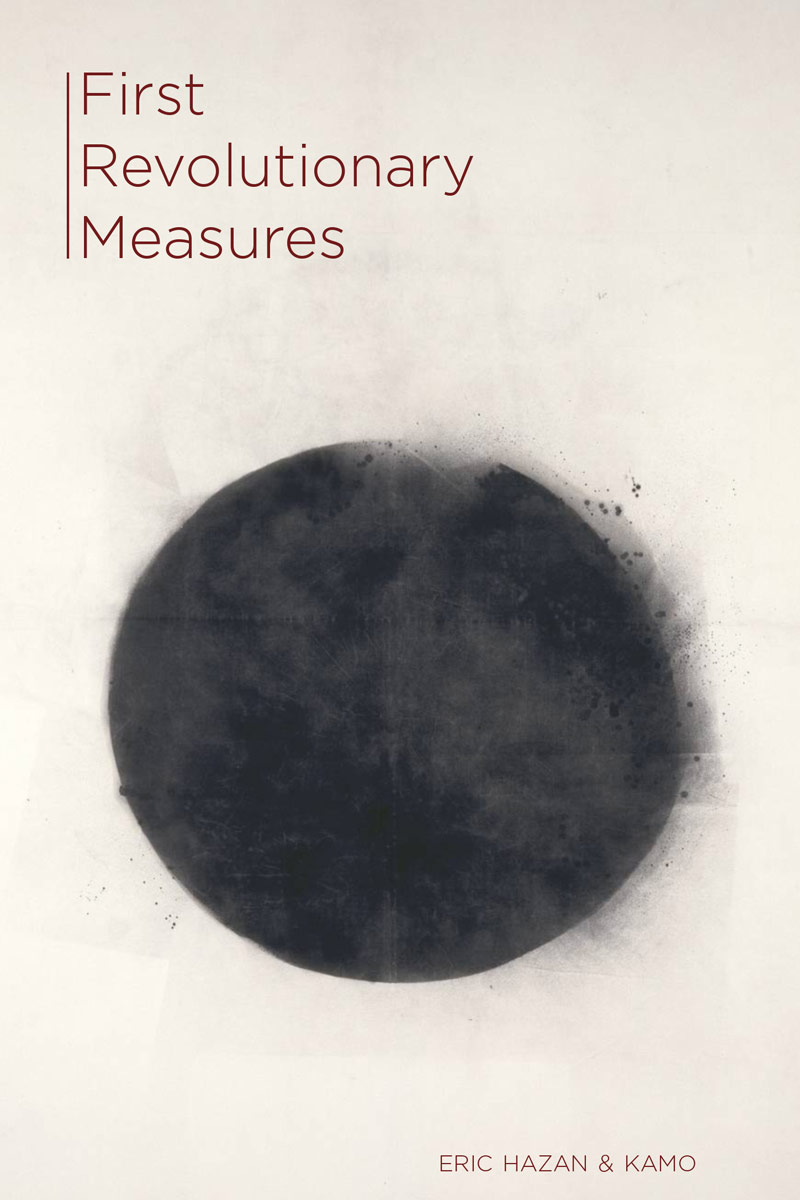 This edition is a reprint of a book by French author Eric Hazan and an anonymous group of French revolutionaries known as “Kamo”. From the intro:

The modest aim of this book is to reopen the question of revolution. It does not hold forth on the present catastrophe or demonstrate ‘scientifically’ the inevitable breakdown of capitalism; nor does it speculate on whether an uprising is just around the corner. The coming insurrection is our starting point — what it ushers in, not what it draws a line under.

This is the sixth issue of the Transmetroplitan Review, an anarchist newspaper published in the Pacific Northwest. This issue features a brief introduction to insurrectionary anarchism, an analysis of the situation in Seattle, and a feature on the “poster wars” between fascist and anti-fascists. The following excerpt from a blog post announcing the issue is worth keeping in mind:

“Now more than ever, we need as many anarchist voices as possible to counter bourgeois liberal vagaries and ultra-right propaganda.

Be relentless in the coming days and make sure a counter-narrative is introduced that reveals the contradictions of this swiftly collapsing empire. Challenge every enemy who reveals themselves and hammer at whichever cracks begin to appear in the walls built to contain us. Find four friends and develop a militant praxis with them. Engage at whatever level you are able. Good luck. See you soon.”