The following zines were published over the past month or so within the broad anarchist space. As always, we encourage folks to read, discuss, and engage with the ideas within. Organizing study groups, talk about them with your friends, leave copies in random places, or write scathing critiques of the ideas contained within and circulate them widely. Anarchist ideas are sharper when accompanied by a robust dialog and debate.

If you have suggestions for titles to include next month, let us know. 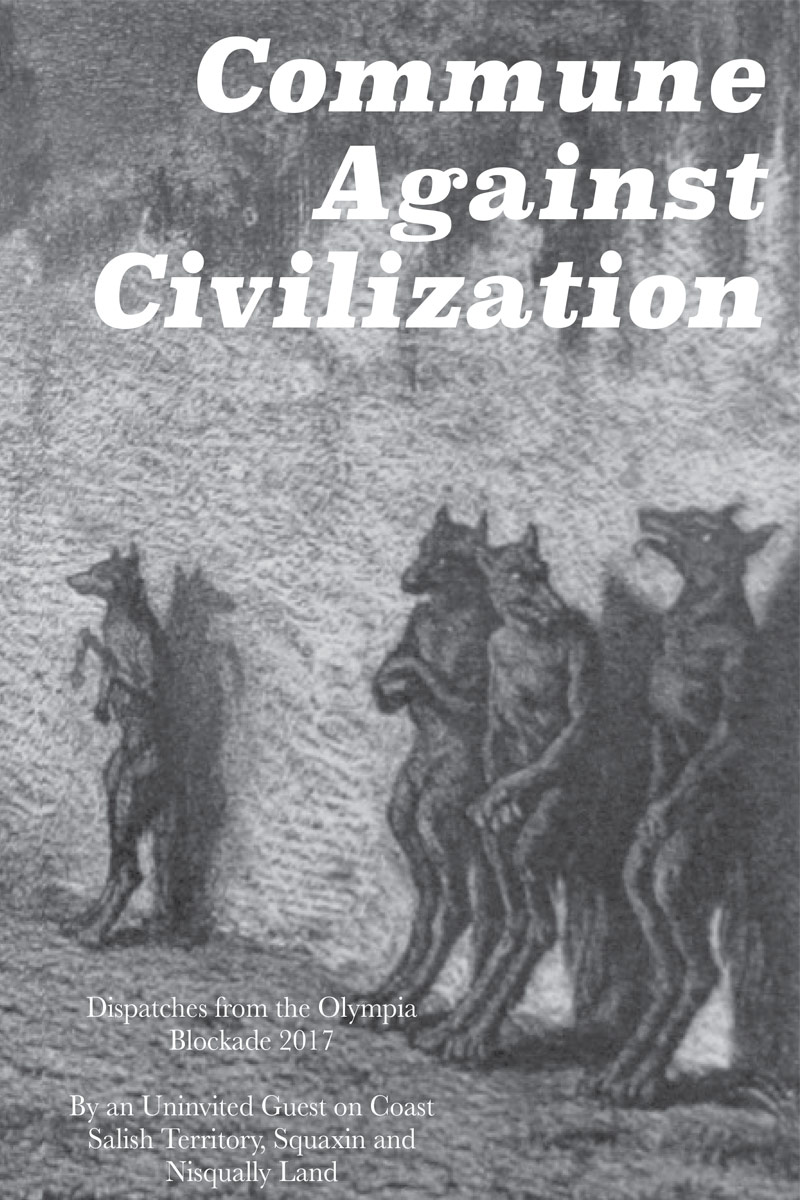 This zine is a collection of texts that were published in a newsletter produced during a 12-day long illegal occupation on railroad tracks in Olympia, Washington. In the introduction there is an overview of the blockade and the general context in Olympia, while the four sections of the essay explore broader political themes. The zine is about far more than just the blockade, with the author(s) writing strong critiques of syndicalism, pro-civilization anarchists, and more. In response to these tendencies, the texts present an alternative of path of insurrectionary and anti-civilization anarchy. It also includes a lengthy list of suggested reading on these themes. 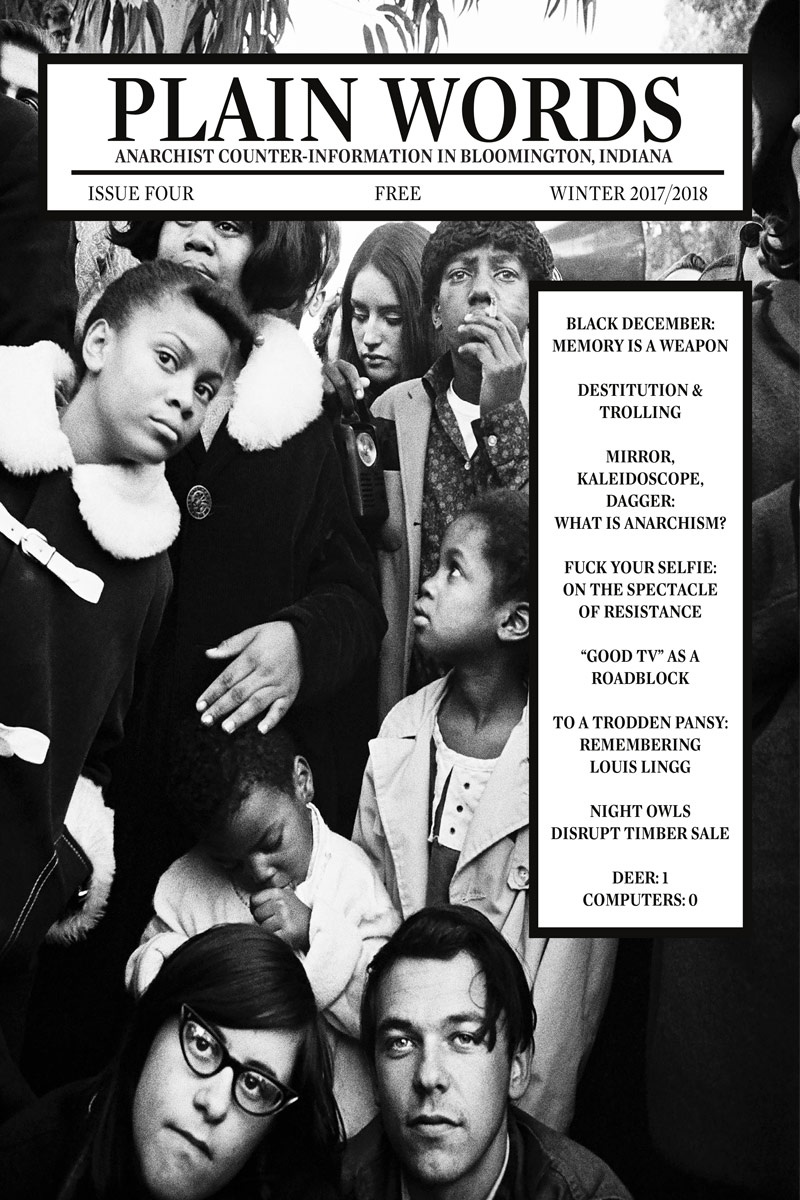 This is the fourth issue of a counter-information project based in Bloomington, Indiana called Plain Words. This issue features a few reports on actions in Bloomington (anti-logging and grand jury solidarity) alongside a number of longer essays. The stand-outs include “Mirror, Kaleidoscope, Dagger: What is Anarchism?” and an essay remembering the life of Haymarket martyr Louis Lingg.

Anathema is a monthly publication out of Philadelphia, Pennsylvania. The December 2017 issue features action reports, some analysis of things that have been happening in Philadelphia including a look at flash mobs taking place in the city, world news, and more. Inspired by the anti-fracking blockade in Olympia, there is an exploration of rail infrastructure in Philadelphia, which is an interesting example of how actions elsewhere can help sharpen local analysis. There is also an essay on John Raines who passed away recently. Raines was involved in a break-in at an FBI office in the 1970s where many documents about FBI surveillance of radical movements was uncovered. 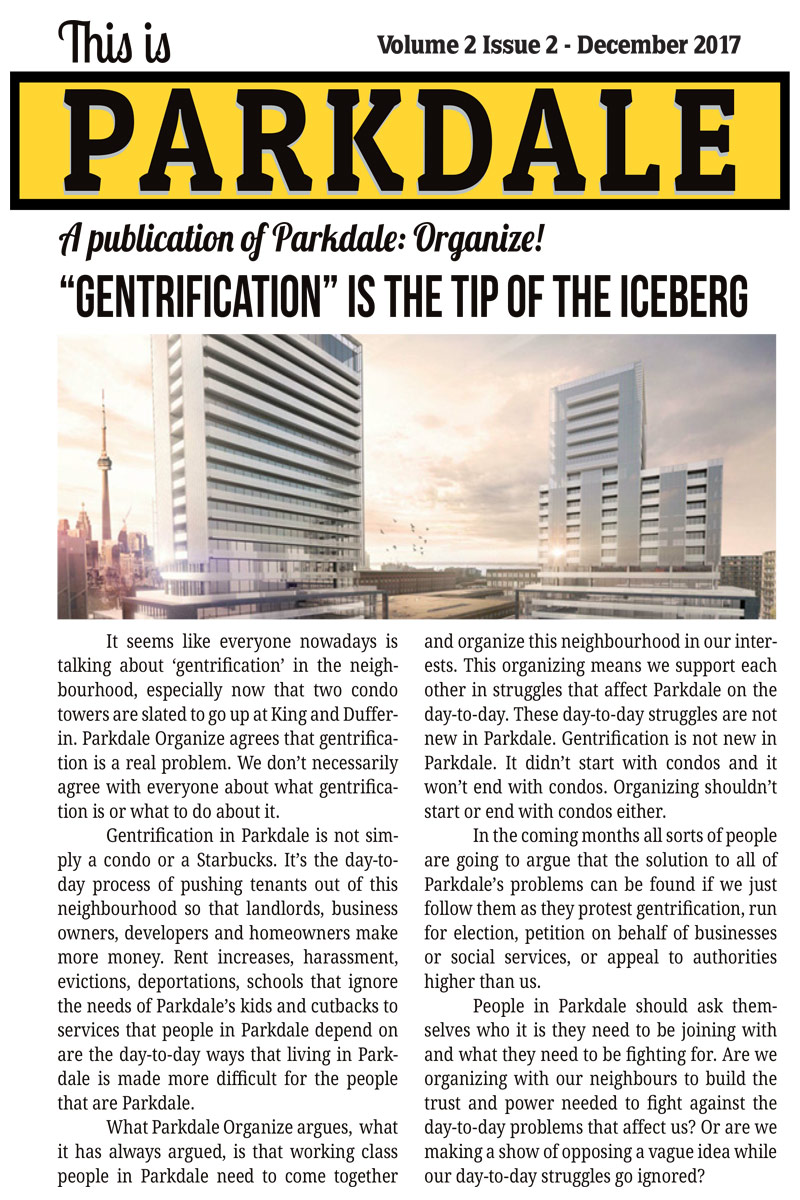 This is a newsletter published by a group called Parkdale Organize that is based in Toronto, Canada. They are a neighborhood-based group that is attempting to building working-class power in response to gentrification in the neighborhood. Among the efforts they have been involved with has been a three month rent strike. While the context is different everywhere, it’s interesting to see how this group is proposing that people respond to gentrification.

Below & Beyond Trump: Power and Counter-Power in 2017 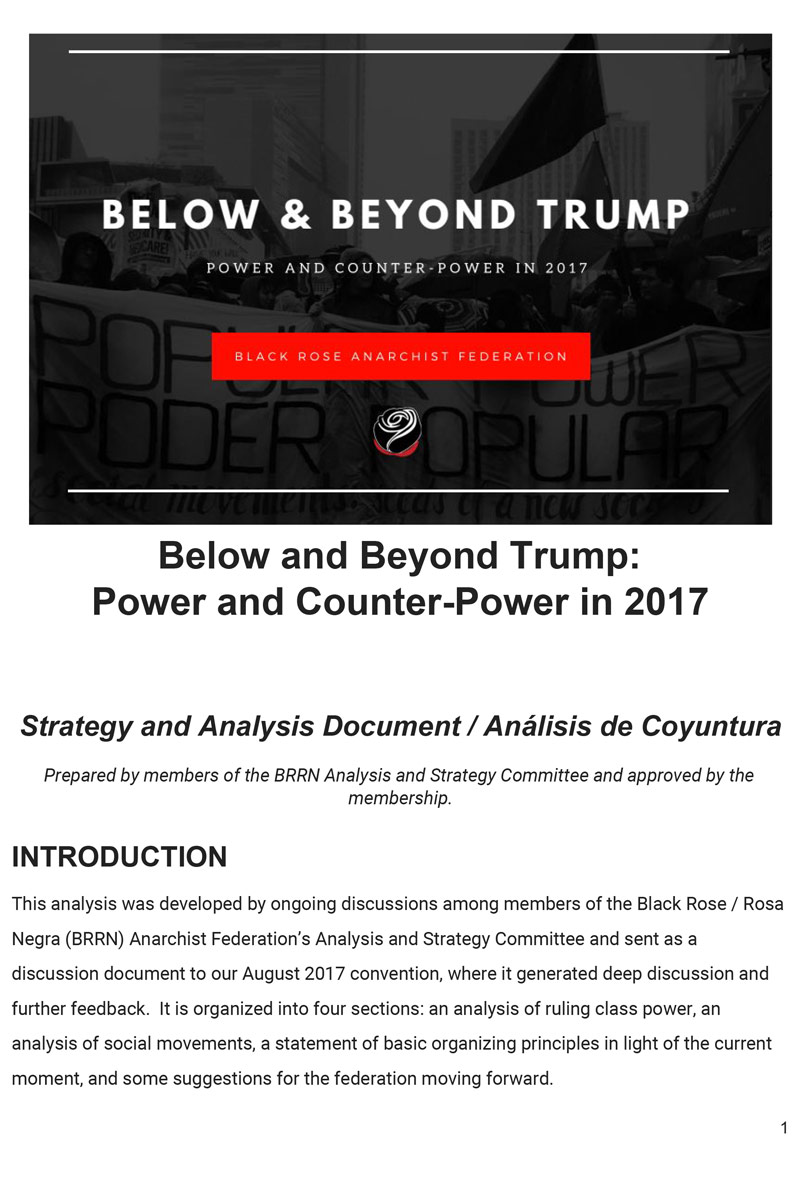 This is a “strategy and analysis document” published by the Black Rose Anarchist Federation. It provides an analysis of the political context for social anarchists in 2017 and the prospects for “pro-organizational revolutionary anarchists” to intervene in the current period. The documents focuses on (briefly) understanding ruling class power, social movements, and offers suggestions for a path forward. In response to their understanding of the contemporary period, they call for building social movements from below, offensive campaigns, and developing explicitly socialist practices and programs. It reads a lot like a political party platform with a lot of vague statements, sloganeering, and solutions.

The Things We Cannot Face 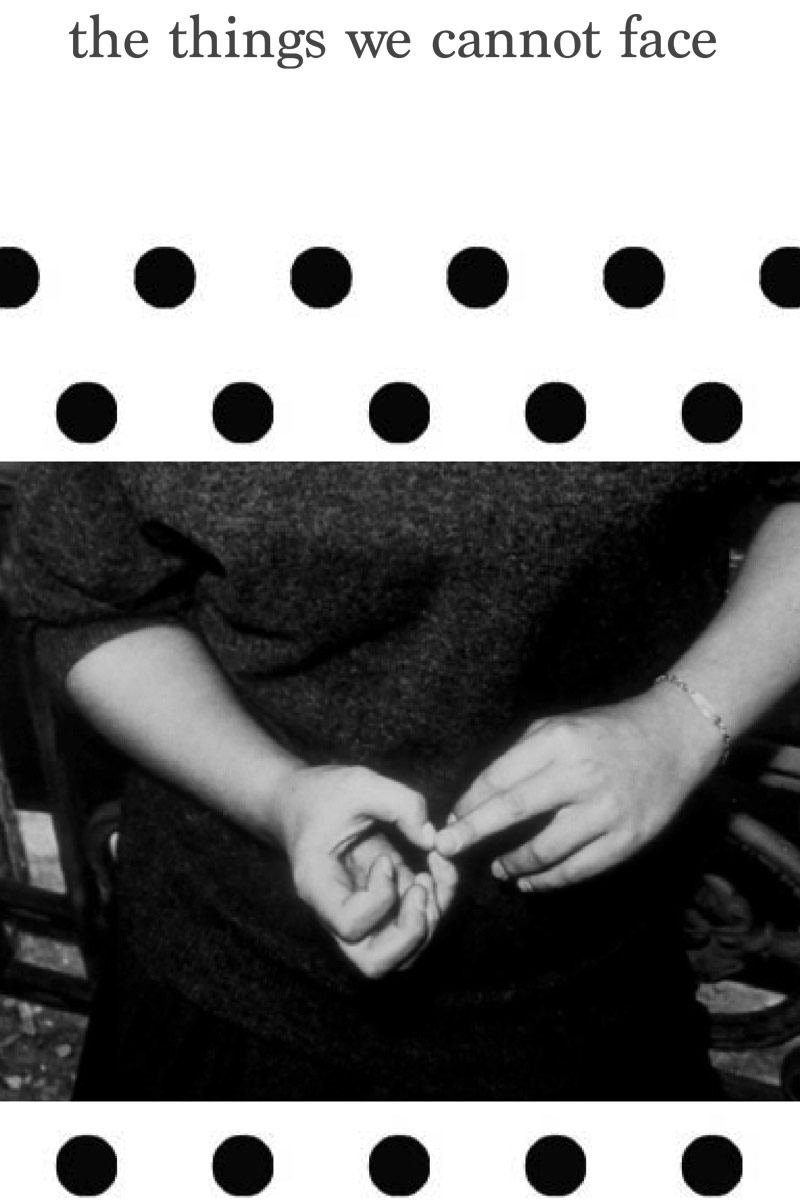 This is a zine formatted version of an essay that first appeared online back in October. It is an introductory piece to what will eventually be a series of explorations into the relationship between trauma, the self, and the general erasure of trauma from “organizing” in radical circles. In particular, it looks at how questions related to trauma are often relegated to the “personal life” compartment and seen as separate from political activity, rather than being something that both informs that activity and something that can be healed by it. The text includes a lot of general observations about discourses around trauma which will hopefully be explored in subsequent essays.

Beyond the “Movement” – Anarchy! 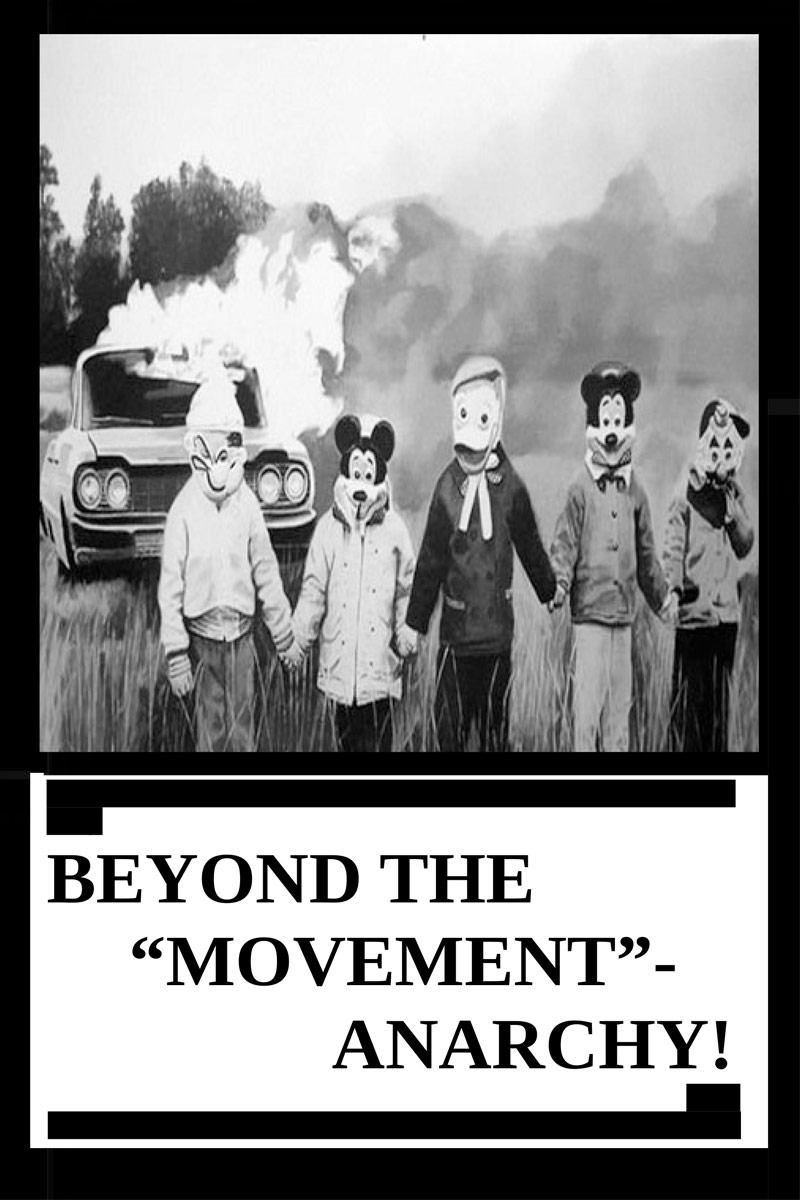 This short zine is a reprint by Warzone Distro of a text that appeared a few years ago criticizing the collectivist message of The Coming Insurrection, The Call, and Tiqqun. In this very vague engagement with those ideas, it mainly calls for a more individualized approach to revolt arguing that the starting point for any such project is the individual and the individualized decision to rebel. The text is skeptical of movements, social systems, identities, and ideologies, including those packaged and presented by both the Tiqqunists and the anarchists.

Setting Fire to the Church of Social Justice: 3 Critiques of Politics, Call-Out Culture, & Other Models of Statist Thinking 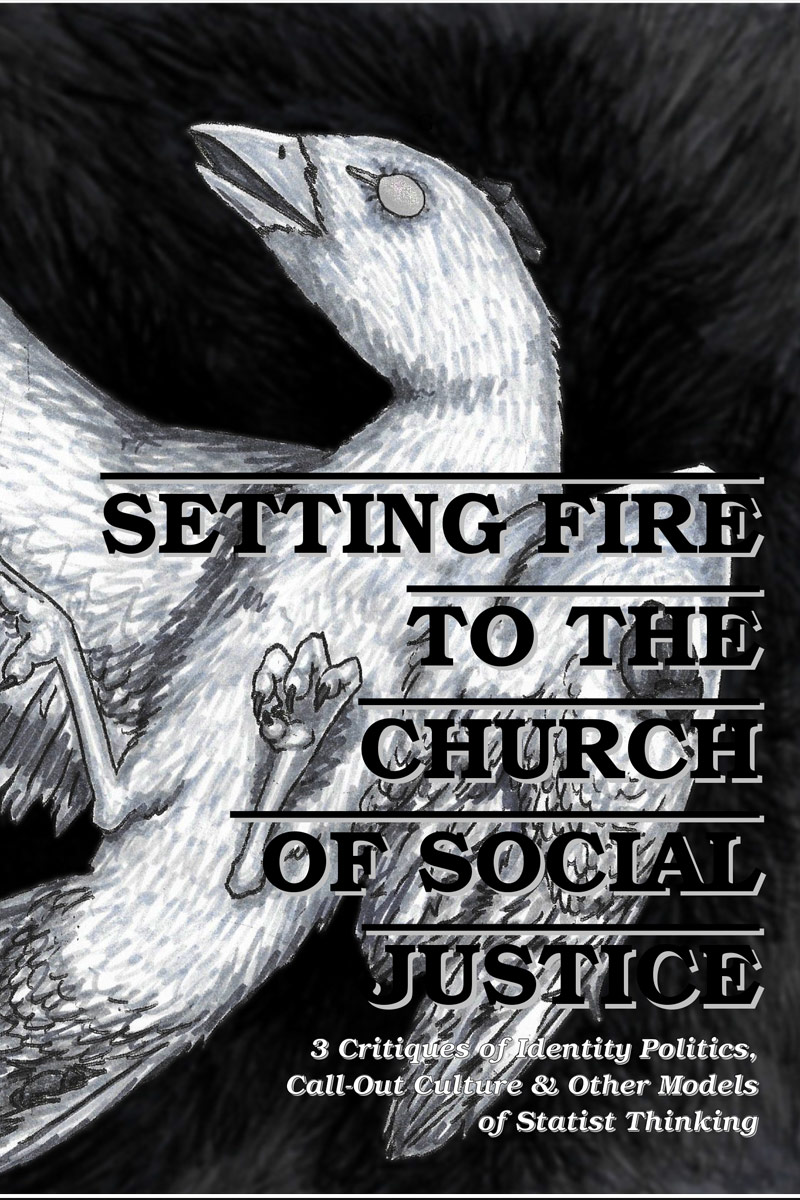 Published by Dandelion Distro, this zine collects three essays, “A Note on Call-Out Culture” by Asam Ahmad, “Questioning Rape” by Anonymous, and “Excommunicate Me from the Church of Social Justice” by Frances Lee. The bulk of the zine is “Questioning Rape” which is an essay reprinted from the zine The Broken Teapot. It’s an examination of the ways in which rape is engaged with in anarchist scenes and the limits to accountability processes as they are often used. It’s a challenging essay and is stronger with some of the responses in the afterward which is included in this version. The other two essays on call-out culture and purity in activist communities make some good points, but they are too short to really engage with the questions they raise.

This is a new zine by Crimethinc that collects the stories of three people who resisted a Grand Jury. It’s one of those zines that is essential reading for any one involved in radical communities as its helpful to learn as much as we can about how repression works in order to avoid having to scramble at the last minute when it happens. The zine does a particularly good job at presenting the human consequences of resisting a Grand Jury with the authors sharing many of the difficulties that they went through on an emotional and mental level when they chose to resist.