The following zines and pamphlets were published across the broad anarchist space over the past month. There are a variety of different issues discussed and perspectives articulated, some of which come into conflict with each other. It’s our opinion that anarchy is strongest when different ideas clash rather than promoting a false unity or theoretical hegemony.

As always, we welcome suggestions for next month’s round-up. Contact us with suggestions. Previous monthly round-ups can be found here.

Star Wars and the American Imagination 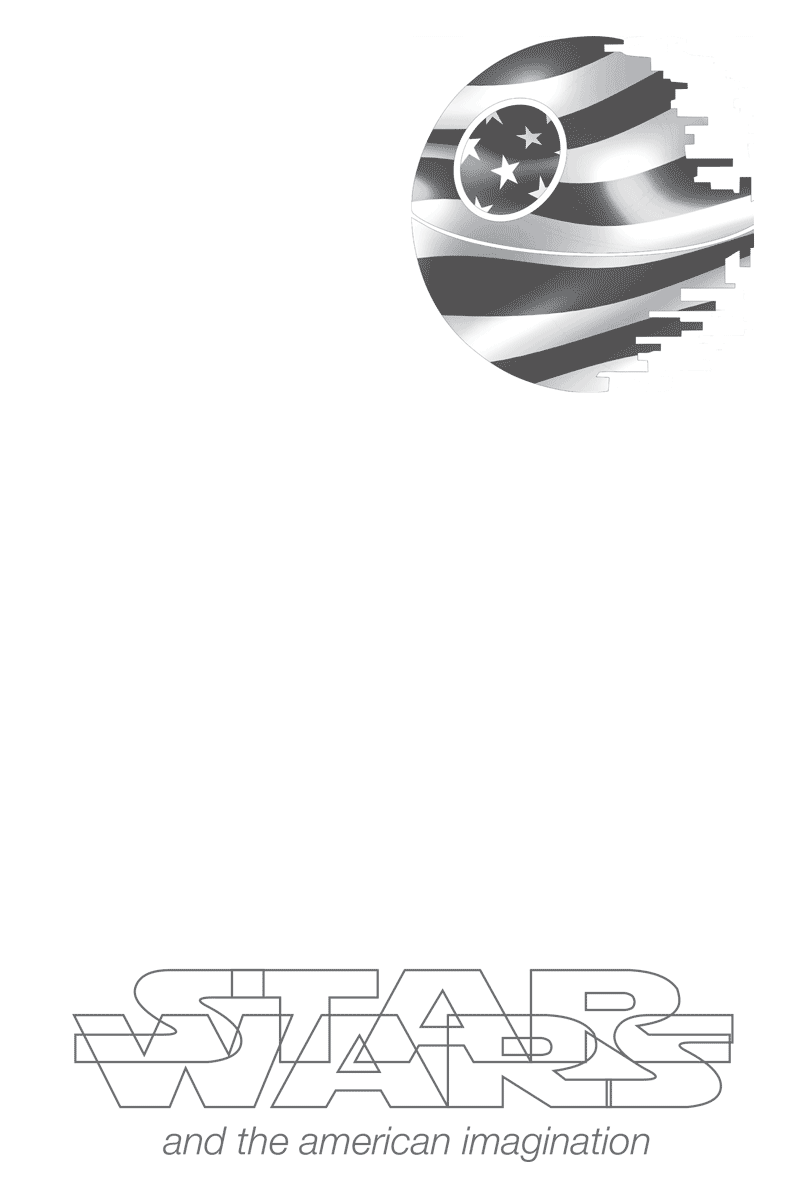 This is a short essay by Mumia Abu-Jamal excerpted from the compilation Octavia’s Brood: Science Fiction Stories from Social Justice Movements. It’s a reflection on why Star Wars became a cultural phenomenon and what that says about about American society. Specifically, it talks about the close relationship between the rebellion and the empire and the light side and the dark side as metaphors for American culture.

Some Notes on Antifascism 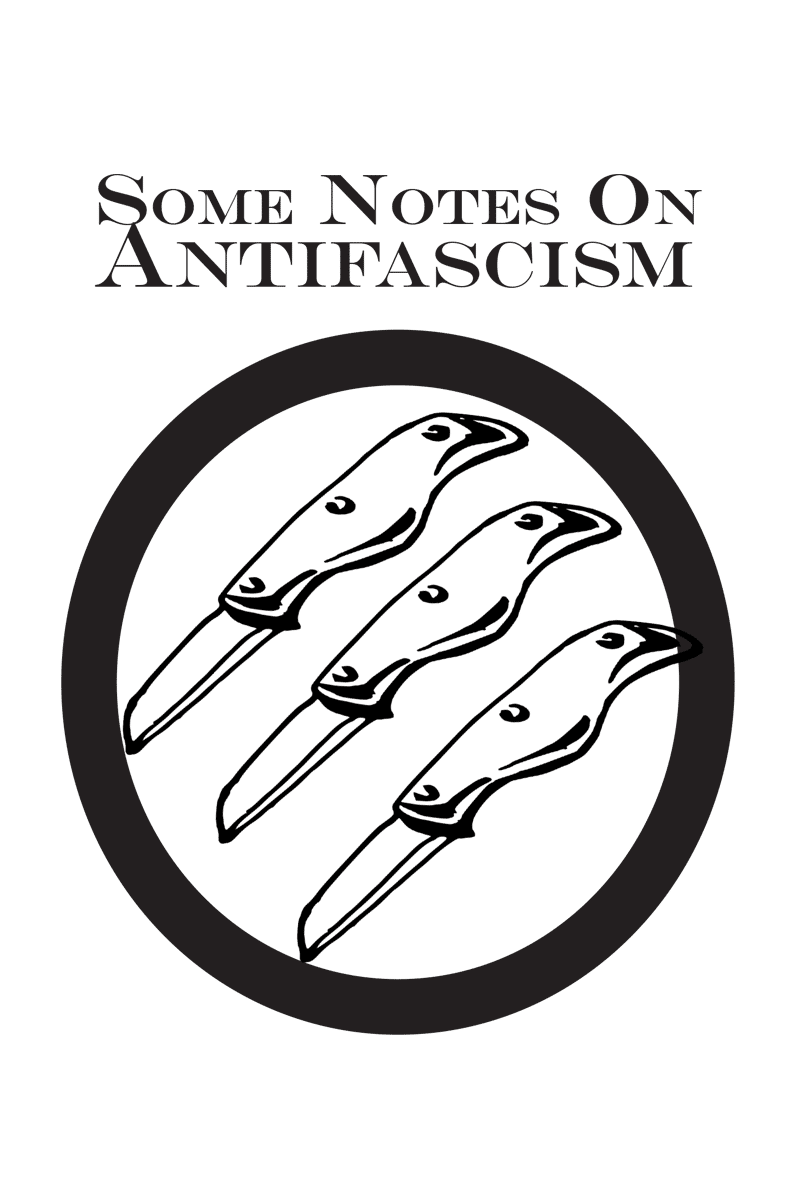 This zine from 1312 Press is a collection of two essays on the nature of anti-fascism. As everyone within the anarchist space (and even many in the broader world) know, anti-fascism became a major focus after Trump’s election with the rise of racist attacks and harassment. In the midst of this uptick in interest and activity, there hasn’t been a lot of time for reflection. This zine aims to change that by presenting the essay “On Antifa: Some Critical Notes” and “What Do Anti-Fascists Actually Believe?”. The first raises some friendly criticisms of antifa while the second responds to many of those criticisms from the perspective of long-term participants in the ant-fascist and anti-racist movement.

A Shift in the Balance of Power 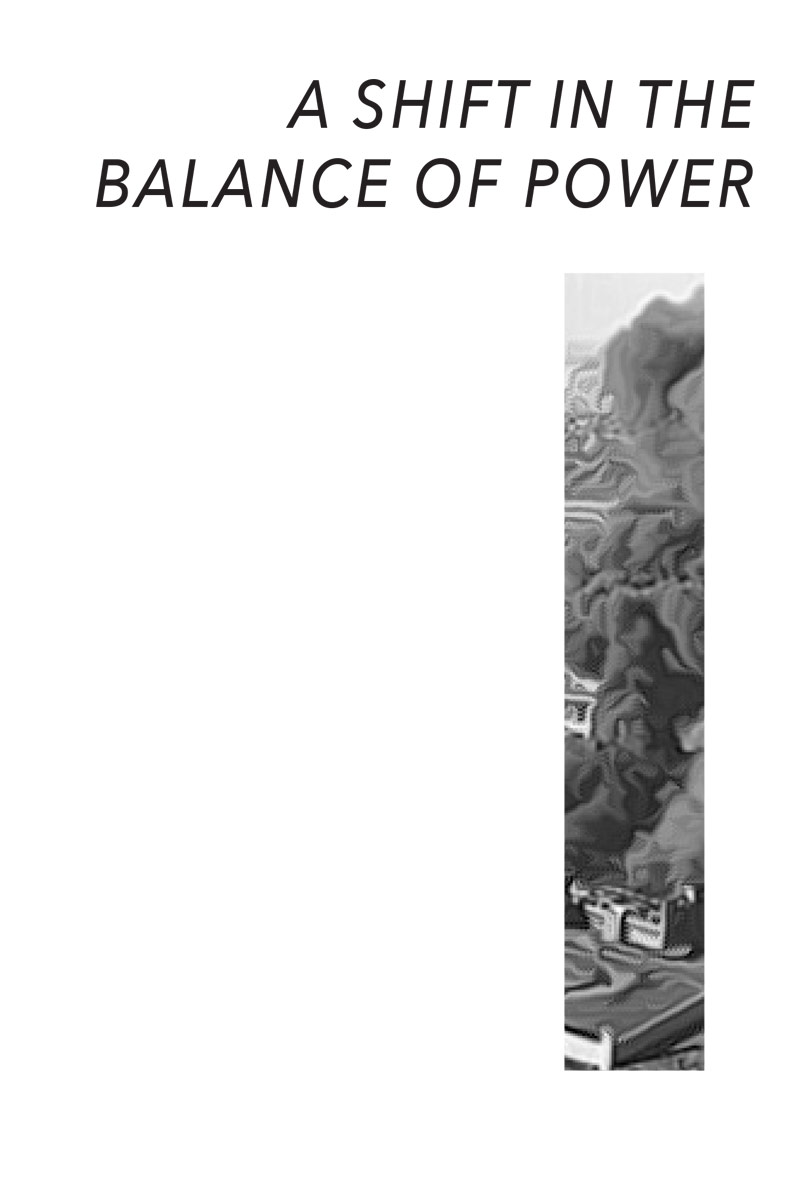 This zine is a short excerpt from the novel The Unseen by Nanni Balestrini. The novel famously deals with the Italian Autonomia movement and the repression that followed it. This excerpt gives an example of the author’s style while discussing the experience of one of the characters in a prison for radicals. Its discussion of prison as a spectrum – where compliance is gained by the threat of being somewhere worse – is an important distinction and something worth considering when we think about prison. 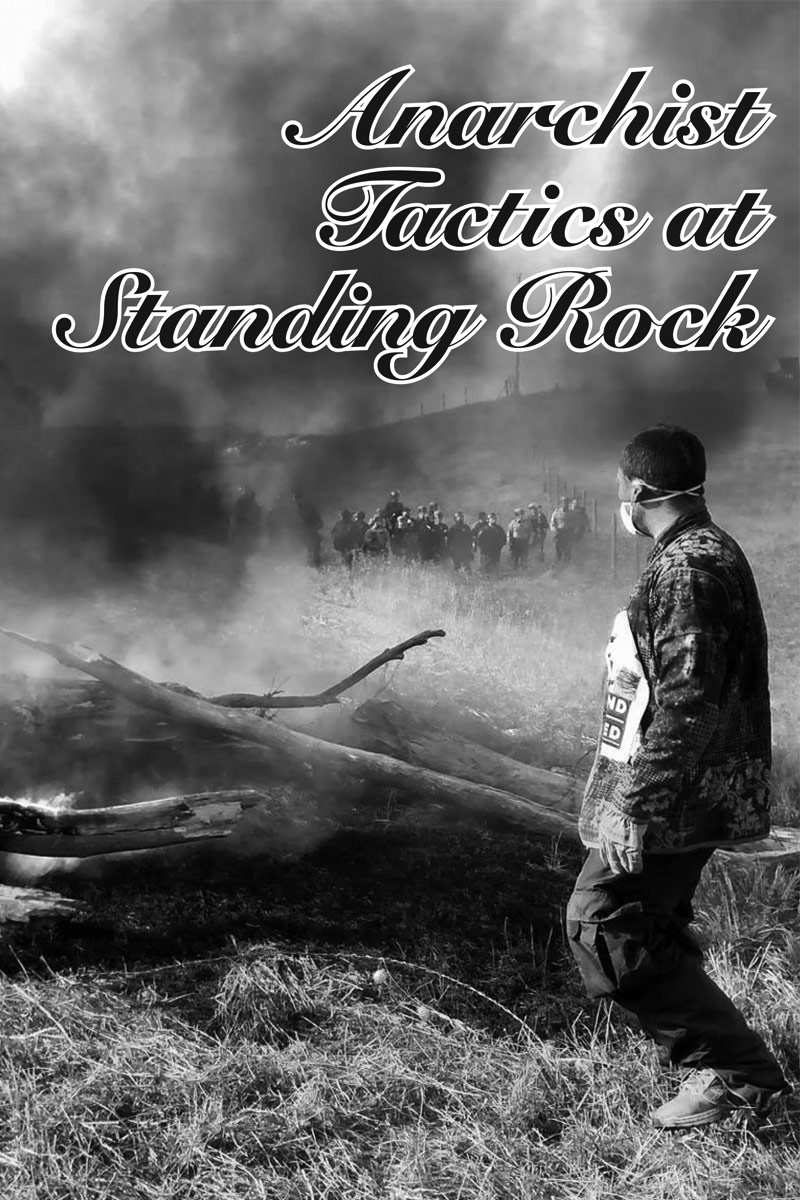 This zine reprints an interview from The Final Straw with an anarchist who was involved with the Standing Rock camps. There are a lot of valuable insights into how the struggle against the Dakota Access Pipeline played out on the ground with discussions about the dynamic between non-violence and a diversity of tactics, elders, allyship, and more. It’s definitely worth reading for people wanting learn from the highest profile anti-extraction struggle in the so-called United States.

This zine explores the Grand Jury that was convened in response to the Standing Rock encampment. It consists of an interview from The Final Straw with an anarchist legal worker who was involved in providing legal support for the hundreds of people who faced legal consequences in the aftermath of Standing Rock. The zine does a good job of talking about the importance of never cooperating with a Grand Jury, establishing a cultural of non-cooperation and refusal, and providing a clear explanation of how that can be done. 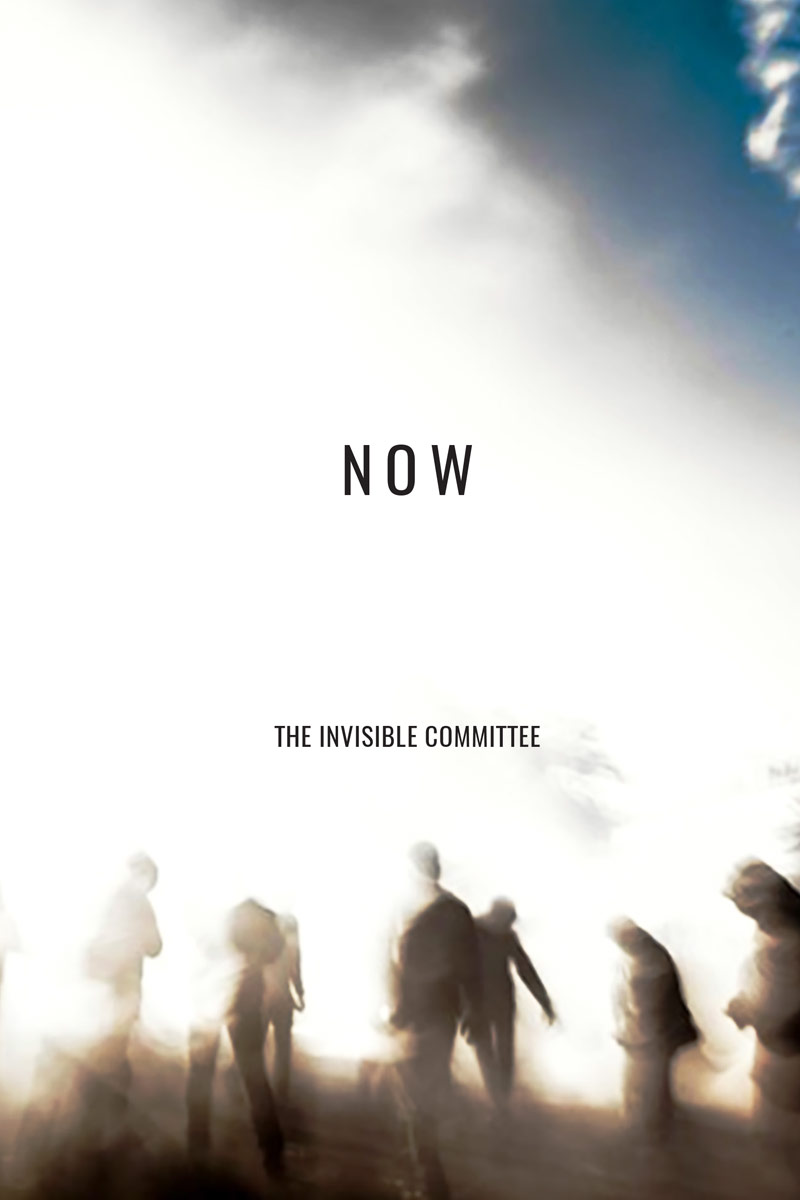 This is the latest from the Invisible Committee out of France (laid out by Ill Will Editions), well-known for The Coming Insurrection. This latest text is a follow up to To Our Friends which came out a few years ago and expanded on the ideas raised in The Coming Insurrection in light of a wave of worldwide revolts. It starts off strong with the chapter “Tomorrow is Cancelled” asserting:

“All the reasons for making a revolution are there. Not one is lacking. The shipwreck of politics, the arrogance of the powerful, the reign of falsehood, the vulgarity of the wealthy, the cataclysms of industry, galloping misery, naked exploitation, ecological apocalypse—we are spared nothing, not even being informed about it all. “Climate: 2016 breaks a heat record,” Le Monde announces, the same as almost every year now. All the reasons are there together, but it’s not reasons that make revolutions, it’s bodies. And the bodies are in front of screens.” 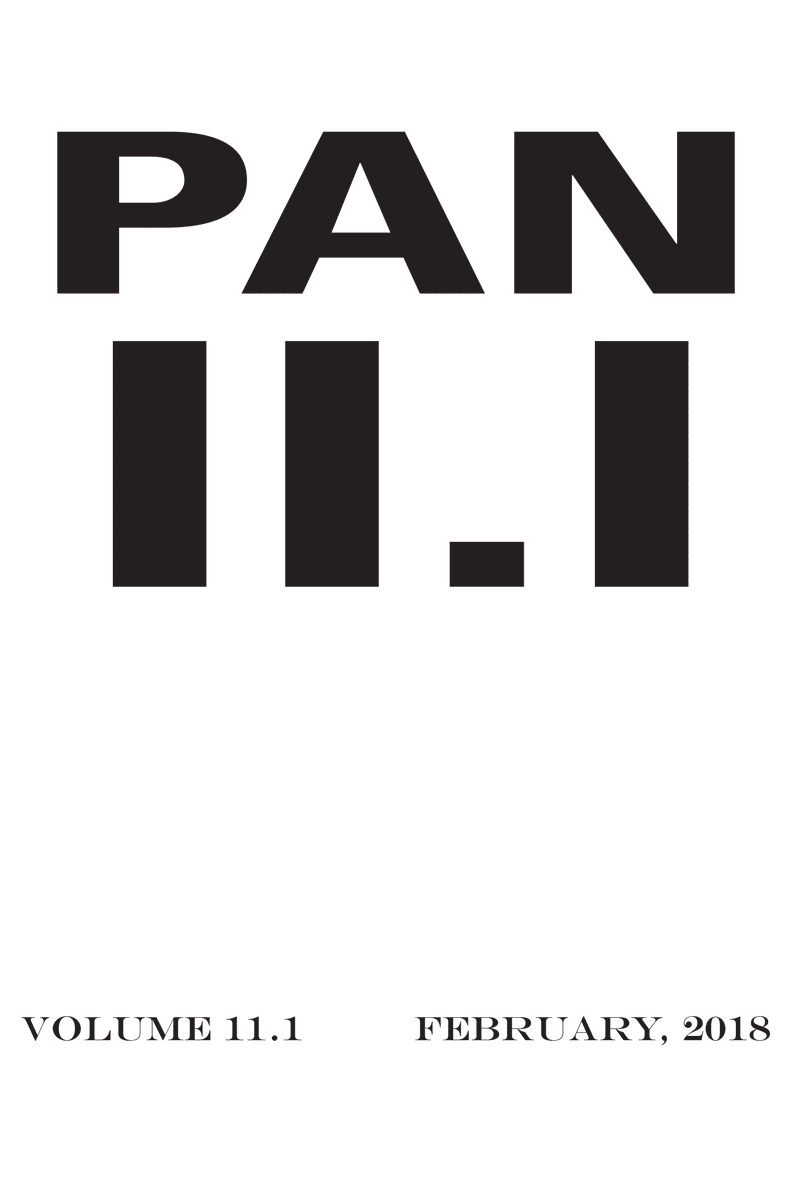 This is the most recent issue of Prison Action News, a newsletter for prisoners worldwide to report on their struggles and acts of resistance behind bars. It formed out of the 2007 Anarchist Black Cross (ABC) Network conference. This issue features the usual updates on prison groups, direct action, calls to action, etc. It’s a good place to get updates on what is happening behind bars.

Extract from Bang Up and Smash! 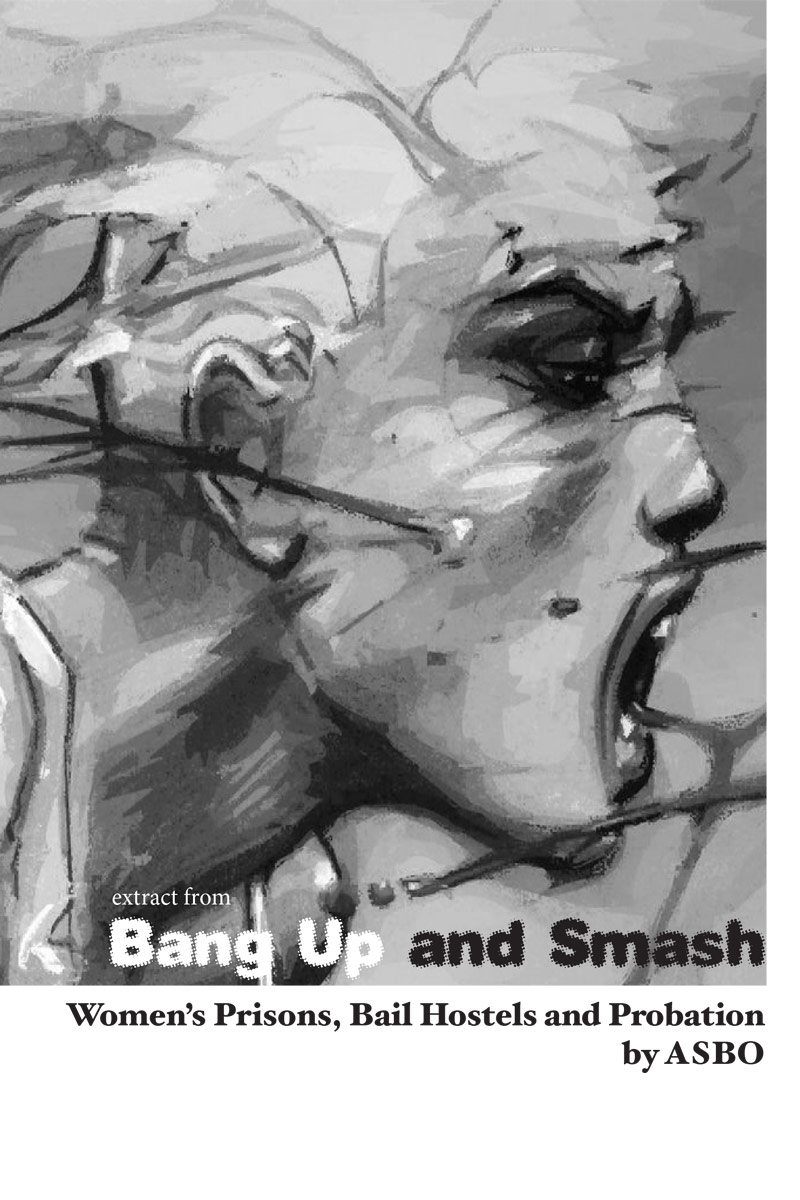 This is an extract from the booklet titled “Bang Up and Smash! Women’s Prisons, Bail Hostels and Probation” about the prison system in the United Kingdom. Some of the goals elaborated in the intro include providing ideas for people facing prison, to highlight gender issues and feminist analysis, to provide an anarchist critique of “prison abolition”, and to discuss how the frameworks of control developed in prison extend far beyond prison walls and create a “prison society”. The full book will be published later this year and distributed by Active Distribution. 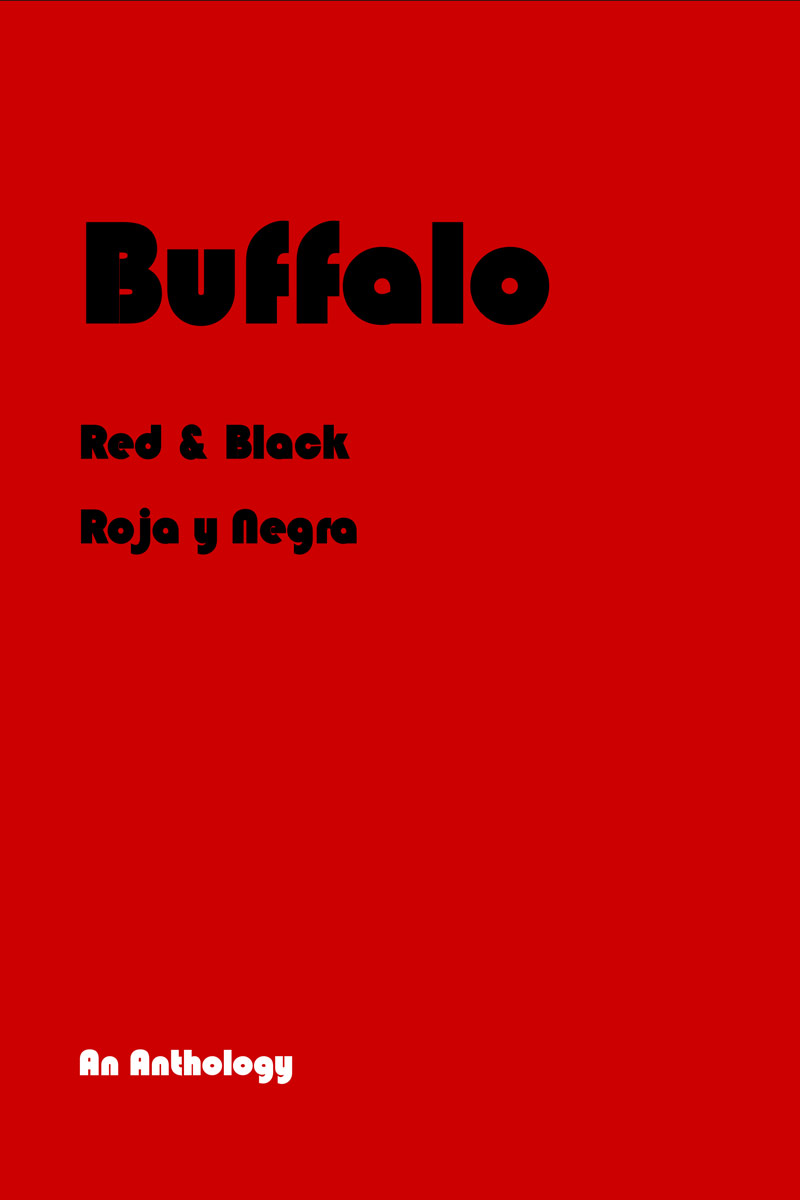 This zine collects writings produced by Buffalo Red & Black over the past year and presents them in one easy-to-read collection. It is a good overview of the activity of this anarchist organization out of Buffalo, New York. There are writings on anti-fascist activity, community clean-ups, and other activities undertaken by the group. There are also more theoretical pieces that attempt to draw lessons from their activity, the most interesting of which is a discussion of gentrification in the city and what it could mean to fight it.

Soaring Beyond the Walls 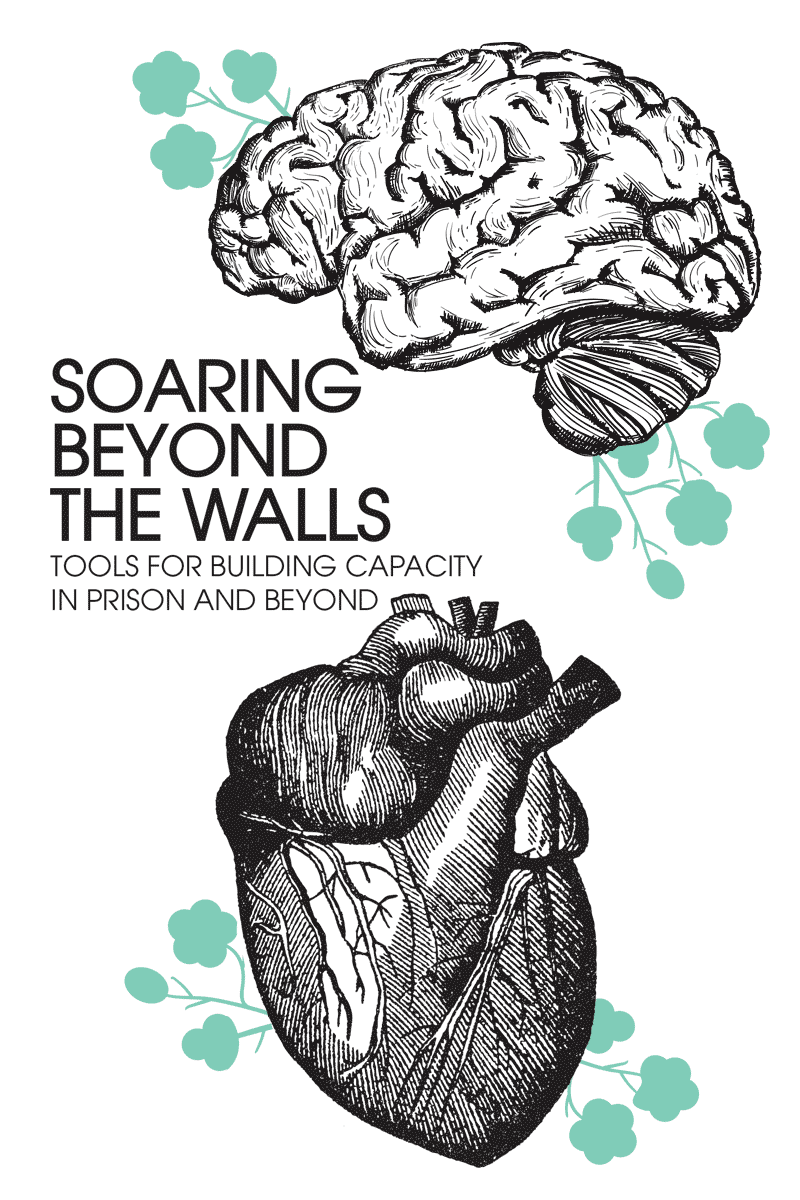 This zine presents a series of exercises and tools intended to help us gain a deeper sense of what our bodies are holding and what they are telling us. Most of the exercises are specifically oriented towards being able to cultivate a more healthy relationship between our minds and bodies. There is writing about stress, anxiety, grounding, etc as well as several exercises designed to address those feelings and experiences. 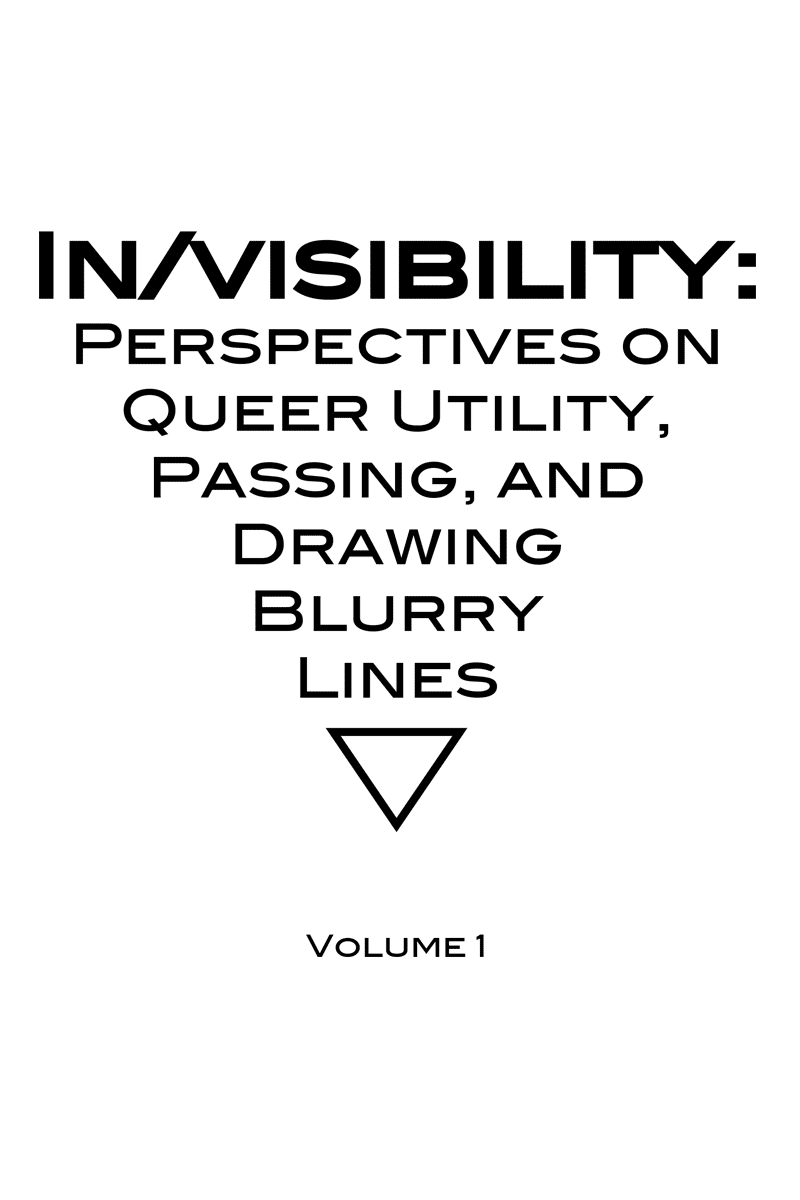 This submission-based zine from Back Pocket Press presents an interesting discussion of queer identity. The editor writes that the zine:

“….dissects the double-sided coin that is invisibility/visibility, erasure/violence, alienation/belonging in the context of a queer identity. With contributions from people who are coming into a queer identity, people who have been marked as queer their whole lives, people who are walking away from queer as it shape shifts, people who aren’t sure they can claim queer, people who have queer thrust on them whether they claim it or not, people who yearn to be seen by queers, and queers who yearn to disappear, this zine seeks to give shape to the discussions we all hold in hushed tones and catalyze constructive and thoughtful dialogue around what queer means, what queer does for us, and how we do queer together in alliance against cisheteropatriarchy.”

No Platform: An Interview with Mark Bray 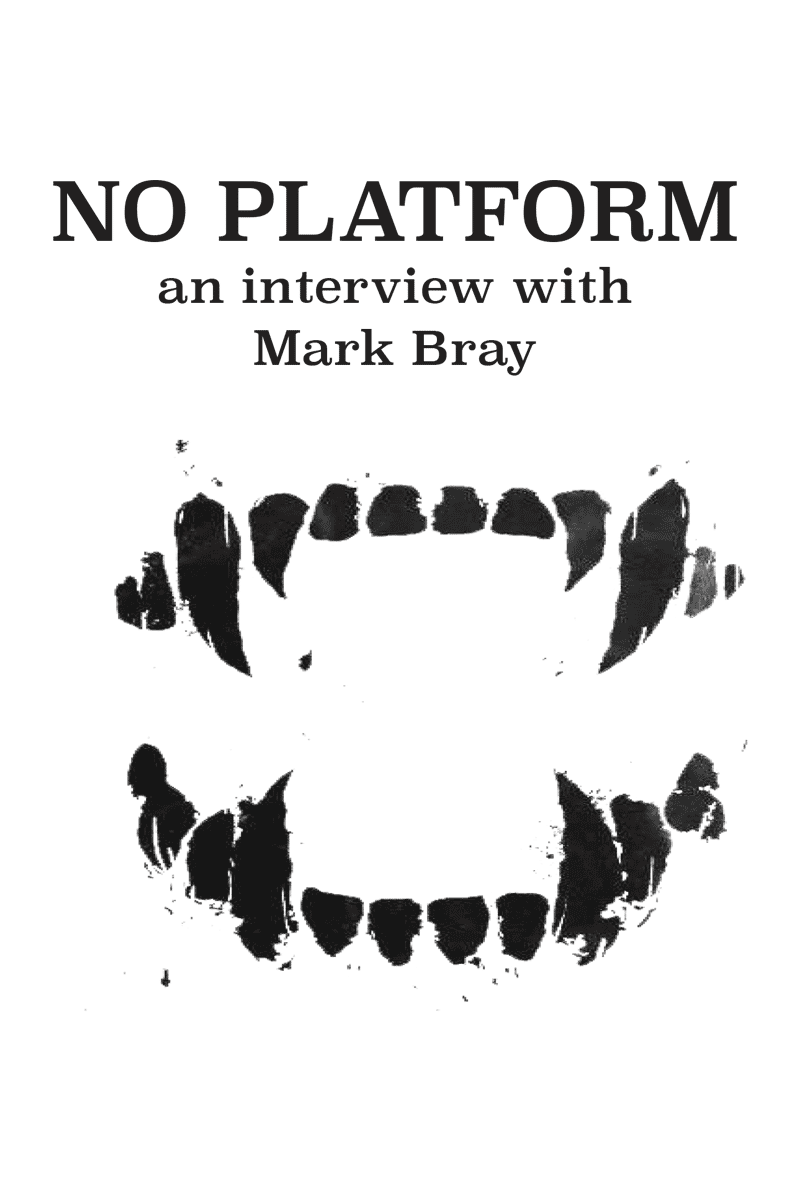 This is a zine format interview with author Mark Bray who has gained some notoriety over the past year as the author of Antifa: A Handbook. It serves as a good introduction to the anti-fascist idea of giving fascists “no platform”. It could be particularly useful as a tool for sharing with friends, family, co-workers, etc who struggle with the question of “free speech” as it relates to fascism. Alongside this, it provides a good historical overview of anti-fascism to ground the discussion. 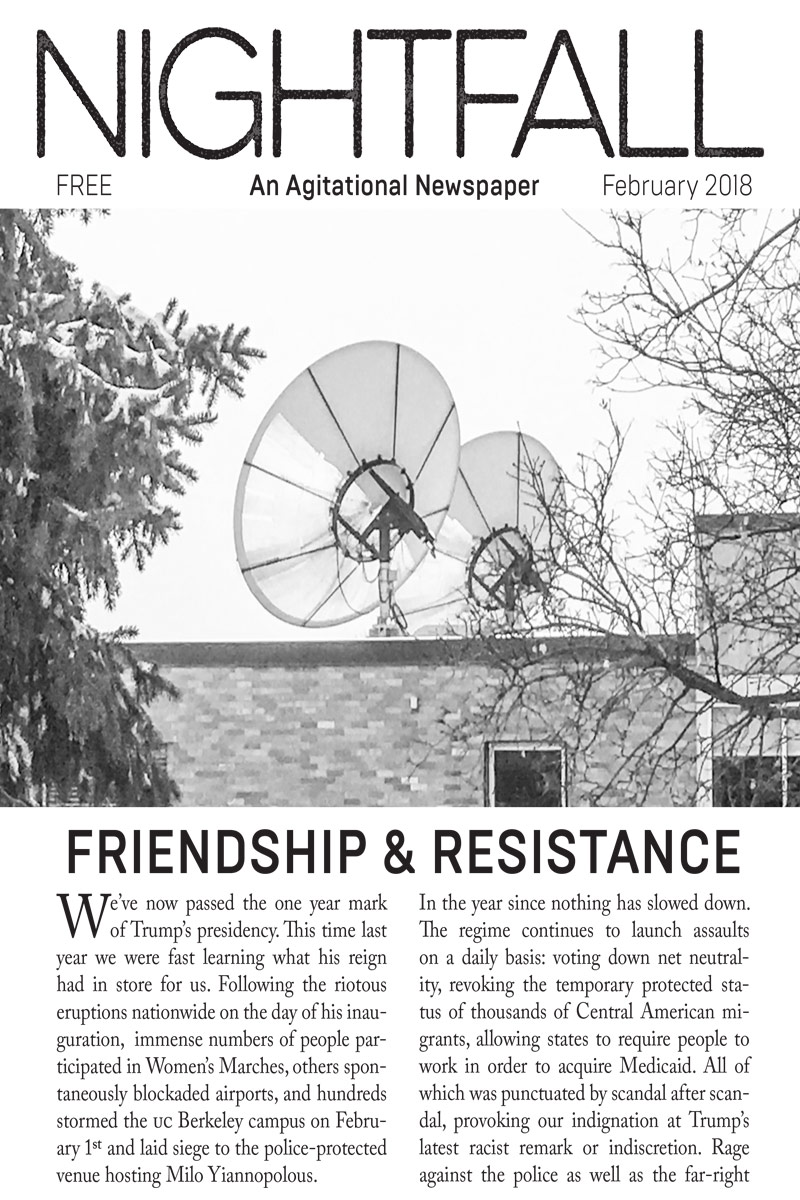 This is the latest edition of the Twin Cities based “agitational newspaper” Nightfall. Alongside the usual regional action reports and upcoming events, there are some interesting reflections on the state of the project and what motivates the people working on into continue. The challenges they face – not knowing if anyone is reading, difficulties with distribution, etc are common to all many radical publications and they may be useful to others working on or considering similar projects. Similarly, the piece “Why Write?” offers some useful perspectives on doing anarchist print media in the age of Facebook by way of some reflections on past anarchist media projects in the Twin Cities. 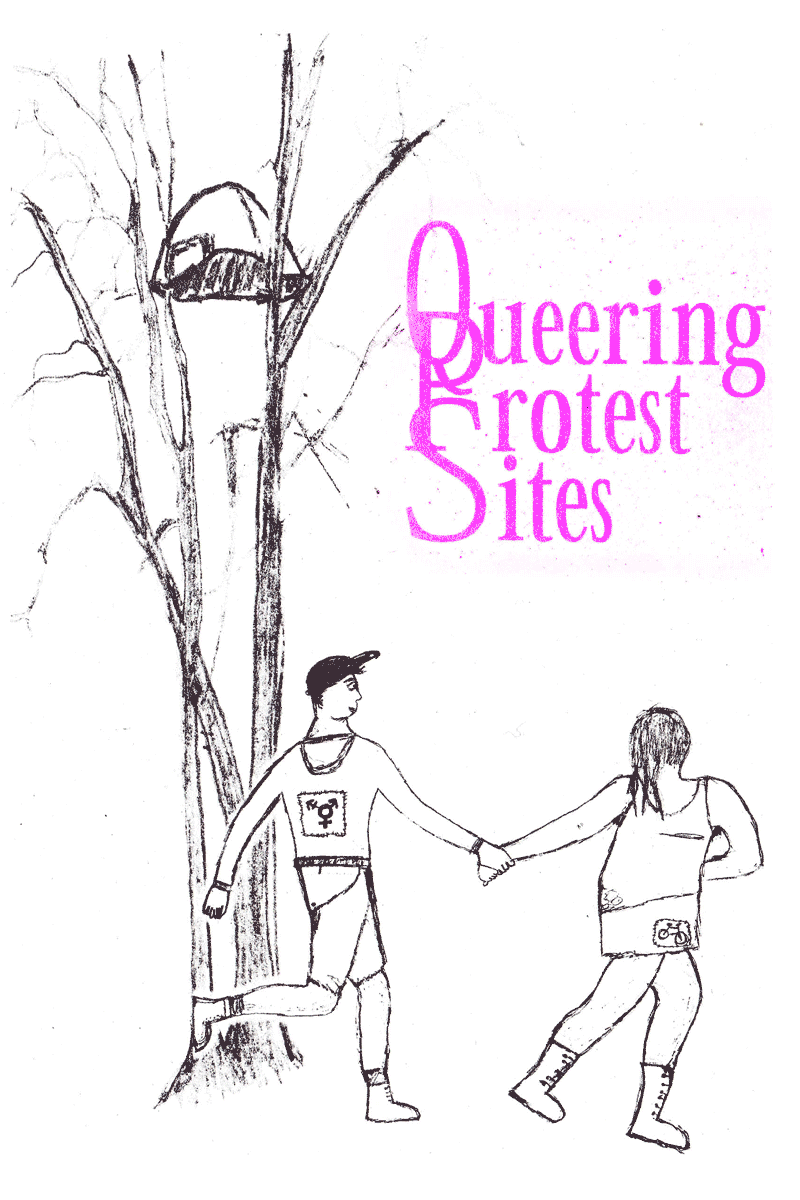 This zine is based on the experience of women and queers in at ecological protest sites in the United Kingdom. These stories recount the painful experiences of feeling alone and unsafe in spaces where men often either participate in or allow sexist and misogynist behavior. It was written to air frustrations and desires after years of living in communities where the authors felt their sexualities and genders were dismissed. While the context is a UK-based ecological protest culture, these kind of experiences are common place in the so-called United States as well. 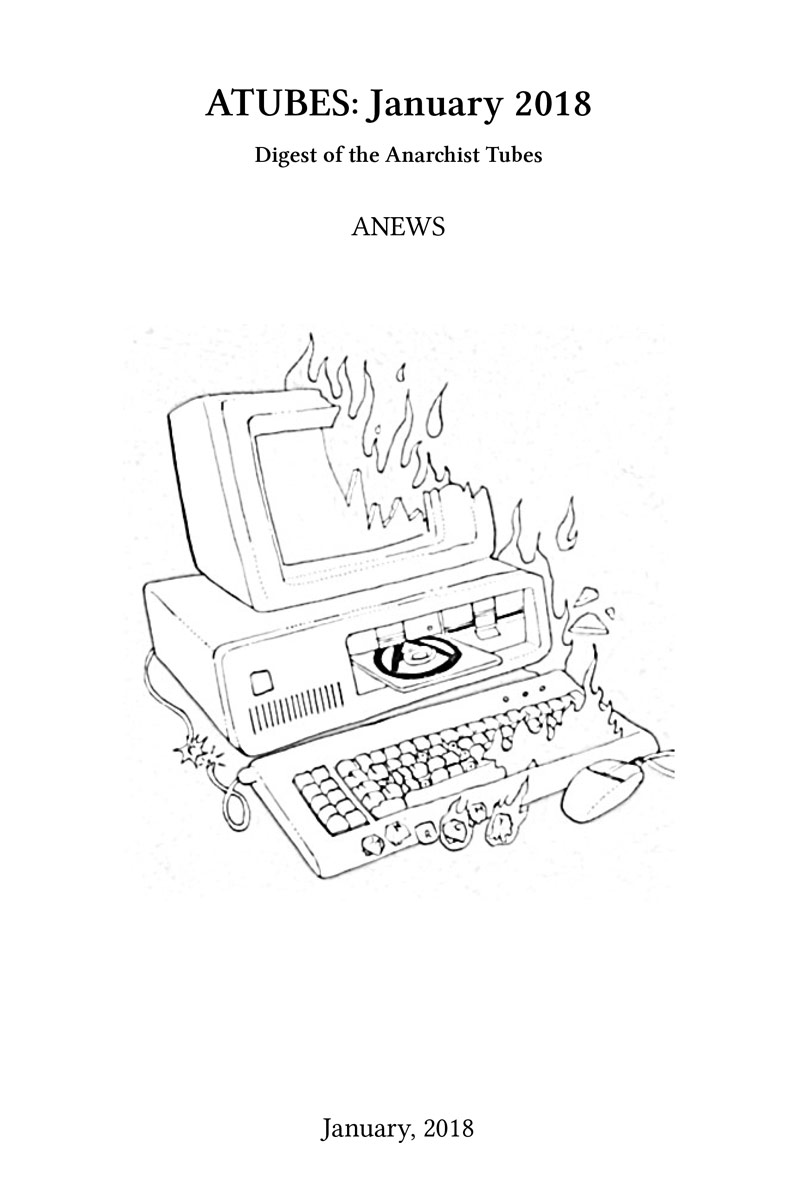 This roughly monthly publication from AnarchistNews.org collects four articles that were published on the website over the past month or so and presents them here in print format. The articles are: “A Review of Anarchism in Korea” by José Antonio Gutiérrez, “Iran: The Working Class Raises Its Head” from insurrection news worldwide dot com, “Notes Concerning the Black Clothing Worn by Some Anarchist Men and Muslim Women” by Duane Rousselle, and “Illegalist Praxis: Notes on a Decade of Crime” by Paul Z. Simons. There are no comments included this time.

This is a zine-formatted reprinting of a text that originally appeared on the Crimethinc website as “Notes on Anti-Fascist Self-Defense Training: 10 Lessons from the Russian Anti-Fascist Experience. It offers a series of tips drawn from the Russia about antifascist self-defense, as well as a brief overview of antifascist activity in Russia. It’s a good example of how dialog and tactics can be shared across international borders and still have relevancy in different contexts. 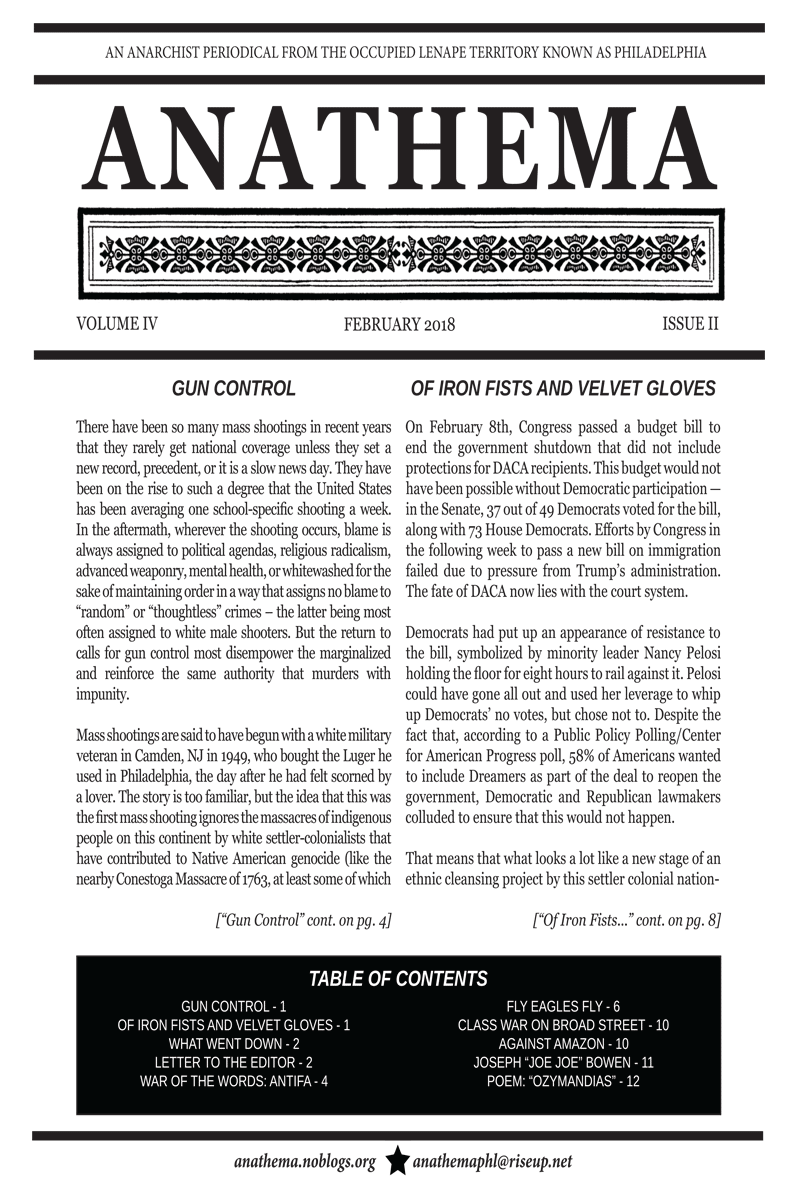 This is the latest issue of Anathema, a monthly anarchist publication out of Philadelphia. It features the usual list of recent actions along with articles on current events and topics such as gun control, immigration, and the recent riots in Philadelphia around the Super Bowl. As always, it’s a solid example of a locally focused anarchist print project – and the kind that should ideal exist in every city.

Break Away from Break Free 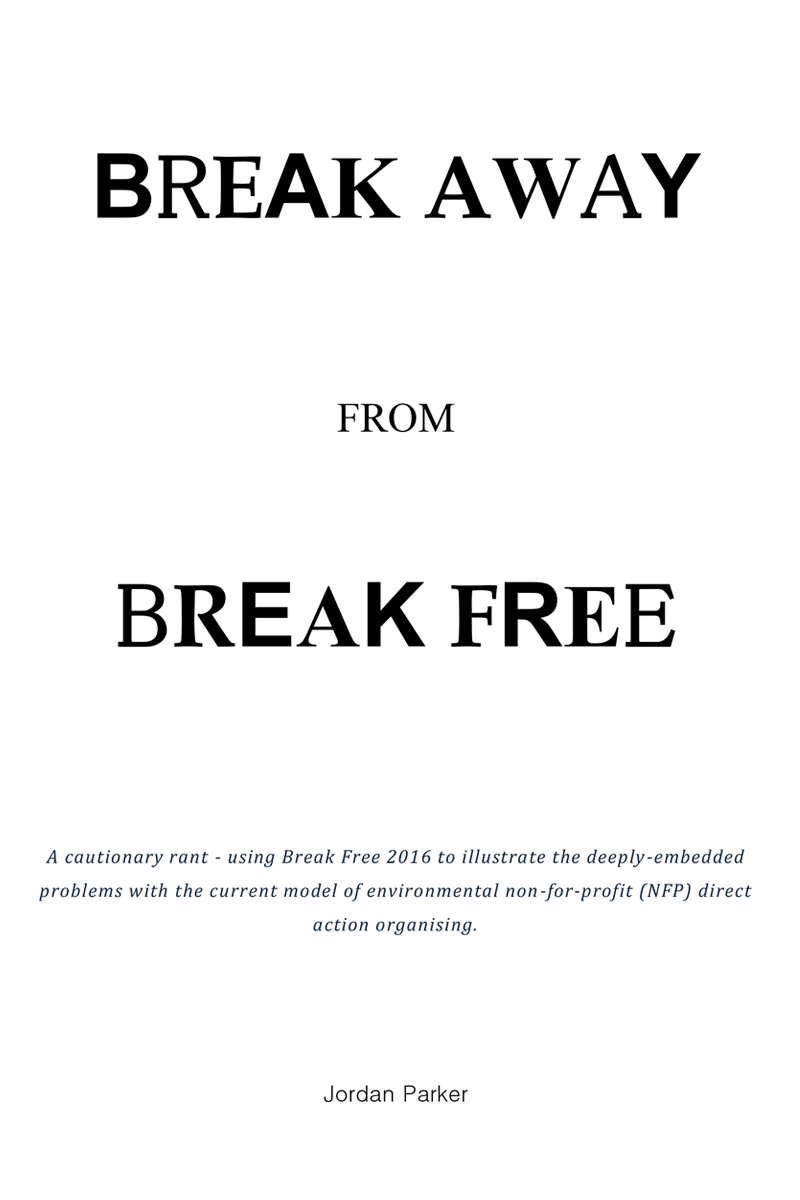 This zine criticizes the model of environmental organizing employed by groups like 350.org. We’ve all seen it: the heavily Internet-centric, non-violent direct action (NVDA) that seems to be the dominant response to environmental devastation. While the author writes from Australia, this model has circled much of the globe and has become a stifling practice that even seeps into more radical circles. The zine does an excellent job challenging the ideas of romanticizing arrest, dependency on large activist groups, media-orientation, and often complicity in colonial discourses.