The following anarchist zines and pamphlets were published over the last month or so. As always, we favor casting a wide net in these posts which means there are frequently things we don’t agree with included in these round-ups. Outside of actual face-to-face conversations, we favor the idea of different anarchist ideas coming into contact with each other via a robust print-based discussion. Perhaps it is a personal bias, but it seems preferable to the heavily Internet-based state of contemporary anarchist discourse.

If you have suggestions for stuff to include next month, get in touch. You can find previous monthly round-up posts here. 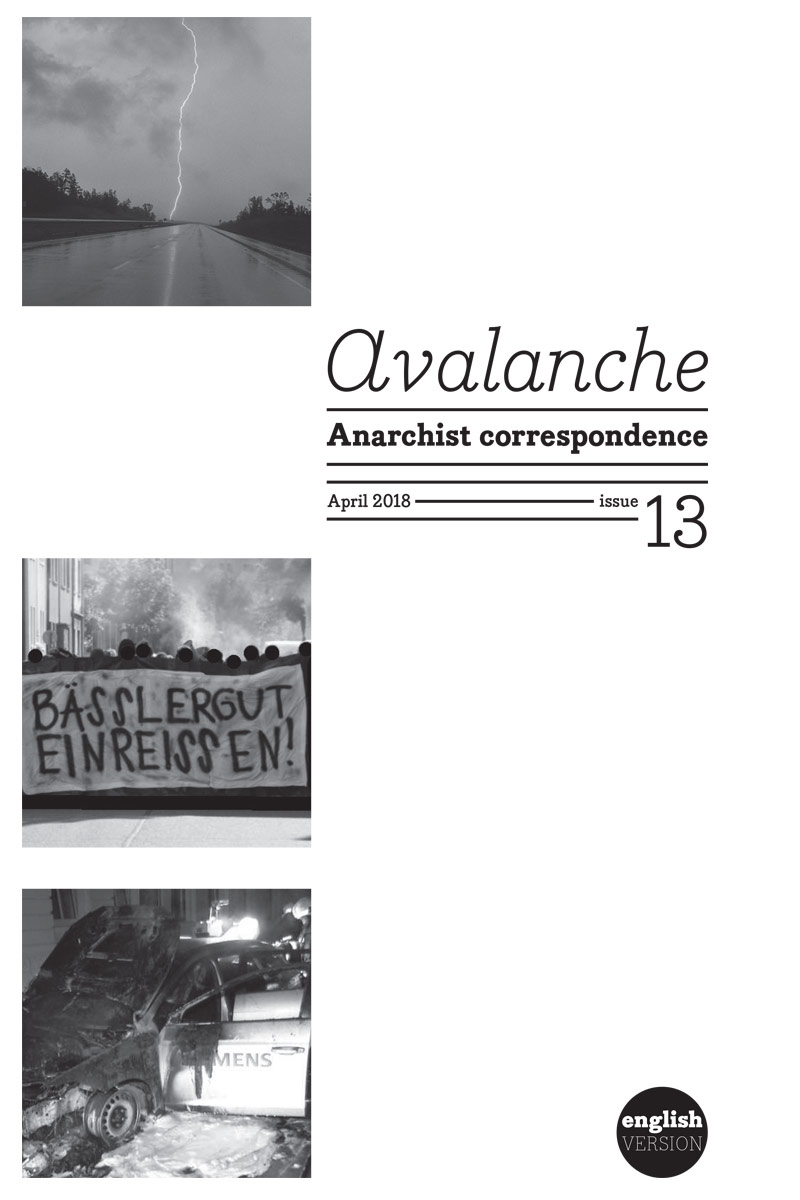 This is the final issue of Avalanche, a journal of international anarchist correspondence. The people working on the publication have decided to retire the effort citing a lack of contributions as well as a general lack of anarchist projects. The authors admit that their original goals may have been a bit too ambitious, but its worth recounting them because they are worth aspiring to with similar projects:

“The international correspondence contained in Avalanche was imagined to contribute to several dynamics; between anarchists across borders to have common reference points to facilitate a discussion that sharpens perspectives and deepens affinity, to transmit experiences in a less fragmented way (more coherent than the echoes of actions and repression) so that they become a shared history and a resource to take inspiration from, to motivate other anarchists to explore a project of direct action and self-organizing, to invite those who don’t have an inclination to communicate about their projects and experiences to reflect and share.”

This final issue has a long essay on an insurrectionary struggle against prisons in Basslergut, Switzerland, a critique of so-called “smart cities” from Germany, and an interview on the situation in Tunisia. 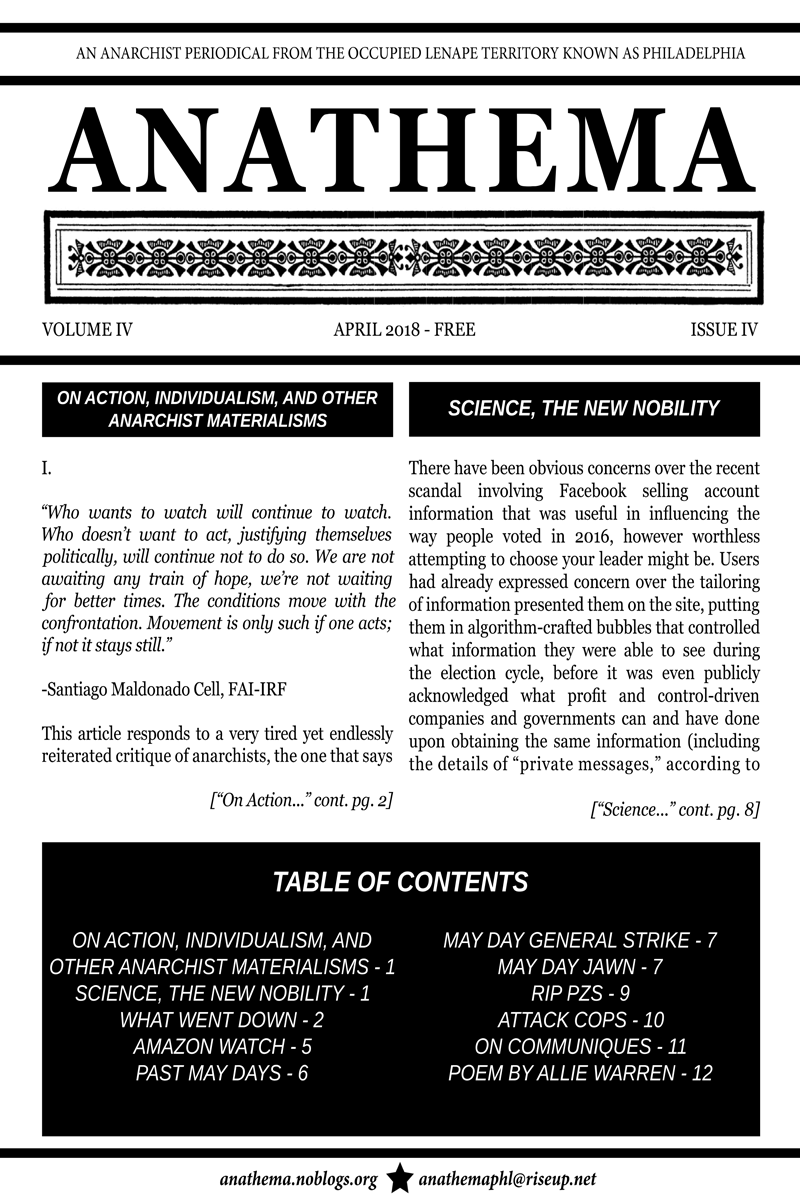 This is the latest issue of Anathema, “an anarchist periodical from the occupied Lenape territory known as Philadelphia.” This issue features the usual round-up of recent actions in Philadelphia, a recounting of what happened on past May Days in Philadelphia, and a call for actions this year. Along with this there is a longer article titled “On Action, Individualism, and other Anarchist Materialisms” that responds to the criticism that anarchists just want to take action for the sake of action. It offers some interesting lines of thought, especially regarding the difference between insurrectionary anarchism and communization theory. The other front page article is titled “Science, the New Mobility” which is a critique of the technological world and a reminder that “civilization is always more work.”

June 11: International Day of Solidarity with All Long-Term Anarchist Prisoners 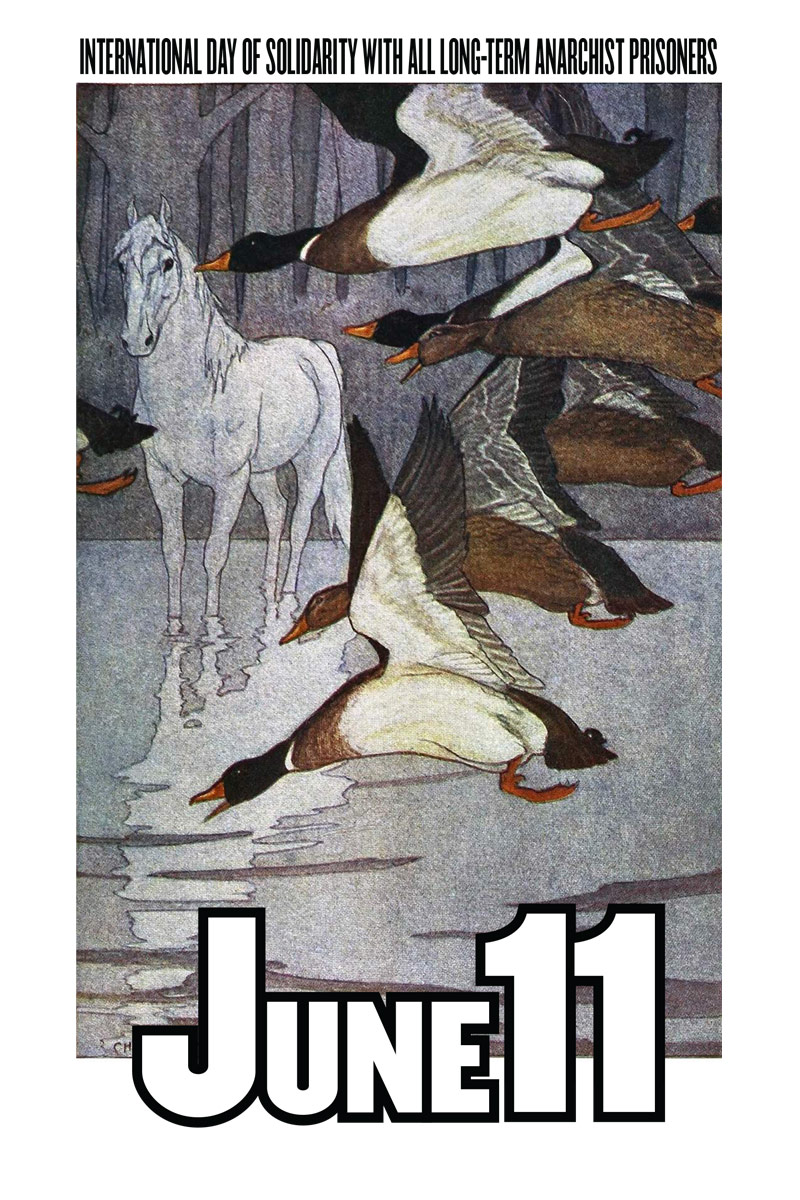 This is a zine version of the annual June 11 call for actions and solidarity with long-term anarchist prisoners held each year since 2004 . The call is an annual reflection on the day in which folks working on the project think through the previous year’s efforts and offer some thoughts and renew the call for solidarity. An excerpt from the call raises some important questions:

This year we invite you to explore and ponder with us how maintaining support for long-term prisoners depends directly on sustaining the movements and struggles we all remain part of. How can we expect to continue through decades of support as movements, groups, and people come and go, burn out, and get caught in the exhausting ebbs and flows of struggle? Going deeper, what can we learn from long-term prisoners and their legacies of solidarity? How can we sustain and improve the health of our movements, and in turn strengthen that support? 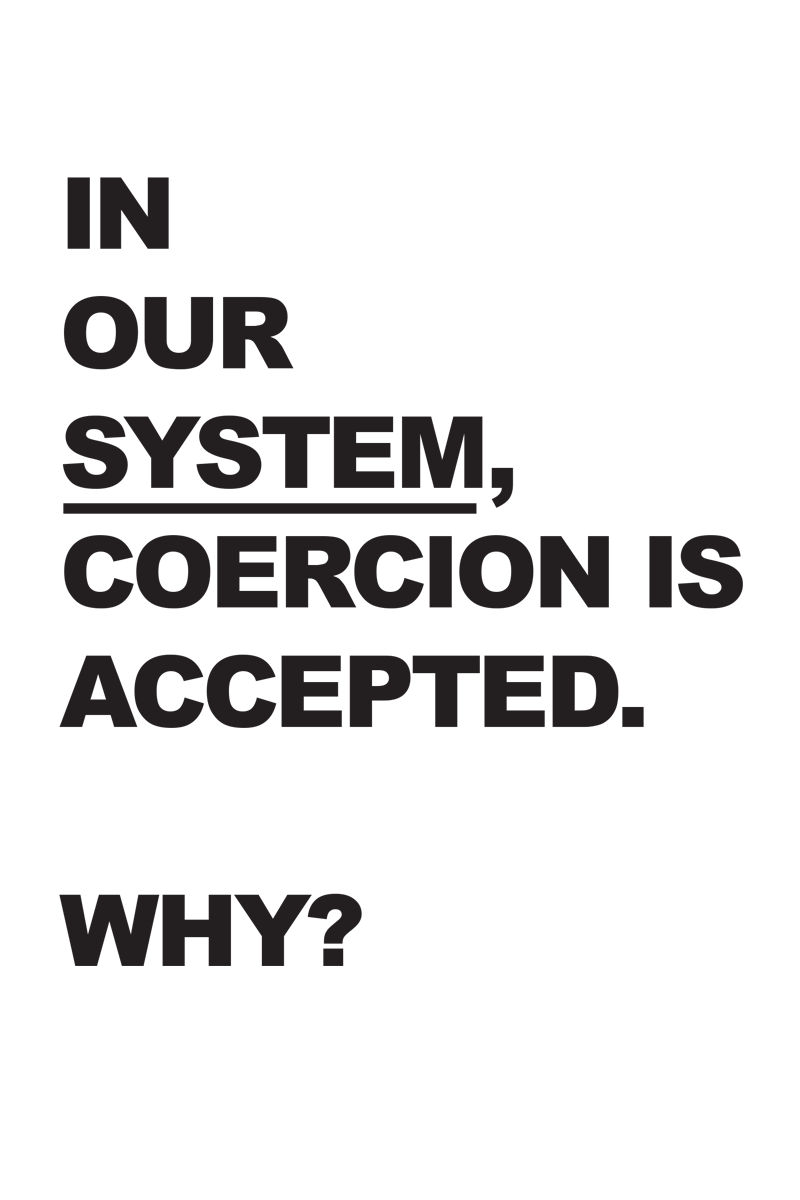 This heavily foot-noted zine (35 in 3 pages) presents an argument in favor of what the author calls “consent-based politics”. In the presence of a “power” that does not listen, this zine is a call for a return to the “…interpersonal base from which we might, by way of consent and our own volition, build structures to elevate and express our rich diversity – not oppressing and silencing in service of a fixed, ‘winner takes all’ worldview, but one that engages an expansive fluidity, embedding us all in infinite play.” It draws heavily on the works of Paulo Freire and David Graeber. The essay calls for a broad decentralization of power and for people to have more say over their lives. 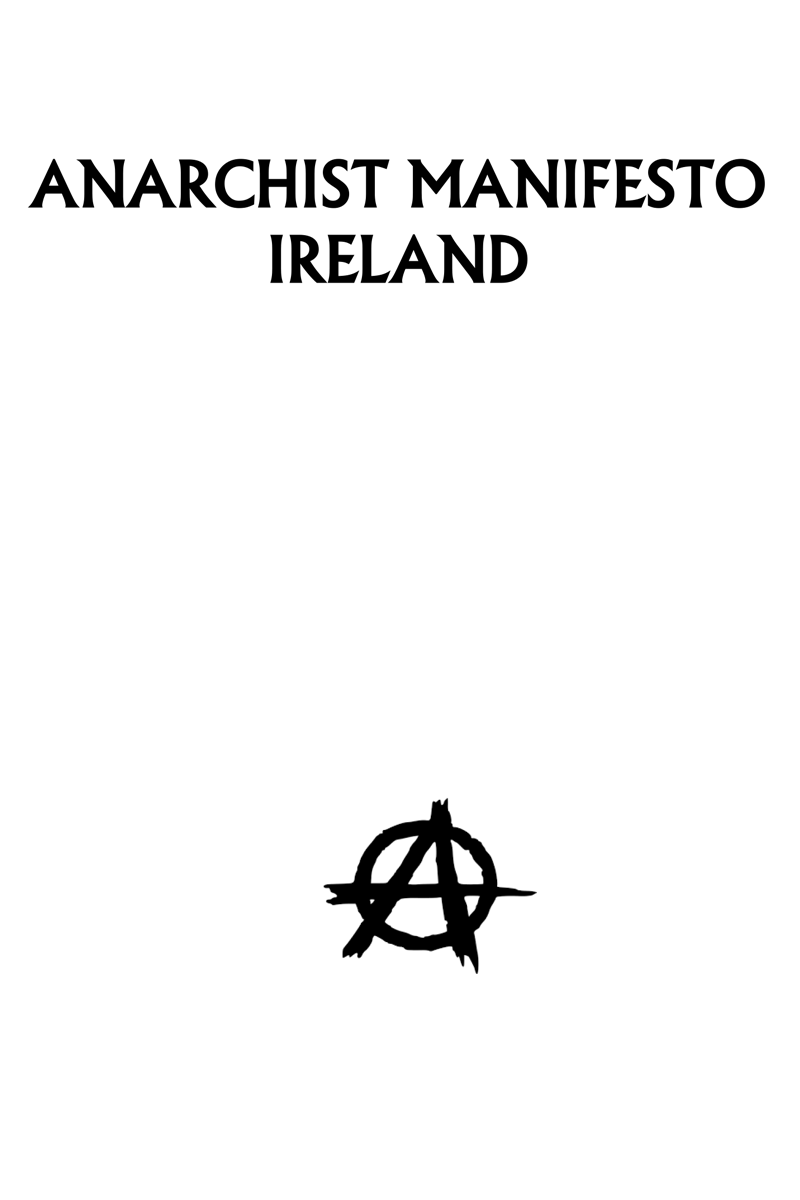 This is a manifesto of a group out of Ireland that meets regularly to talk and engage in their politics of “libertarian socialism”. The zine was produced as a response to their frustrations over armchair theorists who are content to just “sit in their gardens and talk” rather than actually doing something. In response, this group offers the vision of a commune as a local expression of their politics with federations as a higher level expression. Alongside this, they present what can best be describe as 12 “policy recommendations” advocating for things like leaving the European Union, regulated multinationals, increasing taxes, and public ownership of major companies. It’s similar to the kind of broad utopian blueprints for society that were often en vogue during the classical anarchist movement (see Rudolf Rocker’s Anarcho-Syndicalism: Theory and Practice) as an example. Of course those tended to be connected to broad class-based movements, it’s hard to know what kind of roots this effort has. 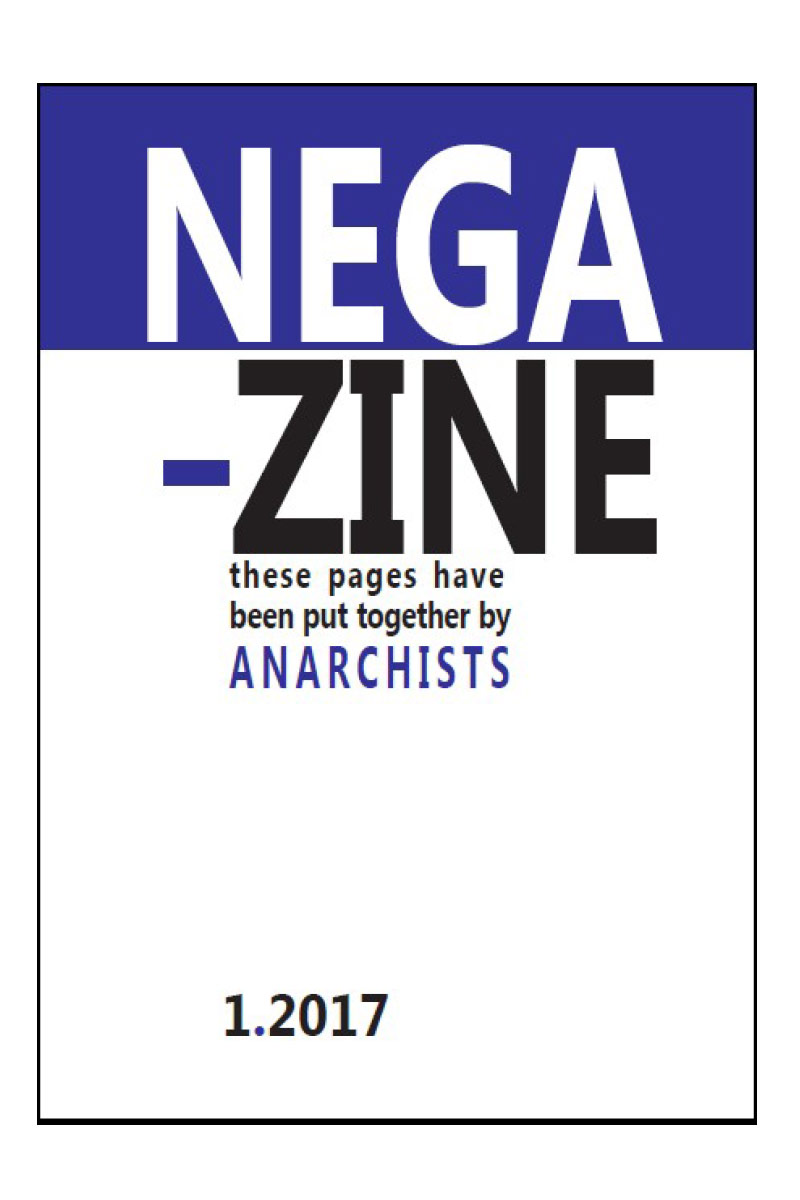 This is the first issue of “Nega-Zine” a newer journal by anarchists published by Elephant Editions. This issue features a lengthy discussion and examination of contemporary technology, specifically focusing on how technological systems tend to reduce people’s critical and cognitive capacities. There are several contributions that deal with technology and its role in the world. A line from the introduction outlines why this is an important focus:

“It should be clear that these questions are not being taken up for the love of discussion but to give one more weapon to individuals who want to attack. It is a question of acutening one’s vision in order to identify an enemy which often passes off as invisible, in fact which has in its invisibility its main point of strength.”

The publication advocates for affinity and informal organization, with the goal of attempting to understand “where and in what form does the enemy manifest itself today.” 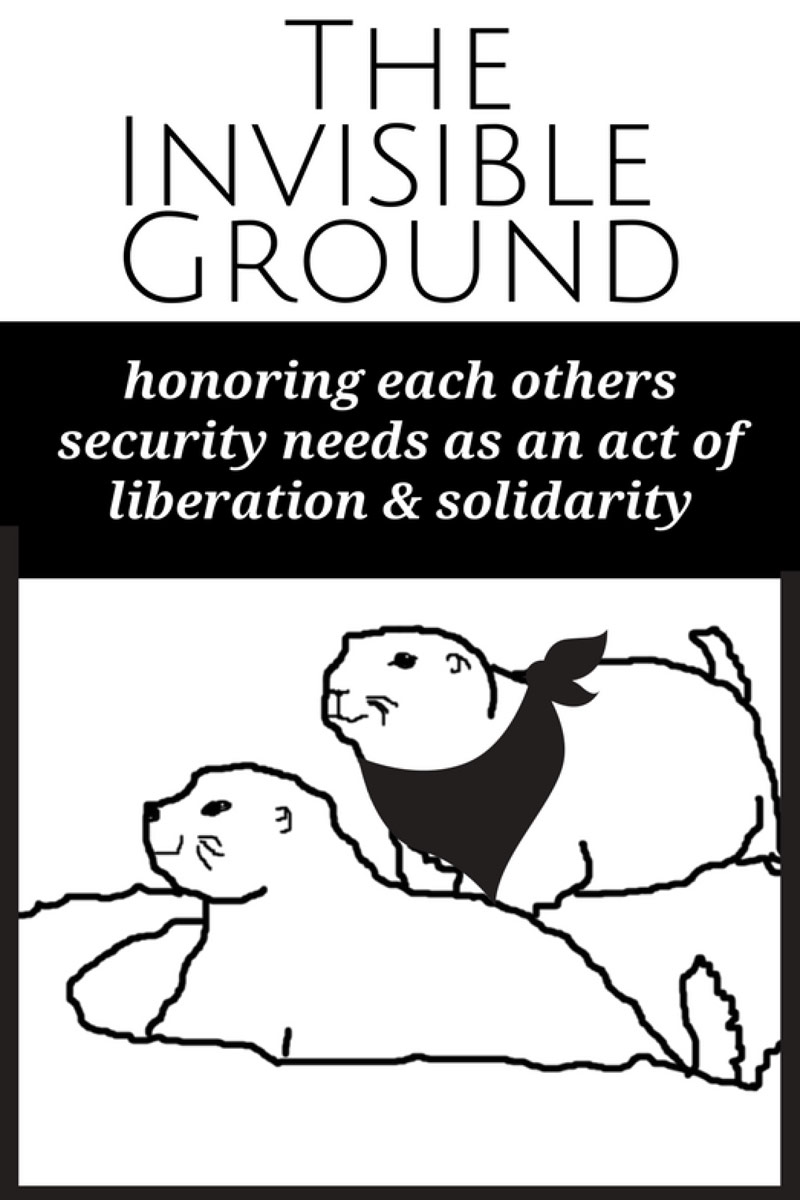 Sub-titled “honoring each others security needs as an act of solidarity and liberation”, this short zine is a discussion of security culture that argues that respect for the security needs of our comrades is an essential aspect of any movement for liberation. It identifies what the authors call “the invisible ground” to name a problem that is present in many different spaces, namely that there some kind of clear line between “under-” and “above-” ground activities. Instead the authors argue that there is a constantly shifting terrain in which the state is constantly shifting the boundaries, largely in response to what is effective at any given moment. The state will always act to protect its interests and will shift the legality of various actions in an effort to repress movements. Consequently, the zine argues that it is always important to organize with good security culture to protect everyone involved. 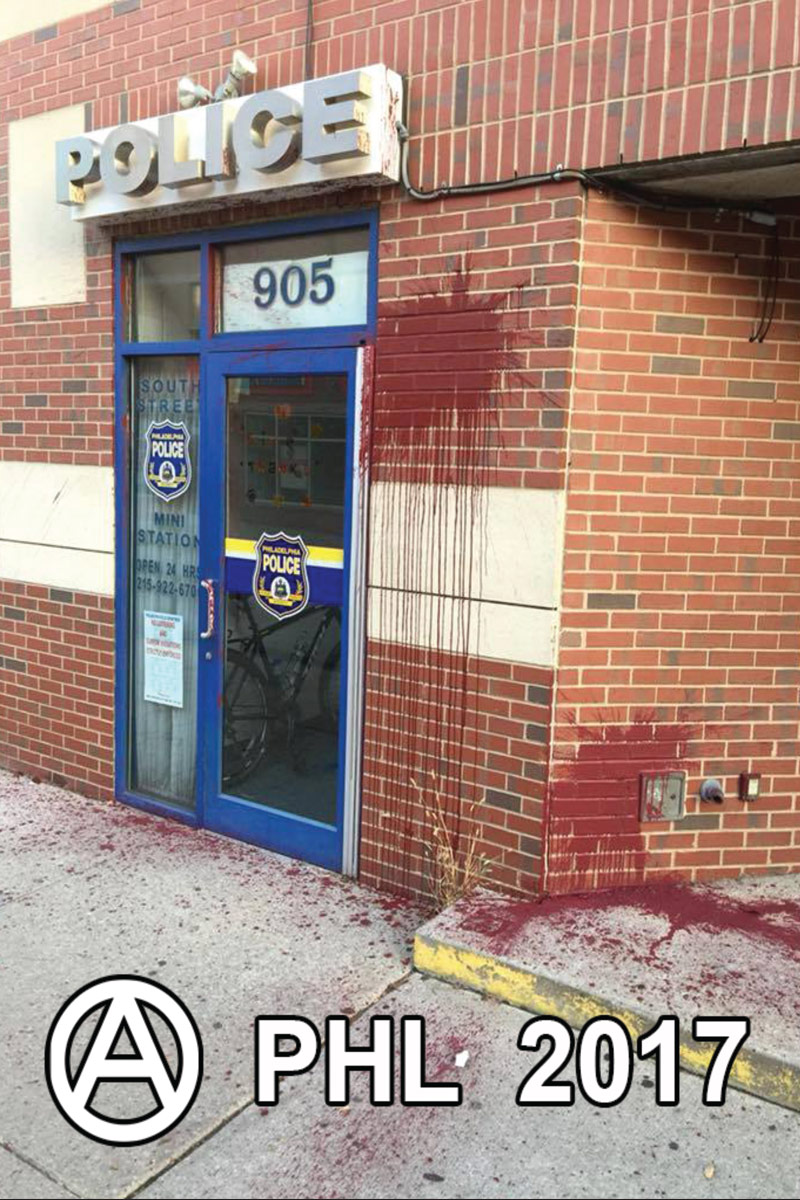 This is a photo-heavy documentation of actions that happened in Philadelphia during 2017. The intro explains the goals of the project:

It’s been a year since Donald Trump took office, and Philly has been stepping it up. Let’s take a minute to celebrate all the determination, courage, and endurance of all the rebels who’ve poured sand in the gears of the system that makes his presidency possible. This is a timeline of some of the anarchic activity that’s happened over the last year. Let’s look back to learn from our mistakes, and continue to build our strength against everything that brings oppression into the world.

Worth checking out for inspiration!