The following zines were published in the past month. We hope that this post is useful and that the increased visibility of these zines contributes to the spread of anarchist ideas. We have heard of folks printing off these zines and sending them to prisoners, using the list as a basis for reading groups, or using them to stock zine racks at coffee shops and infoshops.

As always, please let us know about titles to include next month. Zine round-ups from the previous months are full of interesting texts too!

Also, it’s worth thanking the folks who take the time to write these texts and format them for offline reading. In a world dominated by screens, it’s much appreciated!

Compiled by The Contemporaries Project, this zine collects four essays written in the aftermath of protests following the police killing of Scout Schultz last September. The four essays are: “Scout Schultz Was a Burning Flare” published by Mask Magazine, “Remembering Means Fighting” by Crimethinc, “Resistance for Scout” published on ItsGoingDown.org, and “Would it Have Been Different” from Yahoo News. Alongside the essays the editors have included a timeline of events. 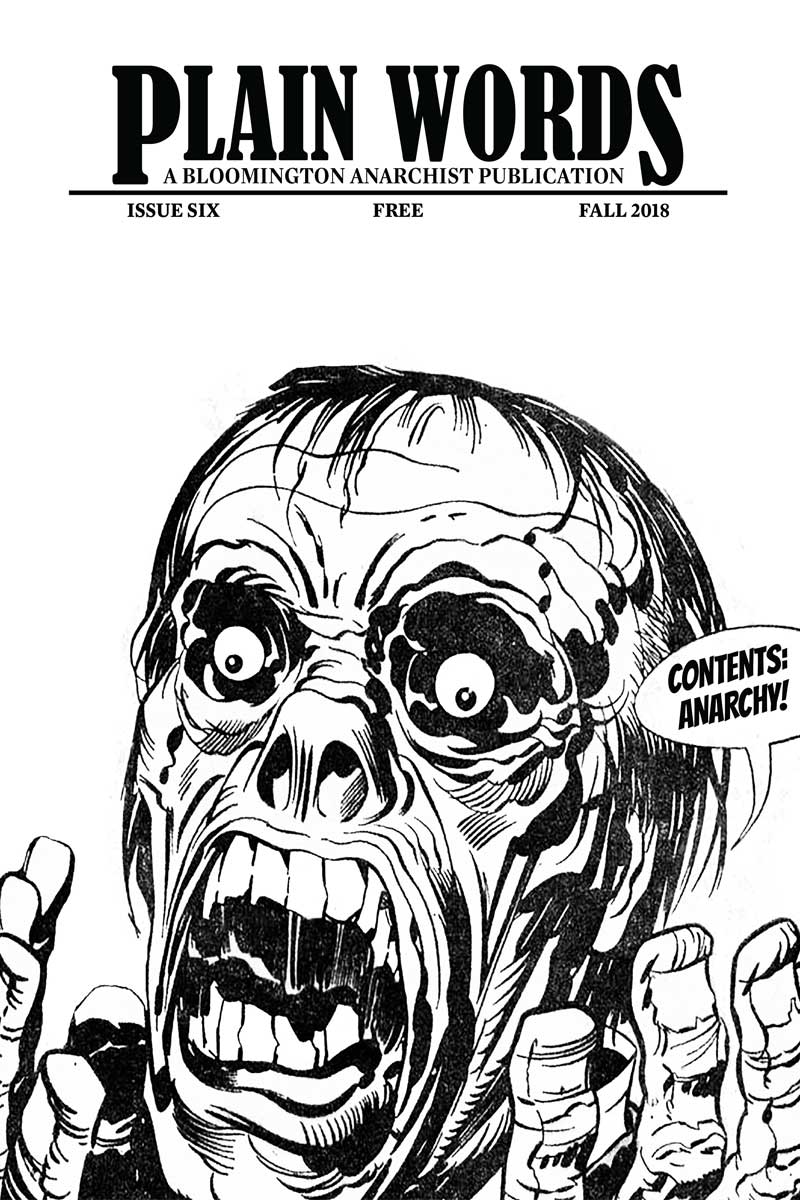 This is the fall 2018 issue of the Bloomington, Indiana anarchist publication Plain Words. This issue has relatively little content specific to Bloomington but has many articles that would potentially be of interest to folks elsewhere. There is a discussion of court support, a discussion of populism and activism, a piece on Christian anarchism from a Catholic Worker, two pieces on anti-art and graffiti, a piece on accountability, and a profile of anarchist Renzo Novatore.

Veganism from a Nihilist and Anti-Civilization Perspective 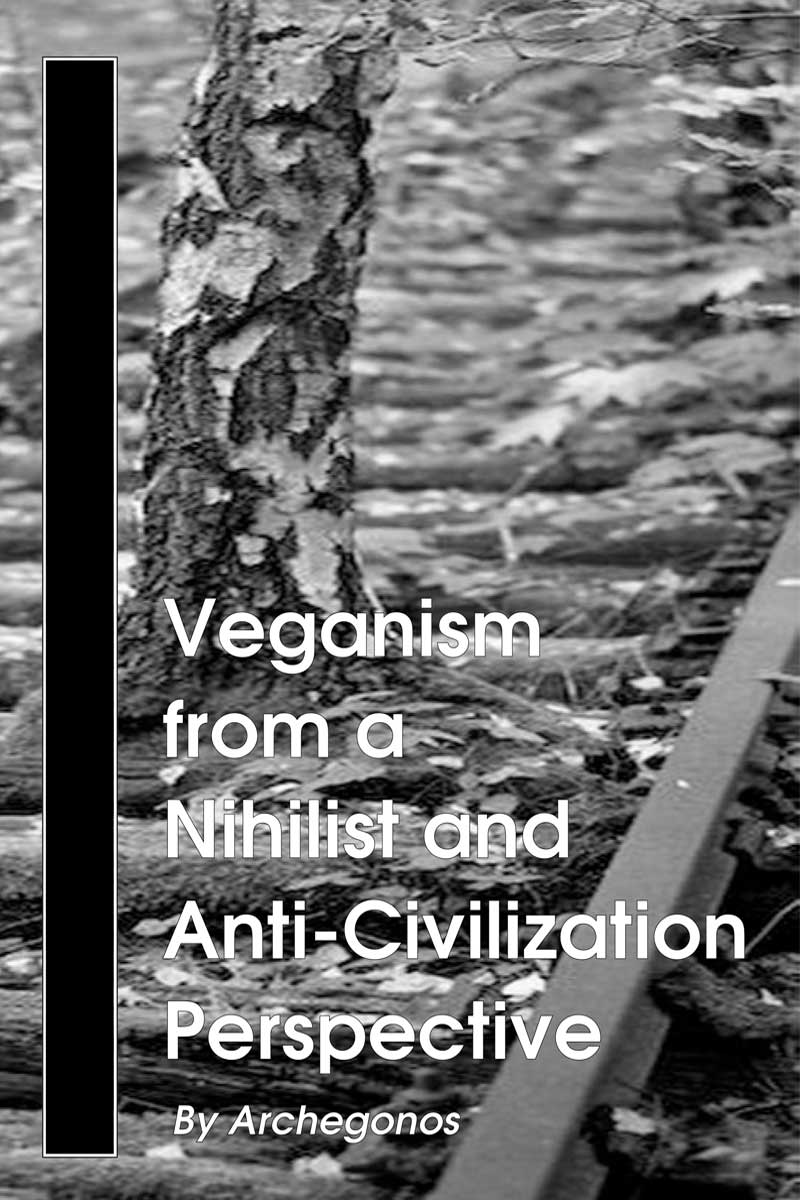 This short zine from Warzone Distro presents a different view of veganism than what is often found in mainstream vegan discourse. It essentially argues that being vegan is a personal act that is necessarily separated from notions of “good” and “bad” and against the limits of ineffective boycott tactics. While the writing is at times a bit cumbersome, it’s nice to see an essay that tries to move beyond a simplistic discussion of veganism rooted in market ideology. 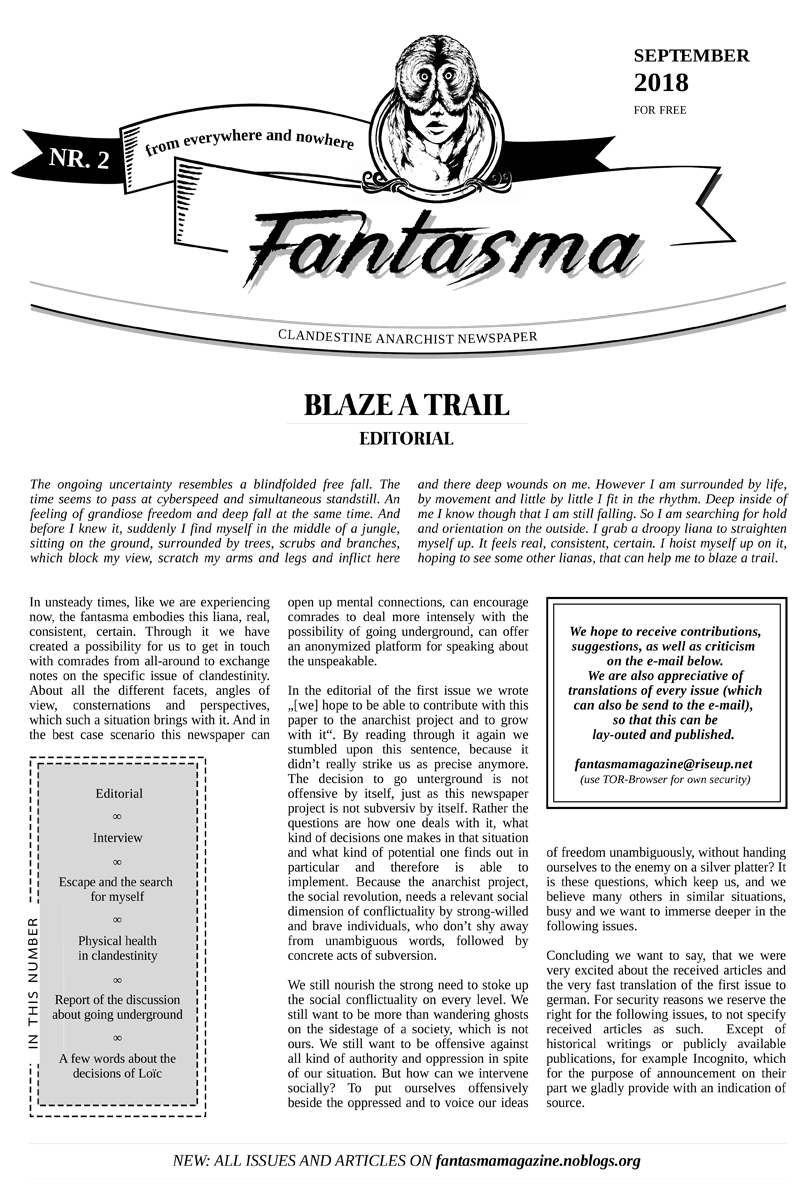 This is the second issue of Fantasma, a publication that calls itself a “clandestine anarchist newspaper”. This issue features several articles discussing the ramifications of going underground as a response to repression. There is an interview with a person living underground, an article on dealing with physical health when underground, and a lengthy report on a conversation between comrades about what it means to go underground. The overarching topic of being clandestine is unique and challenging and it is a refreshingly deep discussion for the anarchist space.

A Whores’ Dialogue: On the History & Racism of Anti-Trafficking 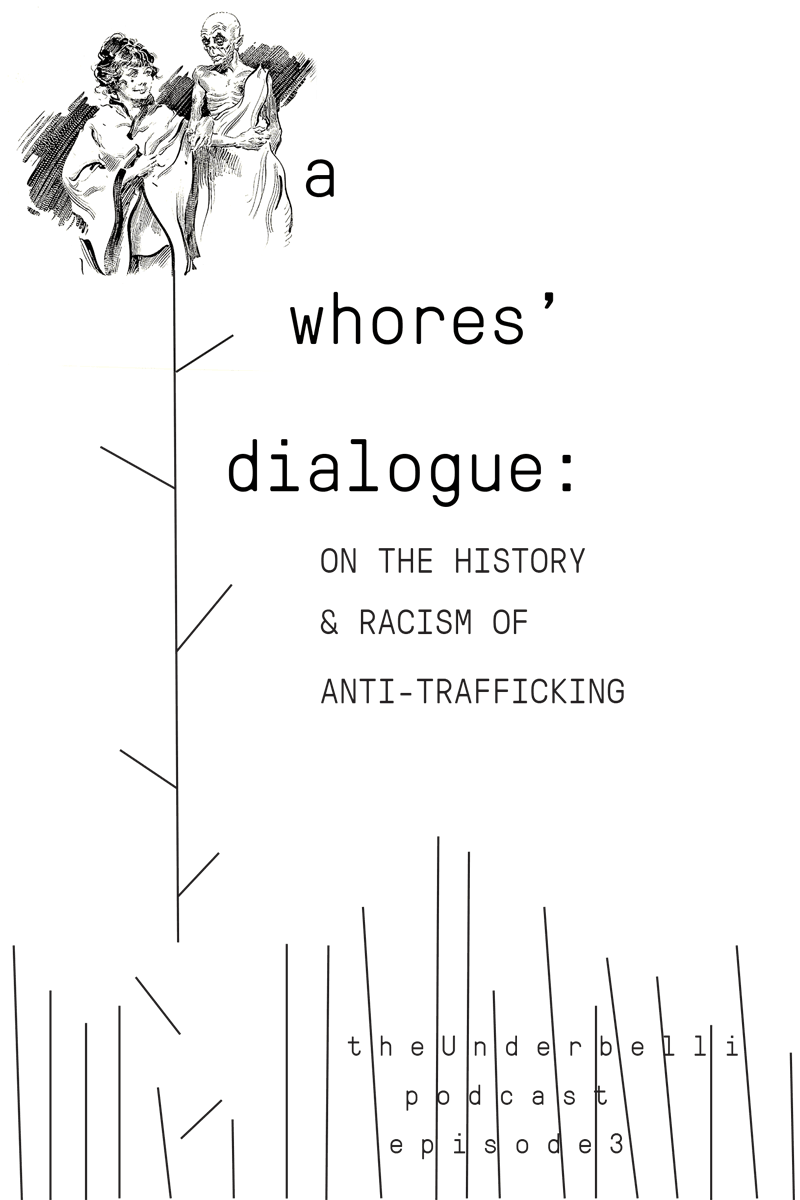 This zine is a transcript of a podcast by the Belli Research Institute that looks at the origins of anti-trafficking efforts. It comes in the aftermath of the anti-trafficking FOSTA and SESTA bills and the ensuing discussions about how these bills make working conditions more precarious and dangerous for sex workers. From the intro:

We are not going to discuss FOSTA and SESTA directly here since a lot of good stuff already ex- ists critically looking at these bills’ effects. A typical response that is formulated is that congress’ anti-trafficking efforts have unintended consequences. Our approach will be more to map what has motivated anti-trafficking work from its origins in the late eighteen hundreds to the present. To do this we need to take a step back and ask some simple questions. What is sex trafficking? How is it defined? Why is anti-trafficking generally in opposition to sex work? 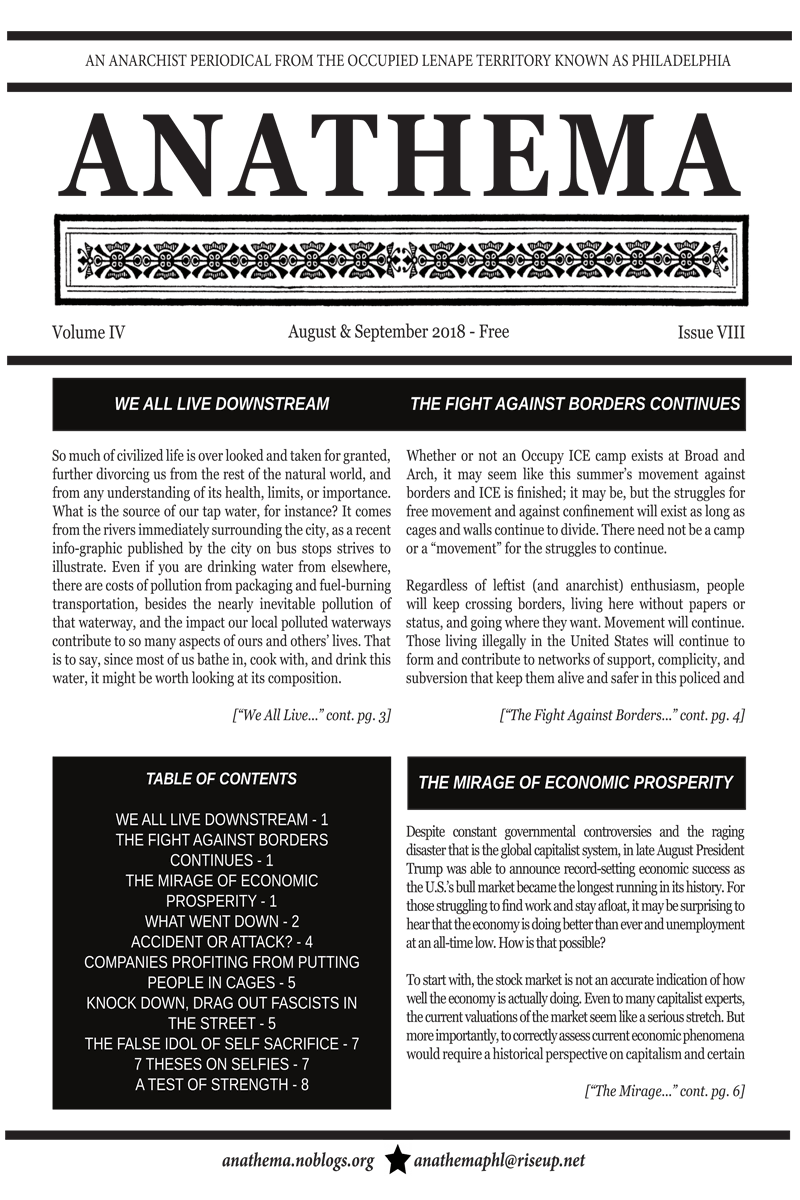 This issue of Anathema – a Philadelphia anarchist publication – is another good example of a solid locally-focused counter-information project. It provides an a window into what seems to be a vibrant anarchist space in Philadelphia, if one can judge based on the “What Went Down” timeline of actions featured in Anathema. There are a number of essays on local topics, including a discussion of local waterways from an anti-civilization perspective and a discussion of where anti-borders activity might go from this summer’s anti-ICE encampments. There is also a nice piece titled “7 Theses on the Selfie” in honor of National Selfie Day (who knew there was such a thing…).

Gaetano Bresci: Tyrannicide and Defender of the People 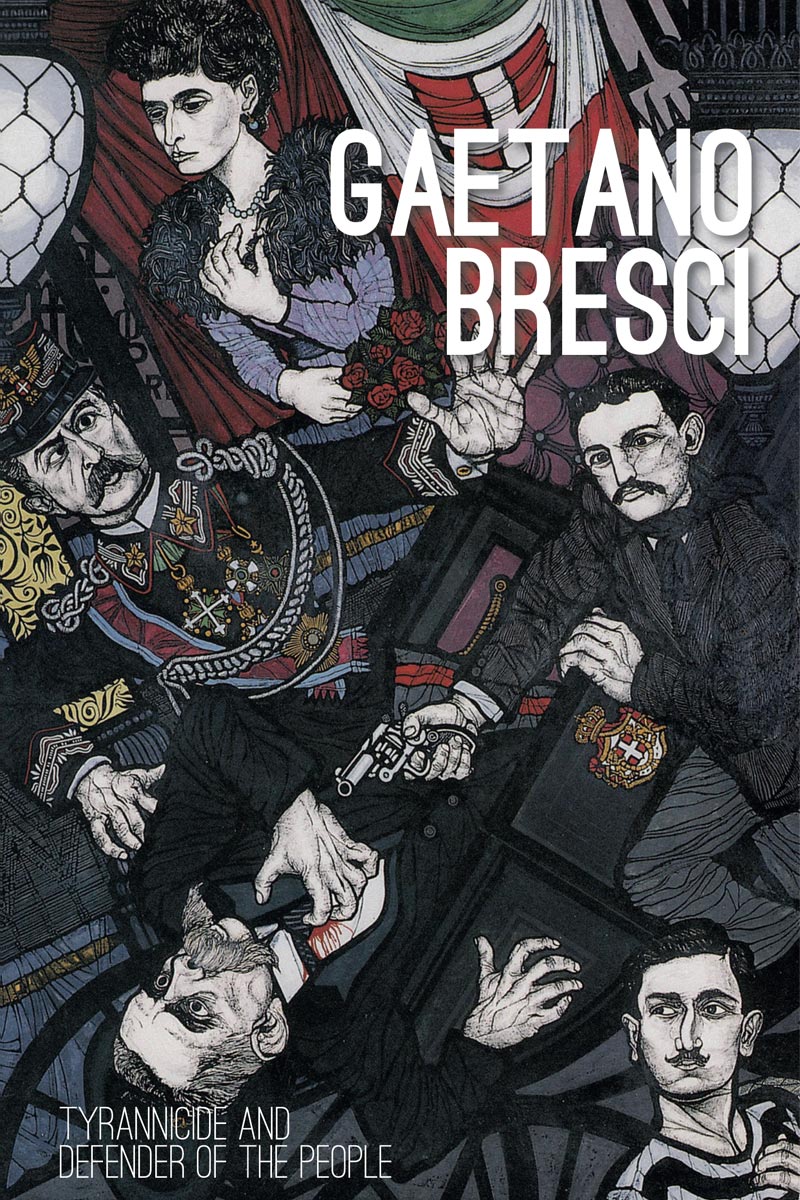 This is a zine-formatted version of a text written earlier this year by Crimethinc about the anarchist Gaetano Bresci. From the intro:

On July 29, in the year 1900, the anarchist Gaetano Bresci assassinated King Umberto of Italy. But there is a lot more to his story than this single deed. Here, we remember an Italian worker and immigrant who risked his life to save Errico Malatesta from an assassination attempt, then gave his life to impose consequences on the king for the deaths of hundreds of poor working people. We’ve also included translations of Malatesta’s and Tolstoy’s reflections on Bresci’s attack.

An Invitation to Desertion 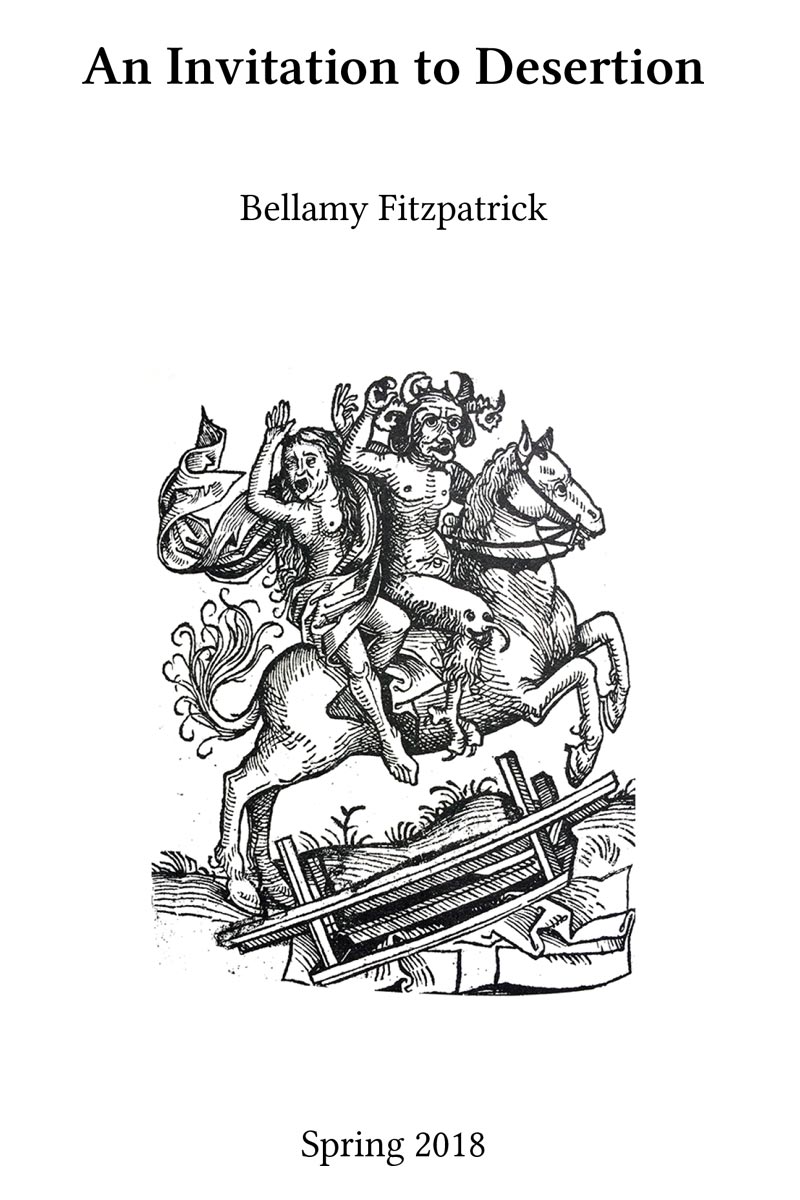 This essay by Bellamy Fitzpatrick is the opening essay to the anarchist journal Backwoods, which is a new anti-civilization anarchist publication that came out earlier this year. Backwoods is an offline project, but because this essay was posted on The Anarchist Library in September, it seems worth including in this month’s zine round-up. Check it out and order a copy of Backwoods when you are done—it is beautifully printed and offers a substantive anti-civilization discussion.

This is the first issue of Fire Ant, a new anarchist zine supporting anarchist prisoners. It comes from some folks in Maine who have been corresponding with and supporting prisoners since the 1990s. The goals of the project are elaborated in the introduction: