The following zines were published in the broad anarchist space in November of 2018. We’re a bit late on collecting the contents of this post, but as always we hope its useful in some way. As always, let us know about new titles to include next month. 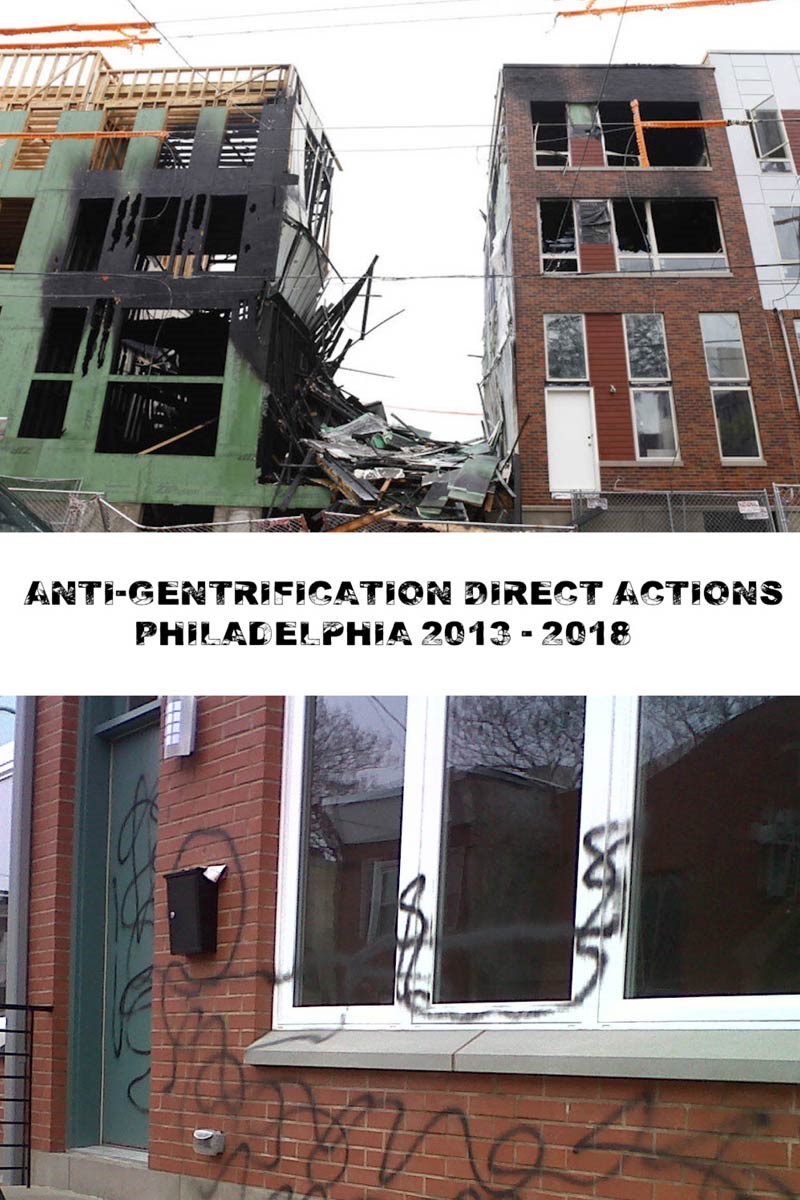 This zine catalogs reported anti-gentrification actions undertaken in Philadelphia over the past five years. From the intro:

“This zine is the latest in a decentralized series of posters and zines recording resistance to gentrification. We are not writing this to create a false sense of strength, but so that we remember what is possible and what has happened. A chronology of past actions does not mean resistance to gentrification is thriving or will continue. However, memory and imagination are two forces rapidly being extinguished and we want to counter that. At the same time, memory and imagination alone cannot oppose gentrification, but, must combine with the choice to fight, leading to action. As always people need to choose to fight.”

The zine includes photos and a nice introduction outlining some of the dynamics of gentrification in Philadelphia. 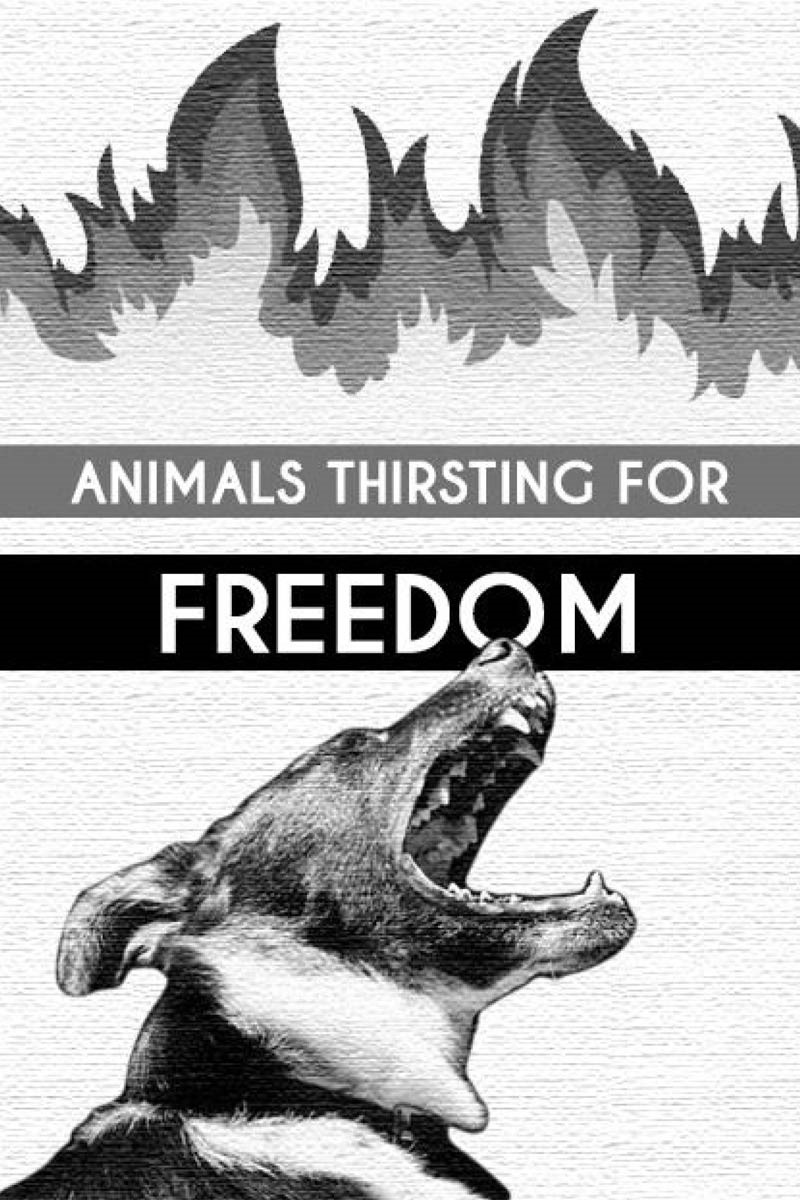 This is zine from the United Kingdom is a response to a recent string of animal liberation actions and the predictable denouncements that came from reformist animal rights organizations. It’s a critique of liberal concepts of animal rights alongside a critique of traditional activist forms and goals. 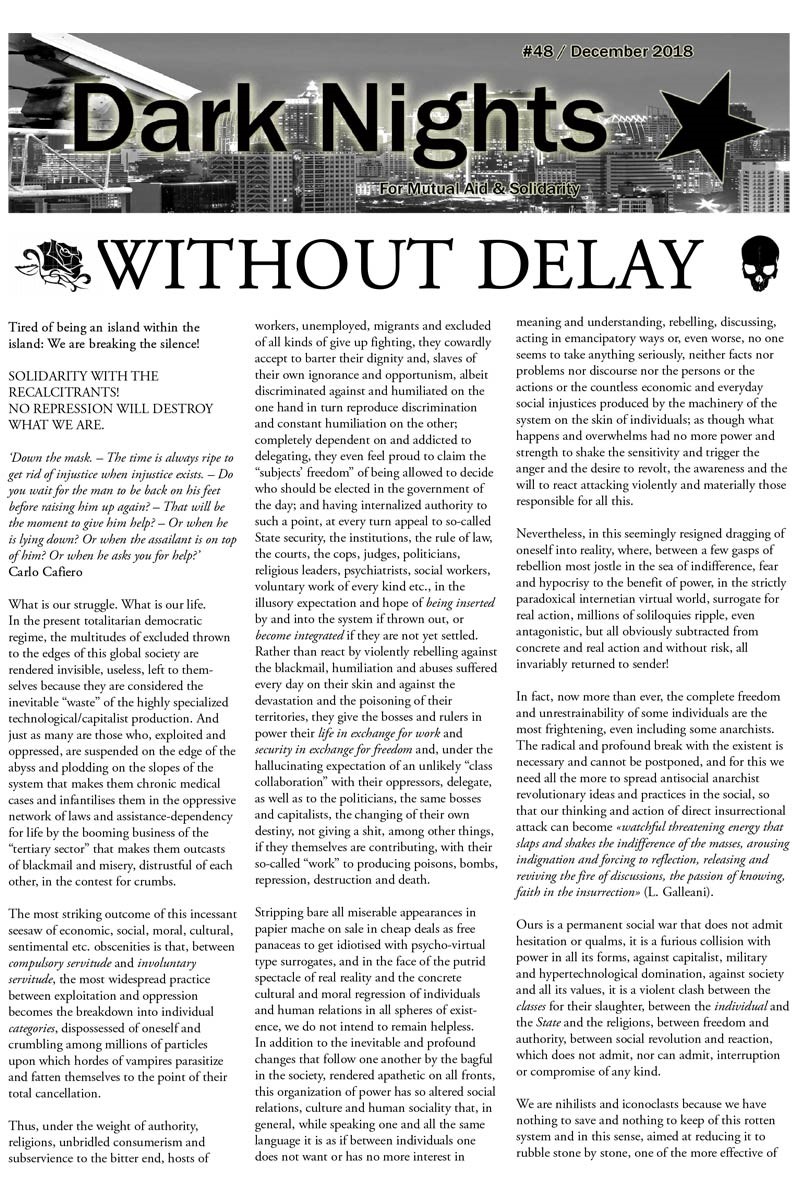 This is the latest issue of this well-known insurrectionary publication. It features the usual action chronicle alongside updates on actions and repression in Russia, Spain, Argentina, and Italy. The zine opens with a longer essay titled “Without Delay” (translated from Italian) that presents a very hard-hitting indictment of the existing world and its systems of social control. 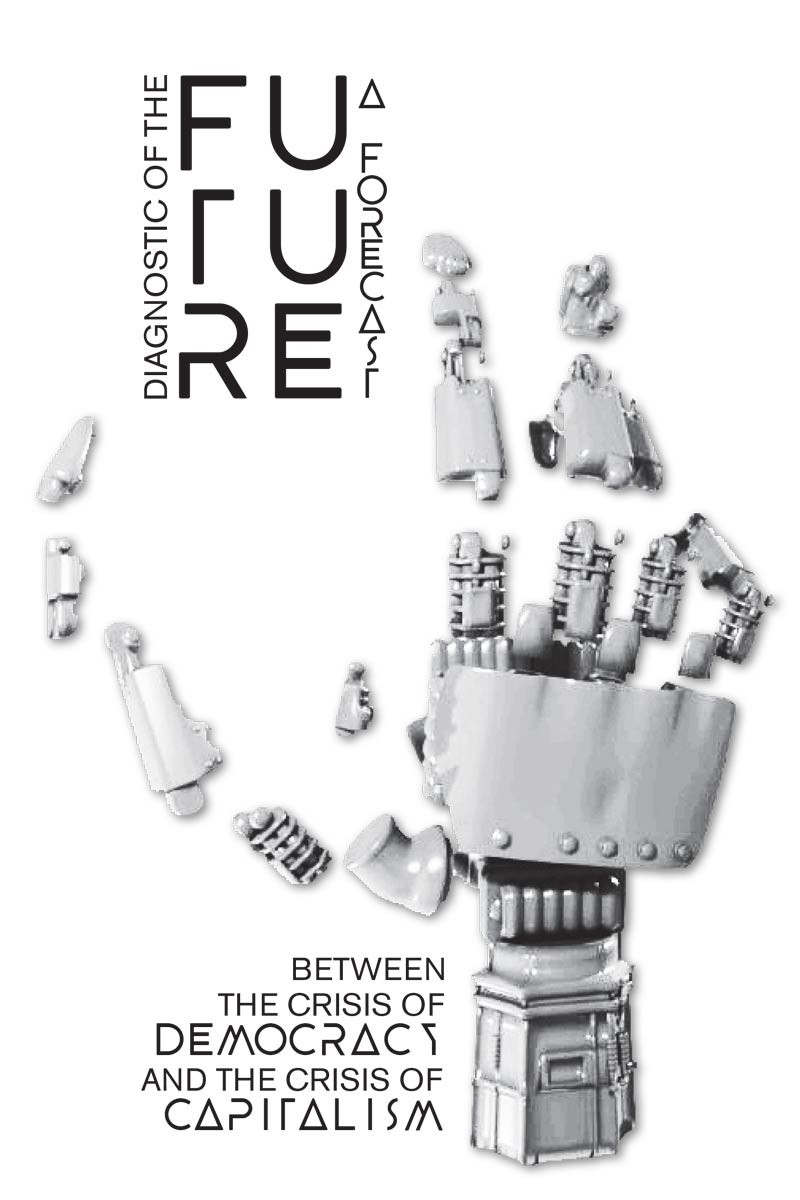 This is a new text by Peter Gelderloos and published by Crimethinc. From Crimethinc:

“In this in-depth analysis, Peter Gelderloos explores the technological and geopolitical changes that movements for liberation will face over the next several decades. How will those who hold power today attempt to weather the economic and political crises ahead? Will artificial intelligence and bioeconomics save capitalism? What’s more dangerous—governments refusing to address climate change, or the technocratic solutions they will propose? Will we see the rise of fascism, or the regeneration of democracy? If we study the challenges that capitalism and the state will confront, we can prepare to make the most of them to put forward another way of life.”

Fascism, Ecology, and the Tangled Roots of Anti-Modernism 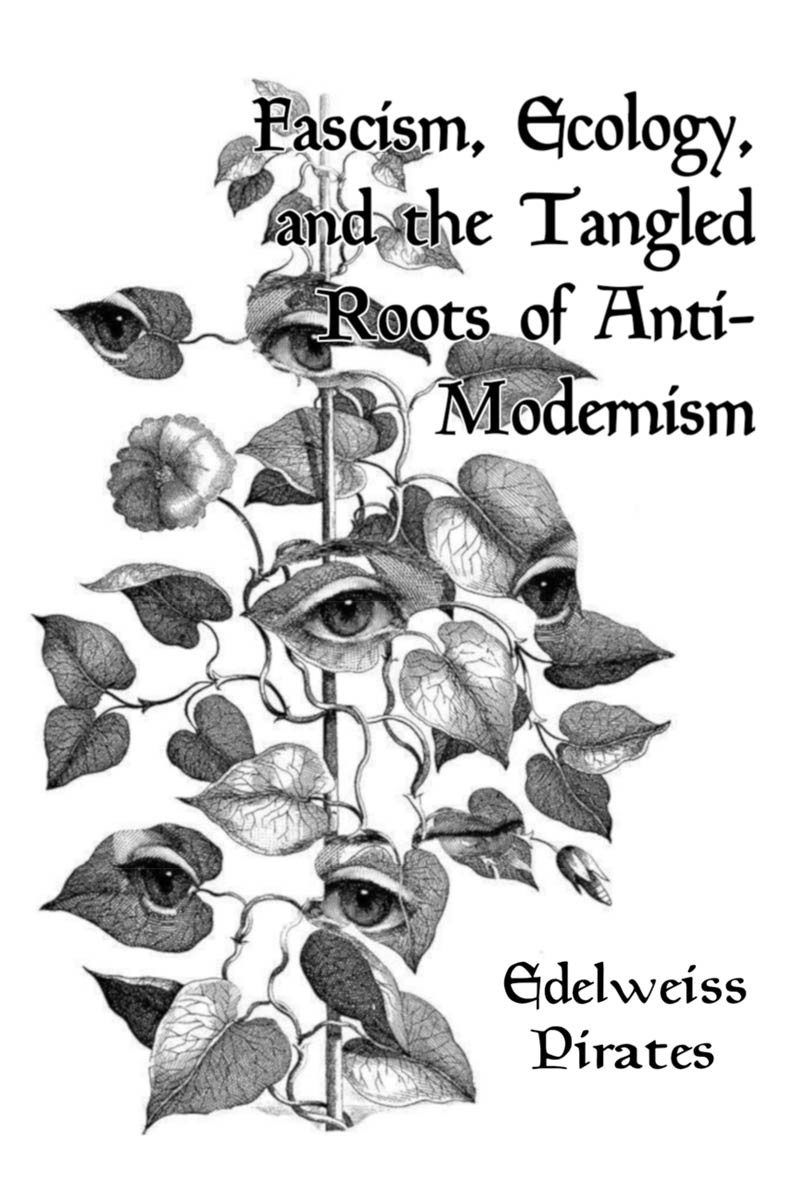 This essay attempts to untangle some of the deeper themes running through contemporary fascism, specifically around the areas of ecology and anti-modernism. The essay has its roots in a series of debates over neo-fascism and crypto-fascism in the green anarchist space. From the intro:

“With its academic style and its inevitable omissions and imperfections notwithstanding, this essay is being released now because I still see it as a worthy preliminary entry in what will prove to be an ongoing discussion about the nature of fascism, anarchism, and modernity. Its subject matter, broadly speaking, is likely to grow in appeal as the alleged “resistance” mobilized by fascistic forces to (post-) modern democratic governance grows more and more insurgent and “green.” The framework of the essay draws heavily upon the works of Zygmunt Bauman and Roger Griffin, and includes a look at the ideas of Julius Evola and Ernst Jünger, two major influences on the esoteric and “deep green” variants of fascism, yesterday and today. It also examines the roots of portions of the Green and organic movements of today in German Romanticism’s more racist applications of a century ago.” 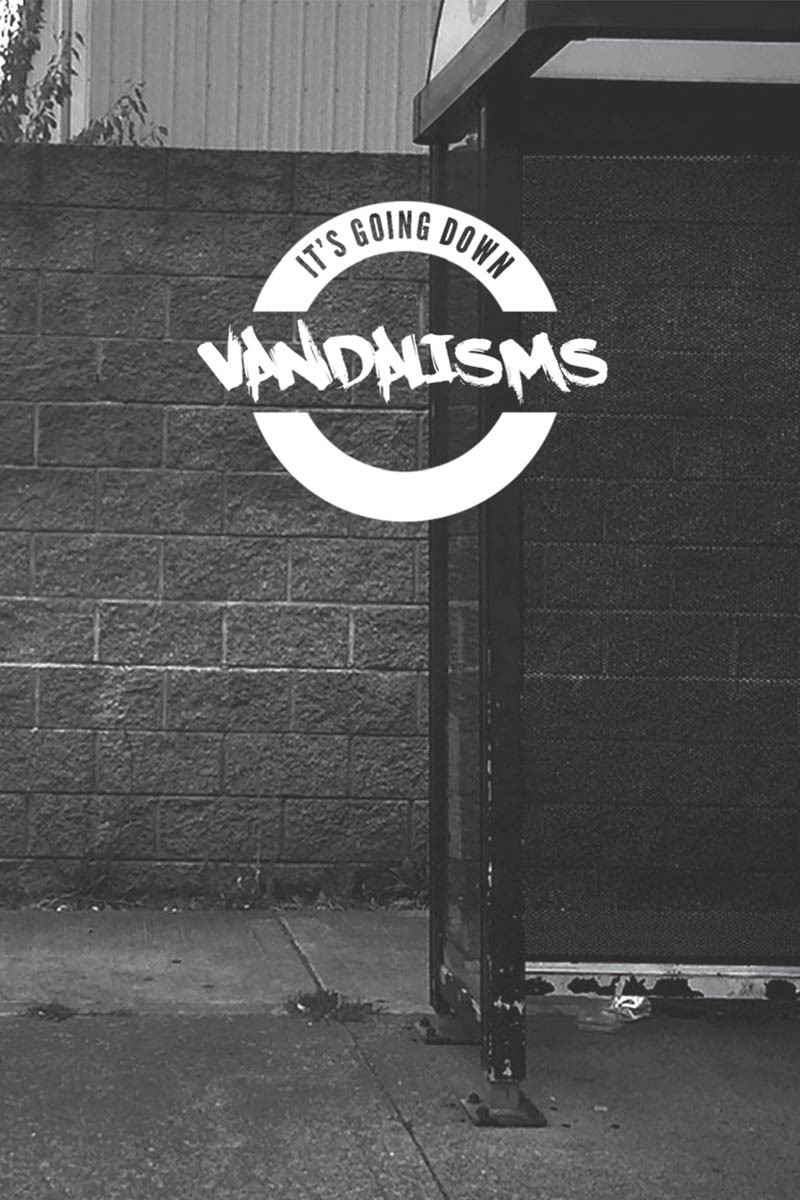 This zine is published by It’s Going Down and it grows from a column that appeared regularly on the website documenting radical graffiti and outlining a theory of why the authors think vandalism is important. This publication expands on that theory and presents a clear and concise case for the importance of vandalism, both in political and non-political forms. It extrapolates a theory where graffiti can be seen as a “signal of disorder” showing that the state’s capacity for social control isn’t total. 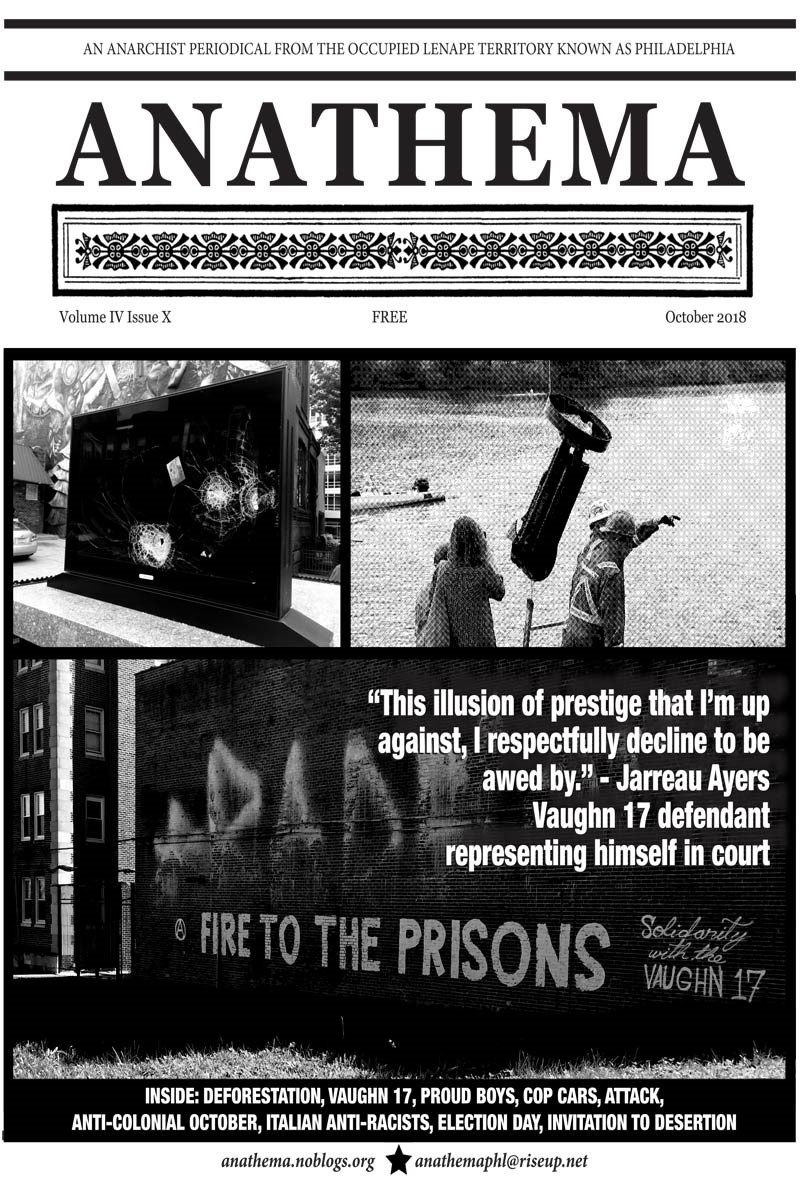 The November issue of Anathema features the usual chronology of actions in Philadelphia alongside a number of longer articles on a variety of topics including the Proud Boys and the Vaughn 17. This issue includes an essay titled “What is Attack?” outlining the theory and practice of anarchist attack. There is also a reprint from the green anarchist journal Backwoods and a small selection of “world news.” This remains a consistently solid local publication. 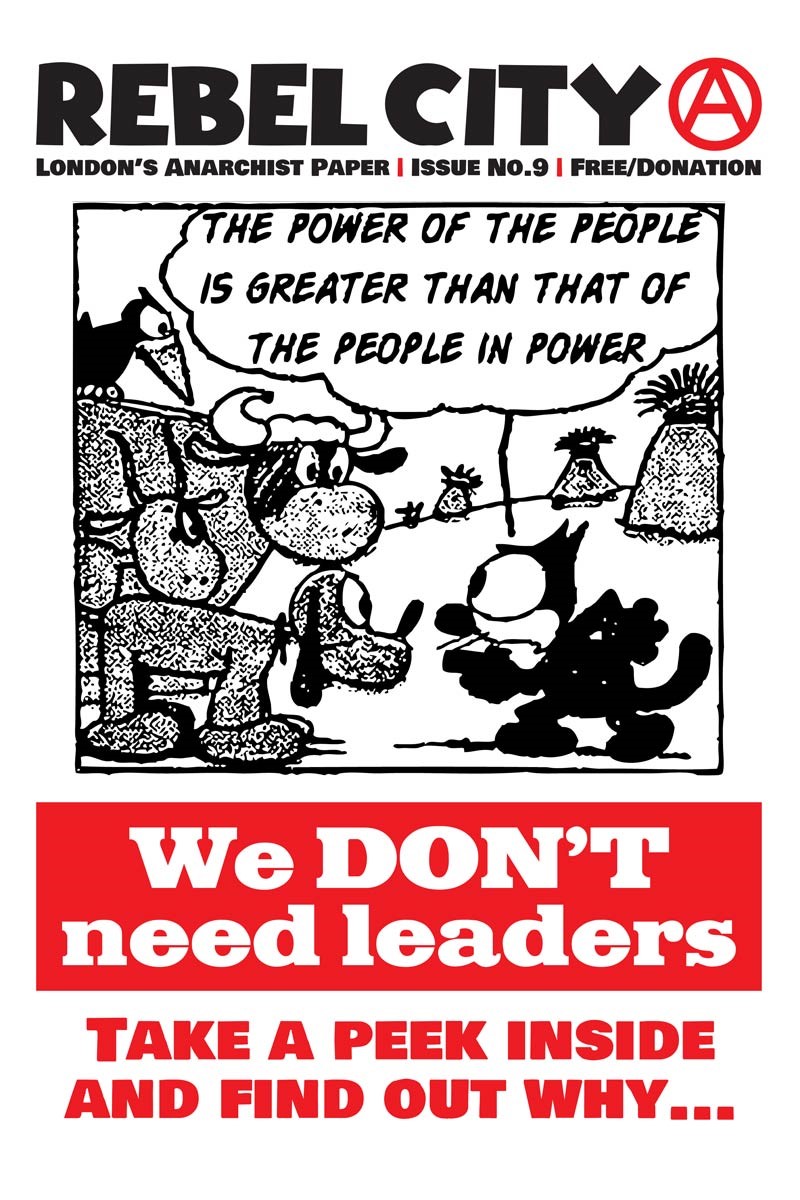 This is an anarchist newspaper from London. Much of the content focuses on housing and development, which isn’t at all surprising given the pace of gentrification across the globe. Judging by this paper, it seems to be a major issue in London as well. All of the content is London focused. It’s worth checking out to see how anarchists in other areas approach putting out a print publication.

I Don’t Bash Back, I Shoot First: On Queer Gangs 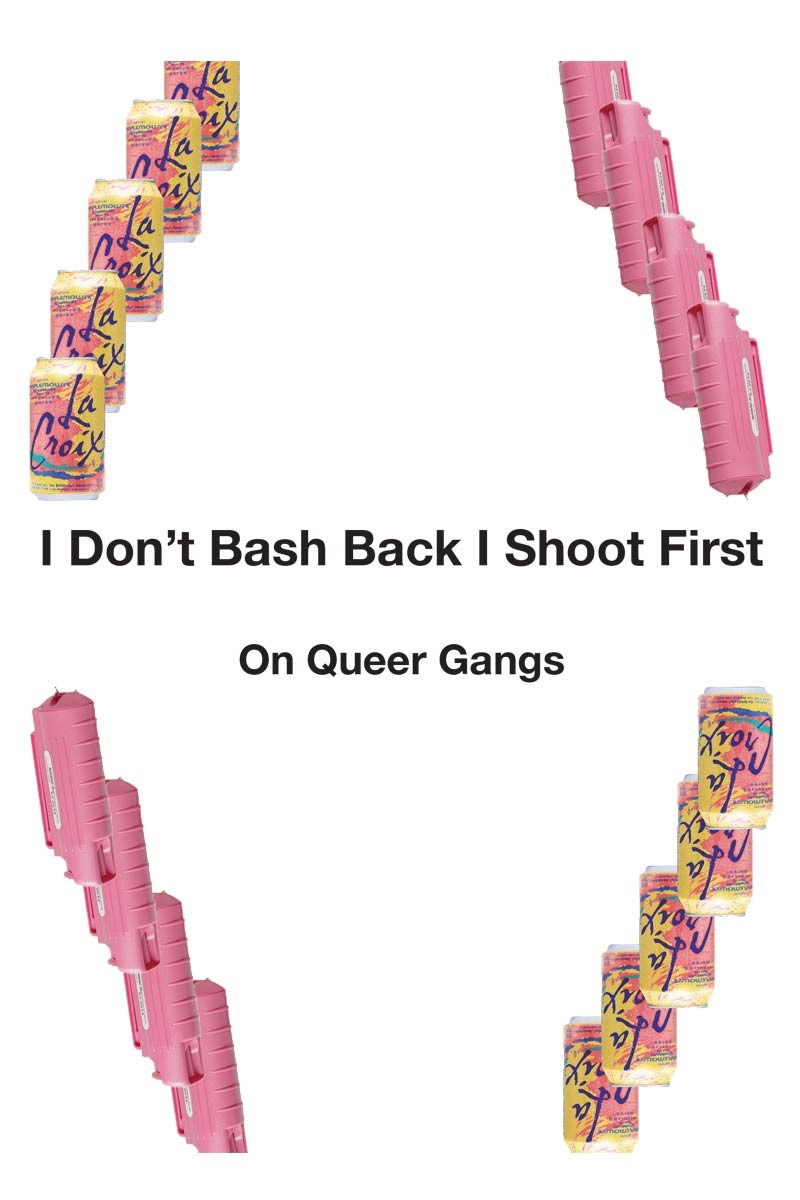 This text first appeared almost a decade ago in the aftermath of the queer anarchist Bash Back! network’s demise. Rather than a political struggle, it argues for an anti-political criminal intimacy that seeks to move away from scripted conflicts, political forms, and identity. This excerpt gives a good sample of the text and the ideas it articulates:

“Our “theory” is really simple: self protection and exploding social war by communalizing violence–to multiply, not exhaust our terror. Build a material social force by living together with relationships between us that build our autonomy and destroys theirs. Start the fight, bring the bashing first; attack and hit back and find others already fighting and build bonds between you—the anarchist scene, outside of the bonds we already share, is mostly a husk to be shrugged off.” 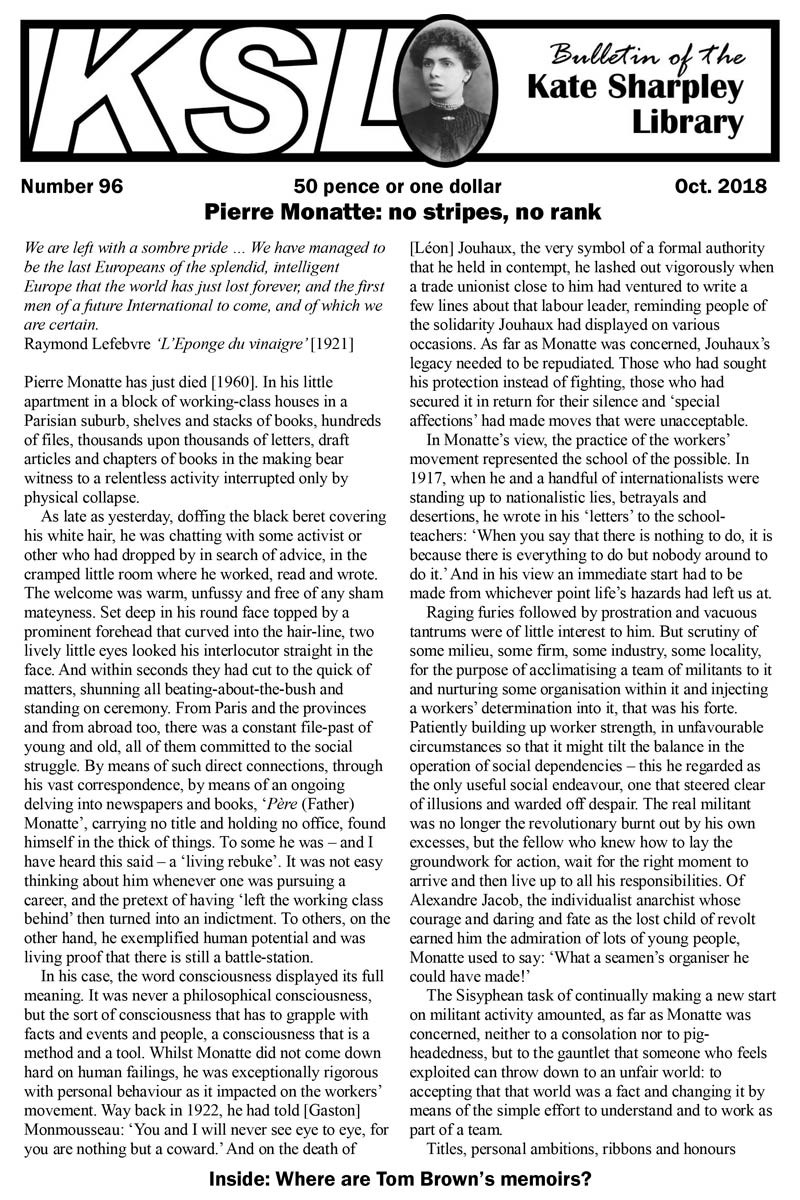 This is the October issue of the KSL Bulletin, a publication of the Kate Sharpley Library. These bulletins are the best source for largely unknown anarchist histories. This issue features reviews of recently published books on anarchist history, some updates, and a cover feature on the anarchist Pierre Monatte.

Nothing to Syndicate: Against the Democracy of Work and the Work of Democracy 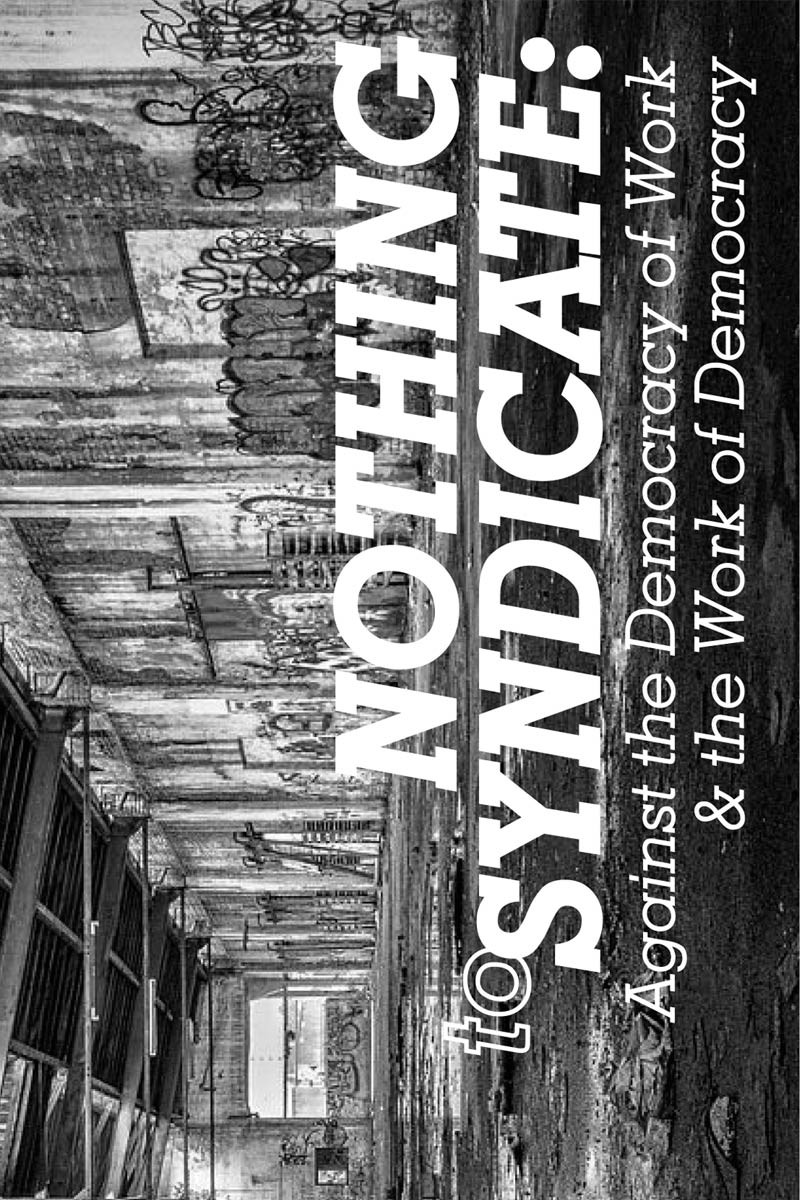 This is a critique of syndicalism and its relevance to the changing world economy. It was written in response to the resurgence of interest in radical politics and the growth of organizations like the Democratic Socialists of America (DSA) and the Industrial Workers of the World (IWW) which articulate a vision of democratically managed economies and work. However, they offer antiquated visions that are based on economic systems that have been fundamentally altered. The authors are right to argue that this has all been said before, but it’s nonetheless refreshing to see an updated critique being designed for dissemination amongst those who are newly radicalized.

There is no Migrant Crisis: Against the Militarization of the Border 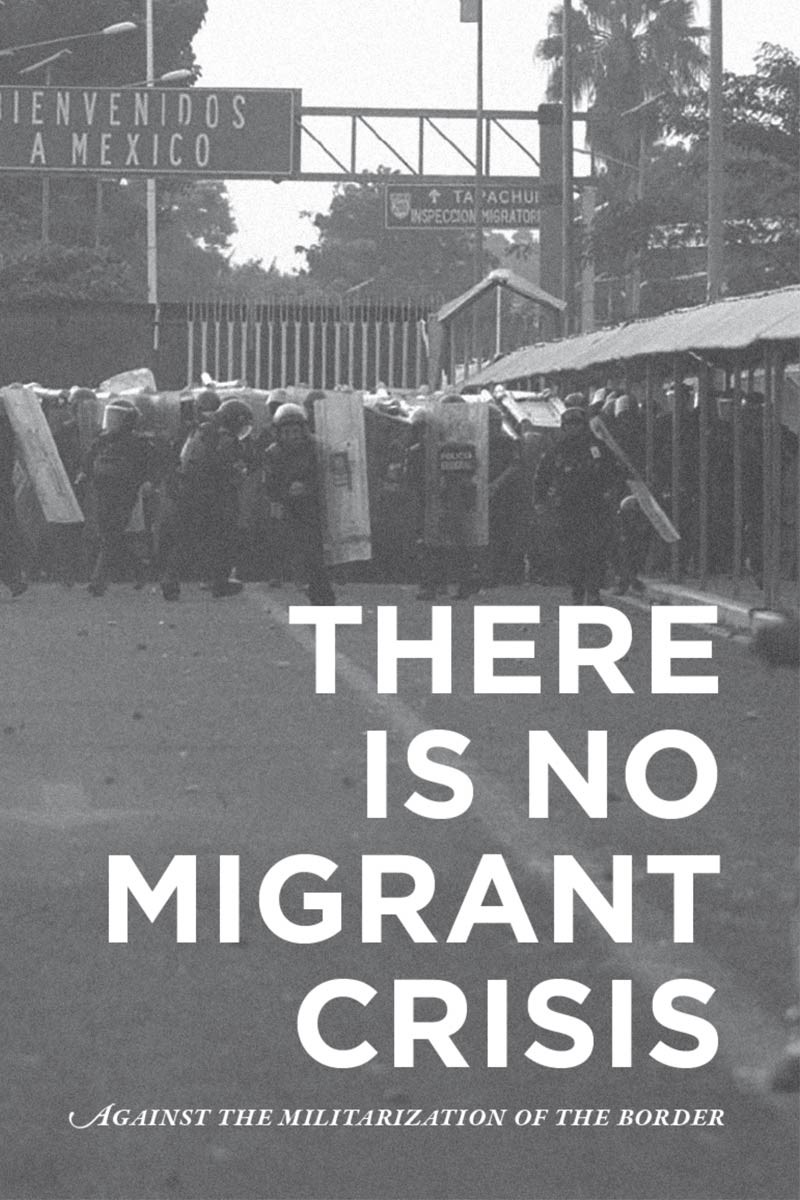 This zine by Crimethinc is written in response to the increasingly racist and nationalist rhetoric being used by President Donald Trump against the migrant caravan that departed from Honduras early this fall. From the intro:

“Donald Trump and his fellow nationalists and racists have been fearmongering about this so-called “migrant caravan” in hopes of mobilizing their base to vote in the November 6 election; their efforts have triggered a wave of fascist violence including last week’s massacre at a synagogue in Pittsburgh. Still more troubling is Trump’s order to send thousands of US troops to “defend” against the caravan. This sets yet another precedent for the use of the military against civilian populations. Here, we explain why everyone who is not a racist ideologue has a common stake in resisting the militarization of the border, and offer an array of options for what you can do about it.”

Against Anarcho Liberalism and the Curse of Identity Politics 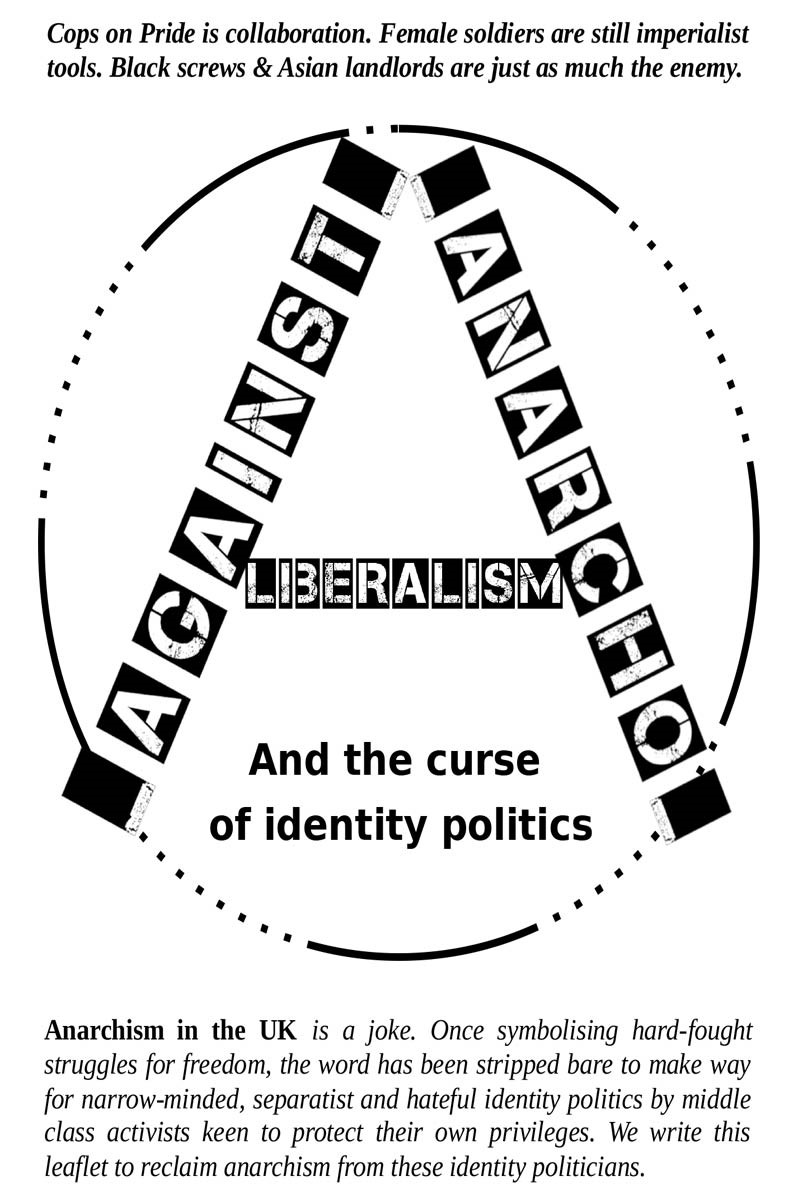 This zine is an anarchist critique of identity politics, this time coming from the United Kingdom. The text gives the strong impression that liberal identity politics are having some kind of resurgence in the UK with the opening:

**“Anarchism in the UK is a joke. Once symbolising hard-fought struggles for freedom, the word has been stripped bare to make way for narrow-minded, separatist and hateful identity politics by middle class activists keen to protect their own privileges. We write this leaflet to reclaim anarchism from these identity politicians.”

What follows is fairly standard critique of identity politics and its limits, yet is one that is being repeated over and over.

There’s No Such Thing As Revolutionary Government 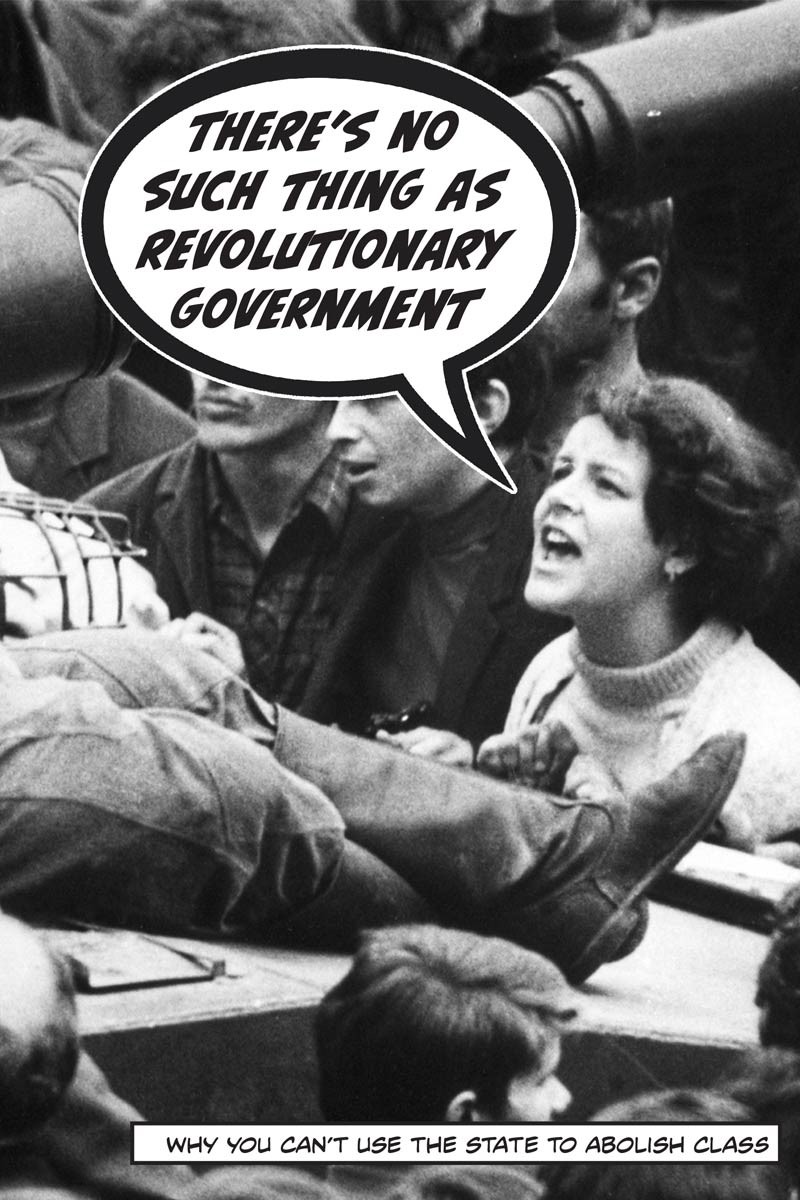 “Since the mid-19th century, anarchists have maintained that the key to liberation is not to seize the state but to abolish it. Yet from Paris to St. Petersburg, from Barcelona to Beijing, one generation of revolutionaries after another has had to learn this lesson the hard way. Shuffling politicians in and out of power changes little. What matters are the instruments of rule—the police, the military, the courts, the prison system, the bureaucracy. Whether it is a king, a dictator, or a Congress that directs these instruments, the experience on the receiving end remains roughly the same.” 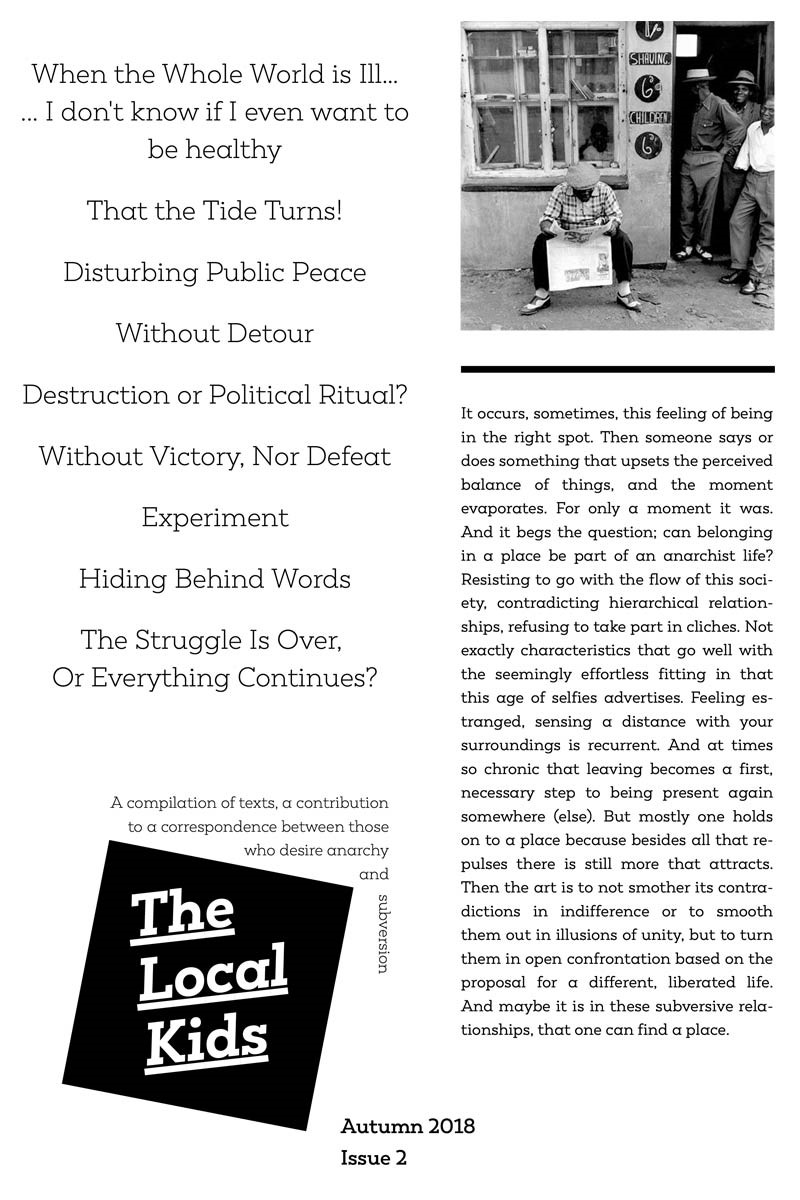 This solid zine presents English translations of texts that originally appeared outside of North America. They all come from what could be vaguely described as an insurrectionary perspective and cover a lot of different areas from wind power and technology to the black bloc the act of creating theory. This publication promotes a depth of thinking and analysis that is sadly rare in the anarchist space and it is definitely worth checking out.

Writings of the Mary Nardini Gang 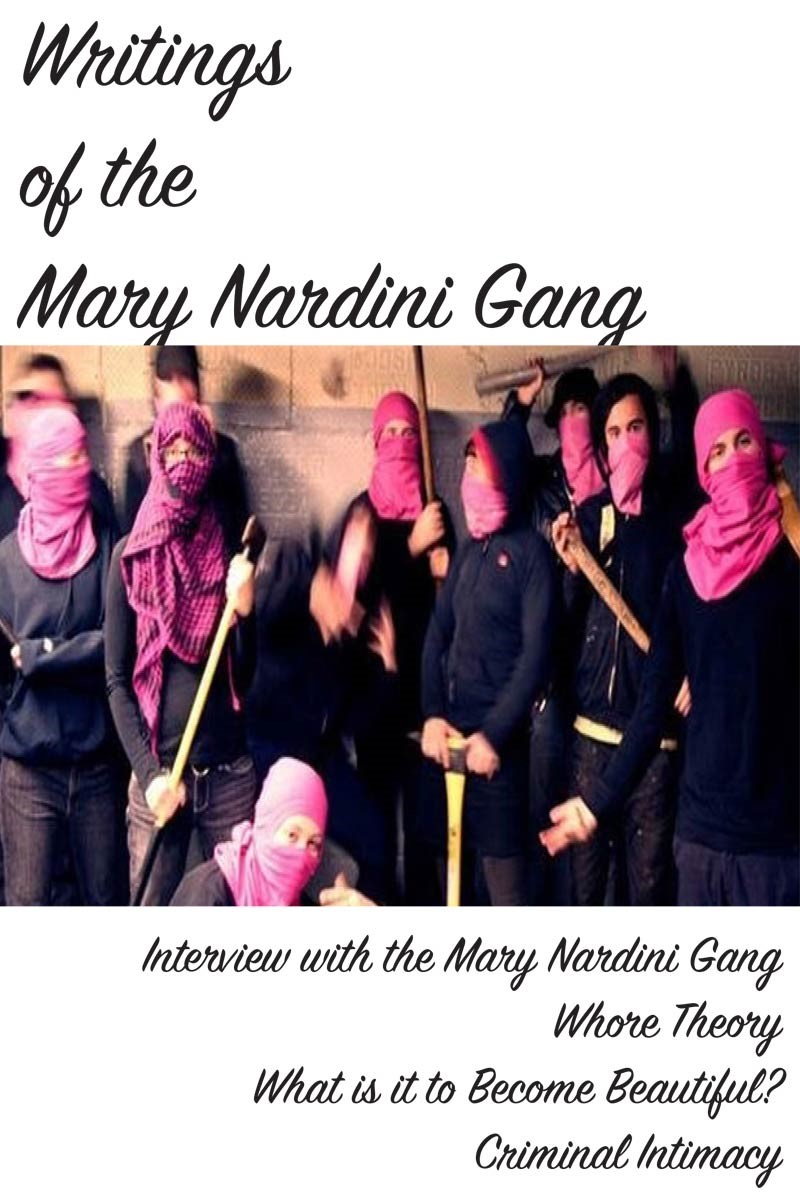 “The essays in this zine were written by the Mary Nardini Gang/A Gang of Criminal Queers. These texts come from Bash Back!. Bash Back! was a queer anarchist tendency that started in the Midwest. It aimed to be a net- work for queer anarchists to connect and to confront the pitiful normality of capital, the state, and heterosexuality.”