The following zines were published within the broad anarchist space over the past month. We encourage folks to read and share these as they see fit.

You can view past round-ups and you can submit zines for inclusion next month. 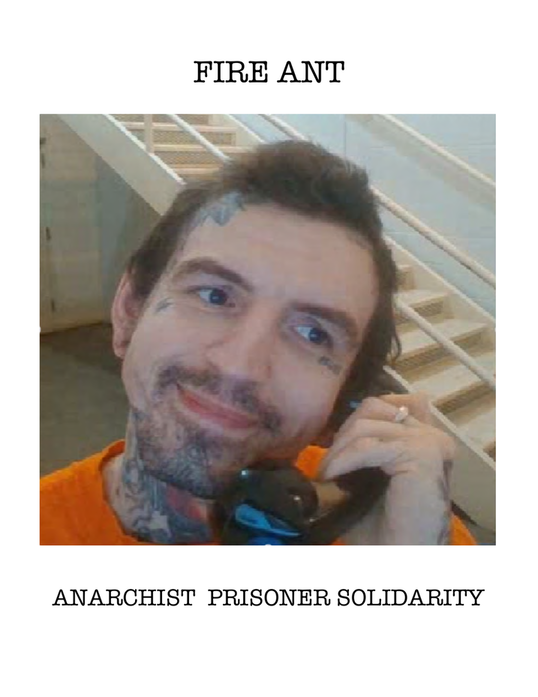 Bulletin of the Kate Sharpley Library #103 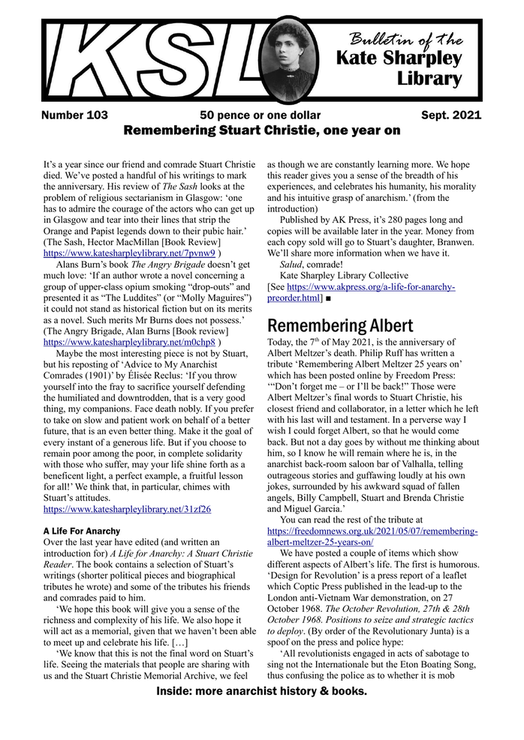 The September 2021 edition of this publication from the Kate Sharpley Library, features the usual news about the Library, reviews of recent books on anarchist history, and related articles. There is a reflection on the death of Stuart Christie last year as well as a piece looking at the legacy of Albert Meltzer. 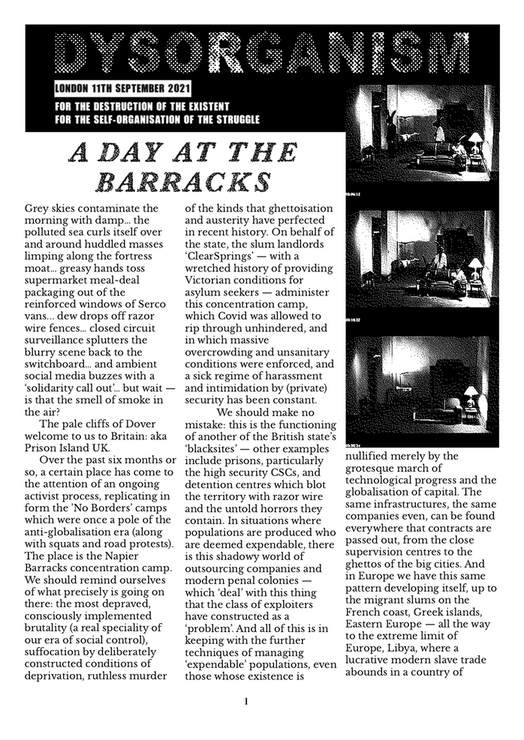 This publication out of London has the tagline “For the destruction of the existent / For the self-organisation of the struggle”. The tagline clearly situations this publication within the insurrectionary anarchist realm. The articles keep with this theme, with a lot of critiques of the anarchist practice the limited perspective of social movements. There is a lot of focus on prisons and the insurrectionary perspective. Additional articles focus on disruptive actions against the Tour de France and another reflecting on the legacy of 9/11.

Never Surrender: A History of the Antifascist Skinhead Movement 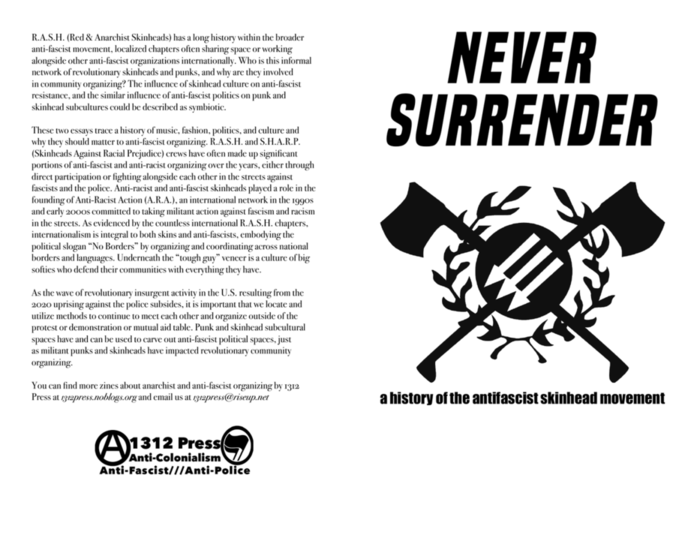 This zine from 1312 Press looks at the history of Red & Anarchist Skinheads (R.A.S.H.) and Skinheads Against Racial Prejudice (S.H.A.R.P.) and their involvement within the broader anti-fascist space. The zine features two essays covering f music, fashion, politics, and culture and why they should matter to anti-fascist organizing. R.A.S.H. and S.H.A.R.P. crews have made up significant portions of anti-fascist and anti-racist organizing over the years, either through direct participation or fighting in the streets against fascists and the police. Anti-racist and anti-fascist skinheads played a role in the founding of Anti-Racist Action (A.R.A.), an international network in the 1990s and early 2000s committed to taking militant action against fascism and racism in the streets. 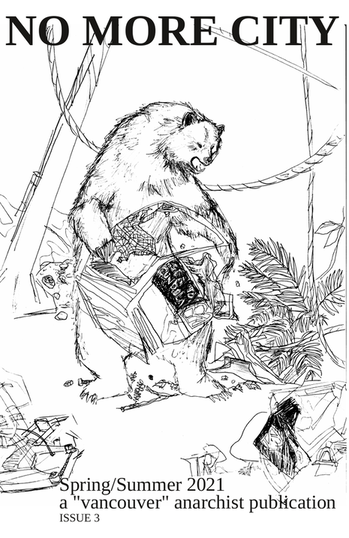 No More City is an anarchist publication covering so-called Vancouver and the greater British Columbia area. The publication features the expected direct action reports, communiqués, and writings concerning the local struggles and resistance. The publication positions itself in an interesting way (explicitly against the city) and speaks to the importance of these publications. It is worth quoting at length:

We are an anarchist publication based out of so-­called vancouver. We are a collective of cats who live in the city because that’s where pals and projects are at. Meanwhile, we plug our ears through the constant car traffic and construction noise and breathe in asphalt fumes and car exhaust. We watch all of our favourite spaces disappear through gentrification and see fewer nonhuman animal friends every year. The city is life support. The city is death.

We were inspired by finding past writings about the city across periods of time, from more recent publications like Wreck, to old riot grrrl zines like Cockroach and HAG. Finding these was a gift. The writings and news reports and spoken word resonances left by other anarchists and radicals are like treasures to excavate. Without their writing, we would have no guide to contextualize what we see or to show us the paved over and blank spaces where wild things used to be. We hope to leave behind helpful scraps for anyone in the “future.” We want to put a dot on a map or a pinpoint of light in a constellation in our locale’s patchwork anarchist discourse. We want to have a record that we were here, and we all hated this too!

Our intention with this publication is to document a history that exists in the whispers between friends, in anonymous communiqués and midnight actions, and in bits of knowledge passed on through word of mouth or online archives; A history that is excluded from textbooks and corporate media accounts of time and place. We have had to dig to find this knowledge, and want to lessen the amount of searching that future anarchists have to do. We hope that by adding to the historical anarchist continuity, we can strengthen the shared, intergenerational knowledge of our communities. 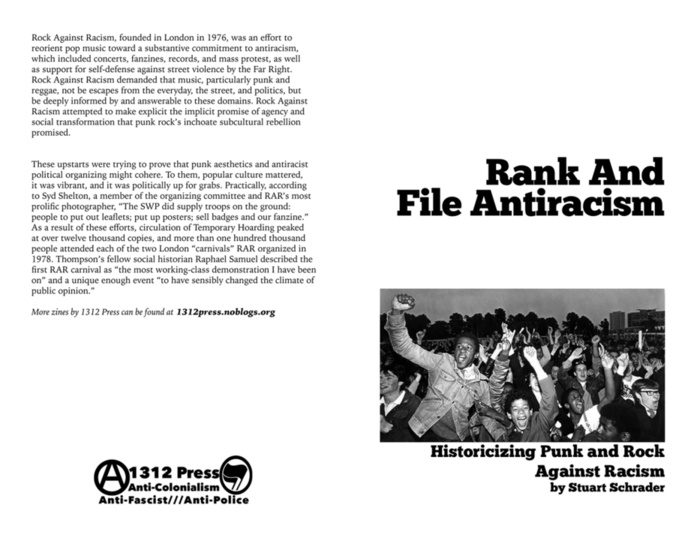 This zine by 1312 Press looks at the history of the Rock Against Racism via an essay by Stuart Schrader. Rock Against Racism, founded in London in 1976, was an effort to reorient pop music toward a substantive commitment to antiracism, which included concerts, fanzines, records, and mass protest, as well as support for self-defense against street violence by the Far Right. Rock Against Racism demanded that music, particularly punk and reggae, not be escapes from the everyday, the street, and politics, but be deeply informed by and answerable to these domains. Rock Against Racism attempted to make explicit the implicit promise of agency and social transformation that punk rock’s inchoate subcultural rebellion promised. 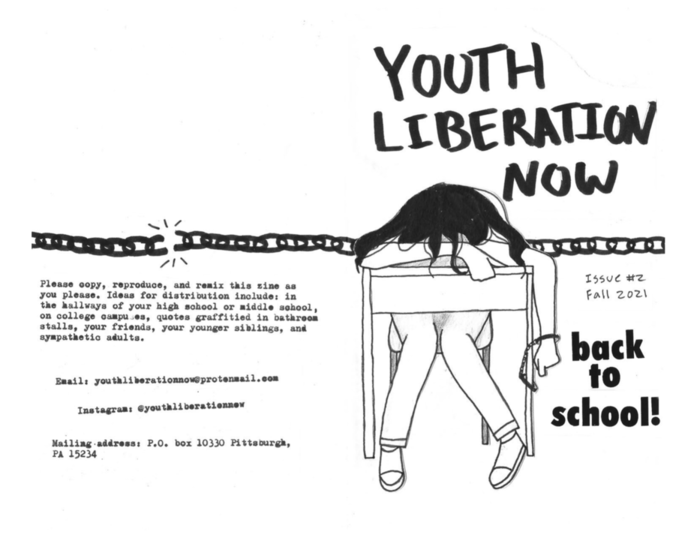 Youth Liberation Now presents a strong critique of school written by a younger anarchist (16 years old) and written for younger folks. In the intro they state that “this zine is all about youth liberation and is entirely written and compiled by young people for young people.” It has strong critiques of mandatory schooling, censorship, and surveillance. There is also an article titled “School According to Students” that features 8 high school students reflecting primarily on the negative aspects of high school. 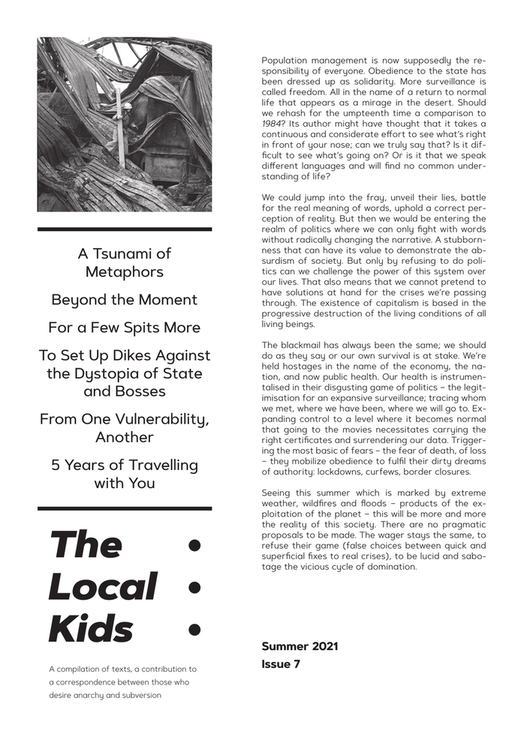 The Local Kids is a of “a compilation of text, a contribution to a correspondence between those who desire anarchy and subversion.” This publication presents some of the more engaging writing around and this issue is no different. There are thoughtful explorations of language in a world dominated by technology, anarchist aspirations, and the ramifications of control and isolation during the COVID pandemic.

Anarchist Zines & Pamphlets Published in September was published on October 03, 2021