We’ve long advocated sharing zines and forming real world relationships over the constant scrolling of social media and digitally mediated communication. This takes on renewed importance as more anarchists are being banned from Twitter. A similar wave of banning of anti-fascist accounts took place in 2020. We shouldn't rely on corporate networks to spread anarchist ideas. We should always be working on developing our own communications infrastructure and zines can play a vital part in that.

This month's selection of zines covers a wide range of topics from chronicling contempary anarchist actions to uncovering lesser known episodes in anarchist history. As always, please share widely. We aim for a representative swath here and don't necessarily agree with/endorse all of the zines linked here.

The photo that accompanies this post is is from Radical Graffiti. 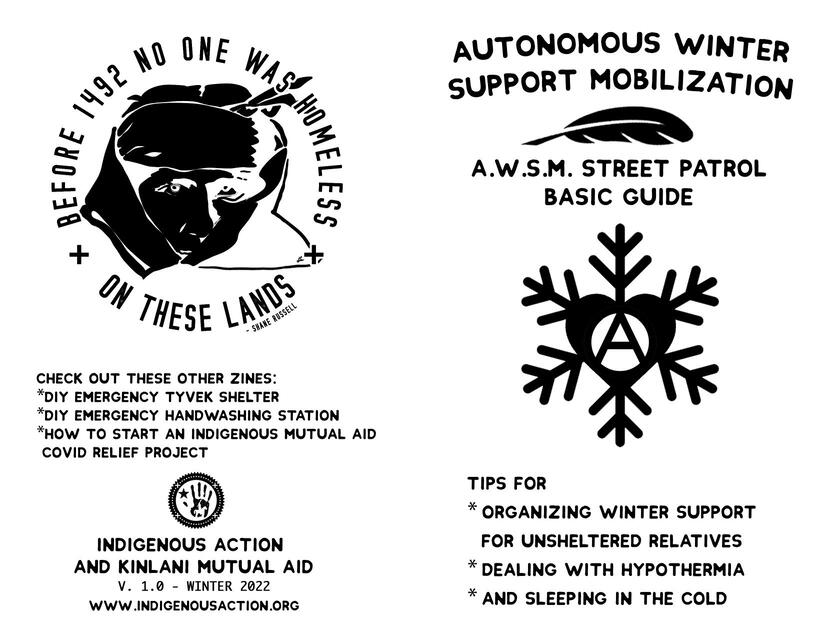 A new zine from Indigenous Action Media on organizing winter street patrols as mutual aid with homeless folks. From the intro:

This mini-zine was created with our experience in a mid-sized town being at close to 7,000 feet in elevation with intense winter storms and a relatively smaller unsheltered community than other larger occupied areas. It’s notoriously hard to squat and camp in (though we’ve done it). We use the term “patrol” cause it’s what we started with and it stuck, use whatever terms your crew is cool with like “outreach” or whatever. Please amend and edit for your area.

Through building solid relationships of support we can go beyond paternalistic charity and provide meaningful solidarity that goes beyond one season. Mutual aid isn’t about being a “savior” it’s about solidarity. Make it a point with your crew that your effort organizes with unsheltered relatives. Street Patrol should be part of a larger effort to attack the root causes of homelessness such as capitalism and colonialism such as; Land Back, abolishing private property, fighting against the commodification of housing by supporting free camps and squats, food not bombs/meal distros, supporting rent strikes and attacking “slumlords” etc. 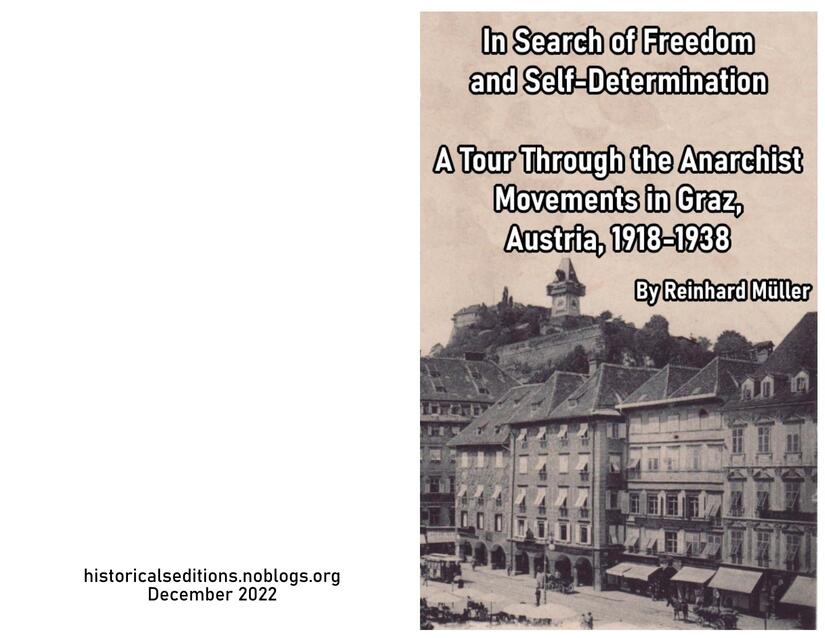 In Search of Freedom and Self Determination: A Tour Through the Anarchist Movements in Graz, Austria, 1918–1938

This zine (published by Historical Seditions) is translation of a 2018 article by historian Reinhard Müller. Graz was a major node of anarchism in Central Europe during the interwar years. The city was home to several anarchist cultural and mutual aid organizations, and the central hub of a network of underground vasectomy clinics. With the rise of fascism Graz anarchists continued their struggle through secret affinity groups. Graz’s most famous anarchist writer, Rudolf Großmann aka Pierre Ramus, is relatively well-known in German-speaking anarchist circles, but the lively history of the Graz anarchist movements remains a niche subject this zine hopefully sheds light on. 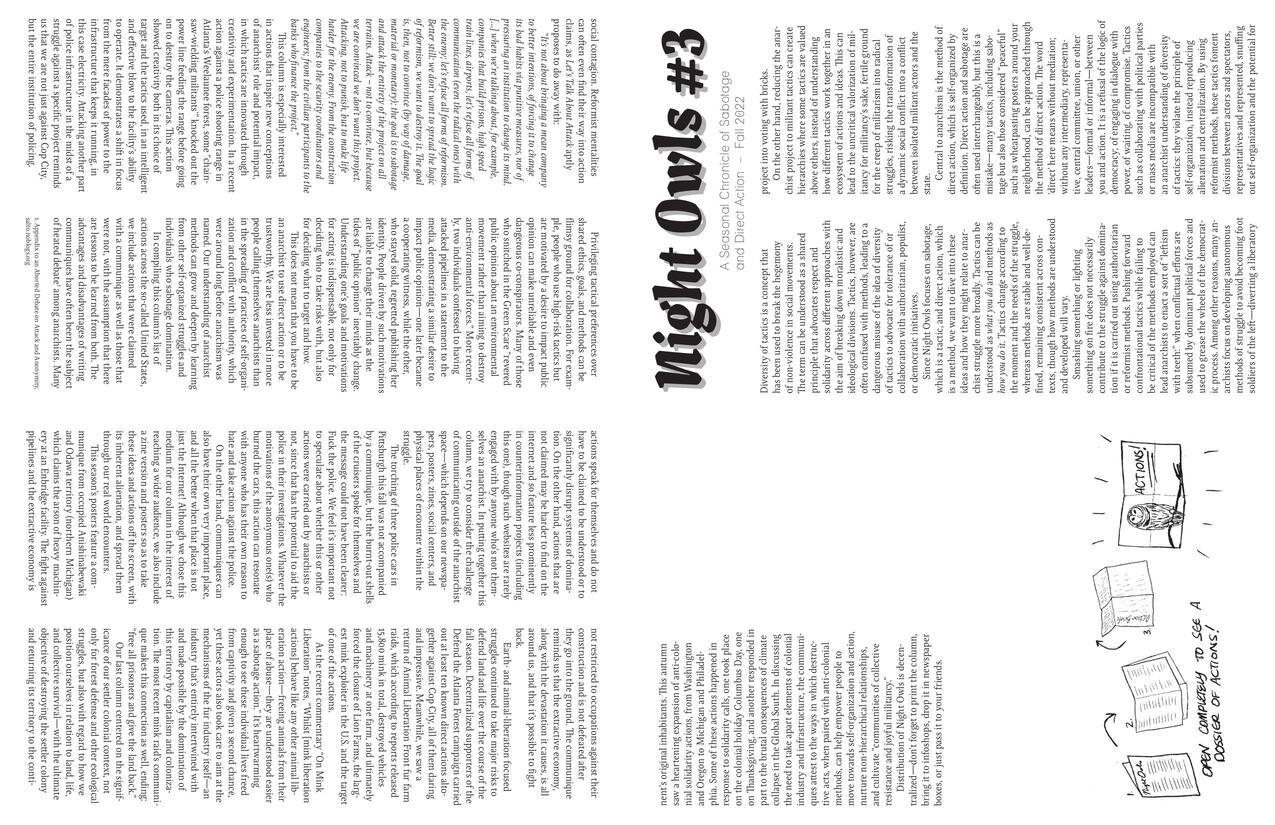 This is the fall issue of Night Owls, “a seasonal chronicle documenting actions against power, claimed and unclaimed, from across the territory occupied by the United States.” It includes the usual list of actions alongside an editorial that delves into debates around tactics, communiques, and militancy. From the intro:

Our last column centered on the significance of our settler colonial context, not only for forest defense and other ecological struggles, but also with regard to how we position ourselves in relation to land, life, and collective survival—with the ultimate objective of destroying the settler colony and returning its territory to the continent’s original inhabitants. This autumn saw a heartening expansion of anti-colonial solidarity actions, from Washington and Oregon to Michigan and Philadelphia. Some of these actions happened in response to solidarity calls, one took place on the colonial holiday Columbus Day, one on Thanksgiving, and another responded in part to the brutal consequences of climate collapse in the Global South. In discussing the need to take apart elements of colonial industry and infrastructure, the communiques attest to the ways in which destructive acts, when paired with anti-colonial methods, can help empower people to move towards self-organization and action, nurture non-hierarchical relationships, and cultivate “communities of collective resistance and joyful militancy.” 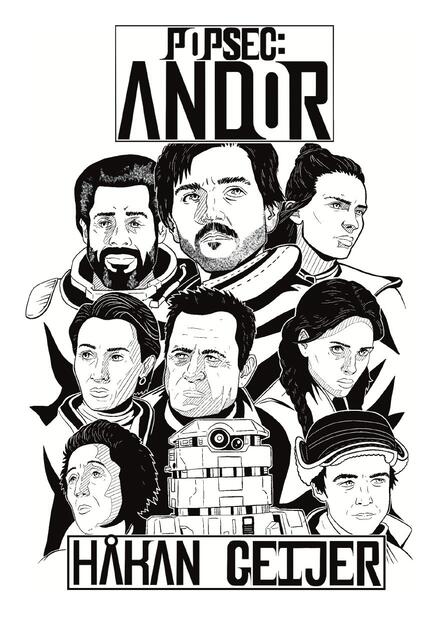 A zine the uses the plot of the Star Wars series Andor to reflect on security culture trends and OpSec practices within our radical communities.” Not having seen the show, I can’t speak to the efficacy of using it to teach security culture, but it is nice to see new ways of sharing important concepts. Humor and a variety of approaches is always appreciated. 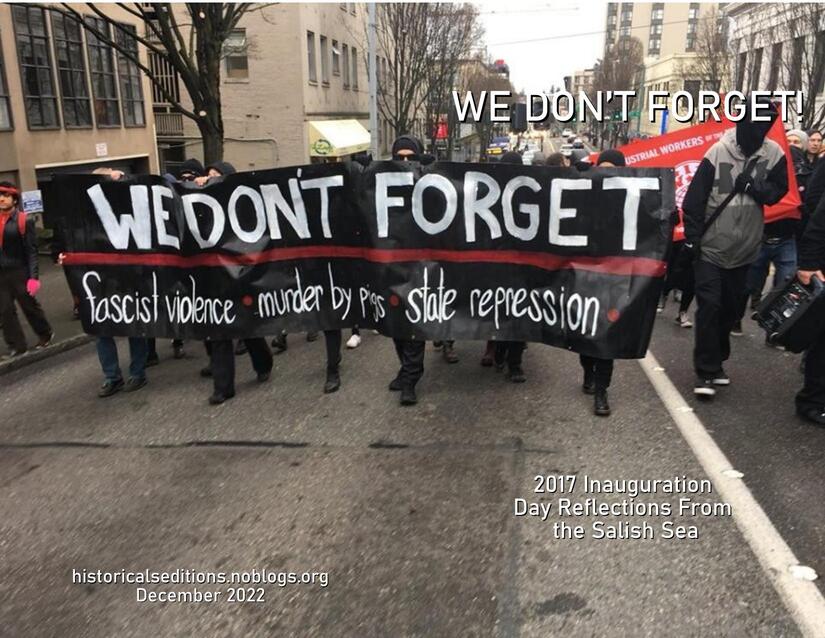 We Don’t Forget! 2017 Inauguration Day Reflections from the Salish Sea

This zine – published by Historical Seditions – collects reportbacks and communiques from Seattle and Olympia related to protests surrounding the inauguration of Donald Trump. As hundreds of protesters were being arrested in Washington, D.C., intense protests against rising fascism broke out throughout the rest of the so-called United States. Seattle’s University of Washington was a particularly heated site of confrontation, as alt-right provocateur Milo Yiannopoulos was scheduled to speak that day. While Milo’s event was significantly disrupted, one antifascist attempting to deescalate a fight was shot by a Trump supporter who would ultimately be acquitted at trial. The events of that day are detailed in this zine, along with parallel protests in Olympia and a followup action memorializing the anniversary of the shooting. 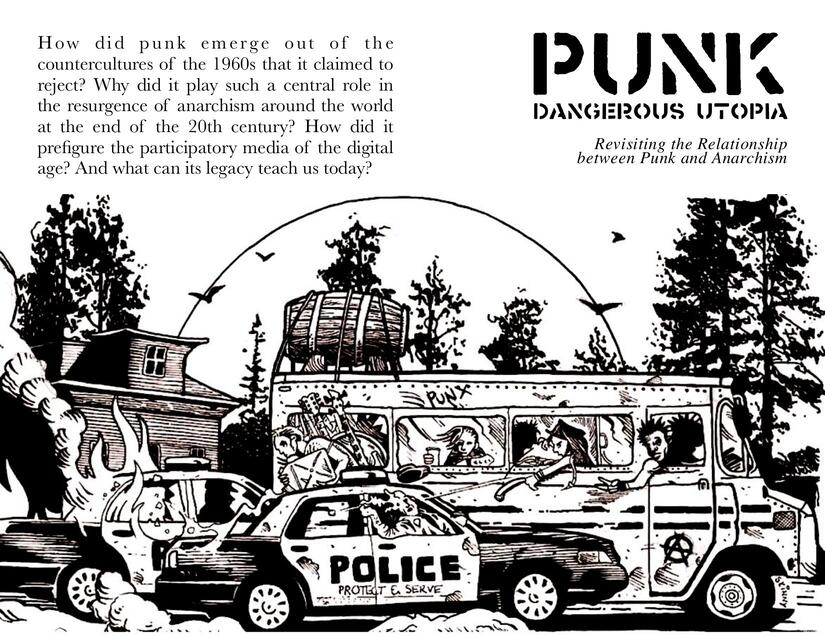 This is a text by Crimethinc formatted into a handy zine format by Filler Distro. It presents an engaging and brief history of the relationship between anarchy and punk and why it was a critical part of the anarchist space in the late 20th century. It’s definitely worth reading. The text itself is a forward to a new anthology on the relationship between anarchism and punk rock titled Smash the System: Punk Anarchism as a Culture of Resistance. 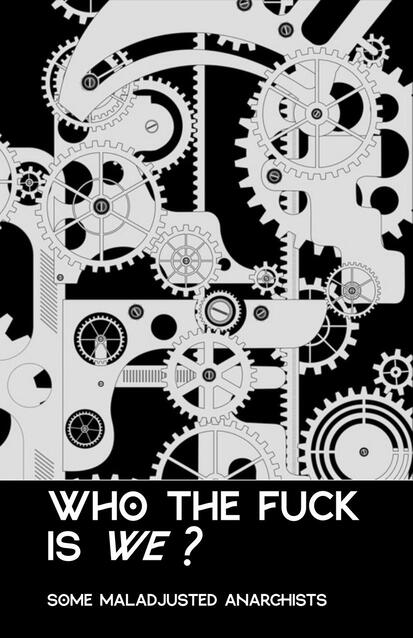 Who the Fuck is We?

A zine that comes out of the strike in the University of California system, it does an excellent job critiquing both academia and the concept of work itself: 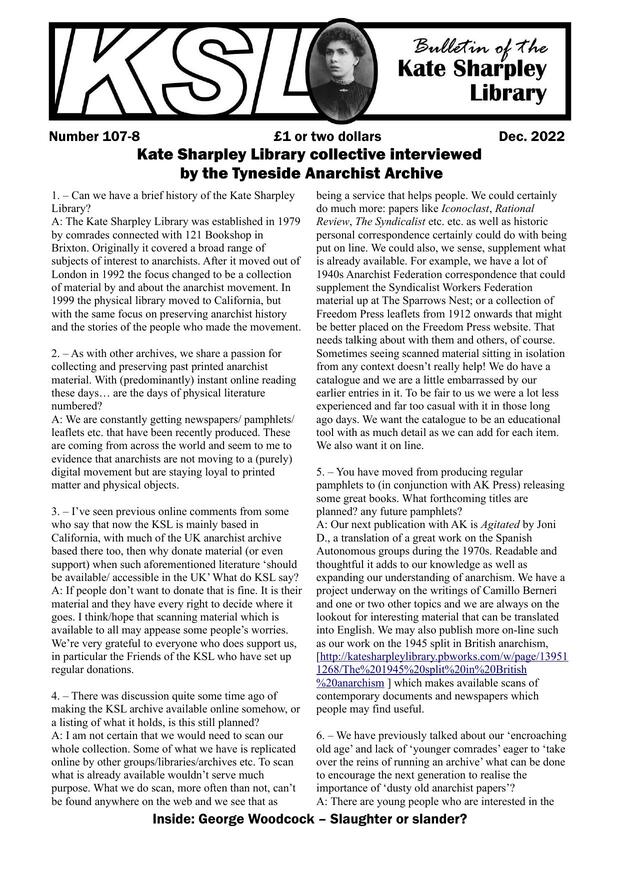 A double issue of this long-running bulletin of anarchist history. It has the usual assortment of book reviews, recently digitized older texts, and anarchist miscellanea. This issue includes a long look at the origins of the conflict between mid-20th century anarchists George Woodcock and Albert Metzer. There is also an interview with the Kate Sharpley Library on the importance of print. 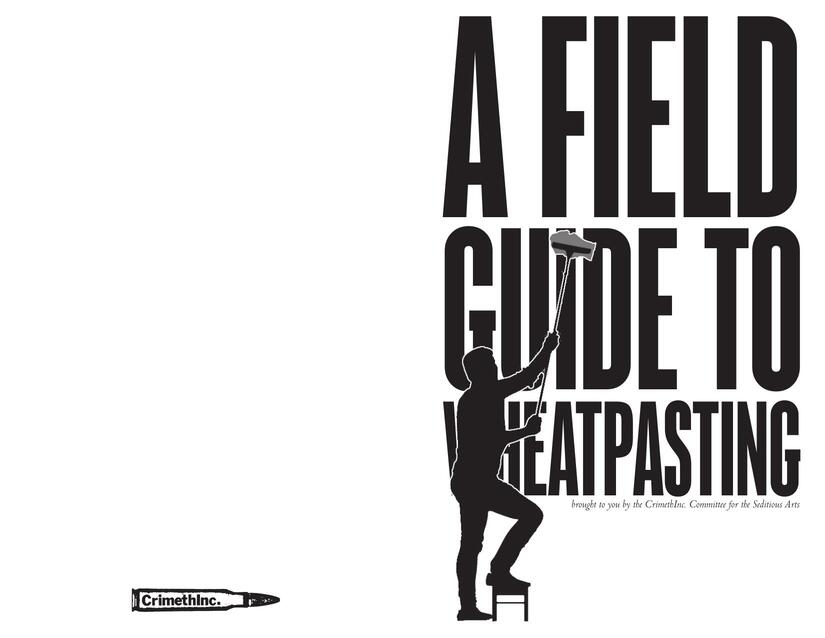 A Field Guide to Wheatpasting

Published by Crimethinc this guide covers everything you need to know about wheatpasting. Wheatpasting posters has been a traditional way to spread anarchist propaganda and to redecorate public space. It covers how to make wheatpaste, how to use wheatpaste, and even offers some suggestions on how to design eye-catching posters. Hopefully this prompts a resurgence in wheatpasting as more anarchist projects get kicked off corporate social media platforms.

Anarchist Zines & Pamphlets Published in December 2022 was published on December 31, 2022