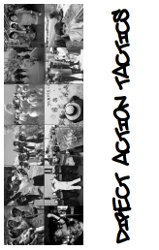 There have been many times when we have wished that we had a zine like this. Especially when we find ourselves talking to folks that are “new” to anarchism and the whole notion of fighting back, it’s sometimes difficult to start a conversation on tactics. This zine offers a broad overview of direct action tactics and basic ideas for how to successfully implement them. In addition, it discusses the importance of affinity groups for undertaking these ideas. It offers a range of ideas that move well beyond the simple idea that “protest” is just about holding signs and courting lawmakers. Within its pages you will find a basic primer on a broad range of tactics: squatting, affinity groups, pie-ing, culture jamming, reclaim the streets, guerrilla gardening, jail solidarity, blockades, etc.

The zine is made of of selections from a book titled We Are Everywhere: The Irresistible Rise of Global Anti-capitalism that was edited by Notes from Nowhere. The original book chronicles the anti-capitalist/anti-globalization movement of the late-1990s and early-2000s. Consequently, a lot of the tactics discussed here come out of that context.

As best we can remember, this zine was picked up at the 2003 anti-F.T.A.A. (Free Trade Area of the Americas) convergence in Miami, Florida. It was originally published by the Orange County Revolutionary Anarchist Collective. Thanks to them for the idea.

Download the zine from us or from Zine Library.