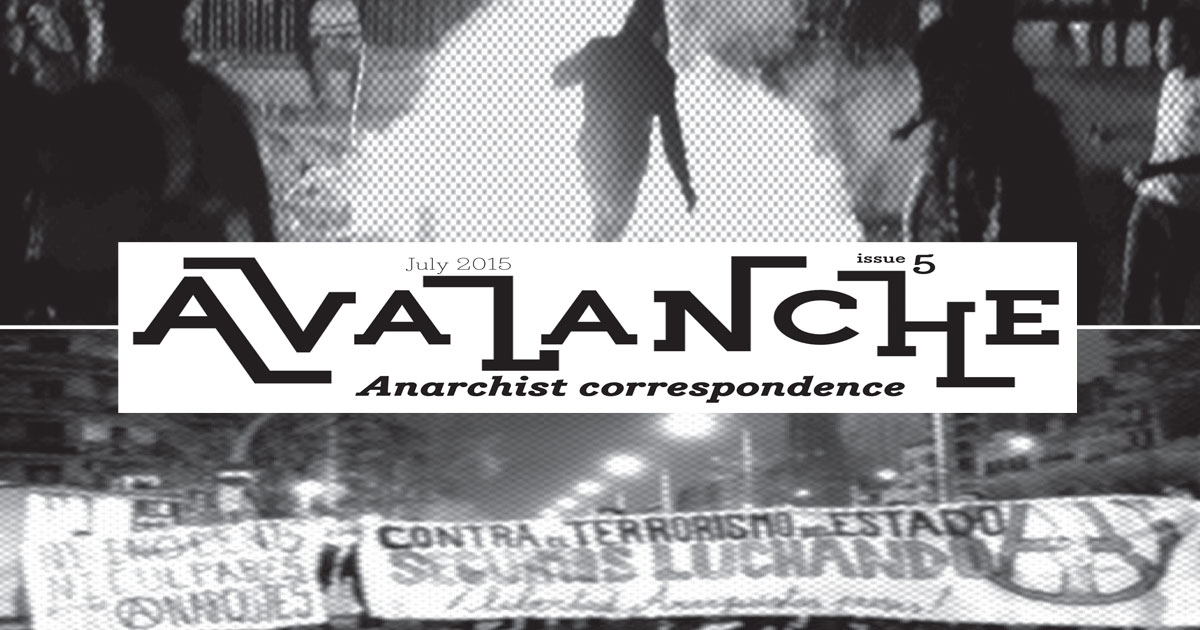 The fifth issue of the publication Avalanche was recently released. Avlanche is sub-titled a journal of “anarchist correspondence” and it contains a mix of theoretical and analysis pieces largely from the informal or autonomist anarchist tradition. In issue #5 there are reports from Mexico, Chile, Spain, Germany, Belgium, and Greece. While situated in specific geographic locations, the pieces point towards an international practice and have relevancy beyond their immediate context. There are some especially important pieces that ask large strategic questions about how to respond to changes in capitalism, in the state, and repression. It’s very much refreshing to see writers initiating conversations about contemporary events rather than rehashing the theory and analysis of years past.

To be or not to be anarchist, has never been the central question. Because a radical critique of authority can not be captured in an identity or an adjective. It is a never ending dynamic of practice and theory of critique aimed at the subversion of society. Anarchists and anarchist struggles can not subtract themselves from this critique. This publication was conceived as a tool for exactly this; a space for thoughts about the ways to make the anarchist critique potentially subversive, to immerse it into a dynamic of analysis and actions. The projects of struggle (or interventions of anarchists in struggles) are the experiences we need to share, to understand and to evaluate. The texts written on these bases are the contributions we think necessary for a correspondence that reinforces an anarchist and radical critique of society.

Each issue has been translated into a variety of languages (generally English, French, German, and Spanish). There’s a lot to read in the previous issues, much of it is very much worthwhile. Check them out at avalanche.noblogs.org.