This is our monthly round-up of anarchist zines and pamphlets published in June of 2018. We do these posts each month with the goal of increasingly the visibility and circulation of these zines and highlighting the diversity of thought that exists within the broad anarchist space. As always, we don’t necessarily agree or disagree with everything included in this post.

Past posts can be found here. We do our best to find new zines on our own, but if you want to give us a heads up for something to include next month, we always appreciate it.

Zines and Pamphlets Published in June of 2018 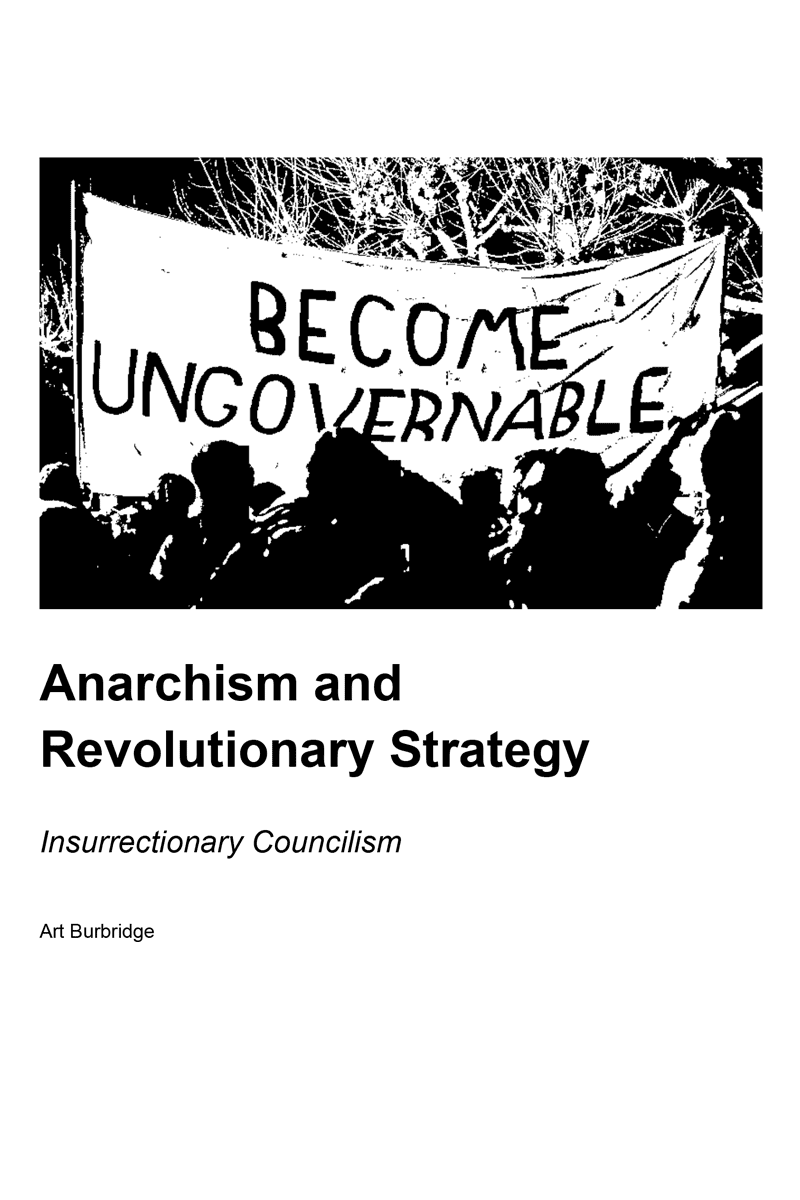 This zine contains the essay “Insurrectionary Councilism” published in May by the Radical Education Department. The Radical Education Department describes itself as “an autonomous collective training cultural warriors for a radical internationalist Left”. This strategy proposal is informed by that goal and builds on the ideas articulated in a 2017 essay titled “The Insurrectionary Campus: A Strategy Proposal.” The zine begins from the premise that “Anarchists are facing a historic opportunity” with the current “unprecedented outpouring of resistance in America.” It makes suggestions about how anarchists should orient themselves in light of this, with a focus on what the author calls “insurrectionary councilism.” This is defined in the intro as “creating radical, hybrid councils of delegates from the most radical anarchist and non-anarchist groups in a city for the sake of an experimental, federated, direct-action oriented system.” 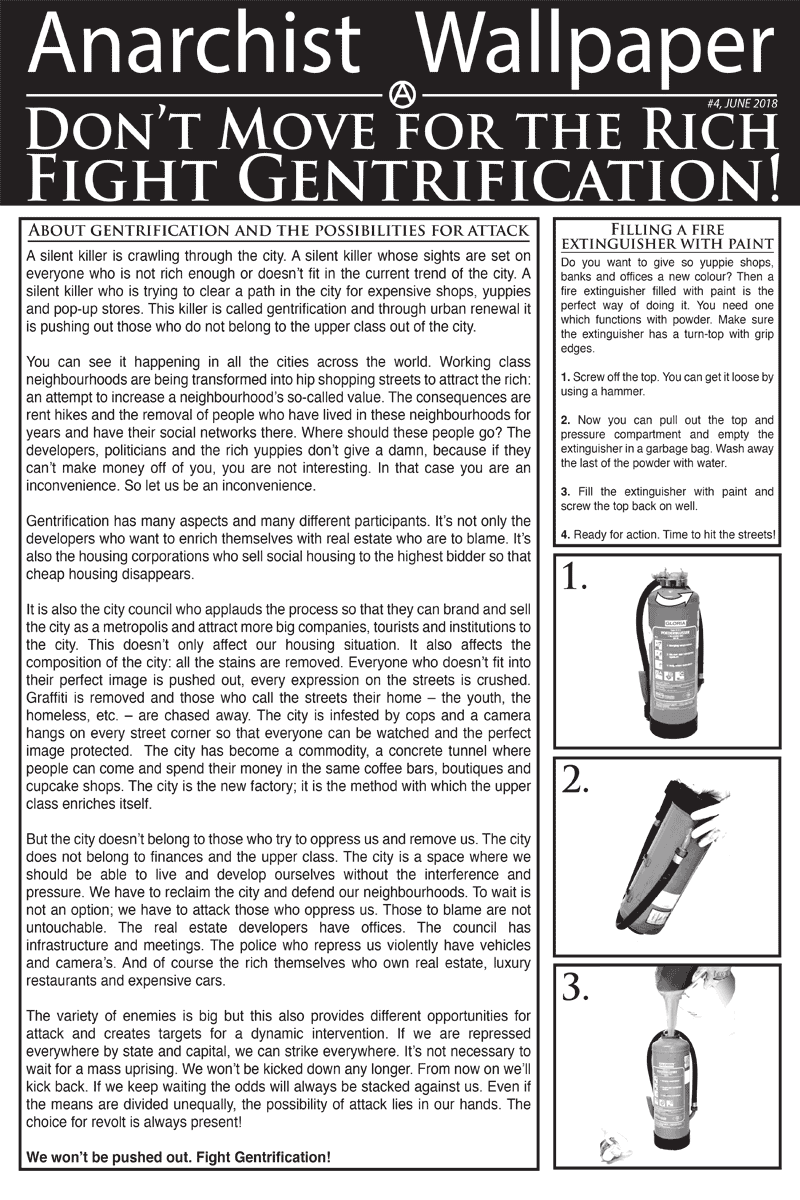 The Anarchist Wallpaper is an irregularly produced anarchist publication that is designed to be wheatpasted in public places. This edition focuses on gentrification and features the tagline “Don’t Move For The Rich! Fight Gentrification!” It includes a brief analysis of how gentrification works alongside instructions for filling fire extinguishers with paint and using them to decorate yuppie businesses. This is a unique way of presenting anarchist analysis and could have many applications. 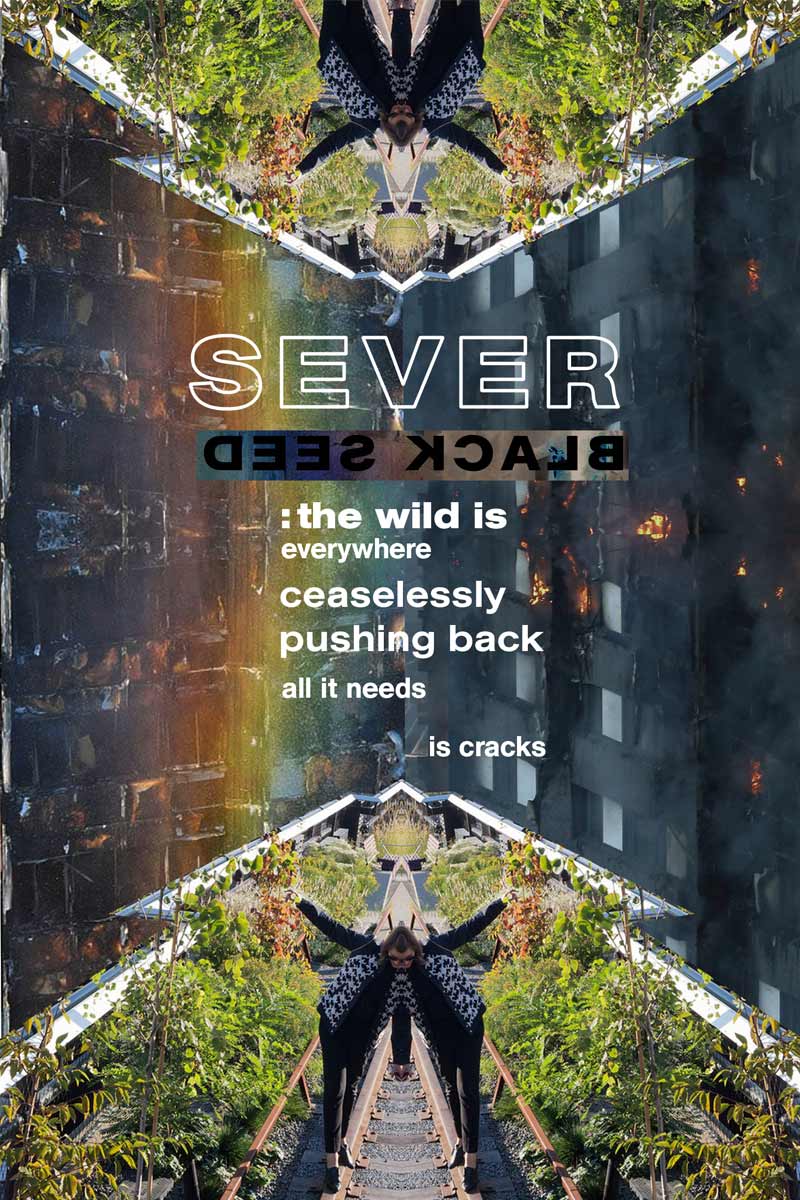 This collection published by underHILL Distro collects writings from Sever from the green anarchist journal Black Seed. The pieces (“Land & Freedom”, “Childhood, Imagination, & the Forest”, and “Against Self-Sufficiency, The Gift”) are very well-written and explore broad anti-civilization themes. Together they serve as a good introduction to anti-civilization anarchist theory and practice. They raise a lot of important points about how anarchists relate to the spaces in which they live. 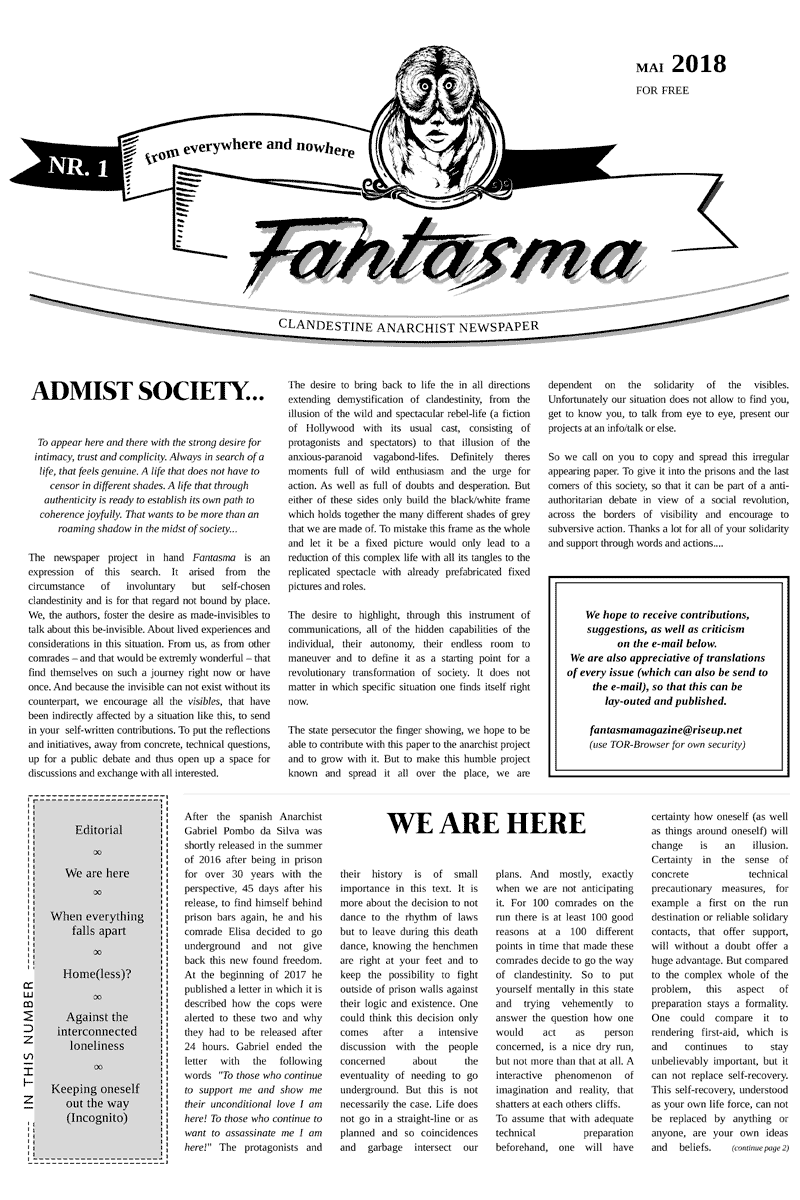 Described as a “clandestine anarchist newspaper”, Fantasma arose from “the circumstance of involuntary but self-chosen clandestinity”. It aims to open up a dialog between what they describe as “the invisibles” and “the visibles.” It features reflections on being clandestine, analysis of the current situation (especially focusing on the isolation of the modern techno-hell), and the necessity of acting in the present rather than waiting for some far away date when the conditions are somehow deemed sufficient. It also includes an excerpt from the book Incognito: Experiences that Defy Identification that collected essays from anarchists living in underground. 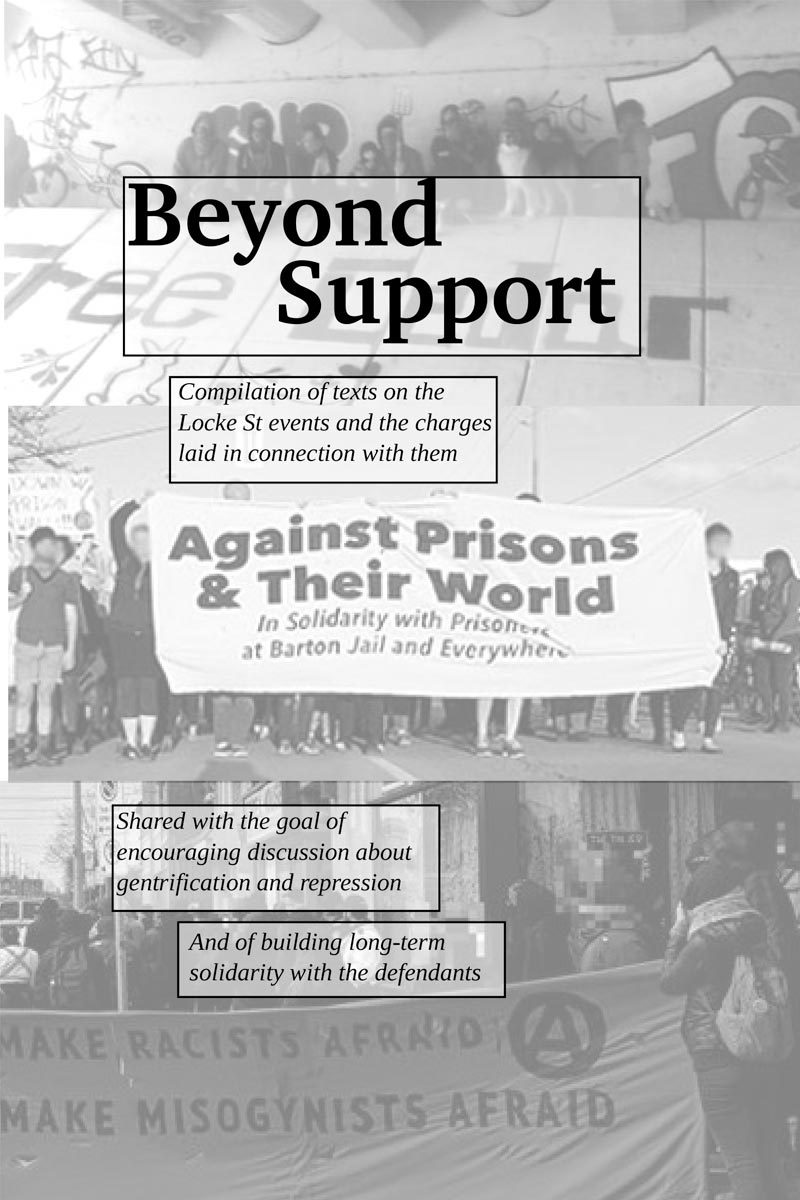 Sub-titled “A Compilation of texts on the Locke St events and the charges laid in connection with them,” this zine features a number of different writings that appeared online in relation to the March 2018 actions against gentrification that happened in Hamilton, Ontario. In response to a militant march involving property destruction, a number of anarchists were arrested. The title “Beyond Support” is based on the understanding that in situations like this one anarchists have a tendency to focus on support (which is of course essential), but that by focusing exclusively on support we often lose sight of the reasons that people acted in the first place. To that end, this collection of writings on the Locke Street events is aimed at facilitating discussions around repression and gentrification.

This is a collection of altered (or detourned as the Situationists would say) Felix the Cat cartoons published by The Slow Burning Fuse. Instead of whatever Felix the Cat usually would be talking about, the speech bubbles have been altered to have Felix the Cat sharing anarchist sentiments. It’s useful as an example of how anarchists can get creative in conveying their ideas. We don’t need to rely on analytical essays, manifestos, and dry writings.

Anarchy in a Small Pond 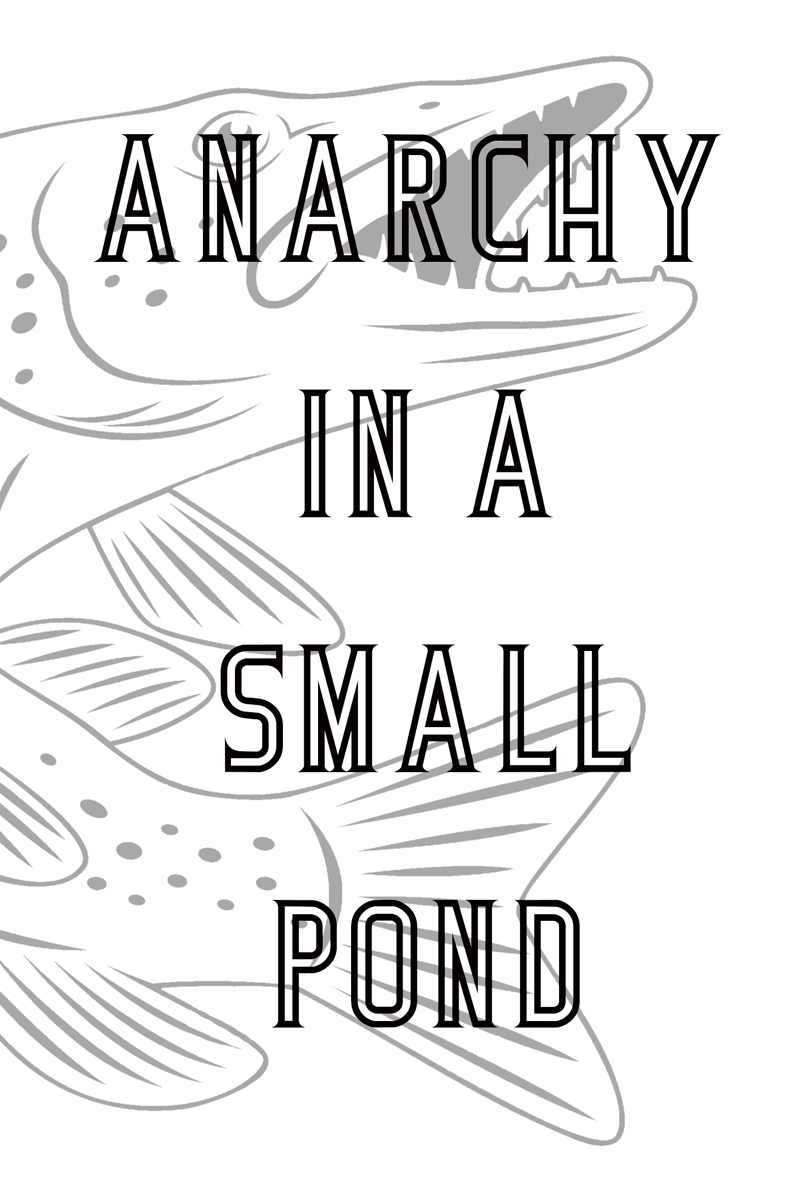 This zine focuses on “small city anarchy” and what it means to be an anarchist outside of the big hubs of anarchist activity. It grows out of a series of workshops and conversations hosted by two anarchists from Kingston, Ontario who wanted to have “discussion about both the challenges and advantages of anarchist projects and struggles in smaller cities and rural areas.” A lot of the reflection will likely resonate with people living in smaller places while it could also offer some helpful perspectives to anarchists who live in larger cities. Overall, this zine is a useful addition to the conversation around small town anarchy (other zines discussing the topic include “The Spaces Between” and “Small Town Organizing for Anarchists”) what anarchy can be in practice.

Live from the Trenches… Letters from the Vaughn 17 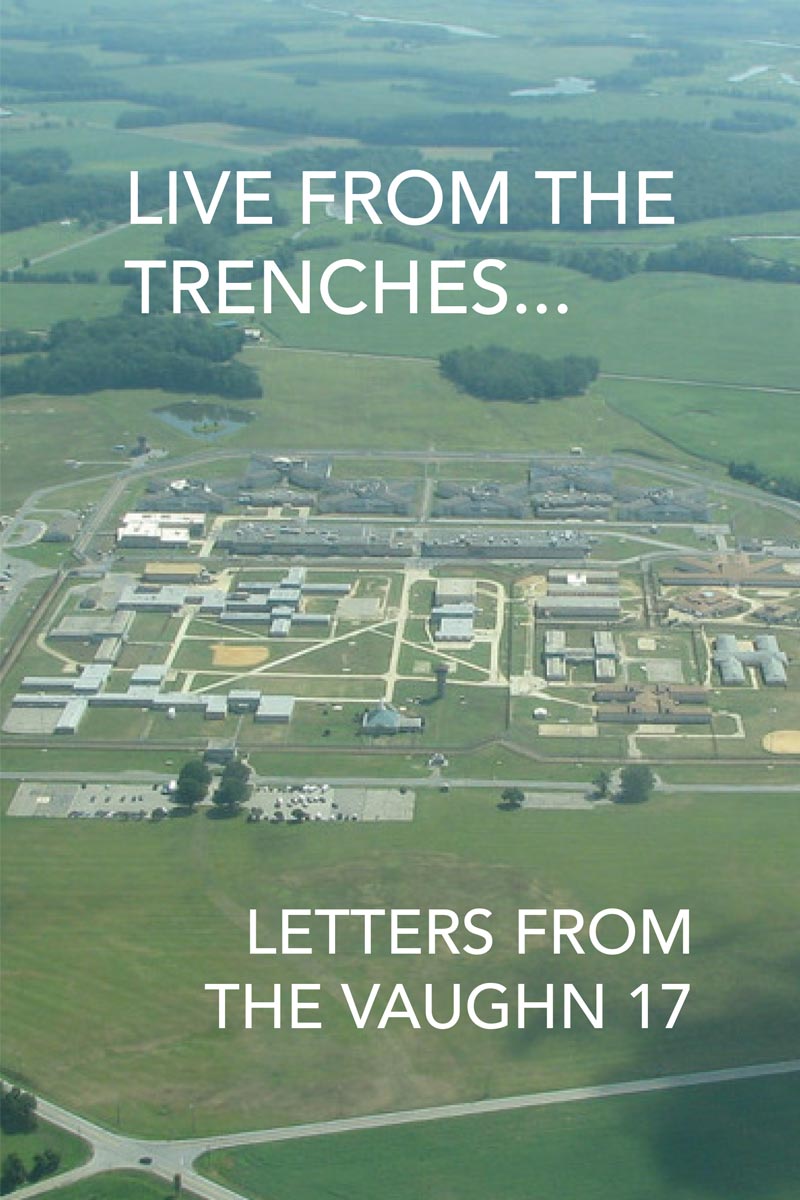 This zine was produced by the Chicago Anarchist Black Cross to elevate the voices of prisoners who were involved in the February 2017 uprising at the James T. Vaughn Correctional Center in Delaware. It includes letters solicited by Chicago ABC that share the experiences and thoughts of the individuals who engaged in the rebellion. Beyond the letters, there is background material on the rebellion and a list of ways people can support the Vaughn 17. The zine was put together with the goal of deepening connections with the Vaughn 17 and expanding solidarity, so it definitely check it out and consider how you might be able to support them. 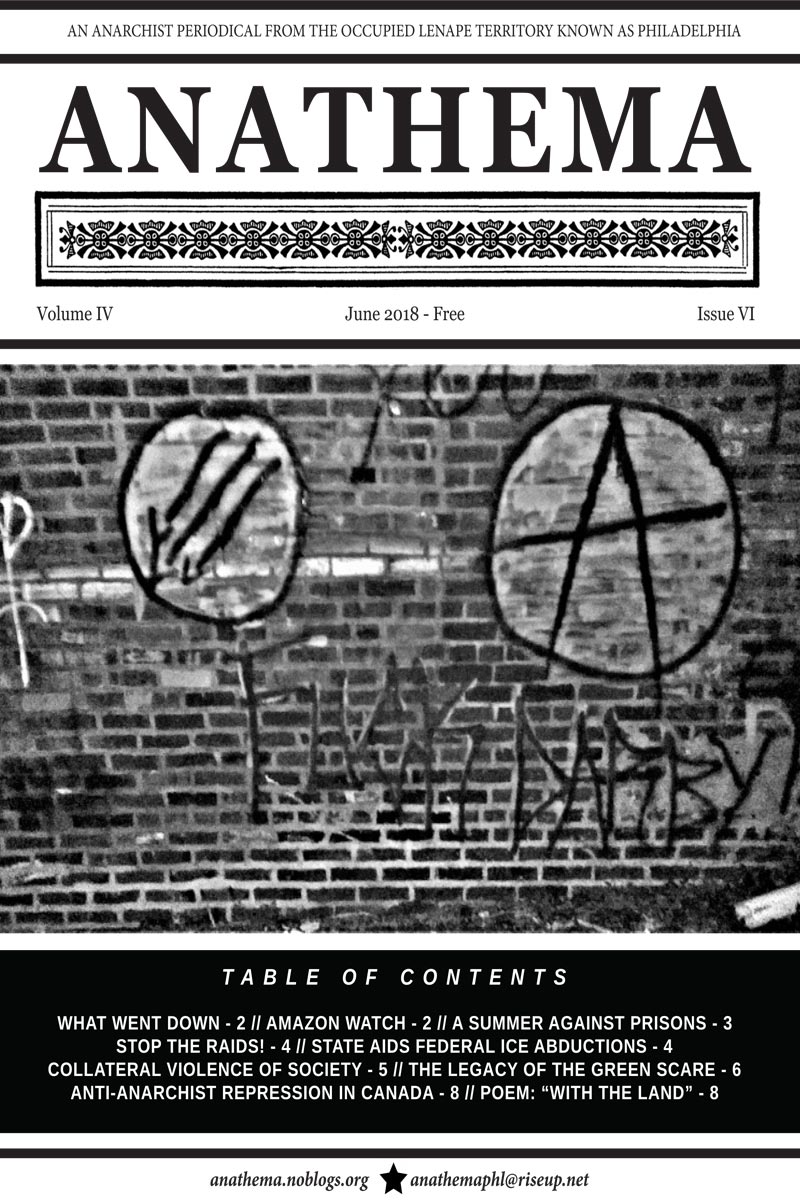 This is the June issue of Anathema, a counter-information publication out of Philadelphia. It has the usual write-up of anarchist actions in the Philadelphia area titled “What Went Down”, updates on the city’s efforts to court Amazon, and news about ICE raids. There is also a piece titled “The Legacy of the Green Scare” which offers some important reflections on the wave of repression in the mid-2000s commonly referred to as “The Green Scare.” There is a lot to learn from that history and this text is a good starting point. 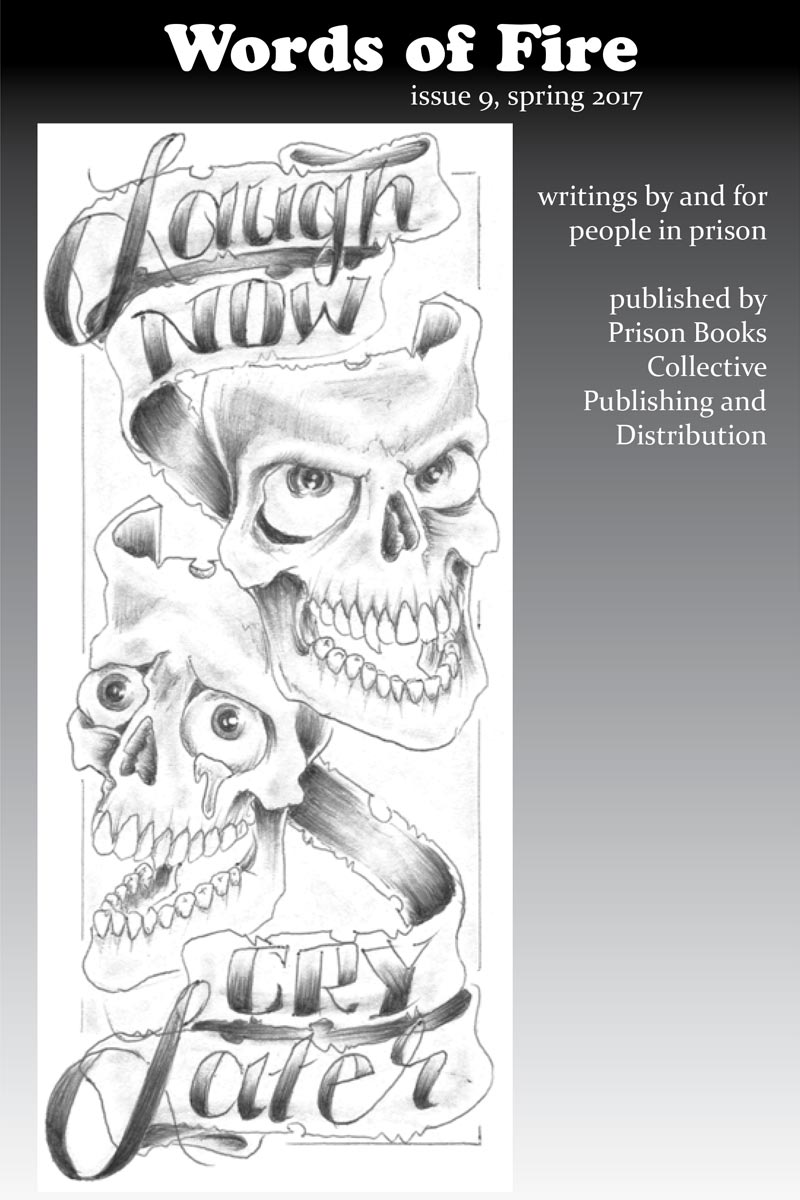 This is the latest issue of the semi-regular zine of prisoner writings published by the Prison Books Collective. They had this to say about it:

It was actually completed in May 2017 and we’ve been sending it into prisons for the past year. We’ve just been slow to post it on our website. It includes some great poems and essays, along with beautiful drawings!! Although many of the submissions are from North Carolina and nearby states, our cover images was drawn by someone from a prison in Oregon! 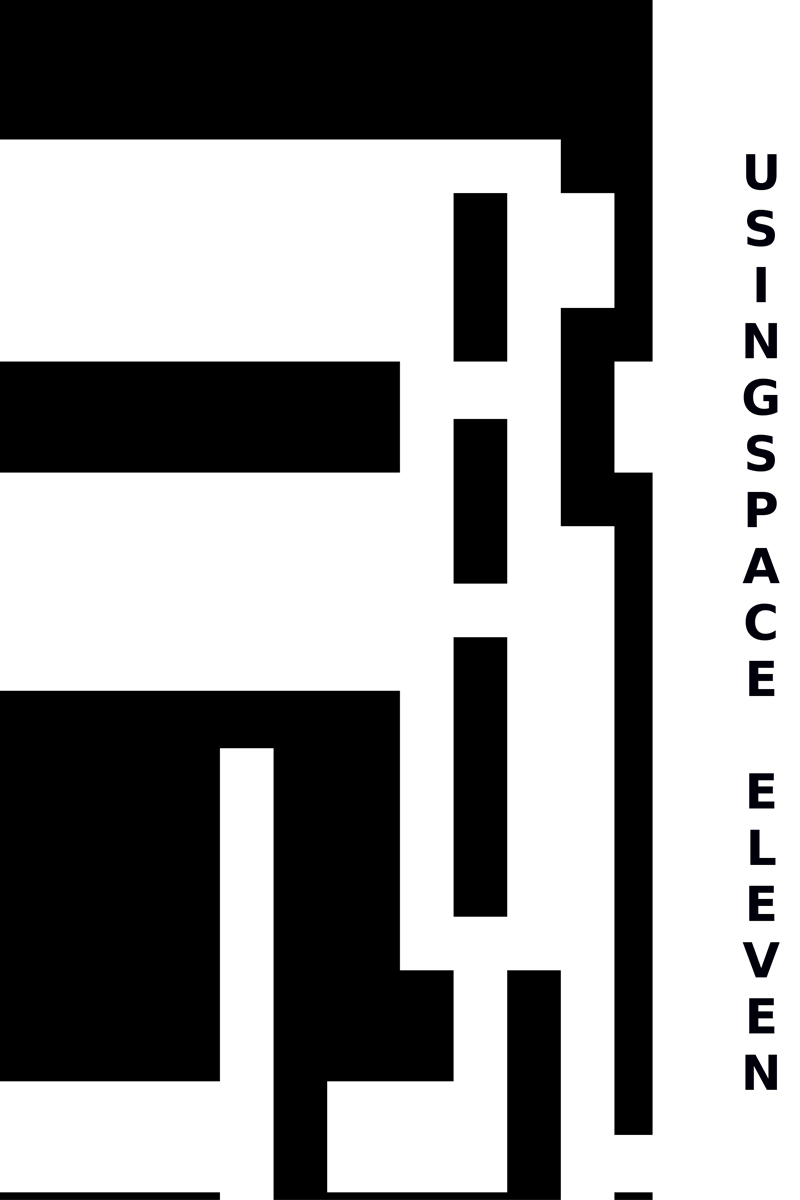 This is the latest issue of the long-running Using Space, which is a zine “about squats, social centres and alternative ways of living.” This issue features a long interview with a squatter from Rotterdam in the Netherlands. The interviewee talks about their experience squatting in Rotterdam as well as their insights into the squatting scene, their understanding of politics, and how they understand repression. The zine concludes with a list of resources for people wanting to learn more about squatting in Europe.