First off, sorry for not publishing one of these round-ups for the past two months.

Second, we’d like to encourage people to get into the habit of producing zines. While the trend towards using the Internet as a primary means of communication (particularly as “outreach”) for the anarchist space has been happening consistently over the past decades, it seems that noticeably fewer zines and publications are being produced. There could be any number of different reasons for it, but we find it to be disappointing. We would hope that the lack of publishing is due to anarchists living in face-to-face communities on their own terms, experimenting in autonomy or perhaps in active conflict with the state. Unfortunately, our hunch is that anarchy is ever more absorbing the both the patterns of communication informed by social media and its underlying logic (performance, a quest for likes, an accelerated pace of tweet/retweets/etc).

If you do decide to create a new zine or start a publication, let us know so we can include it in our next round-up. Thanks to all the folks who took time to publish the zines featured below and thanks to everyone who uses these posts to send zines to prisoners. 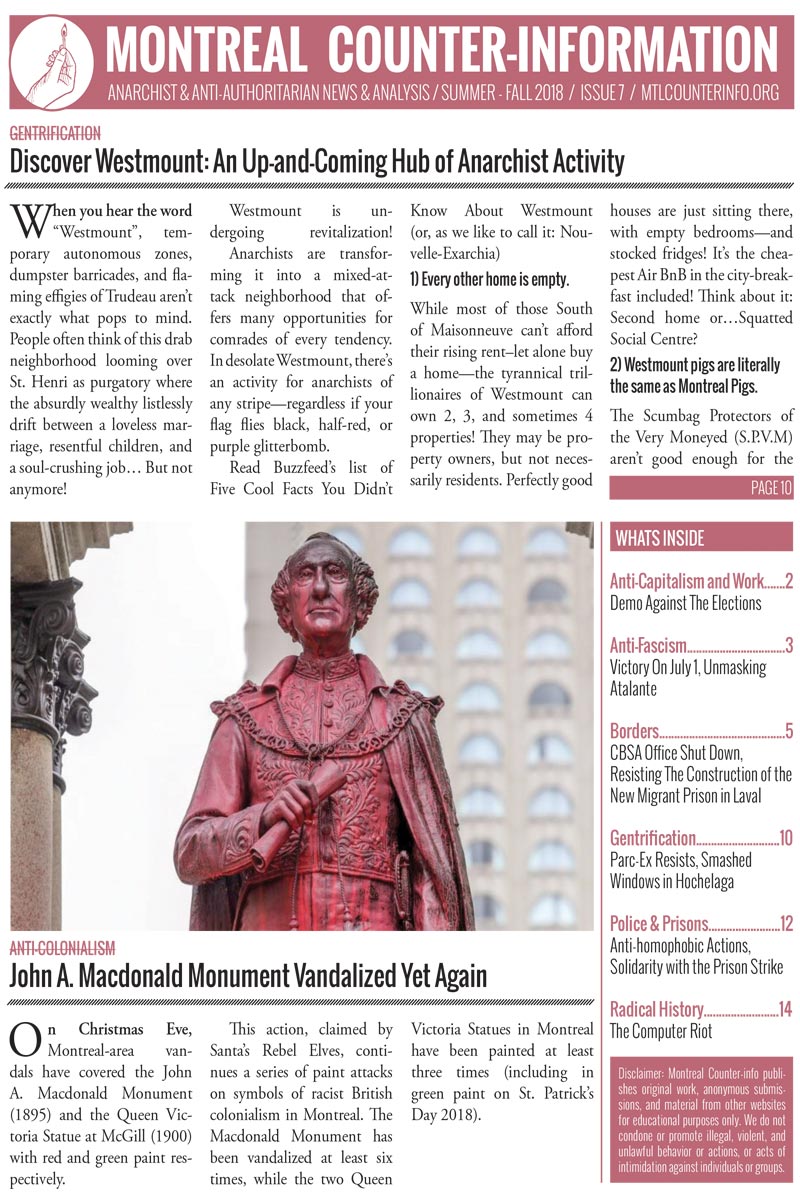 This is the latest issue (fall of 2018) of the Montreal Counter-Information publication which collects articles, communiques, and reports originally posted on MTLCounterInfo.org. As such, the publication is a reflection of a range of anarchist activity in the city that includes anti-gentrification efforts, anti-fascism, acts targeting prison and immigration detention, etc. It’s always an interesting read. 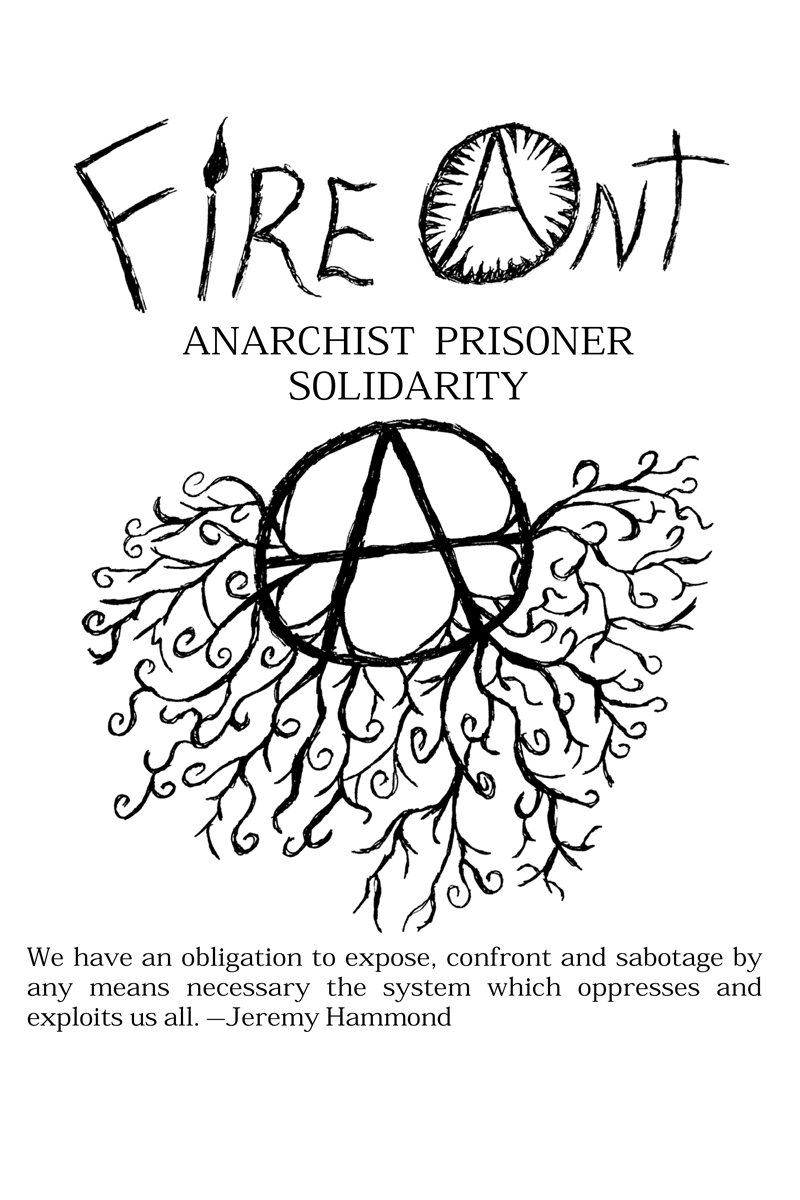 Build the Revolution: Anarcho-syndicalism in the 21st Century 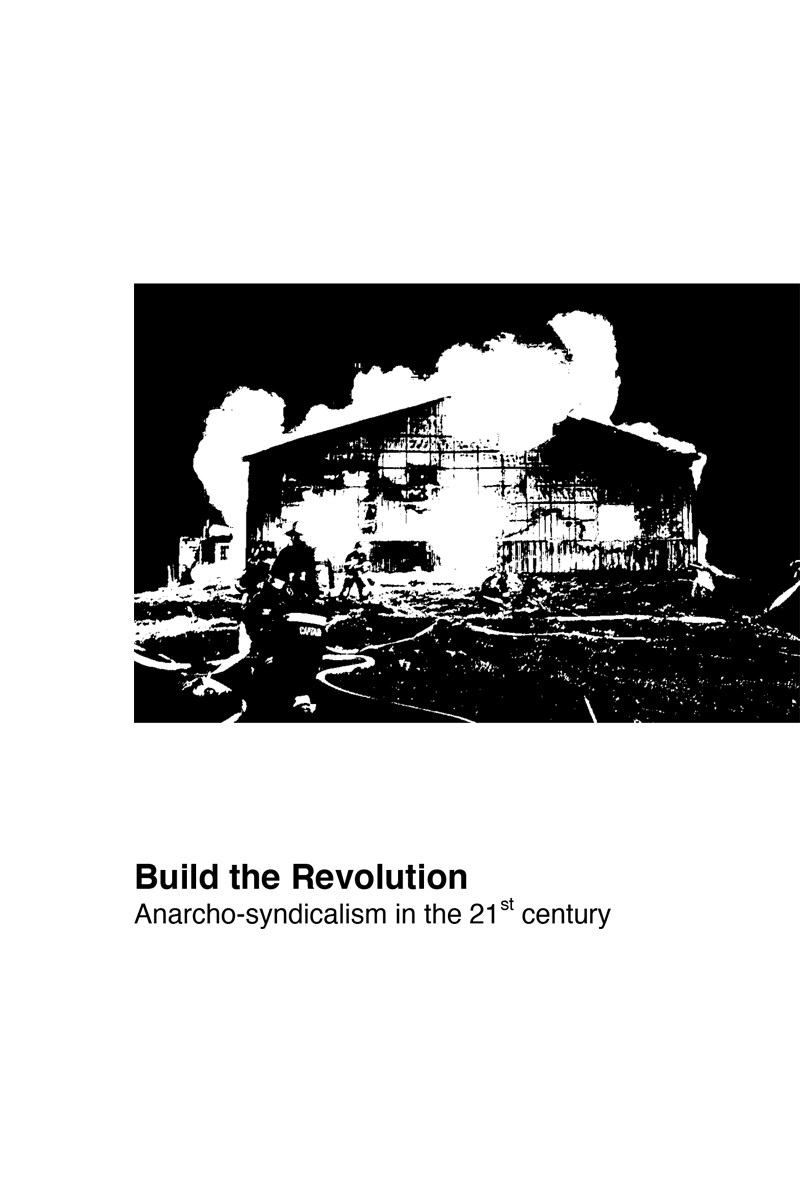 Back in November of last year, some anarchists produced a zine called “Nothing Left to Syndicate: Against the Democracy of Work and the Work of Democracy”. Despite decades of strong critiques of the failings of anarcho-syndicalism coming from within the anarchist space, the zine somehow proved to be controversial and set off a series of back-and-forth pieces in which anarchists argued (yet again) about anarcho-syndicalism and the fabled Spanish Revolution (apparently not everyone has read Workers against Work: Labor in Paris and Barcelona during the Popular Fronts). “Build the Revolution: Anarcho-Syndicalism in the 21st Century” is a zine that attempts to focus on what anarcho-syndicalism offers “the radical left” in terms of building a movement. Kudos to the authors for taking the discussion off the Internet.

Our Grief is a Starting Point in the Fight against Fascism 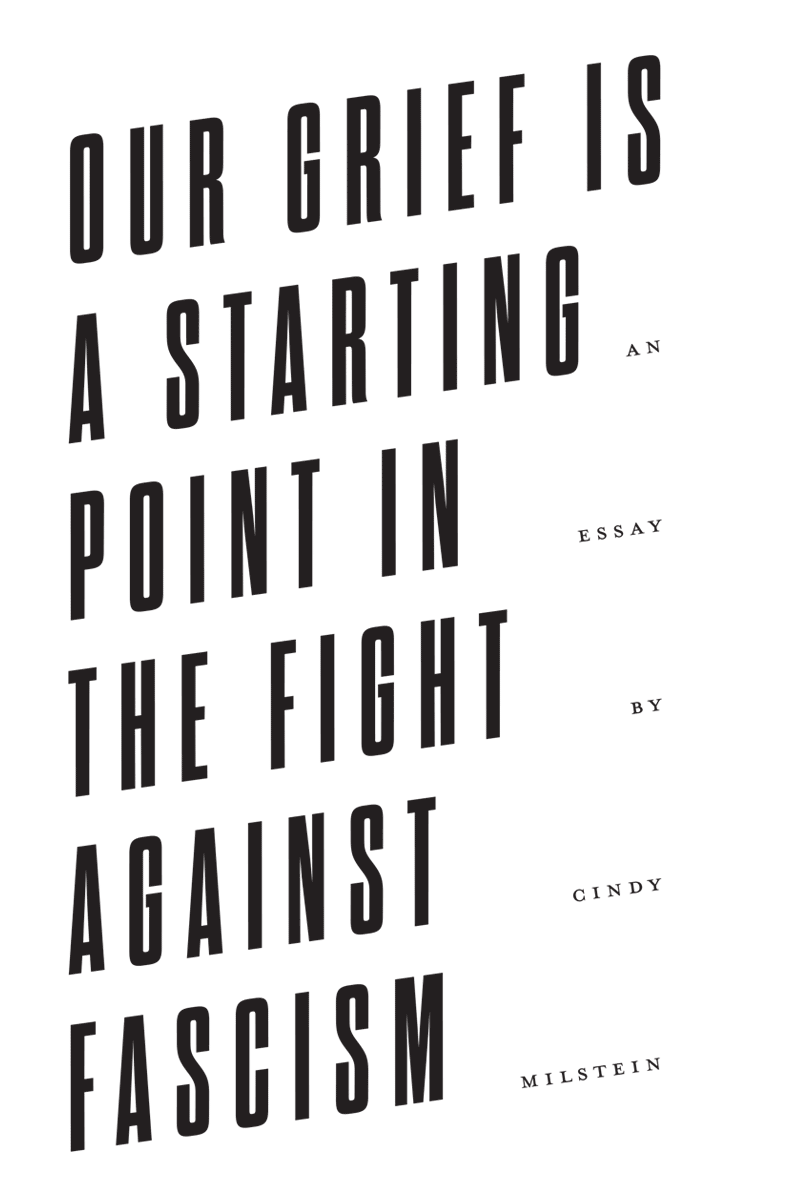 This short zine, designed by Eff Charm, features an op-ed piece written by Cindy Milstein for Truthout.org in response to the Tree of Life Synagogue murders in Pittsburgh in late October 2018. It looks at, to quote from the zine, “reclaim[ing] our capacity to be fully human in all our messy beauty and specifically, as counter to this messy, ugly time period. We can self-determine to mourn and organize together.” 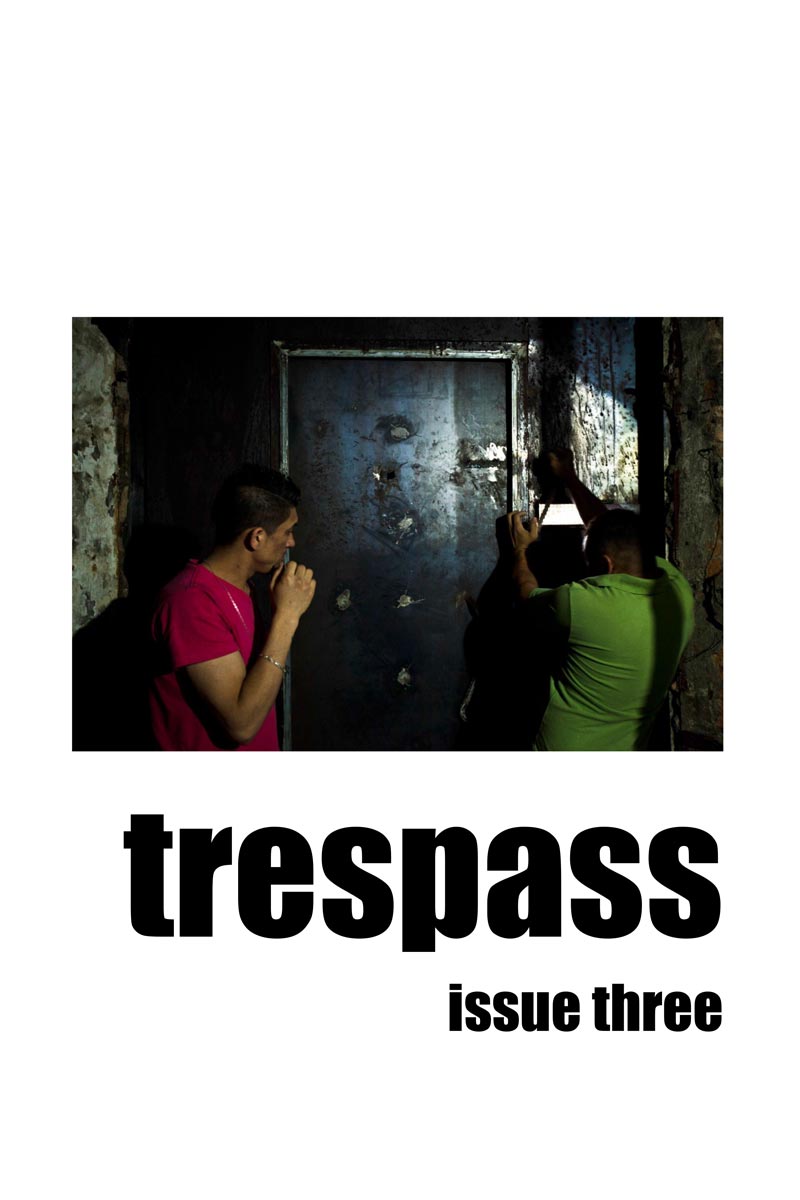 Tresspass Journal is an international zine featuring news and analysis about the squatting movement. From the introduction:

As interventions in five languages, we have an analysis of the lack of support to the ZAD in Brittany, plus short pieces about the opening of a new anarchist social centre in the Paris suburbs, community resistance to preserve a park in London, the demolition of a community gym in Athens, an (unsuccessful) eviction threat in Catania, and an eviction in Catalonia. And a report on the resquat of the watertower in Utrecht! There’s plenty more news and analysis on our website, trespass.network.

The language diversity contained in this issue mirrors the commitment we have been putting in towards overcoming the dominance of the English language and creating a journal that goes beyond borders.

Standing on the Land to Stand Up Against Pipelines 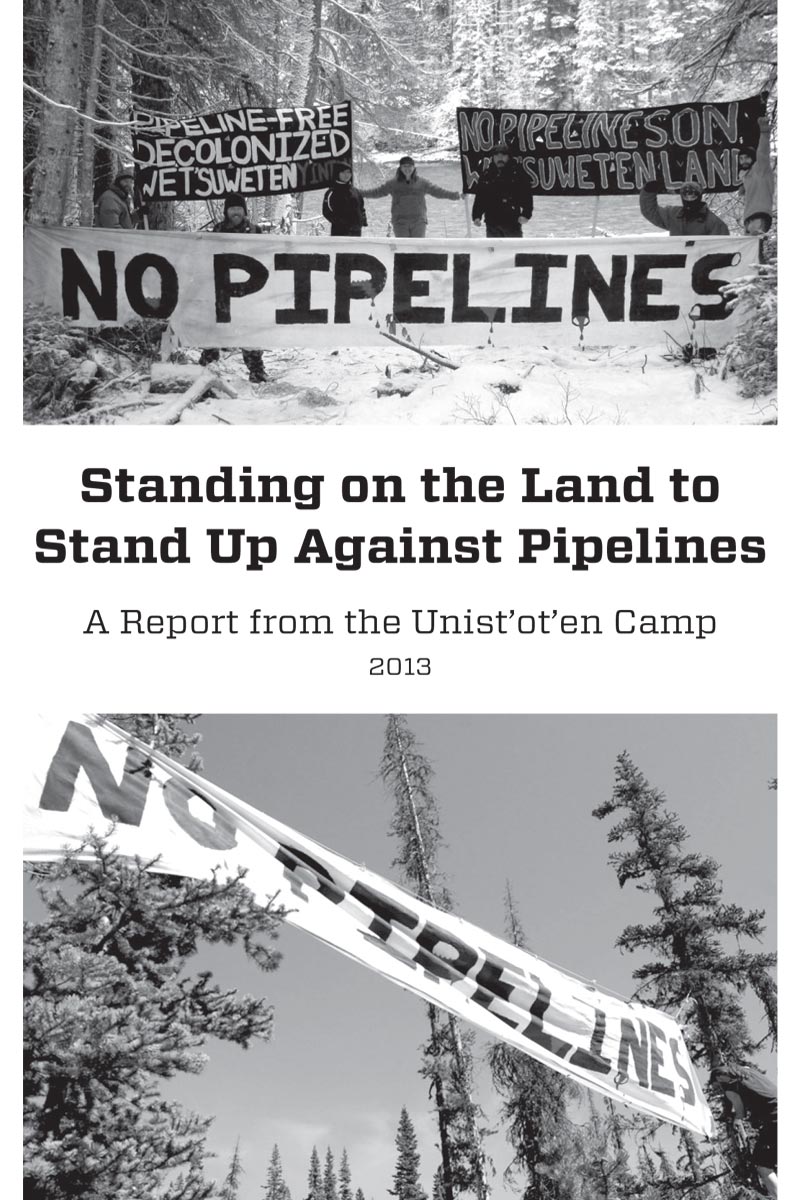 This article tells the story from the perspective of the Unist’ot’en and their allies at the Unist’ot’en Camp through the winter of 2012-3; it has been collectively produced by both indigenous and settler voices. It recounts the development of a common front including the Unist’ot’en and anarchists and other proponents of grassroots resistance, describes the pipeline projects they are intent on thwarting, and explores the complex relationships that have arisen in the course of this struggle. 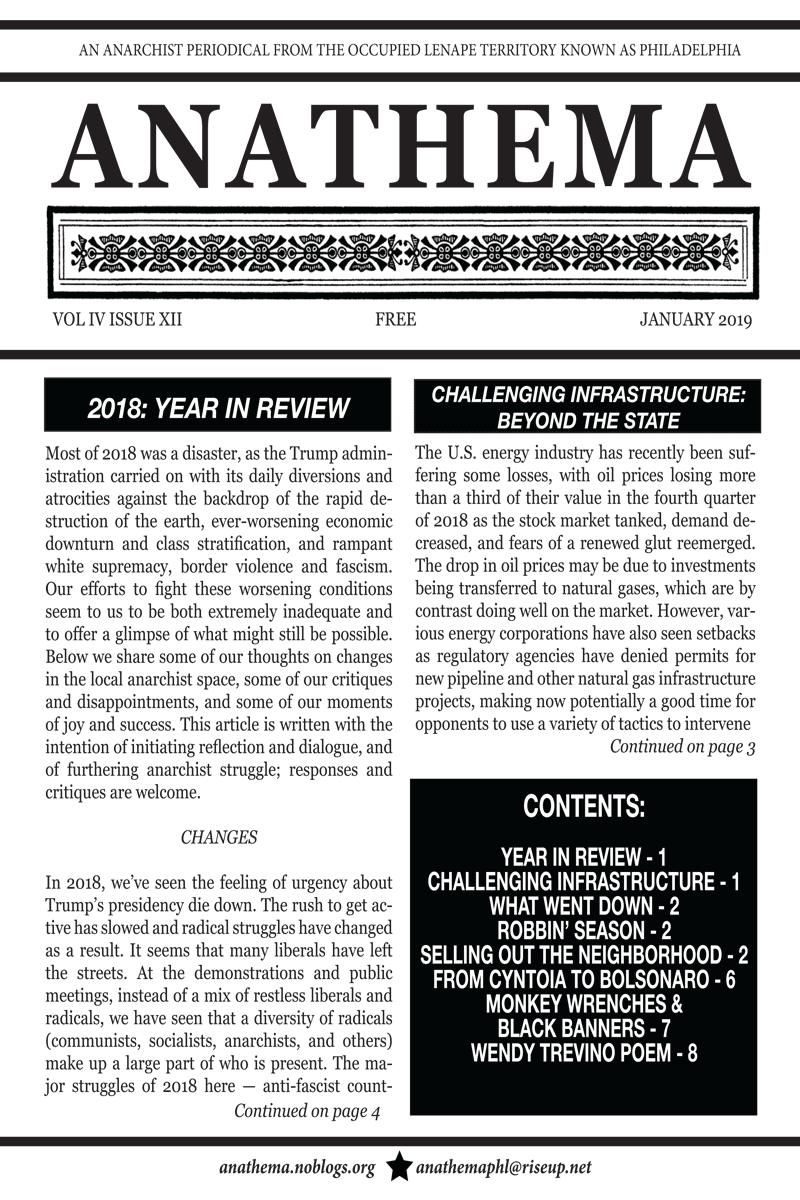 This is the latest issue of Anathema, a regularly publication out of Philadelphia. This issue feature the usual chronology of actions and reporting on local news (including holiday robberies and the shady dealings of a local Councilmember). The core of the issue is a 2018 “year in review” piece that offers a detailed analysis of what anarchists have done in Philadelphia over the past year. It focuses on both strengths and shortcomings. Hopefully folks in other places can match both the level of analysis and activity.