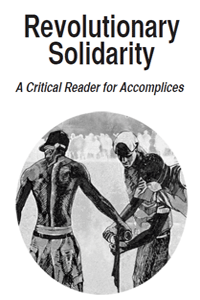 This zine comes out of the post-Ferguson debates about race, ally politics, identity, solidarity, and rioting. The zine presents a number of important readings on the topic including “Accomplices Not Allies,” “Ain’t No PC Gonna Fix It, Baby,” “On Non-profit Certified ‘White Allies’ and Privilege Theory,” “Outside Agitators,” and others. This is an essential zine that compiles many of these previously published pieces into one volume.

In seeking oppressed groups to take direction from, white folks of­ten end up tokenizing a specific group whose politics most match their own. “What does the NAACP [or Critical Resistance, or the Dreamers] think about this?” Likewise, they may latch on to the most visible “leaders” of a community because it is quicker and easier to meet the director of an organization, minister of a church, or politician representing a district than to build real relationships with the people those leaders purport to represent. This approach to dismantling racism structurally reinforces the hierarchical power that we're fighting against by asking a small group to represent the views of an entire category of people with radically different lived experiences.