This comprehensive guide explains the how and why of hunt sabotage aimed at saving wolves. With an increasing number of states (including Michigan) allowing for the hunting of wolves, this zine outlines one response. From the inside: “Hunt sabs are an effective tactic at stopping, inhibiting or drawing attention to the massacre of wildlife. Hunt sabs most often include direct intervention and are meant to disrupt a hunt. Actions can take the form of a blockade comprised of dozens of people at the office where wolf hunting permits are sold, or along roadways where hunters are engaging in hunts. But it also includes powerful propaganda, such as flyering communities before a hunt, or sharing this manual at your local NRA meeting and outside permit offices.” 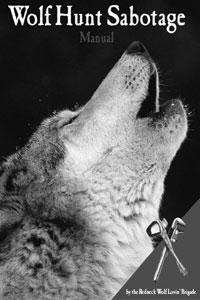