The Worst Mistake in the History of the Human Race

This zine is a reprint of an essay by Jared Diamond that explores the ways in which the development of agriculture had a detrimental affect on humans. Diamond argues that for most of human history humans supported themselves as hunter-gatherers and that the development of agriculture brought a number of negative impacts in terms of health, class divisions, and warfare. 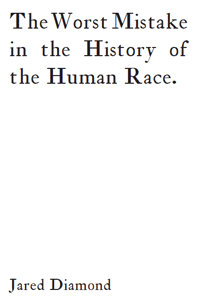 Hunter-gatherers practiced the most successful and longest-lasting life style in human history. In contrast, we're still struggling with the mess into which agriculture has tumbled us, and it's unclear whether we can solve it. Suppose that an archaeologist who had visited from outer space were trying to explain human history to his fellow spacelings. He might illustrate the results of his digs by a 24-hour clock on which one hour represents 100,000 years of real past time. If the history of the human race began at midnight, then we would now be almost at the end of our first day. We lived as hunter-gatherers for nearly the whole of that day, from midnight through dawn, noon, and sunset. Finally, at 11:54 p. m. we adopted agriculture. As our second midnight approaches, will the plight of famine-stricken peasants gradually spread to engulf us all? Or will we somehow achieve those seductive blessings that we imagine behind agriculture's glittering facade, and that have so far eluded us?