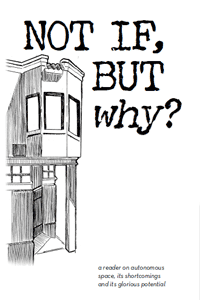 This zine—subtitled “A Reader on Autonomous Space, its Shortcomings and its Glorious Potential”—compiles three essays that look critically at the tensions that surround squatted and occupied autonomous spaces. The essays come from Europe and while the context is considerably different than what is encountered in North America, the questions raised about the relationship between autonomous spaces and legality are worth considering. The zine was originally compiled when the HotMess/RCA Compound in Oakland was under threat of eviction, with the editor(s) sharing the zine as a way to “…sharpen our practical analysis, to fuel our conversations at the barricades, to galvanize our spirits with the liberatory potentials” around occupied space.

No struggle for space is, in and of itself, capable of attacking the whole of patriarchal, white supremacist, capitalist society. Starting from the humble compound, armed with our friends and our analysis, how can we expand the struggle for this space into a struggle that necessitates the destruction of the entirety of society’s misery and oppression? Furthermore, in our defense of the space, how can our practice of friendship articulate itself as a practice of revolutionary solidarity?